Marcus Pode: From Malmo To Trelleborgs 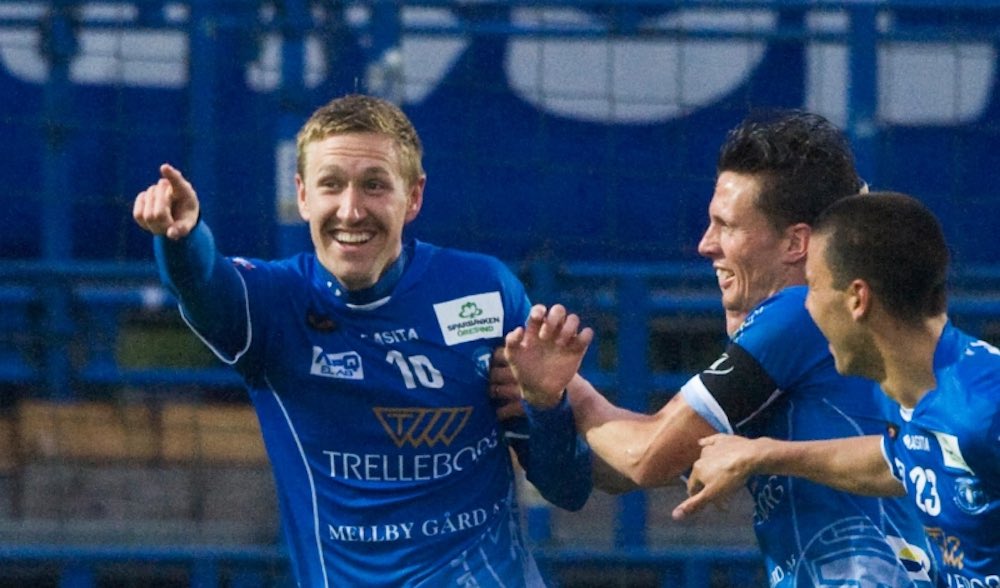 James Rowe spoke to Trelleborgs striker Marcus Pode for WFi. They discussed coming through the youth team at Malmo, his experience abroad in Denmark with FC Nordsjaellend, and representing his country at under 21 level.

You returned for a second spell at Trelleborgs. How are you enjoying being back at the club and how would you describe the club?

I am enjoying being back at the club. I had some years where I was moving around Sweden and playing for other teams, but I decided to come back mostly for my family situation.

Trelleborg is just 20 minutes from Malmo where me and my wife are from, so it’s close. I had three good years during my first spell at the club and I was excited to return. During my first spell my goal was to get them into the Allsvenskan and we managed to do that in our second season which was good.

The club itself is a small club that recruits really well and there are not many big names here. They also give talented players a chance to show their worth.

The atmosphere around the club is one of a family feel also.

You also played for Malmo coming up through the youth team and breaking into to the first team. How do you look back on your time at the club and what were your highlights?

There were many highlights. I started playing for Malmo from the age of five and I went through all the youth teams before making my debut.

In my debut season I played 25 matches for the club. Malmo is the club closest to my heart. I grew up with the club and everything surrounding it.

To progress through the youth teams all the way up is something special and something that I will enjoy looking back upon when I retire.

Also playing in the Champions League qualification and what was then the UEFA Cup as well was fantastic.

I would like to ask you about your time abroad playing in Denmark for FC Nordsjaellend. How do you look back on your time at the club and playing in another country?

My time at FC Nordsjaellend was not a disappointment, but it was a hard time as I sustained some injuries and did not manage to hold down a spot in the starting eleven, although when I arrived I played a lot during my first six months at the club.

It taught me, going through the hard times, to keep working hard and believing in myself, to go on and get more chances to go and play my football back in Sweden and prove myself.

You have had a solid career so far. Could you say who are the best players you have played alongside in your career in terms of talent and ability?

I have been fortunate to play with many very good footballers. The biggest talent I would say would be Labinot Harbuzi.

We were born the same year and played together at Malmo but unfortunately he passed away 6 months ago.

He also played in the Netherlands and Turkey and he was an extraordinary talent.

I also played with Patrick Andersson. I would also say that the Brazilian player Alfonso Alves was the best player I ever had the opportunity to play with.It’s no surprise that I played with a lot of those players at Malmo.

You have represented Sweden at U19 and U21 level. How do you look back on your time representing Sweden at this level?

To represent your country is what you dream about when you are a child and you want to play for the national team.

I had the opportunity to do that at youth level and unfortunately at my time we did not qualify for major tournaments the European Championships for example.

There was a time when I was playing for Nordsjaellend in Denmark where I was not playing regularly and was therefore not selected for Sweden.

We had a great opportunity to qualify for a major tournament when we played against Serbia. I was playing for the Swedish under-21 side at the age of 17, and I remember that we won 3-0 away in Serbia and at home we lost 5-0.

That Serbian under-21 team at the time were very strong, and unfortunately I never had the opportunity to play in the under 21 European Championships.

Finally Marcus are there any particular managers you have had in your career so far that have been influential for you in terms of advice, or managers that have perhaps been keep to your development as a professional footballer?

I have been lucky to have had a lot of good managers along the way. My manager at Malmo, Tom Prahl, gave me the opportunity and chances to play for the first team, and he had a big influence on me and gave me tips on how to improve and what to think about. That helped me to become a better player.

I would say Tom Prahl is the main manager in that respect, in terms of senior football, but when I was in the youth set up at Malmo I had good coaches and I would mention Roland Johansson in that regard.