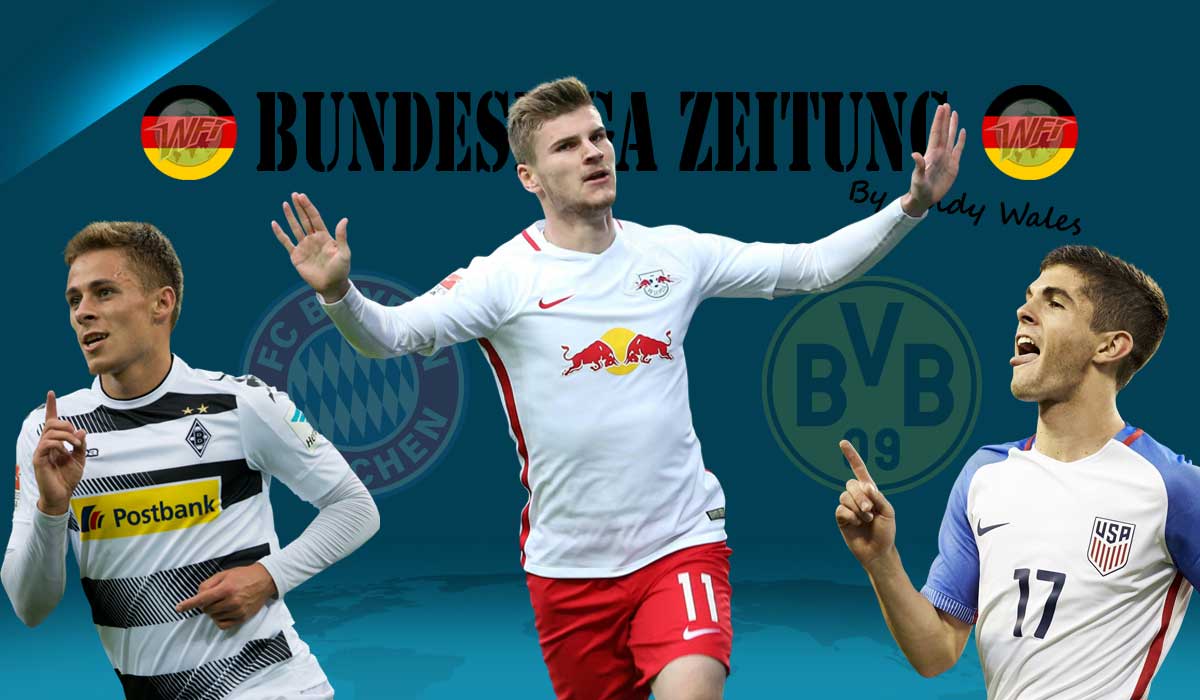 Finally, after almost a month, the winter break in the Bundesliga is about to end. It means the drama on the pitch will resume after an eventful couple of weeks off it.

The January transfer window was barely ajar before the first big news broke. The future of Borussia Dortmund’s young winger Christian Pulsic had long been the subject of rumour. Various Premier League clubs had shown interest in the United States international, particularly during his impressive displays last season.

With just 18 months remaining on his contract, the offer of €64m from Chelsea was enough for Dortmund to agree to his transfer. Pulisic posted a nice message to Dortmund fans on social media and will get the opportunity to show his appreciation on the pitch, as he remains at the Westfalen on loan until the summer.

It seems Dortmund will not look far for his replacement. Thorgan Hazard at Borussia Mönchengladbach is the man topping their list and a deal is looking increasingly likely for a fee rumoured to be around €40m.

Thorgan may not be as famous as his brother, Eden, but he has been catching the eye this season and could be a fantastic summer addition to this young and exciting Dortmund squad.

Another player with the “exciting” tag is the highly-rated 19-year-old Argentine defender Leonardo Balerdi, who Dortmund have signed for a fee reported to be around €16m from Boca Juniors.

Germany and RB Leipzig forward Timo Werner had also been linked with a move to the Westfalen; but BVB CEO Hans-Joachim Watzke publicly admitted that deal won’t happen, stating he had settled his future and it is “not with us”.

If rumours are to be believed, Werner’s future lies at the Allianz. Those are the hints coming from the Werner camp and members of the German press with strong Bayern connections believe the deal will be done this summer.

Dortmund’s Hans-Joachim Watzke hints that Timo Werner may have already agreed a deal with Bayern Munich, to RN: "I know at least eighty players who would suit us well, but at least I have the impression that one of the two players has already settled his future- and not with us."

If he does make the move, he will join VfB Stuttgart and France defender Benjamin Pavard. Bayern sporting director Hasan Salihamidzic announced Pavard will officially become a Bayern player on July 1st, with the fee believed to be €35m (£31m).

Bayern have also been tracking Pavard’s international team mate Lucas Hernandez since last summer and although he would come with a hefty price tag, it’s expected Bayern may finally get their man from Atletico Madrid.

Add to that the public pursuit of Chelsea teenage winger Callum Hudson-Odoi, whom Salihamidzic spoke so glowingly of, and it’s clear Bayern are stepping up their rebuilding program.

Bayer Leverkusen’s stylish and hugely promising attacking midfielder Kai Havertz has also been talked about as a possible big-money target this summer for Bayern. It has to be a concern for the rest of the Bundesliga that the two biggest clubs are flexing their muscles already.

This Friday the focus switches back to matters on the pitch as Hoffenheim and Bayern kick off the rückrunde. I’d actually say it’s a defining few weeks ahead for those at the top and bottom of the table.

All the talk of signings coming in and players such as Franck Ribery, Arjen Robben, Mats Hummels and Jerome Boateng expected to depart this summer, it feels like Bayern have rediscovered a purpose.

The squad transition that needed to start sooner than it has is finally beginning to gather pace, but all the ins and outs haven’t happened yet so it’s up to this squad to end their era on a high. Things began to settle under Kovac before Christmas and although his long-term future as coach is unclear, the champions did finish the “hinrunde” looking strong.

Bayern rebuilding for the future, & their future is looking bright #FCBayern pic.twitter.com/w97zFIGN7K

Bayern are the only serious challengers to Dortmund for the title, but it’s important they get a positive result at Hoffenheim to ensure they keep the leaders within reach.

For Dortmund, it’s essential they hit the ground running but face a real test as they travel to Leipzig on Saturday. Lucien Favre’s side were crowned Herbstmeister by being the league leaders at the winter break and usually that team goes on to become champions.

However, with Bayern regaining confidence and form, they can’t afford their six-point cushion to erode as they face a different type of pressure and expectation.

Marco Reus and Jadon Sancho have been in exceptional form this season and the goals of Paco Alcacer have been important to their campaign. This will need to continue this attacking threat over the coming weeks as they face some tricky games.

Navigating recent defensive injuries could be a factor too, but if they can successfully get through the first five games back, you’d expect them to go on and win it.

Borussia Mönchengladbach had a fantastic first half of the season and sit in third position, but I can’t see them replicating that form for the rest of the season and I expect them to soon be looking over their shoulder at those behind them.

That includes Leipzig, Hoffenheim, Frankfurt, Wolfsburg and possibly even Leverkusen. With no Europa League to contend with, Leipzig should be well positioned.

Frankfurt were the opposite in Europe, winning all their group games in impressive fashion but that might cost them in the race for a Champions League spot.

I don’t think anyone expected Wolfsburg to be anywhere near contention at this stage, I know I certainly didn’t and you’d be much braver than me if you want to put money on them finishing in the top four.

Leverkusen were much fancied to do well pre-season, but their poor results and inconsistent form signalled the end of Heiko Herrlich as coach, replaced somewhat surprisingly by ex-Dortmund boss Peter Bosz. It will certainly be interesting to see how they perform under him and if he can show he’s better than his short tenure at Dortmund suggests.

At the bottom, Hannover and Nürnberg risk being cut adrift if they don’t close the gap to Stuttgart and Augsburg quickly.

Just above them are Fortuna Düsseldorf and Schalke, who will not want to get dragged into a relegation battle.

It promises to be an intriguing few weeks down there and it will be a battle that I will look at more over that time.

For now, it’s just great to have the Bundesliga back in what promises to be one of the most exciting in years.