Peter Hyballa On Working With Klopp And Bundesliga Ambition 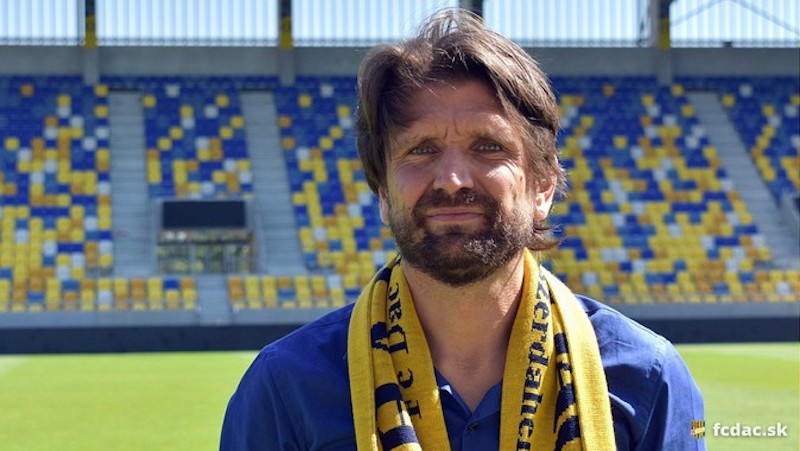 James Rowe spoke to Dunajská Streda manager Peter Hyballa exclusively for WFi. They discussed his move to Slovakia, time in the Netherlands, working with Jürgen Klopp, and ambition to work in the Bundesliga.

My first question Is about your current club. Are you enjoying your time there and how are you finding managing in Slovakia?

The facilities the club has are fantastic and I am really enjoying my time here so far.

FC DAC 1904 Dunajska Streda are a really interesting club. They have history, great supporters, and a great training centre.

I have a very young squad with a great owner who invests well in the club. We have broken a points record in the 114 year history of the club. We are currently second in the Fortuna Liga with a small chance of becoming champions.

For me after leaving NEC Nijmegen I was unemployed for a year and wanted to manage again. I am delighted with my choice to come here.

You managed Borussia Dortmund under 19s. How was it for you to work for such a big club and what did you manage to achieve during your time there?

My time at Borussia Dortmund was my best time as a manager so far. Borussia are an amazing club in a big region of Germany.

My second season as under 19s manager was with one of the best squads ever including Mario Götze and Antonio Rüdiger who went on to become Bundesliga players, and in the case of Mario Götze, World Champion.

We played played in two national finals In the league and cup when Jürgen Klopp was the manager of the first team. I managed to develop great players and I still have contact with many of them. All in all, a great three years.

Growing feeling in coaching circles that there is too much emphasis on passing and not enough on dribbling. Peter Hyballa and Bob Browaeys – two very smart coaches – expound on the theory here. https://t.co/XmDsGQDbSo

How was it for you to work alongside Jürgen Klopp?

Jürgen and I have great respect for each other. We also share the same philosophy and our coaching style is similar.

We are both emotional managers. Jürgen is now at Liverpool FC and is one of the most famous managers in the world.

I remember going to his office to tell him to take Mario Götze into the first team squad, and a year later he was winning the Bundesliga with them. Three years after that he was sold to Bayern Munich for €38 million.

You had a season as manager of Sturm Graz in Austria. How was it for you to be manager of such a club and how do you look back on your time there?

I must say that my time at Sturm Graz was a very emotional period. We had an aging team and we tried to rejuvenate the squad.

I also tried to create a new playing style to find a good mix. What was also interesting is how good the supporters of Sturm Graz are.

We managed to obtain a Europa League place through our league position. All in all I look back on a challenging and interesting time in Graz.

Your mother is Dutch, from Rotterdam. You speak fluent Dutch and you have a connection with the Netherlands. How was it for you to become manager of a Dutch club in NEC Nijmegen and how do you look back on your season there?

For me it was amazing to manage in the Netherlands, but I believe I had a bit of bad luck with promises which were made and players being sold, which resulted in us not having a lot of quality.

I must commend the way in which we played and we fought really hard. We lost games in the second half of the season which resulted in relegation.

I managed to train up some good players — Ferdi Kadioglu, now at Fenerbahce, for example.

It was an interesting period. Sometimes during the frustration of the fans I would often talk to them.

I am proud to have brought through many young players. On one hand it is history, and another I have gone on to become an Eredivisie expert for Dutch TV.

NEC Nijmegen is a great club with good supporters.

Found this video on YouTube and had to post it: Peter Hyballa as coach of NEC Nijmegen on the edge between being emotional in delivering his message and outright crazy. Coaching is a funny thing, coaches are funny people. pic.twitter.com/gbOJSRxMBh

You have worked in different countries and managed to make a good impression. What are your personal ambitions for the future?

I once said when I was under 40 that I want to be managing in the Bundesliga. I have also been assistant manager at Bayer Leverkusen and I am now managing in Slovakia.

I am half German, half Dutch, and to manage in the Bundesliga would be my goal.

I also find leagues such as the Premier League very exciting, as here in Slovakia I often speak English to the players.

At the age of 43 I had had success and difficult moments and I am happy where I am now at such a great club in FC DAC Dunajská Streda.

I will be honest with you, James, if a move to another club comes in with an offer of a fantastic job then fine, and if nothing comes up that is also fine!