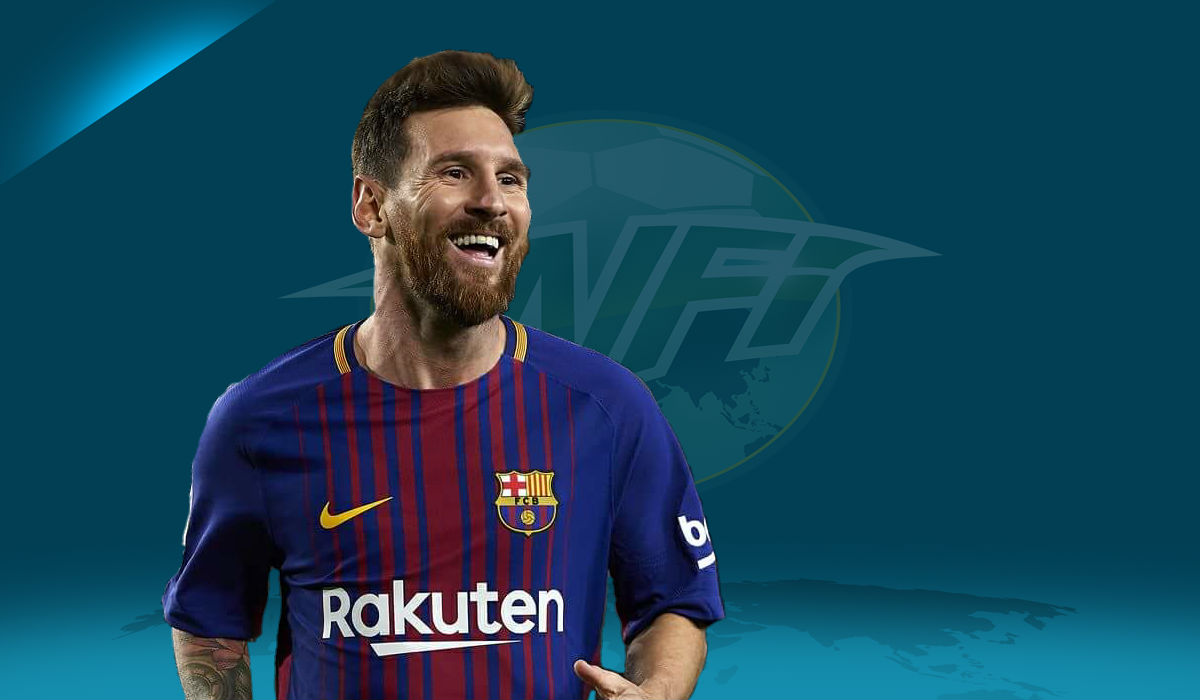 There were calls to rest the Argentine against Rayo Vallecano as a Champions League last sixteen tie with Lyon remains in the balance going into the second leg on Wednesday.

But Valverde wants Messi on the pitch at every opportunity. He likes watching his No 10 play football.

“Messi is a genius,” Valverde said after his star man scored twice against Alavés on the opening day of this season.

On that day Messi snuck a free kick under the wall to open the scoring, and it kicked off a season where the 31-year-old was free to go through his box of tricks as he sees fit.

“There’s still room for Messi to surprise us,” Valverde continued.

“He always surprises you and he never ceases to amaze me, honestly. I had no idea where he was going to put that free kick. No one did. It was like the one he scored against Girona last season. It’s not a common free kick but he does it often.

“He also scored a free kick against Alaves last year like his one in the first half tonight which hit the bar. That was a great effort. You have to be ready to expect anything from Messi because he sees what no one else sees.”

These may be quotes from an earlier game, but they apply to almost all of Messi’s performances.

His appearance in this game against Rayo meant he has now played one more game in La Liga than Andrés Iniesta, putting him second on the all-time list behind Xavi who turned out in the league 505 times.

Messi becomes the @FCBarcelona player with the second highest number of appearances in #LaLigaHistory! ❤🔝💙 pic.twitter.com/CzDzUfTHy0

Messi was in the lineup, and the magic began.

He began the game walking around the pitch, surveying this familiar land, but despite giving the impression of a man on a relaxing afternoon stroll, he was still finding space. land
This encourages his team-mates can get the ball to him, and once it arrives at his feet he bursts into life.

Positionally he was drifting. Under Valverde it’s like he plays a combination of every role he’s played during his Barcelona career popping up in midfield, moving up to centre forward, and out to the right wing. 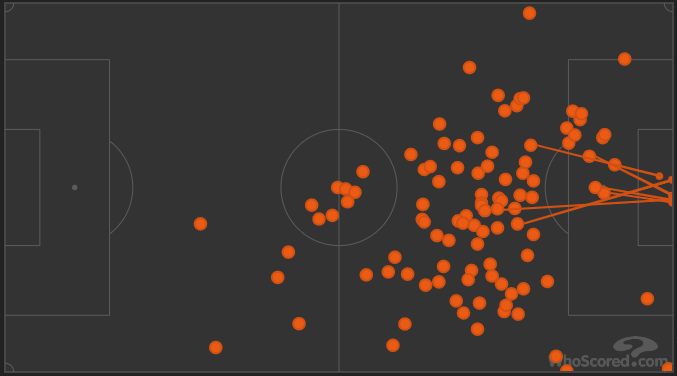 As soon as he gets the ball in midfield, at least one player (often Jordi Alba) will dart forward beyond the opposition backline as they know their team-mate’s playmaking ability is second to none.

He can also make the runs himself. His first shot on goal was a header from Sergio Busquets’ ball over the top, saved by Rayo goalkeeper Stole Dimitrievski.

…By this time Rayo had taken the lead through a goal out of nothing from Raúl de Tomás. The xG on this shot would have been low, like the strike itself, which curled into the bottom corner from outside the area. A moment for the on-loan Real Madrid 24-year-old.

That Piqué header levelled the scores, resuming the Messi show.

A familiar Messi moment which happens in every game he plays is the dribble forward which leaves opposition midfielders trailing in his wake.

After one such run here he fed Luis Suárez who tried to return to the ball to his team-mate but should have shot.

This happens fairly regularly with Suárez, who likes to be Messi’s one-two buddy when he should really shoot, and it happened twice in this game.

There was another moment of unbelievable dribbling, this time through the area, and though Messi may have been fouled on his way through he didn’t go down.

He lost the ball in the end, and the referee should really have awarded a spot-kick — this is why most players go down instead of trying to stay on their feet, but Messi isn’t most players.

He got his chance from 12 yards after Semedo was felled following good work with substitute Ousmane Dembélé.

It was game over in terms of the result, but not as a spectacle. Messi dispatched a couple of direct free kicks goalward, one of which prompted some unorthodox defending as Alex Moreno broke from the wall at the last minute, scampering back to head the shot off the line.

Another sailed just over, before substitute Ivan Rakitic combined with Suárez as the Uruguayan tapped in to make it three — there was no chance he was passing this.

Messi ended the game as he began it: observing.

Watch Barcelona’s third goal against Rayo if you can – it will go underrated. Messi stood just behind the play and watched it like an admiring professor. 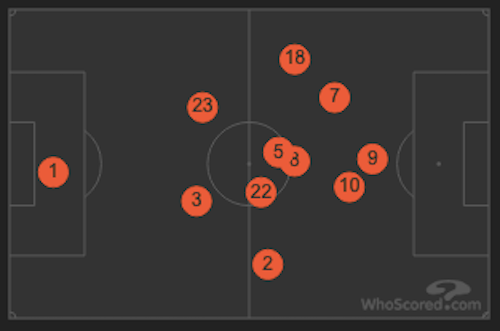 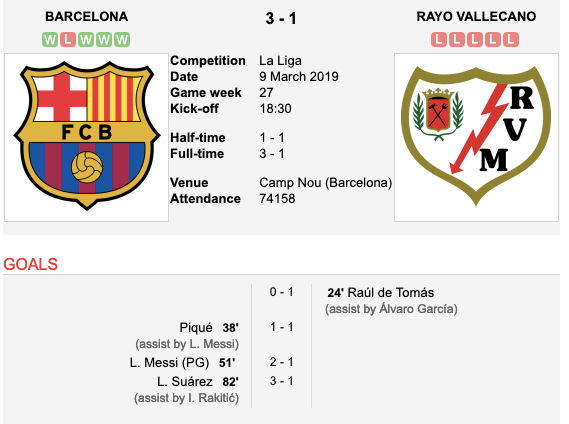 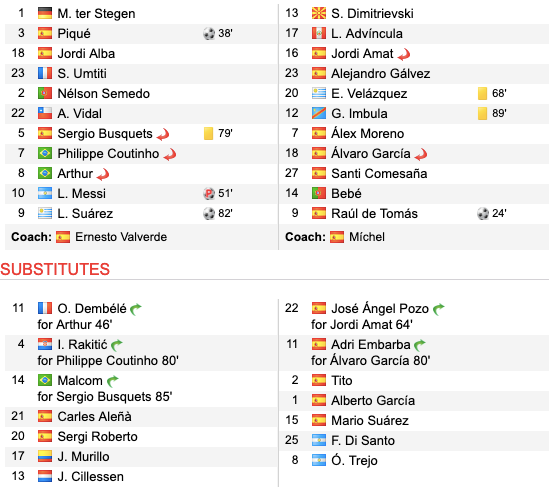