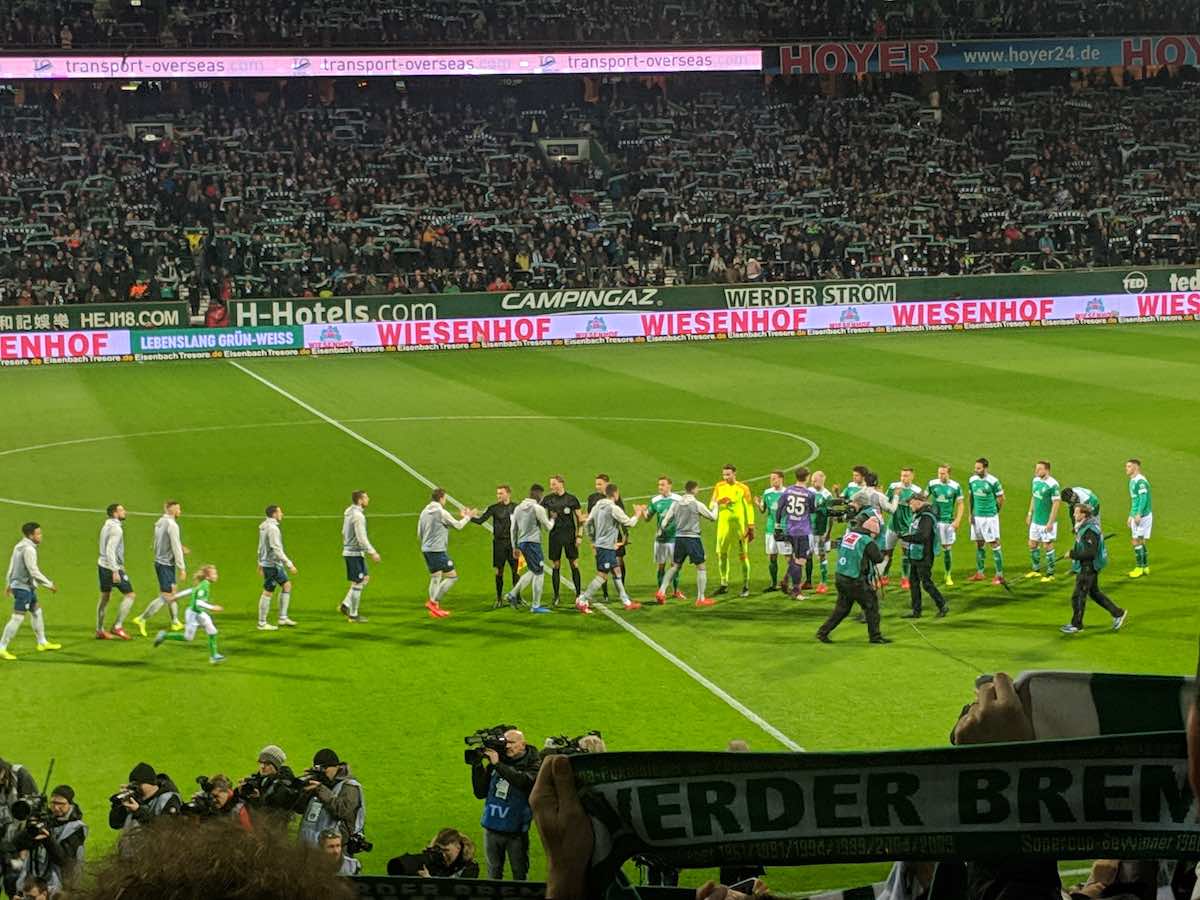 “I don’t think it’ll be a spectacle. It’ll be about breaking them down, but I’m sure that the atmosphere under the lights will play a part.”

The words of Werder Bremen head coach Florian Kohfeldt, a day before his side saw off Schalke at the Weserstadion on Friday night, edging themselves closer to a European spot, and putting Domenico Tedesco’s side in all sorts of trouble in the process.

Kohfeldt’s prediction was correct for the most part, and even if It might not have been a spectacle it was entertaining: six goals, a packed stadium and a great atmosphere under the lights.

To start, 40-year-old Bremen legend Claudio Pizarro made just his third appearance in a starting XI this season, but struggled to make an impact.

To finish, Pizarro’s replacement Martin Harnik saw off the threat of a Schalke fightback in the dying minutes of the game. 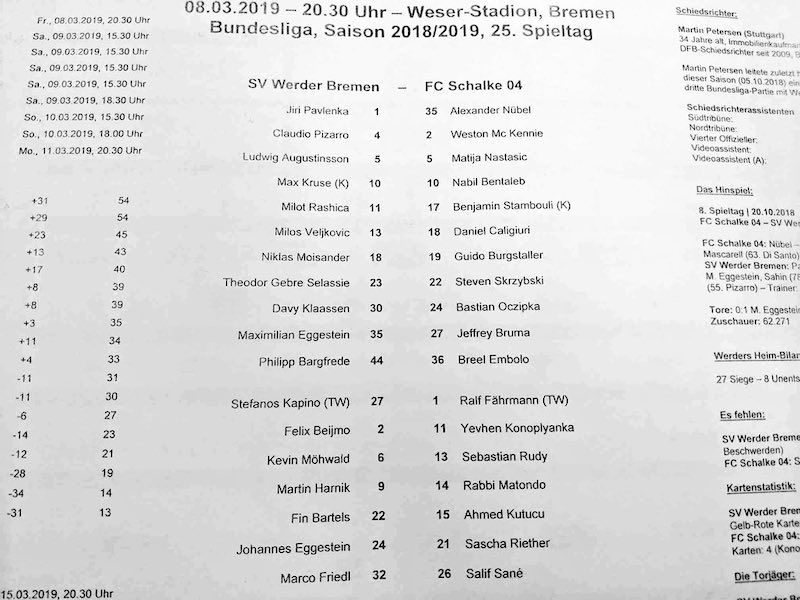 It’s a result which leaves Tedesco’s job in the balance and his side just four points ahead of the relegation playoff spot.

Current occupants of the 16th place, Stuttgart, face Dortmund this weekend so may not be expected to capitalise but, still, it’s not a good look for the Gelsenkirchen side who have lost their last four and are without a win in six.

It took Tedesco just over ten minutes to realise his initial plan may not be the best way to approach this game. Given Schalke’s precarious position, their boss can’t afford to wait for things to happen and hope for the best.

Weston McKennie, the 20-year-old United States international, is used as a target man throughout the pitch, roaming from his midfield position to wherever an aerial ball needs winning.

This route brought the opening goal as he nodded into the path of Breel Embolo who slotted past Jiri Pavlenka.

Tedesco’s change worked, but only temporarily. Bremen came back into the game against the run of play when Milot Rashica turned home a Max Kruse cross.

The visitors came out for the second half with an even more obvious reflection of the Bremen formation, which meant their wasn’t much time on the ball, or space in which to move for either set of players.

But Bremen went looking for the space, and a slither of unmarked territory was found by the lively Rashica down the right. He sent in a cross which caused trouble in the area, and trouble means VAR, and VAR means trouble.

It did so for Schalke. A penalty was awarded by referee Martin Petersen after consultation with the video referees and the pitch-side monitor — Jeffrey Bruma was adjudged to have fouled Kruse. The Bremen No 10 stepped up to take the penalty after the delay, stuttered during his run up, but was convincing with his strike as he sent Alexander Nübel the wrong way.

1⃣3⃣ – Max #Kruse took 13 penalties in the #Bundesliga and scored all of them – only Hans-Joachim #Abel (16) and Ludwig #Nolden (15) took more Bundesliga penalties without missing a single one. Iceman. @werderbremen_en #SVWS04 pic.twitter.com/HqMRSGJ3Tk

Rashica scored a second when Max Eggestein diverted Kruse’s cross into his path. It was a composed finish by the Kosovo international who took a touch, made the angle a little more favourable, and then struck beyond Nübel.

Schalke made the final ten minutes more interesting when Embolo nodded home a second from Bastian Oczipka’s corner, but substitute Harnik had the home fans celebrating a win, scoring on the break after Schalke had thrown almost their entire team forward for a last-gasp set piece. 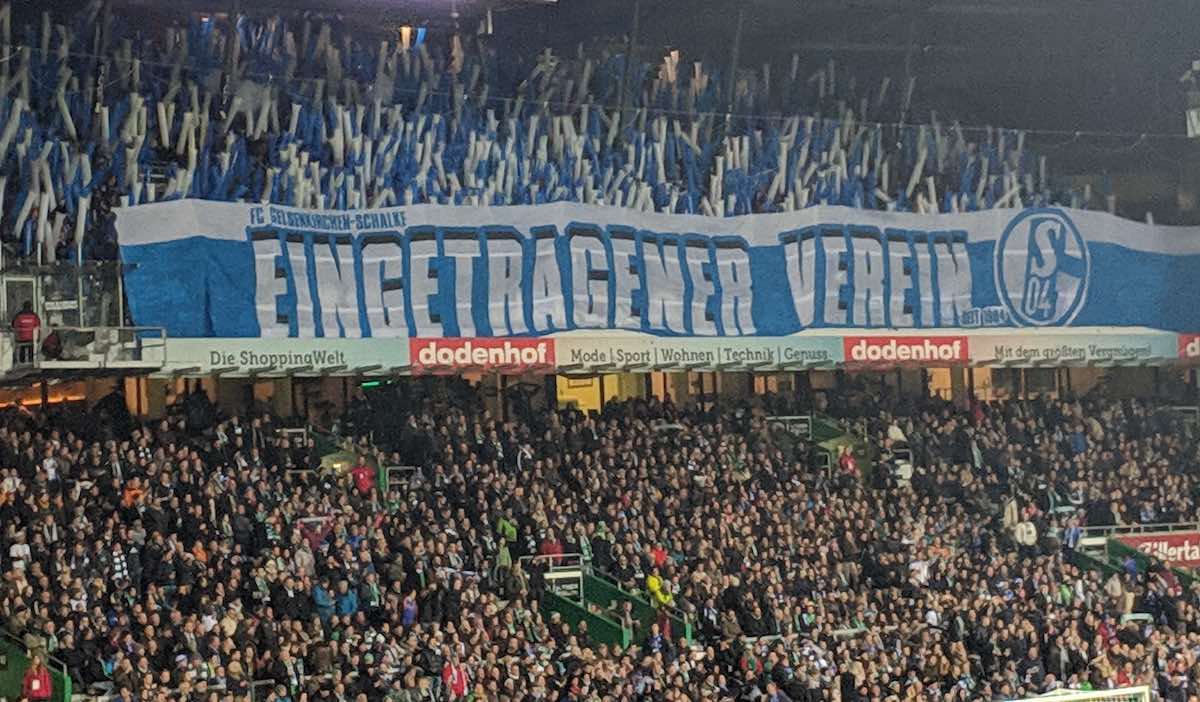 It might also be Tedesco’s last gasp as Schalke manager, but the club’s new sporting director Jochen Schneider spoke to the media after the game and gave the manager his backing.

The dreaded vote of confidence, or an acknowledgement that despite the win there were enough promising signs to stick with the Italian?

At this point of the season it might be difficult to find a new man to make a difference, but it might also be difficult for Tedesco to turn things around.

But Bremen are looking up, now eight unbeaten, and the celebrations will go on into the night.

Werder Bremen players celebrate with the fans after their 4-2 win against Schalke. #Werder #SVWS04 pic.twitter.com/sNkNx1gJvq