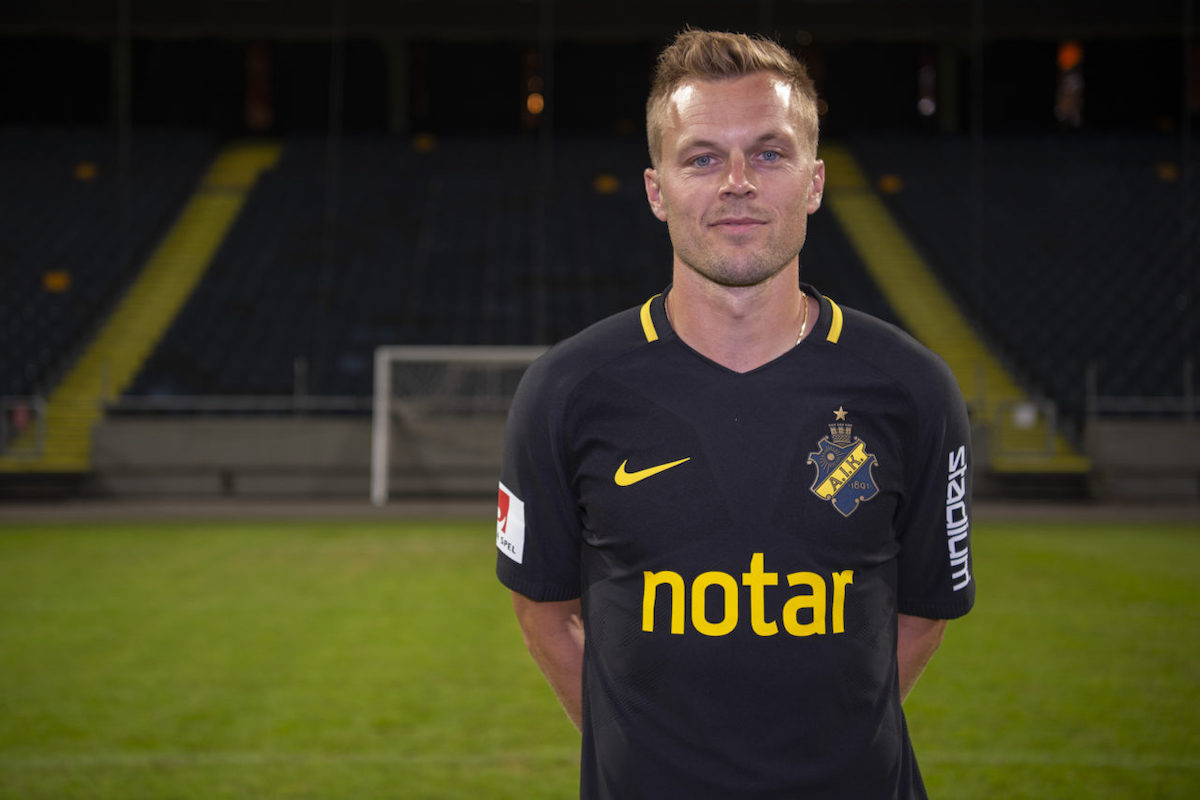 James Rowe interviewed former Arsenal and Birmingham City midfielder Sebastian Larsson exclusively for WFi. They discussed AIK’s title win, his time in England, and the biggest influences on his career.

You are currently playing for AIK in Sweden who are reigning Swedish Champions. To what do you attribute the success of last season’s title win?

Well, I think first of all, obviously going back a few years before my time, AIK was a club that had steadily been in the top three of the Swedish League. They have had a lot of second and third place finishes and the club has managed to stabilise itself as a top club in Sweden.

Prior to our title win last season, it had been nine years since AIK last won the Swedish title, and for a club the size of AIK in Sweden it is something that you should be doing — winning the league from time to time — and the club really made a push in that respect.

When I joined in the summer of 2018 I quickly realised that we had a great bunch of lads. There was a great togetherness and also a huge desire to make sure that we won the title.

Throughout the campaign we managed to focus on the right things. We did a lot of things off the pitch together as teammates and ultimately that helped us in the end.

You had a spell playing for Arsenal in England. How do you look back on your time there?

I have only got fond memories, and I have said this many times, I will forever be grateful.

I moved there when I had just turned 16 years old and I spent five years at the club before going out on loan.

I came through the under 16s, under 18s and the reserve team, as it was back then, and I also managed to get a few matches in the first team.

I went through the whole system at Arsenal, and for me personally I could not have had a better education, football wise.

The team they had at the time, with Arsène Wenger as manager and his way of dealing with the whole football club, was fantastic.

I left to go on loan and people have since asked me if I ever look back with any regret, and I honestly don’t. It was my time to move on and I felt at that age I needed to take what I had learned at Arsenal and use it elsewhere.

I will forever be grateful for the education I received at Arsenal.

You went on to spend four seasons at Birmingham City. How did you enjoy your time there and did you have any particular highlights? I can imagine the League Cup Final against Arsenal in 2011 springs to mind.

Yes obviously that is something that I will never forget. It was a special occasion for me personally, being against Arsenal and with us being massive underdogs.

Any other game under any other circumstances I would love Arsenal to win as I am an Arsenal fan, but on that day I was delighted that we were the team that won.

It was very special, and like it was meant to be. I had my family over for the final at Wembley Stadium against Arsenal, the club that gave me a chance in England,  and I managed to win the League Cup. It is not easy to win a trophy in England regardless of which one it is. It is very rare that a team from outside the top six wins and it is something I am proud of.

I had highs and lows during my time at Birmingham. The League Cup final and two promotions, but we were also relegated twice.

On a personal level I went there when the team was in the Championship under Steve Bruce. I was given great confidence by him and he showed great belief in me once the club wanted to make the move permanent.

That made my decision very easy because I got to play regularly. I felt that at the stage in my career that it was the right thing to do.

I would like to ask you now about your time representing Sweden. You earned over 100 caps and played alongside some great players. What are your memories and highlights of representing your country?

You are always going to remember your debut, and I made my debut in 2008 in an away match against Turkey which was one of those moments you dream of as a kid.

I had been part of the squad a few times before but I never got on the pitch. Making my debut for Sweden was an extremely proud moment.

I have also been to four major tournaments, which has been fantastic, but when you get knocked out of a major tournament at the group stages you leave with a massive disappointment and a bit of regret as well, so then to achieve what we did at the World Cup in Russia 2018 was fantastic.

Winning my 100th cap for Sweden was a very proud moment for me which happened before the World Cup. That was not a specific target I had in mind at all. Only when I got closer to it and realised it was possible.

There are only eleven players throughout football history in Sweden to have won over 100 caps, and when you see the names, it makes you proud.

During your career so far, given the clubs you have played for as well as playing for the Swedish national team, are there any particular players you have played alongside who stand out for you?

Yes, definitely, If you are talking about club level, I know I did not play many games alongside some of the Arsenal greats, but I was fortunate to play alongside players like Thierry Henry — probably the best striker to have played in the Premier League in my opinion — Patrick Vieira, Freddie Ljungberg and Robert Pires.

To have had the opportunity to play even one game with them was amazing.

On the international stage I have played alongside Henrik Larsson, Olof Mellberg, and obviously Zlatan Ibrahimovic for many matches, who is the best player in Sweden’s history and someone who demanded a lot.

It has been great. I do not think that I am the type of guy… when I do interviews and I get asked questions, it reminds me that I don’t think I reminisce too much whilst I am still in the middle of my career.

But obviously I would like to think that once my career is over I will look back at certain things, and certain moments will fill me with pride even more.

Other moments will just make you happy that you were allowed to be part of certain teams alongside certain players. Great memories.

I can imagine in your midfield position, especially as you mentioned going to four major tournaments and your experiences at club level, that you have come up against some really good opponents. Are there any that stand out for you?

For sure, the difficult thing is to separate them!

I managed close to 300 matches in the Premier League and you constantly come up against some of the best players in the world, but obviously I remember playing against the likes of Cristiano Ronaldo. He was fantastic.

I do remember one match — the one and only time I played against Lionel Messi when we had a friendly for Sweden against Argentina in Stockholm. Argentina had a front three of [Gonzalo] Higuaín , Messi and Angel Di Maria.

At the time and it was really tough to stay in that match and I personally realised at that time that Lionel Messi was on a different level to any other player. You could not get close to him even though you tried everything. He just moved the ball and himself the way he wanted to.

A big idol of mine since he broke through was Steven Gerrard at Liverpool, and I remember the first time I played at Anfield against him.

I remember a specific moment where I received the ball in and around the halfway line and I tried to turn and the next thing my feet are up in the air and I landed on my backside. It was Steven Gerrard that came flying in to a tackle.

It was a great tackle and I remember thinking, OK now I know what I am up against in proper football with top class players, and for me it is a memory that will always stick with me.

I had plenty of respect for Steven Gerrard before, but afterwards my respect for him went sky high, just in the way that he played football: so honest, so hard working, defensive, and attacking.

When you come up against a player that you have admired and he gives his all, it is hard to explain, but it was one of those specific moments where I kind of realised — I know I need to step up my game if I want to continue playing at this level.

Finally Sebastian, are there managers at club level, or maybe international level, that have played a key role in your development as a professional footballer?

Yes for sure, and once again I keep going back to my time at Arsenal and the education that I received.

People might think ‘well, you did not play many matches’ and I know that is true, but even when I was at Arsenal under 16s it was so clear to me that it was Arsene Wenger’s philosophy being implemented throughout the club, and that is the way you should learn football. That is how we were taught in the academy, it was his way.

Once you gradually progressed through the ranks it was all about his way of playing, and for him at that time to notice me and take his time with me… I had meetings in his office where he went through what he thought I had to work on and what he thought was best for my career, when it came to going on loan and so on.

I just respected him a lot for that. For him look at me as an 18-year-old who was barely part of his first team and for him to give me the time. When you sat down and spoke to him it was clear he knew everything. He knew about me as a player and as a character, and I just admired that a lot.

For a manager of his stature to go all the way down to an 18-year-old from Sweden and show me that he cares and try to help me throughout my career, that is why I will always be grateful to him.

Obviously then I progressed under Steve Bruce at Birmingham City, and he was the guy that gave me my real opportunity to play first team football on a regular basis. He showed tremendous belief in me as soon as I went on loan to Birmingham, and I had a fantastic season there.

Eventually, later on in my career, he was the one that brought me to Sunderland, so it is hard to look past him as well. He showed great faith in me to put me in the team, and showed belief in me.

He brought me to two different clubs in England. Without a doubt, off the top of my head, those two have always meant a lot to me.