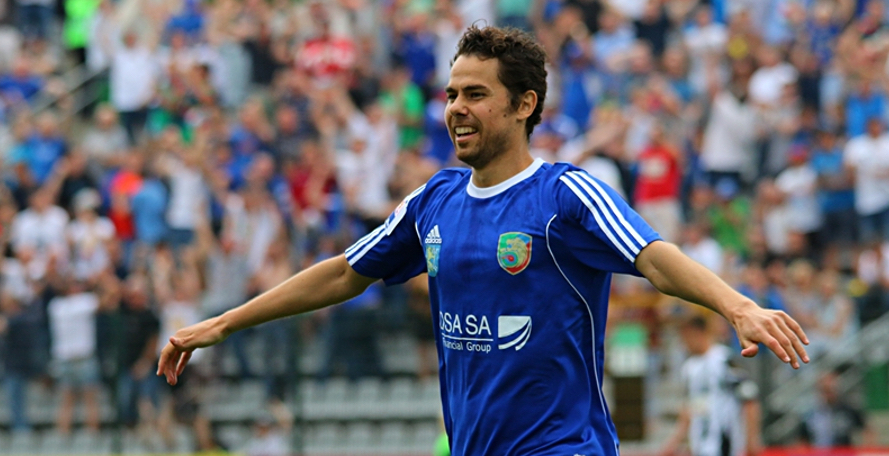 James Rowe spoke to Miedź Legnica’s Spanish midfielder Marcos García Barreno exclusively for WFi. They discussed the array of stars he played with and against during his time in Spain, and his recovery from a recent foot injury.

You have been with Polish side Miedz Legnica since 2017. How are you getting on there, and what kind of club is it?

The current year was started in a beautiful way because it was the first time Miedz Legnica were playing in the Polish first division.

Miedz supporters, players and backroom staff were full of excitement. In my case I started playing well and in October I suffered an injury, and since then I have been out injured.

Are you still injured? Is your injury very serious?

At the beginning it was not a serious injury. One of my metatarsal was broken and it was only going to take me two months to recover, but unfortunately the bone was not recovering correctly and I needed a second surgery.

After five months I am seeing progress in terms of my recovery, and I will come back to play very soon.

You spent three seasons at Villarreal. How do you look back on your time there?

It was a wonderful experience. I arrived at Villarreal when I was 13 and played in the youth team.

I learned a lot and It helped to shape me as football player. Then I started playing for the first team, playing with Villarreal in first division.

I could enjoy the football and learn from excellent players at that time. Experiences like that, you never forget.

You also played for Real Sociedad. How was your experience there and What were your highlights from your season in San Sebastian?

Real Sociedad is a peculiar club. They are very familiar and football is lived with high intensity. In San Sebastian people will cheer you walking in the street.

There is an excellent atmosphere on the match days. San Sebastian is also a beautiful city. I was 22 and it was in a time in my life for enjoying.

I learned a lot and I keep wonderful memories. Real Sociedad, together with Villarreal, have been the most beautiful experiences I have had in football.

Marcos, could you mention the best players you had the opportunity to play with during your career?

Yes of course. I had the opportunity to share changing room with [Juan Román] Riquelme, [Diego] Forlán, [Robert] Pirés, Santi Cazorla, and Alessio Tacchinardi, to name a few.

I had excellent managers as well. Manuel Pellegrini during my time with Villarreal, Juanma Lillo at Real
Sociedad — now he is managing Kobe in Japan with Andres Iniesta and David Villa. You can learn a lot from such people.

You named players with excellent quality. Did you receive advice from them in the past, for example from Riquelme, Pirés or Forlán?

Yes, they always teach you how to face the football in a different way. They teach you to be calm.

When you go out to play you are a little bit nervous, you do not know what are you going to come up against, and more experienced players give you that calmness.

They tell you: be calm, play as you know. It is the main support you receive.

In your role as central midfielder you must have faced difficult opponents. Could you name some?

I could enjoy playing with great opponents like Dani Alves, [Lionel] Messi, Ronaldiño, [Samuel] Etó, Deco, Sergio Ramos, [Iker] Casillas… but not only from Real Madrid and FC Barcelona, from many other teams, too.

But I must recognise that from all of them the one I always remember is Dani Alves, because I was playing as a left winger and him as a right back. We were always playing one against the other.

Which managers have been influential and played a key role in your development as professional footballer?

I have had lots of managers like Juanma Lillo [at Real Sociedad]. He taught me a lot technically, mentally, and tactically, but from all of them without any doubt ,Manuel Pellegrini.

He gave me the opportunity to reach the first division. He supported me in playing for the first team in Villarreal.

Thanks to him, nowadays I have been able to enjoy many years of good football, and I could learn from my experiences.