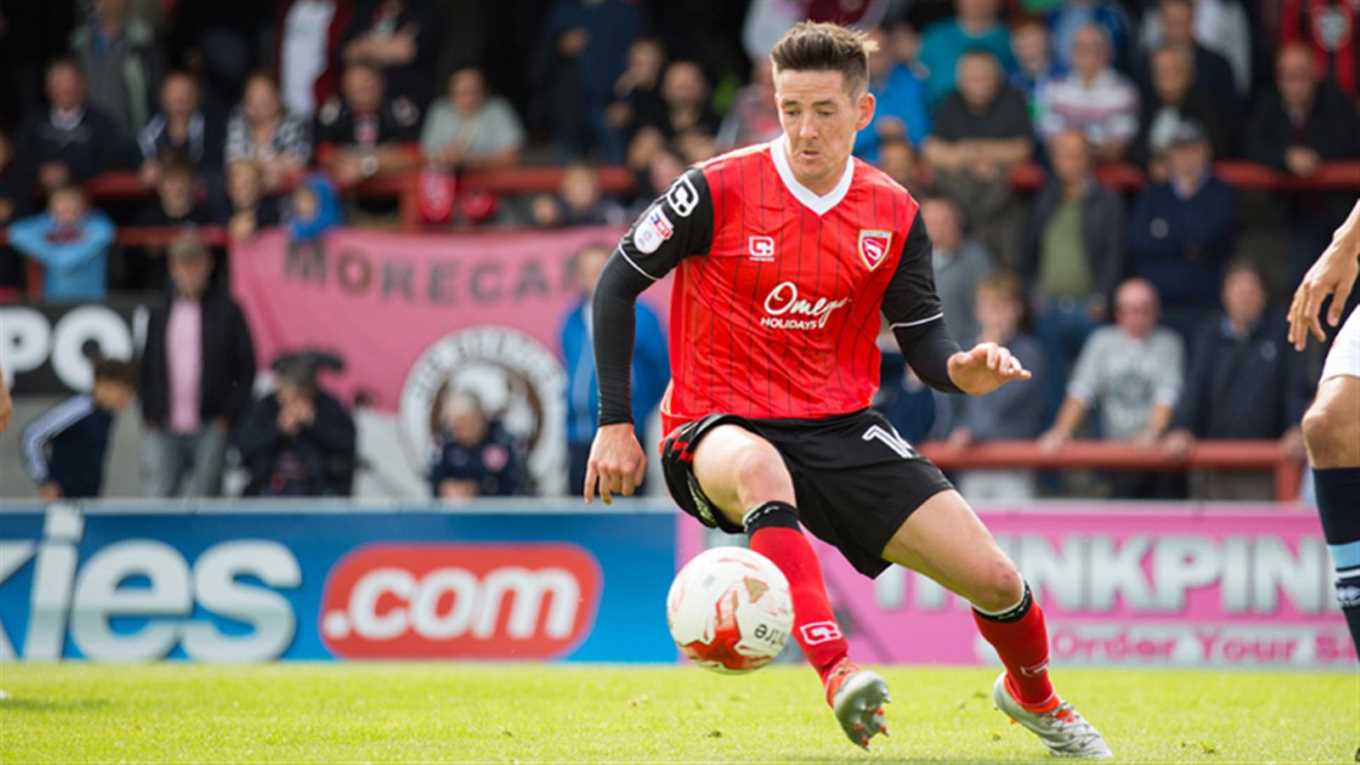 You signed for Morecambe FC in 2016. How are you finding your time at the club so far?

Yes, I signed in 2016 off the back of a six month loan deal and I settled in quite well. I became friendly with a lot of the lads and I agreed to sign before my loan deal ended.

I signed a two year deal and I believe that it was the right time for me to break away from Burnley and Morecambe is certainly the right place for me to grow as a player and develop my career.

You mention Burnley there, for whom you played as a youth. How do you look back on your time at the club? Do you feel that you received a football education that has stood you in good stead in your career?

Yes, I think so. I first signed for Burnley when Eddie Howe was manager and managed to progress quite quickly.

I was on a scholarship along with five over players and we played in the youth and reserves teams. I did well, especially in the youth cup, and I ended up signing pro after my first year as a scholar.

I was only 16 when I moved to England and it was a big ask leaving my family behind. I knew Shay McCartan (current Lincoln City player) and we were both together at Burnley.

Knowing someone from home helped me to settle in, and moving away from home at a young age makes you grow up quick.

Sean Dyche came in after Eddie Howe left for Bournemouth, and the mentality of the club was very good. We were well drilled and worked hard and we managed to reach the semi final of the FA Youth Cup.

You had a loan spell at St Mirren in Scotland. How do you look back on that and what was it like playing your football in Scotland?

At the age of 21 I knew I had to get out and start playing first team football, and the opportunity came to go to Scotland.

I started well, debuting away against Rangers at Ibrox in the first game of the season was a great experience.

In the local derby against Greenock Morton I ended up getting sent off. That was live on TV actually, and I could not really get back in after that.

It was a good experience to play in Scotland. For me personally it did not work out as well as I wanted it to.

My next question refers to representing Northern Ireland at youth level. Do you have any highlights or memorable matches that you played for your country at that level?

We always had a good group of lads and we always enjoyed our time away together.

One match in particular that I remember was when we played France in the Euro Under 21 Championship qualifiers. They had big name players like Adrien Rabiot , Presnel Kimpembe, and Corentin Tolisso. They are all playing Champions League Football now so it was quite an experience to play against them.

It will be nice to tell the grandkids one day that I played against such players.

You have mentioned your experience of playing at youth level for club and country. Are there any teammates that you have played alongside who have stood out?

At my age group there has not really been anyone that has broke through. Paddy McNair — ex-Manchester United, currently at Sunderland — was like the superstar of my age group!

You mentioned the quality of the players when you came up against France. Were they the opponents that have stood out for you, or have there been others?

In that France match I marked Moussa Dembélé who was at Celtic but is now playing for Olympique Lyonnais.

I played in the left side of a back three, but with his movement you could tell that he was playing at a high level. You take your eye off him for a second and he could be in behind you.

Corentin Tolisso and Adrien Rabiot, were both very calm on the ball. The pace in which they move the ball too — they both showed a lot of composure for their age.

Finally, Luke, are there any managers you have had at club level or international level who have played a key role in your development as a professional footballer?

I would say my youth team manager at Burnley, Terry Pashley, and his coach Andy Farrell. They helped me because they were very old school and I think you need that as a young player in order to have a long career in the game.

You have to learn the trade. They kept me working in a professional way and obviously helped you to improve individually and also as a team.

Terry Pashley was a good manager who guided players in the right way and did not let any players get ahead of themselves. He kept their feet on the ground.