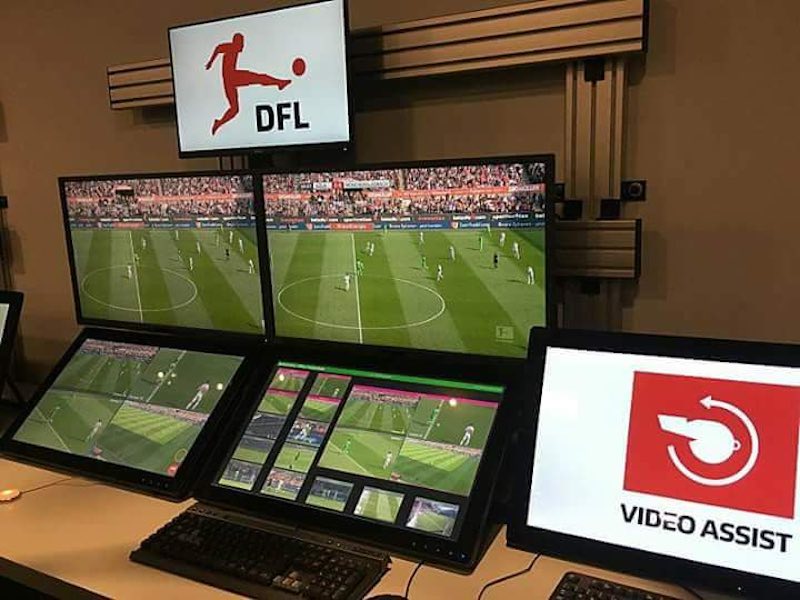 This past week in Germany saw plenty of drama and it began midweek in the DFB Pokal.

The following night was where the big talking points emerged as Werder Bremen took on Bayern München.

Bremen fought back from two gaols down to draw the game level with Bayern and leave the champions reeling.

But just as it seemed a shock might be on the cards at the Weser-Stadion, Bayern were handed a very contentious penalty for an alleged shove on Kingsley Coman.

Despite the protests of the Bremen players, referee Daniel Siebert refused to consult VAR and Robert Lewandowski converted from the spot.

This prompted furious scenes at the final whistle that overshadowed Bayern progressing to yet another final and also brought about a statement from the DFB.

In it, they criticised the failure of VAR intervention and declared the penalty decision as an incorrect one.

An early Mario Götze goal, from a delicious Jadon Sancho chip, seemed to suggest the title chasing hosts were going to comfortably overcome their struggling rivals.

Within a few minutes, though, the game turned on what seemed nothing more than a hopeful handball shout.

Breel Ombolo hit a shot that struck the arm of Julian Weigl from less than a metre away. Referee Felix Zwayer watched a VAR replay of the incident before surprisingly awarding the penalty.

Despite a recent trend of the handball law becoming more harshly applied, most notably in the Champions League, this was still a very controversial call.

Weigl stretched out his right leg to block the shot and naturally, his left arm came out for balance. With the two players on top of each other and the speed of the ball, it was impossible for Weigl to move his arm from what was a natural position.

Dortmund coach Lucien Favre called the decision a “scandal”, but referee Zwayer said in an interview that it was a “very, very clear penalty”. An astonishing claim from an official who was very, very poor throughout.

Dortmund boss Lucien Favre comments on the way the handball laws are applied. Julian Weigl was penalised (VAR) after the ball hit his arm from close range.

"Football is making itself a laughing stock. What do they want players to do, cut their arms off?" https://t.co/LrAQAzrWBY

Daniel Caligiuri tucked away the penalty with aplomb and Dortmund, who were understandably aggrieved, allowed themselves to wallow too much in self-pity and Schalke, to their credit, took advantage.  Salif Sane rose highest to head home from a corner and give the visitors an unlikely lead that they took into the interval.

A frustrated Dortmund initially responded well, but Favre opting for Thomas Delaney and Axel Witsel in holding midfield was looking a questionable decision as they lacked the incision needed to prise open a determined Schalke backline.

The introduction of Paco Alcacer for Delaney appeared to be the logical response, but it had no chance to take effect because they were down to ten men within a few minutes.

Marco Reus was the man receiving his marching orders for a foul that looked worthy of nothing more than a yellow card. Referee Zwayer again left the Westfalen in shock as he produced a straight red.

Dortmund’s hopes in the game went down the tunnel with their captain. From the resulting free-kick, Caligiuri found the top corner with a truly wonderful strike.

Dortmund being one man and two goals down wasn’t the end of things though, as Marius Wolf was rightly dismissed a few minutes later for a cynical foul from behind.

A similarly nasty foul from Schalke’s Weston McKennie only resulted in a yellow card from Herr Zwayer, as proceedings threatened to get out of hand.

A charged-up Dortmund still managed to apply pressure and a late goal from Witsel prompted the question: could they really make the most unlikely of comebacks? That was answered just a few minutes later, when Embolo finished expertly from the angle to seal the game.

We still had enough time for tempers to flare further, but it was a deserved and famous win for Huub Stevens and Schalke to effectively seal their Bundesliga safety.

#Schalke manager Huub Stevens casually sipping his Pils in the corner of the pub during the post-derby celebrations in Gelsenkirchen last night 🍺 pic.twitter.com/4Mkamqpt9N

The following day saw another derby, this time a Bavarian affair between Bayern and Nürnberg. A win for the reigning champions would all but confirm another title and it was very much expected against a Nürnberg side set for relegation.

As the cliché goes, derbies can be different and this one lived up to that cliché. Nürnberg unexpectedly took the lead via a nice strike from Matheus Perieira and Bayern were struggling to find a break through until Serge Gnabry equalised with a delicate finish.

The drama wasn’t done there though; a last minute penalty for Nürnberg seemed to be about to throw Dortmund and Nürnberg a life-line in their respective title and relegation battles. However, being the dramatic weekend that it was, we got another twist as Tim Leibold hit the post.

Bayern gets lucky as Nurnberg hits the post on the late penalty. #FCNFCB pic.twitter.com/MliwnIVjYP

There was still time for more drama, as Coman broke free in the closing seconds of injury time, but he effort was saved and the game ended 1-1.

It means that the title race is still alive with three games to go. Bayern remain in pole position and have the apparent simple task of Hannover this weekend as Dortmund take on Düsseldorf, but it seems we cannot take anything for granted.

That relegation battle has yet to be concluded with that point for Nürnberg and Hannover getting a 1-0 victory over Mainz, but Stuttgart edging out Borussia Mönchengladbach 1-0 means that they’ve kept their distance from the bottom two and are likely to end up in the play off position.

That surprise win for Schalke keeps the Royal Blues six points clear of Stuttgart, with a vastly superior goal difference to boot.

The race for the European football spots is as hotly contested as ever. RB Leipzig have confirmed they’ll be playing Champions League football next season and can mathematically still catch the top two, but behind them, the battle for fourth is realistically between four teams.

Eintracht Frankfurt currently occupy that position with a three point cushion, but Mönchengladbach, Bayer Leverkusen and Hoffenheim are all still in contention.

So, with three match-days remaining there is still so much to play for in this intriguing Bundesliga campaign.

Jerry Mancini: Gattuso: Napoli Need To Be Nastier If They Are To Turn Their Season Around