Jesse Edge: The New Zealander Living The Dream In Europe 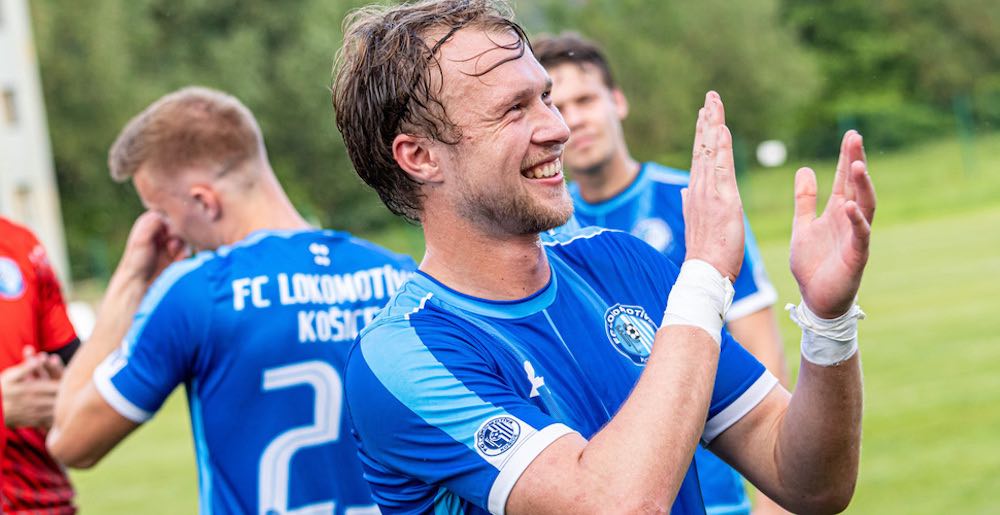 James Rowe spoke to Lokomotiva Kosice defensive midfielder Jesse Edge, exclusively for WFi. They discussed his time playing for the New Zealand youth teams, and coming up against the likes of Frenkie de Jong and Matthijs de Ligt in the Netherlands.

You signed for Lokomotiva Kosice in 2019. How are you finding your time there so far and how would you describe the club?

I had a little bit of a tough time being without a club. I played in Slovakia before for Podbrezova. I signed a six month contract with them.

Personally I thought I did well there and I got my name out there a bit by playing well, and an opportunity came quite late in the window through my Slovakian manager here at Lokomotiva Kosice.

So far everything has been going reasonably positive. I have played seven matches so far. I am really enjoying my time here Kosice is a beautiful city and we have had five wins , one draw and one loss so far. We have a young manager and a good group of you players that are managing to push the team forward ‘

You had a spell in Italy at Vicenza. Could you tell me about your time there and how do you look back on your experience in Italy?

Vicenza was my first European experience, and first experience at a football club outside of New Zealand.

I had been involved with the international setup with New Zealand and a scout got in contact with me there and said that there was an opportunity to come on trial at the club.

I went on a trial and I impressed on the first couple of days and got a contract. I ended up spending an amazing two years there.

My second year, especially, I was 100 percent involved with the first team. Unfortunately I did not make my debut for the club but we ended up finishing third in Serie B.

We had some amazing players, such as Leonardo Spinazzola who is now playing at Juventus, and Andrea Petagna playing every week at SPAL 2013.

We had a very good setup up with good coaches and I learned so much during my time there.

You had a spell in the Netherlands playing for Achilles ’29, making many appearances. How do you look back on your time there?

My time is the Netherlands was really positive. Actually I am still based in the Netherlands. My girlfriend is Dutch and every time I have a break I am always based in Nijmegen.

I really enjoyed my time in the Netherlands, both on and off the pitch.

It is known as a technical footballing country and I was lucky enough to be coached by Arno Arts, who was a famous player.

He taught me a lot in terms of technique, and I felt that I improved personally as a player. The Netherlands and Achilles’ 29 was a great place to improve my game, that is for sure.

You have represented New Zealand at youth level. How was it for you to represent your country? Do you have any highlights or special matches which stick in your memory?

I have been really lucky to be involved in the international setup, and I have been on two tours with the first team in China and Thailand.

The matches I represented New Zealand were at youth level, and one that sticks out for me was my first one at under 17 level in the World Cup in Mexico.

Another one was the U-20 World Cup in New Zealand. It was amazing to have the whole country behind you, and that is a lot of what football is about — having emotion and a spirit behind you.

So those are two of the biggest experiences for me with the New Zealand international setup.

I would say that the players I played with in Italy stick out. One player — Srđan Spiridonović —
is now playing in Greece as an attacking player. He was unbelievable with everything that he could do with a ball.

It was a real learning curve for me in Italy to play against players now playing in Serie A. The Netherlands as well was a different style technically.

With that in mind, as a defender could you say who are the best opponents that you have come up against in your career so far?

I played against Frenkie de Jong and Matthijs De Ligt who are now both worth about €100 million.

I felt quite comfortable in the match that I played against them when they were playing for Jong Ajax.

Obviously it is their consistent quality, and well done to them both for taking the opportunity. You only have to look at what they have achieved in the Champions League this season, and that was great to see.

A friend of mine, Ryan Thomas at PSV Eindhoven, also took his opportunity. I have played against some amazing players during my time in Europe.

We played a friendly match against the first team of Juventus with Vicenza, and a friendly against FC Schalke 04 in Germany. There have been so many moments where I try to learn, take in information and learn from it.

Those are the players that have stood out for me and they are on their own path. I am on my path trying to reach the top level around Europe.

I am still living the dream of being from New Zealand and playing professional football in Europe.

Finally, Jesse, you mentioned Arno Arts at Achilles’ 29, but could you say who are the other managers and coaches that have played a key role in your development as a professional footballer?

The biggest one that sticks out for me is my uncle, Declan Edge. He runs a big footballing academy in New Zealand.

He just won the New Zealand league with a team connected to the Eastern Suburbs. He set up a full-time environment [for youth football] in New Zealand, since I was around 13, which is unheard of.

We have about nine professional players from one city in the country, which is fantastic.

Apart from that, at first team level I have been blessed to have amazing coaches. Giovanni Lopez, a former Lazio player, was the manager when I was at Vicenza, and he brought me into the first team.

Pasquale Marino [current Spezia manager] took over from him. He was a famous manager due to his time at Udinese, and he is a great manager.

I learned so much from all four of these coaches, in many different ways, different styles, what football is like in different countries, and also in a positional sense.