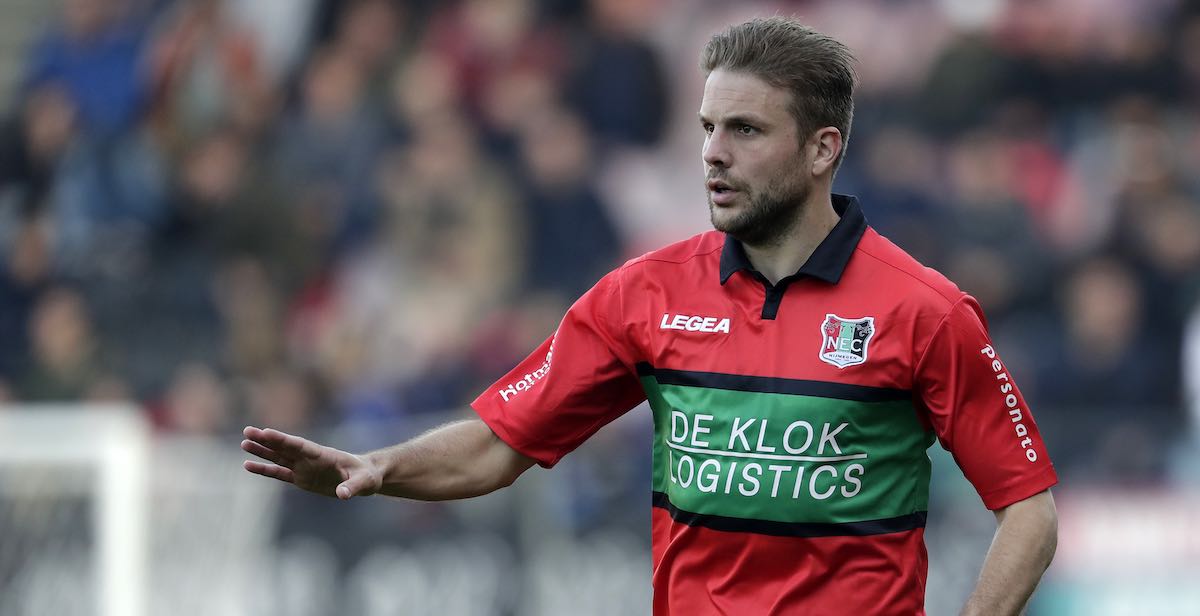 Are you enjoying being back in the Netherlands with NEC Nijmegen? What are the goals and strengths of this NEC Nijmegen team?

We wanted to become champions but that is no longer possible. Goals and objectives always move during a season, and we aimed for the play-offs which we achieved. Promotion to the Eredivisie was our goal at the start of the season.

The squad is really good at bouncing back from disappointments. If we play a bad match we know how to take the positives out of it. We are resilient.

You had spells at SC Heerenveen with your second stint lasting three seasons. How do you look back on your time there?

Yes that is correct. When I was younger I also played for SC Heerenveen and it was nice to return to the club.

In the beginning it was really nice and I managed to play with many good players. We competed to qualify for Europe and I felt that after three seasons that it was time to look for a new challenge because I felt that the club was not progressing.

My highlights during my time at the club were playing in some great matches with great players, it is just a shame that we did not manage to qualify for Europe.

We managed to qualify for the Eredivisie European play-offs and we battled for something and during the regular season we managed to make life difficult for the likes of Ajax, Feyenoord, and PSV Eindhoven — often beating them as well.

We definitely had quality during my time at SC Heerenveen.

You went on to play for Reading FC in England. How was your experience playing in a new country in a difficult league, and how do you look back on your time there?

Playing for Reading was a different world in comparison to the Eredivisie and the Netherlands.

It was a fantastic experience and my first season was amazing. We managed to achieve a play-off spot for promotion to the Premier League. We played at Wembley which was a massive highlight.

We also played away to Manchester United and Arsenal in the domestic cups. I also saw how people live for the sport of football in England, and it is completely different to the Netherlands.

The Championship is a physically demanding league of 46 matches, and also the cup competitions too. At the beginning of my time at the club I had difficulty with the tempo of the league and I was lucky that I had a Dutch manager in Jaap Stam who wanted to play good football.

We had a lot of possession in matches. I understood Reading were one of the clubs with the lowest budgets in the Championship, but everything was arranged in tip-top fashion, from the pitches on the training ground to the canteen. A very impressive setup.

They played Premier League football as recently as 2013, and in recent seasons have been fighting against relegation so you see how things can change for clubs in England in such a competitive league.

You mentioned playing with good players at SC Heerenveen. Could you say who the best players are that you have played with in your career so far?

I always though that Filip Duricic (currently at Sassuolo in Italy) was a very good player, and Sven Kums (currently playing for Anderlecht) was also a good player.

Alfred Finnbogason scored so many goals when he played for SC Heerenveen. Maarten De Roon who is now in the Dutch national team setup.

Hakim Ziyech who recently played in a Champions League semi-final against Tottenham Hotspur. They are all players with great quality and it was a pleasure to play with them.

There also also players such as Wiljan Pluim at PEC Zwolle who is not so well known. As a footballer you know how good a player is when you train with them day in and day out, and there are many good footballers who are underexposed.

Sometimes you play together with so many players that you forget with who you have played with!

In your position as midfielder I can imagine that you have come up against many good opponents. Are there any that stand out for you?

Christian Eriksen at Ajax was always a difficult opponent. Dusan Tadic when he was playing for FC Twente and Karim El Ahmadi when he was at Feyenoord.

These are the players that stand out to me when thinking about the difficult opponents I have faced.

Finally, Joey, could you say who are the managers that have played a key role in your development as a professional footballer?

You learn something from every manager you play under, but the managers that stand out for me are Art Langeler at PEC Zwolle and Jaap Stam at Reading.

And Marco van Basten at Heerenveen due the fact that he brought me back to the club.

Jaap Stam as a manager is extremely detailed. He lives and breathes football which you may not associate with a player who was a defender.

He is very strong in a tactical sense from the defence to attack in terms of thoughtful planning and extensive preparation.