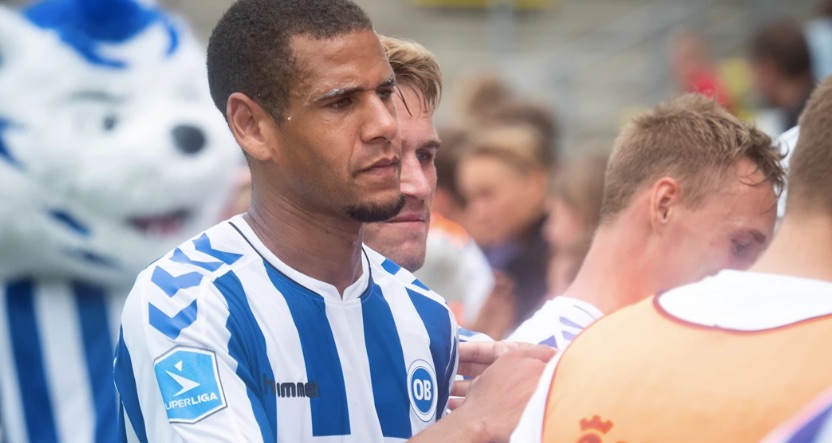 James Rowe spoke to Dutch centre-back Ramon Leeuwin exclusively for WFi. They discussed the differences between the Danish and Dutch leagues, as well as coming up against the likes of Luis Suárez and Robin van Persie.

You signed for Odense in 2018. How are you enjoying your time there so far and how would you describe the club?

I am really enjoying my time at the club so far. We have a great team which is the most important thing. There are also great people working at the club and we do everything together.

Odense is a slightly smaller club than FC Copenhagen or Brondby, but we are currently third in the league. We often finish in the higher echelons on the Danish Super League and we are comparable to AZ Alkmaar or FC Utrecht in the Netherlands in that respect.

In terms of the club itself, everybody here at Odense helps one another and there is a friendly atmosphere.

Do you notice a clear difference between the Eredivisie and Danish Super League?

In the Netherlands almost every club plays with wingers and is intent on playing attacking football. Dutch teams want to have the ball and dictate play.

I would say that in Denmark teams play from a starting point of being extremely well organised, for example almost every club here in Denmark plays with two strikers.

In that respect you do see a difference between the two countries.

You played three seasons for ADO Den Haag in the Netherlands. How do you look back on your time at the club?

I have mixed feelings when I look back on my time at ADO Den Haag. John van den Brom brought me to the club and we played some great football, beating Ajax twice and winning away at PSV Eindhoven. In my first season at the club we had a great season.

In my second season I suffered a bad knee injury and that was difficult as it signalled the end of my adventure at ADO Den Haag. I did not manage to get back to my level, and therefore did not get the chance to fight my way back into the first team.

Following on from ADO Den Haag you signed for SC Cambuur Leeuwarden for one season. How do you look back on your time there?

At the time my move to SC Cambuur was the best choice that I could make. They had been promoted to the Eredivisie the summer before.

We had a fantastic season. We had two very good managers in Dwight Lodeweges and Henk de Jong.

We also had a very good team with the likes of Elvis Manu and Martijn Barto. We managed to finish mid-table and for a club such as Cambuur was that a fantastic achievement and it is also a great club.

I have great memories of my time there. I managed to put in some great performances and improve as a player thanks to my time at the club.

100 – Ramon Leeuwin completed 100% of his 31 passes vs FC Groningen and won all three of his aerial duels. Perfect. pic.twitter.com/iiICp0jARg

You have experience playing in the Netherlands and now in Denmark. Could you say who are the best players that you have played alongside so far in your career?

I managed to play with many good players during my time at FC Utrecht, such as Sebastian Haller who now plays for Eintracht Frankfurt and is scoring many goals in the Bundesliga.

I must also mention that during my time at AGOVV Apeldoorn I played with Dries Mertens and Nacer Chadli, which was fantastic.

I can imagine that as a defender that you have come up against many good opponents. Are there any that stand out for you?

As a defender you come up against so many good opponents. I would say the most difficult opponent from recent years was Luis Suárez when he played for Ajax.

But the best opponent I ever faced particularly in the last two seasons was Robin van Persie. He is such an intelligent player who knows how to find space and his technique is impeccable.

I played against him since his return to Feyenoord, but you could see even during his time at Arsenal and Manchester United that he was even better during that point in his career.

Finally, Ramon, you already mentioned John van den Brom, but could you say who are the managers and coaches that have played a key role in your development as a professional footballer?

I have been very fortunate to play under very good managers. At FC Utrecht Willem van Hanagem was my manager. I was a striker at the time and he put me in defence and that has been very important for my career.

Willem van Hanagem is an old school manager. He has a lot of football knowledge and he does not forget a thing. He also loves football too.

Also John van den Brom at ADO Den Haag gave me a lot of confidence and he is also a manager that can make players better.

You see at the moment Ajax manager Erik Ten Hag is getting a lot of compliments and rightly so. He was my manager at FC Utrecht and we all knew how good he was. He lives and breathes football 24/7 , 365 days a year, and I can say without doubt he is the best manager I have played under. In the two and a half years he made me a better player.