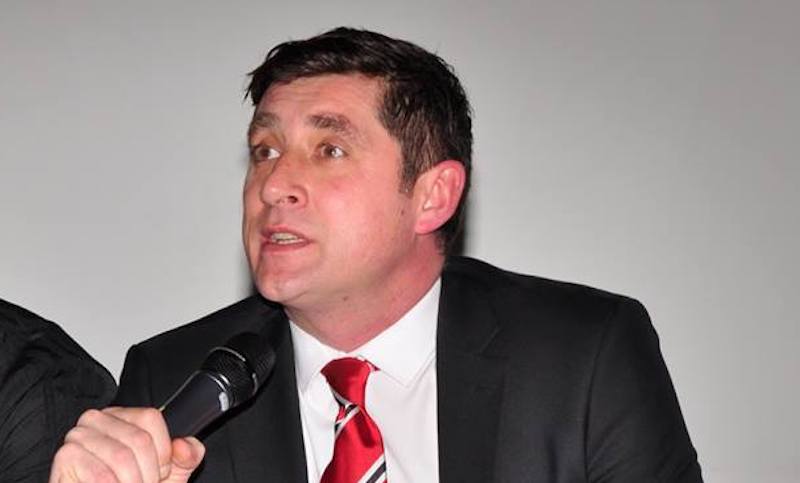 James Rowe spoke to Derry City manager Declan Devine, exclusively for WFi. They discussed his playing career which was cut short by injury, and the influential manager who encouraged him to complete coaching courses while still a teenager.

The last time I was in charge we were quite successful winning the Irish Cup and moving players onto England, and qualified for the Europa League twice, so when the opportunity came to become Derry City manager it was a no brainer.

As a lifelong Derry City fan, having played for the club and come through their ranks, and having done every job including youth development right through to youth coach and assistant manager, it was such an easy decision to take charge again of a club that I have very close to my heart.

I felt that I can still give something to Derry City, and having watched them underperform and take a few beatings last season, I want to be able to leave the club in a better place. That is ultimately the job that I want to do.

I want to put a structure in place so that this club can get back to the upper echelons of Irish football where they belong, and thankfully it is so far so good.

My ultimate objective is to try and win trophies and qualify for European competition, but more importantly, leave the football club in better and healthier place that what I inherited.

I would like to ask you about your playing career. You spent time at Ipswich Town during your youth career and played for different teams in Ireland. How do you look back on your time as a player?

I had a quite good youth career. I had options of signing for four of five top clubs in England — Ipswich Town, Manchester United, Leeds United, and Aston Villa.

I decided to go to Ipswich Town because I felt my natural progression would have been quicker at that age, but unfortunately for me when I moved to England, within six weeks I had suffered a cruciate knee ligament injury.

As a goalkeeper and it knocked me for six, and we did not have the medical and sports science in 1990 we have now.

I was out for nine months, then I came back and did my cruciate for a second time after returning from injury five weeks earlier. It was unheard and resulted in another long spell on the sidelines for me.

To be honest after that I was never the same, so my playing career was always going to be difficult.

I had a manager at the Ipswich Town first team John Lyall who was an excellent man manager, and he was the one that actually encouraged me at an unusual age to start doing my UEFA B License. I did that at the age on 19, and he was a huge factor in encouraging me to take a coaching qualification.

I had an idea when I had done my cruciate for a second time that my playing career as going to be relatively short, and with the advice of John Lyall, a fantastic and brilliant man, he really helped me and I got on the coaching ladder at only 19 years of age.

When I came back home I signed for a club called Omagh Town and I had a really good year there, winning player of the year in Northern Ireland.

From there I transferred to Glentoran FC in East Belfast who are a very big and successful club. I enjoyed playing for them but my knee remained problem, especially when recovering and playing matches. It affected my state of mind too, being able to see the writing on the wall regarding my career.

So when the opportunity arose to go to Derry City to become a youth development coach, that really helped me personally, as I retired from playing professional football at only 26 years of age, so going on to coach has really worked out for me.

“If we win seven games, we’ll be in Europe. It’s as simple as that.” Declan Devine urges @derrycityfc
to up the ante with less than 60 days of the season remaining. #derrycityfc #waterford https://t.co/ch137eF9ym pic.twitter.com/Nx3A026z0K

You mentioned the teams that you could have signed for. Was it difficult for you as young man to make that decision, and what was the decisive factor in choosing to sign for Ipswich?

It as very much about trying to progress and become a professional footballer.

I had a lot of confidence in my ability, and even though Ipswich Town were one league below the other teams, I felt to sign for them would offer natural progression, and it would be the quickest rout into the first team at a young age.

As a Manchester United fan it was incredibly difficult to tell them I had chosen to go to Ipswich, because I had been to the club many times and even the great Alex Ferguson had been in touch with my family and encouraged me to sign for the club.

It is something I have never really spoke about. I spent time with Alex Ferguson but I also had a look at Manchester United. At that time and there was probably about 12 goalkeepers at the football club, and when I looked at Ipswich Town they had three youth team goalkeepers, a reserve goalkeeper, and a senior goalkeeper so I only had for goalkeepers ahead of me at that time.

Also, the John Lyall connection, and working with goalkeeping coach Phil Parks was something that I felt would really help me. I looked up to Phil Parks when he was playing, and that he could have a hand in my development as a goalkeeper — it was a relatively easy decision.

Ipswich Town at that time had such a wonderful reputation as a youth development club, and having players come through their system.

As much as the bright lights of Leeds or Manchester, and Aston Villa also being an option, I felt that Ipswich was the right fit for me.

Looking back you could say it was not, due to sustaining the injuries and everything happens for a reason, but had it not been for my injury and playing career, my coaching career would not have been what it is.

You had a three year spell managing the Northern Ireland under 16 team. How do you look back on your contribution to the Nothern Ireland youth team, and do you have any special memories of the things you were able to put in place at international level?

Well, It was a very good time for me because, having left the senior side of management, I felt I needed to go and rediscover myself, go back to the drawing board, and try to improve as a manager of then 41 years of age.

So when the opportunity came up to work for the Northern Ireland football association, it was down to working with Jim Magilton. Someone who I could learn from and someone who had managed Queens Park Rangers, and also my ex club Ipswich Town.

With him having been a Premier League footballer, I felt that he was someone that could really help me to improve my coaching.

I remember we had matches against France and the Ukraine. France had players such as Adrien Rabiot, Corentin Tolisso, and Lucas Hernandez playing.

That side of coaching gave me an insight into the top, top level of international football, which I had never experienced as although I played at under 21 level, I never got on the ladder properly.

I worked with some great players at youth level with Northern Ireland, and also current national team manager Michael O’Neil in terms of having meetings and watching matches together, so it was a really good learning curve for me.

I am extremely grateful to Jim and the Northern Ireland association for giving me that opportunity.

Finally, Declan, you are still a young manager and you have built up experience at club and youth international level. What would you like to achieve in your managerial career?

I would like to be as successful as possible and always strive to get better. At 34 years of age I moved to assist the then Dunfermline Athletic coach, Stephen Kenny, and to be able at the age of 34 to compete against the likes of Celtic at Parkhead and Rangers at Ibrox, everybody can relate to the big matches.

I would like to get to the highest possible level I can get to, and I am very ambitious. I want to want to win trophies and manage in European competition.

I want to have a prolonged managerial career which is not just a quick fix at Derry City football club. I treat everyday with respect and I try to better myself and my players, and get them to a level where they are respectful of their journey’s and their careers.

We are all here to try our best, but ultimately football is a very cutthroat business where you can never plan too far ahead because you just to not know what is around the corner.

First and foremost I want to enjoy every moment. I have be blessed to only have been involved in football my whole career, and is something I strive to get better at.

I want to be successful, and in the opportunities that may come my way, I believe I will be able to do quite well.