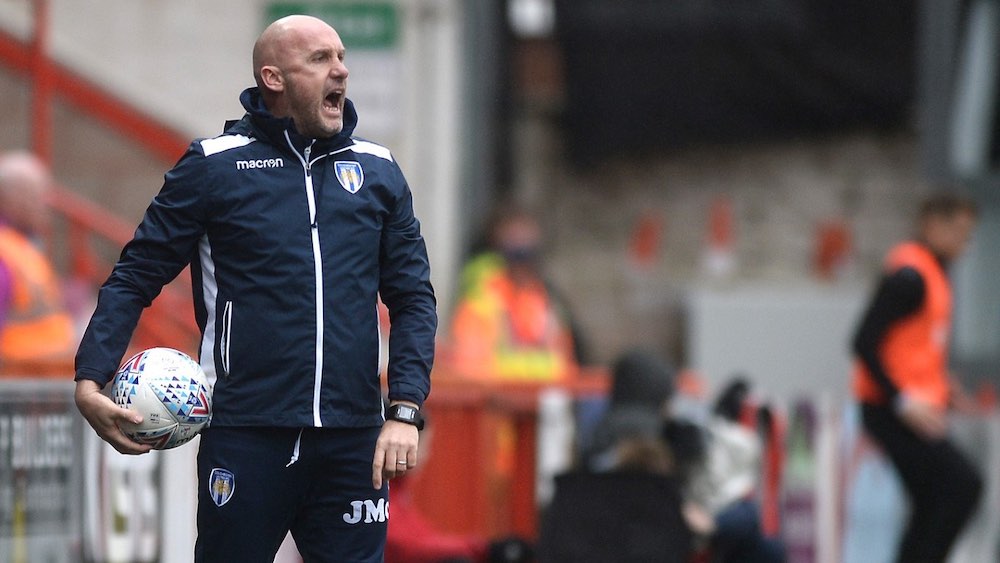 James Rowe spoke to Colchester United manager John McGreal exclusively for WFi. They discussed his move into management and his aims for the season in League Two.

You became manager of Colchester United in 2016. How are you enjoying football management so far?

I am going into to my fourth season of football management and also having done the background of different age groups from under-13s all the way through.

Colchester United is a club of opportunity, not only for players, but also for coaching staff, and I am proof of that.

I had a good football career but did not think that I would come into the managerial world.

I always thought that I would remain a coach, but when opportunity knocks you can either pass it on to someone else or have a go yourself. The more I have got involved in it, I have picked the brains of the former managers I played under.

The day to day business of dealing with the director of football, agents and the chairman — I have loved it.

We have great support here, and we feel that we are making a name for Colchester United throughout football, especially in League 1 and League 2, and the type of branding we try to do.

What are the objectives of Colchester United for the 2019/2020 season?

We missed out on the League Two play-offs last season by one point. We were in the play-offs apart from the last two minutes of the season, which was very disappointing given all the hard work we had put in together as a club — players and fans.

We want to improve on last season, where we finished strongly, especially the last four or five matches where we picked up good wins. We want to continue with that form and make that step into the play-offs.

That is our target as football club, and we know that it will be difficult as all clubs have constraints at our level.

We also want to bring through the next generation of our academy boys, and that is a huge part of our DNA as a club.

We played six academy players last season and the next batch of players are now coming through.

For example, Ollie Kensdale and Ryan Clampin were on the bench last season, and we started introducing them to training.

We are looking for them to get good game time and have a good pre-season where they will kick on and make a name for themselves, like Tom Lapslie, Frankie Kent and Sammie Szmodics have done, coming through the academy system and now approaching 100-150 appearances for the club.

You played for Trammere Rovers, Ipswich Town and Burnley. How do you look back on your playing career. Do you have any particular highlights?

I do, I have highlights of all three of the teams to be honest.

I started off at Tranmere Rovers and there was a group of Scouse boys that had a tough upbringing.

We were all released from the bigger clubs — the likes of Liverpool FC and Everton — and we came together at Tranmere under the fantastic stewardship of Warick Rimmer, who was our youth coach at the time and I have high praise for him. He has been a brilliant person in my life.

We were successful, too. In the play-offs every season. But we kept missing out for some unknown reason.

We had a certain John Aldridge in the team who would score 30 to 40 goals a season, so they were fond memories.

I managed to get a fantastic move to Ipswich Town where they had missed out on the play-offs two or three years in a row.

Along with players such as Gary Croft and Jermaine Wright, Marcus Stewart and Martijn Reuser we were able to then take that next step from getting into the play-offs, winning it, and then gaining promotion to the Premier League which was a huge highlight.

The Premier League is a fantastic league now, but when I look back on when I played in it, rubbing shoulders with some unbelievable players — Juan Sebastian Veron, Roy Keane, David Beckham, Thierry Henry, Freddie Ljungberg — you realise the immense quality that these players had, not just Premier League class, but also international class, too.

The Premier League is flooded in this day and age, but going back then there were some fantastic players playing in it.

I scored against Everton at Goodison Park, which for me, being a massive Liverpool fan, was also a huge highlight.

Then my Burnley days, I remember turning up under Steve Cotterill on the first day of pre season training and only seven players turned up.

He was trying to build a new team and he kept reassuring me that things will definitely change, and they did change.

I believe that Steve Cotterill was successful at Burnley because we had limited resources in the Championship and he managed to bring in the likes of Frank Sinclair, Micah Hyde, and Michael Duff, and we became a difficult team to beat.

As a team we knew what we were good at and I took a lot from playing under managers such as Johnny King, John Aldridge, George Burley, and Steve Cotterill and I notice that in some of the things that I now do as a manager.

On this day in 2002: #itfc beat Tottenham 2-1 at Portman Road, thanks to goals from John McGreal and Marcus Bent. pic.twitter.com/ONtgs825sG

You mentioned picking the brains of different managers. Are there any in particular that you spoke to before entering football management?

I picked the phone up straight away and spoke to my last manager, Steve Cotterill, at great length, as he has fantastic experience throughout the divisions, winning promotions, and has been with different teams and he was brilliant for me.

When I took the Colchester United job I spoke to Paul Cook who was former team-mate, and through the League Managers Association (LMA) I have a manager mentor, and funnily enough it is my old manager at Ipswich Town, George Burley.

I live in the Ipswich area and so does George. He is now my mentor and I get to see him on a regular basis and I pick his brains with his wealth of experience. He has come down to watch a few Colchester United matches, too.

Also the contacts that I have built up in being an ex-player has helped. I would also mention Micky Mellon, who is also an ex team-mate of mine, and we have also struck up a managers friendship too.

The LMA mentor programme is something that the LMA have put in place for managers, and it offers support.

Not just for managers that are starting out like myself, but also for experienced managers.

Ex-football managers all over the country will link in and hook up with managers that are taking their first steps on road of management, offering their knowledge and experience. It is a fantastic thing to have, and a brilliant support mechanism.

Finally, John, as you say you are just starting out in football management, what would you like to achieve in your managerial career?

I want to keep trying to win football matches, but the biggest thing for me would be the longevity of it.

You look around up and down the leagues and not a lot of managers get enough time to instil what their principles and DNA are, and I do not think that is going to change, as it comes with the territory.

I would love to manage one of the teams that I played for like an Ipswich Town, for example, or a Liverpool FC. With their rich history and the high esteem they are held in that would be a dream come true, but it is about continuing to do the groundwork here at Colchester United as well.

We want to be successful and we feel as though we are really close. In two of the last three seasons we have missed out by one point. We are hoping this season to make that step into the League Two play-offs.