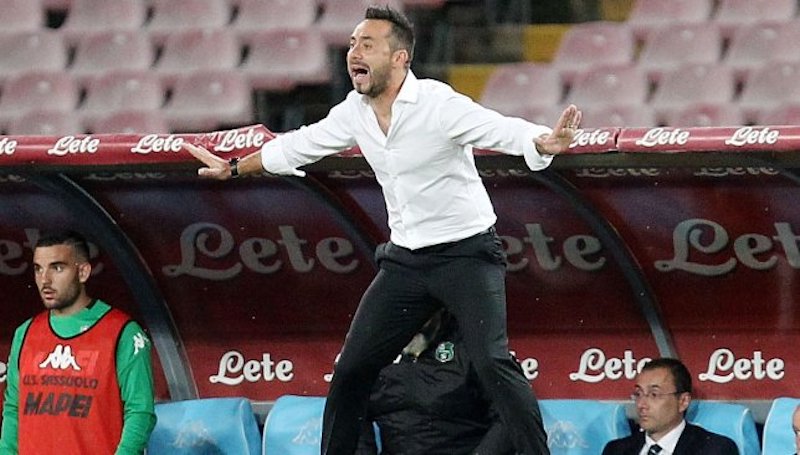 After consecutive 11th place finishes in Serie A, Sassuolo will be looking to take the next step.

The Emilia-Romagna club appointed one of the best up and coming tacticians in football when Roberto De Zerbi the reins.

As a player the Brescia born 40-year-old was an attacking midfielder with a cultured left foot, and after retiring in 2013, he wasted no time in moving from the pitch to the bench, taking over as manager of Lombardy club Darfo Boario.

He quickly started making a name for himself, winning a Coppa Italia Lega Pro with Foggia. On the back of this, Palermo’s owner Maurizio Zamparini hired him for the Sicilian club, but it ended badly and he was fired after less than 3 months in charge.

His next gig would prove to be a turning point, but not necessarily in the way one might think.

He was hired by Campanian club Benevento and developed a reputation for setting his teams out to play an attractive brand of football. The club were relegated, but his possession based game brought many plaudits and he was given the job at Sassuolo.

Think Aurelio Andreazzoli at Empoli last year, who has been hired by Genoa for the new season.

In his first season with the Neroverdi, he was able to implement his philosophy, setting up mainly a 4-3-3 system looking to dominate possession.

But while the attack was able to amass 53 goals–the ninth most in the league–their defence suffered as a result, allowing the fourth most amount of goals with 60.

With any new manager a grace period is expected, and after a consolidation of last year De Zerbi should be expected to take the club to the next step.

As with most clubs of their stature, Sassuolo–who will be celebrating their centenary during the coming campaign–have had to sell key parts of their squad.

After Inter confirmed the permanent move for right winger Matteo Politano, the Nerazzurri doubled up, purchasing midfield dynamo Stefano Sensi in a similar deal with an initial loan fee.

Those transfers brought in a total of around €46m, but while the departures will have been a bitter pill to swallow to the fans, they have acquired adequate replacements in the summer transfer window.

Striker Francesco Caputo has been recruited from relegated Empoli on the back of an impressive 16 goals in the league last season which saw him finish sixth in the Capocannoniere race last year.

He is expected to fill the central striker’s role in De Zerbi’s team, allowing them to vary the attack. The Altamura born forward can hold the play up and wait for his teammates to come into the attack, run on to through-balls–the likes of Domenico Berardi & Jeremie Boga can supply the passes, and link up with the midfield as he was able to do countless times last year in Tuscany.

Caputo will have a familiar face at Sassuolo as they also snapped up 19-year-old central midfielder Hamed Traore on a two year loan deal.

The Ivorian, who made his debut this year for his nation’s U-23 team, can provide steel and tenacity in the middle of the park, along with the ability to link the play quite well.

We may be in store for a few one-twos between the former Empoli pair.

Added to Traore in the middle, we see the return to Italian football of Pedro Obiang after a four year stint in the Premier League with West Ham United.

The Equatorial Guinea international previously had a successful five year run with Sampdoria. His experience in Italy, coupled with his ability to play just in front of the defence, should give De Zerbi a pivot in his three-man midfield, which should free up Manuel Locatelli, Alfred Duncan and Mehdi Bourabia to play more in the attacking third.

At the back De Zerbi requires his defenders to be switched on tactically and technically sound as well, as his teams invariably play out from the back.

So don’t expect to see route one or long ball tactics when watching Sassuolo and, let’s be honest, we can all appreciate the quick one-touch passing game.

Sassuolo owner Carlo Rossi has been able to negotiate for a fair few promising defenders.

Wing-backs Rogerio, Marco Sala and Jeremy Toljan have been acquired for a total of €13.5m, with the later on a loan for €2.5m. Some may be thinking ‘who are these guys?’

The fact that these three were on the books of Juventus, Inter and Borussia Dortmund, means that they have the ability, but now it’s up to them to showcase it.

One thing De Zerbi has been criticised for is that at times his defenders are spread too far apart, leaving themselves vulnerable to a forward press by the opposition.

Here is where he can improve, and if he is able to adapt his defensive tactics with these new defenders, all of whom are in their early 20s, he will have grown as a tactician.

The Neroverdi are entering their seventh consecutive season in Serie A after making it to the top flight for the first time ever back in 2013, and with both the manager & the club looking to improve on previous achievements, it might be “Sassuolo in seventh heaven” come May 2020.