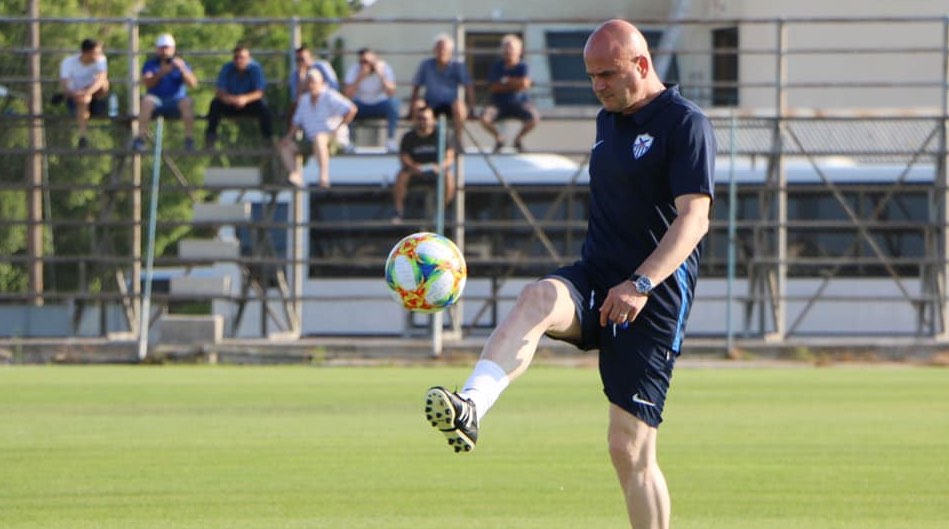 James Rowe spoke to Anorthosis Famagusta manager Temur Ketsbaia exclusively for WFi. They discussed his time in England with Newcastle United, the challenges of international management, and the biggest influences on his career.

You are in your second spell as manager of Anorthosis Famagusta in Cyprus. How are you enjoying being back at the club and what do you feel is the main challenge as manager this time around?

I played for Anorthosis Famugusta during my playing career and I have been involved with this club for more than eight years.

The last years I have been away from Cyrprus managing the Georgian national team, and working in Greece and Russia too.

The last ten seasons have been very difficult for Anorthosis and the last time they won the Cypriot Championship was with me, and now I am back again.

It is difficult to say what my goal is because during my first spell in charge we won two Cypriot Championships, Cypriot Cups and we managed to play great football in Europe too.

The only thing left to do is win the Champions League, which would be very difficult!

As a team, our goal is just to win the Cypriot Championship again, and we will try to do our best to build a team to be able to do it.

I am confident that we will have a good season.

I look back with pride on my career in that all the teams I played for were challenging for trophies, even Newcastle United when I was playing there, we were playing in FA Cup finals and playing Champions League football, and they were great times.

I am pleased to have won trophies for the teams I played for, winning the Georgian Championship twice with Dinamo Tbilisi.

I also played one season for Wolverhampton Wanderers and we had big dreams, but unfortunately things did not go in our favour. There were many changes in the coaching staff and the team but I still have good memories of my time at the club.

I am proud that all the teams I represented were playing for something, and I have been fortunate to win many trophies.

My biggest achievement is playing for the Georgian national team, scoring 17 goals and competing in World Cup and European qualification.

You lead me really well on to my next question, Temur. You managed the Georgian national team for five years. How was it for you to manage the country that you represented, and what were your biggest challenges?

It was not an easy job to be honest. When you are managing the national team and you know that almost 80 percent of the matches are against better opposition.

During my tenure of 40 matches we won 13, drew 9, lost 18, and we had very good results against France and Croatia who are very good teams.

I knew from the beginning that it was not going to be easy to manage the national team, as before I became Georgia manager they had played about 60 matches, won only one, and lost 13 consecutive games.

My country asked me, and at that time I had just helped Anorthosis to win the Cypriot Championship and then I went on to become Olympiacos manager and they had just qualified for the Champions League.

I did not have much time to think about taking the job. They called me and they asked me and I could not say no.

It was maybe not the best decision for my career as a manager, but I could not say no to my country and I remained Georgia national team manager for five years.

I do not regret my decision because when your country calls it is difficult to let the national team down, so you can’t say no for many reasons.

Do you notice a clear difference between international football management and club management?

At club level in the bigger leagues you get to pick from world class players in squads.

There are many challenges at international level and many difficulties, but they cannot change after only one match.

It may take ten or twenty years to have a talented group of players coming through.

You have spoken about your playing career and how much you enjoyed it. Could you say who are the best players you played alongside?

I was very fortunate that everywhere I played I had very good players beside me, during my time in Georgia, Greece, England, and in Scotland, too.

I played with Alan Shearer, Philippe Albert, and Ian Rush at Newcastle United. Georgi Kinkladze and Levan Kobiashvli with the Georgian national team.

There have been many players — Robert Lee and Faustino Asprilla also.

I have played with some great names and I really enjoyed it.

I am pleased that I had a good relationship with players at all the clubs I played for.

I can imagine at the level you played you came up against some difficult opponents through the years. Are there any that stood out?

I played against many talented teams at club level and also international too, but if you talk about the importance of the match that I played, I would say that was when Anorthosis played against Turkish team Trabzonspor.

It was more than football, and was like a victory not only for my team but the country of Cyprus and its inhabitants. The whole country was celebrating because of the occupation of 40 years, and we beat them 3-1 here in Cyprus and lost 1-0 in Turkey. We qualified and all the people in the country were out on the streets celebrating.

This is one of the peak highlights of my career, together with the two FA Cup finals I played with Newcastle United in 1998 and 1999.

It is a shame we lost, but it is still very memorable for me.

I managed to attain it twice as a player and a manager, and on all occasions it was very memorable for me.

Finally, Temur, you have played under fantastic managers during your playing career. Are there any that played a key role in your development, and are there any that gave you advice when you first entered football management?

I have been lucky to be honest during my career, to have traveled around Europe and to have played under many great managers, who not only taught me how to play football but also how to manage.

I played under Anghel Iordanescu here in Cyprus, and in England with Kenny Dalglish, who brought me to Newcastle United, Ruud Gullit, and Sir Bobby Robson.

Bobby Robson in particular had a great communication with the players, and he is someone who would give you the opportunity to express yourself.

He always helped to get the maximum out of the players, and this is important for a manager.

He definitely had a talent in getting the best from his players, and that it not easy to do. It is easy when you have millions of pounds to spend as you want, but when you have no money, you are handicapped in bringing players in to your squad, and you turn to younger players — the quality of a good manager is getting the best out of young players.

Ivano Bonetti at Dundee, and Colin Lee at Wolverhampton Wanderers too.

I do not want to forget anyone because I am thankful to everybody I worked with as a player, because if I have had some success in my career as a player, all the managers have played an important role in that.