Tomasz Skublak On Returning To Canada, Polish Roots And Admiration For Lewandowski & Piatek 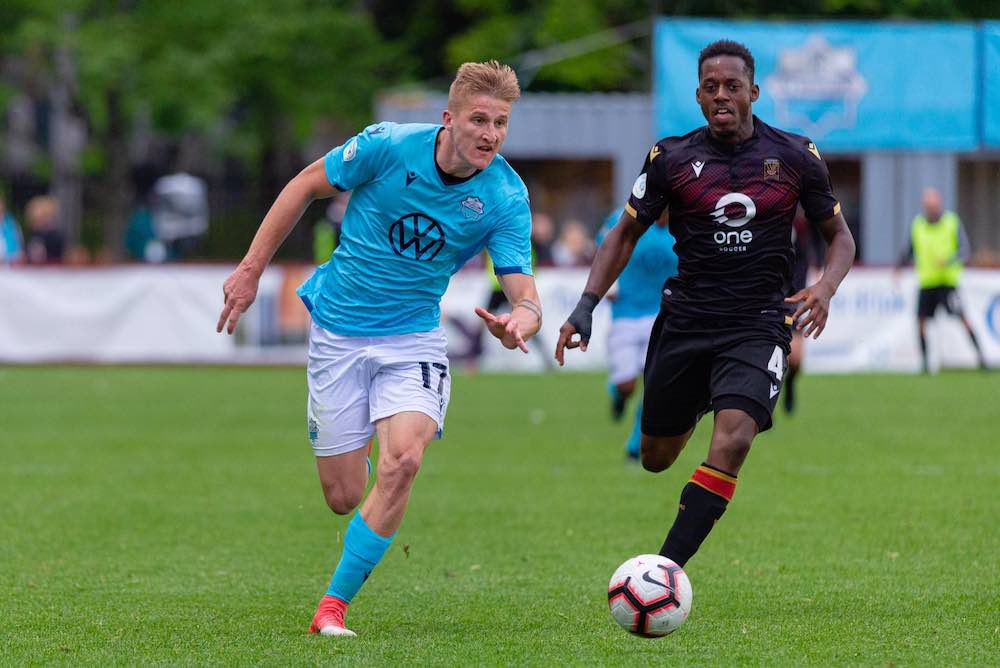 How did your signing with Halifax come about exactly? Did you attend preseason with the Wanderers?

“Actually, I didn’t do preseason with the Wanderers, I was with York 9 and then basically after that there was no negotiation between the two of us.

“I got a call from Stephen Hart from a recommendation he had, and once I went down to Punta Cana I was offered a contract.”

Being from Hamilton, it must be nice to to have family and friends come to the stadium and cheer you on.

“Yeah, it’s always great to see your family again. It’s kind of getting a little vacation when you get to see them because it brings back memories from home.”

Do you see them much when the club is visiting, or do you have to stay professional and stay at the hotel?

“No, you’ve got to stay professional always, but you know you can go out for dinner, and whenever you’re available during the day or the day after the game, sit down, chat with them, catch up and honestly just enjoy their presence until you’ve got to go back.”

Can you speak on your time with the Vaughn Azurri in League 1 Ontario and how it’s proven to be a very good pathway for Canadian players?

“I feel like the pathway I took with Vaughn Azurri was really good. The team was strong leading up to a couple years ago, and the team did very well in League 1 [Ontario].

“I think there was a lot of talent that could have come into the CPL, and obviously the coaching and the practices were excellent for development.

“I think that was super important for myself and for a couple friends of mine that have also made it into the league.”

Any guys that you played with?

“I played with Matthew Arnone and Jace Kotsopoulos — those are two really good players. One that unfortunately hasn’t got as much [playing] time as I think he should have got but that’s football obviously.

“Matthew has done really well as well, especially winning the award for the player of the year here at the Wanderers, so I’m really happy for him.

What would you say are the biggest differences between USports and NCAA is?

“In USports there are some good teams for sure [but] NCAA is just on a different level.

“They just have a lot more resources, so facilities, organisation, travel — the stuff that helps you with all the performances like sports doctors, physicians, nutritionists — all these people are super important for improving your game by a couple percent, and it’s a big difference at the end.

“So obviously the amount of resources American teams have, and the skill training they also have definitely puts USports in no comparison.

“However, I do believe that there are some teams that, when I was playing at the time, can definitely compete in the NCAA and have a good record.”

In your four years that you attended University, can you tell me about your time off the pitch – what degree you studied and the memories that you made as well?

“When I was at the University of Guelph I was studying human kinetics. I made a lot of friends with the other teams that were in campus, especially the swimming teams. I got really close with a bunch of swimmers.

Then I went to the University of South Florida where my degree changed to biological science major, with a minor in business, because of the credit transfers.

Obviously, having that Polish heritage has to be a big influence in liking soccer. Do you have any memories at all watching on TV being young?

“Yeah my grandfather was a huge FC Barcelona fan, so we used to watch Lionel Messi all the time. He was his favourite player and we used to argue all the time who was better Messi or Ronaldo.

“At the time I was 12 years old so I had a lot of good memories with him and then unfortunately he passed away, but I definitely keep a rivalry at home.

“My brother is an Arsenal fan, I’m a [Manchester] United fan, so whenever they play we always either bet on the game or be able to mock the other person. If your team wins, you have bragging rights so it’s definitely really cool.”

You must have watched Poland at the World Cup? Any player that is your hero from there?

“Definitely, I watched it with the whole family, it was really nice. Lewandoski — he’s a great player, fantastic finisher, and obviously a very big name in polish football, as well as Krzysztof Piatek, who’s also one of the players I really like watching.

“Those are the two players that I like to call my favourites from the national team.”

Do you have a polish passport and if so would that open up a lot of doors for you by being in the EU?

“I do not as of right now, but I am going to be getting one probably in the next month.

“Yes I do think that will definitely help me open up doors later down the road.”

How do you analyse your first pro season, and which of the goals that you either scored or assisted stands out the most?

“Well obviously the goal that I scored against Ottawa is probably the best goal that I’ve scored this season, but just the memories that we’ve made with the guys — just being able to go pretty deep into the Canadian Championship was super cool.

We had what we needed against Ottawa Fury but we couldn’t hold on to it to play Toronto FC, but that’s football. So yeah, that’s definitely one of my favourite moments.”

Tomasz Skublak gives @HfxWanderersFC the lead on the night with some brilliant footwork. It’s 3-3 on aggregate!

Would you say the Canadian Premier League was made for guys like you?

“No I don’t think that it is. I think it’s more of a long-term league for the hosting of the World Cup.

“I feel like, for me right now, it’s more of like the first two to three years of this league is more a trial run to see how we can produce good players four-five-six years down the road.

“But it’s definitely a good starting point for a resume, and to help you move to the next level, whether it’s Europe or even the US, or anywhere that has a more well known league.

“It is a really good developmental league for athletes here in Canada and gives them a chance to showcase themselves.”

Is it special to play in Canada as a Canadian, but also on the Atlantic coast where it’s own soccer culture is forming?

“It’s definitely been forming, it’s really cool to play in Canada as a Canadian player — there’s a lot of talent here and it’s a good way to showcase that.”

Is the U23 National Team a goal for you, to be part of that March squad?

“Yeah that would be fantastic. Obviously everyone’s goal is to get some caps for the national team.

“It’s just whether or not they like the way I play. I just need to keep pushing and hopefully have a good season next year to get a call up.”

Is centre forward the position with the most pressure, in your view?

“For me, it doesn’t seem like there is a lot of pressure. I guess you could say playing as a forward on the team that’s at the bottom of the league is difficult because you obviously have so many chances that you can’t utilise to make a difference.

“If you don’t do that, while other strikers might get more chances, then things might not turn the way you like them to, but you’ve got to keep your head up and keep moving.

“Honestly, pressure is more of a mental thing, and if you can bypass then it’s super important for players so they can move forward in their career.”