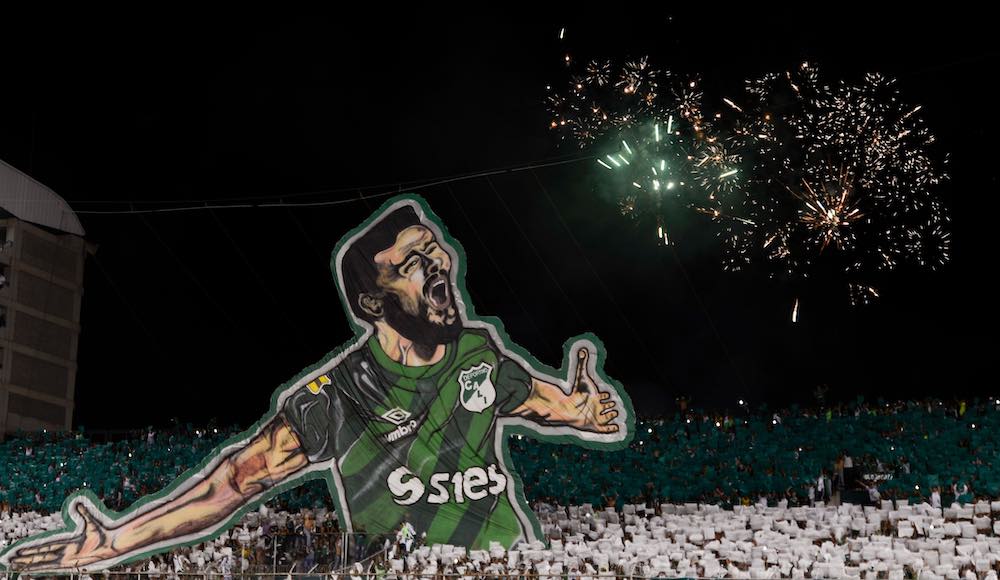 Diving headers, comebacks and a little bit of showmanship. The Copa Aguila final lived up to expectations and with the scores at two apiece, it means everything is to play for heading back to Medellin.

The Estadio de Palmaseca was the scene for the first leg in the Copa Aguila final. Deportivo Cali and Independiente Medellin have had to scratch and claw just to reach the final, and both showed that they were not going to have their hard work be for nothing.

An energetic crowd watched on as the teams walked out onto the pitch for the pre-match necessitates with both teams understanding the importance of gaining an advantage going into the second leg and using that advantage to bring the cup back to their respective fans.

Cali’s triumph did come in the current cup format, when they beat Rionegro Aguilas to lift the cup in 2010.

The first couple of minutes was typical of a cup final. Both teams weren’t exactly nervous but you could see that they were trying to feel each other and spot potential weaknesses.

The first real chance also turned into the first goal of the game, and would become key in this game for both teams.

DIM attacked down the right-wing and after a ball out wide to Deiner Quiñónez, who played an inch-perfect cross. Didier Moreno was the target, and he had positioned himself perfectly in-between to the two defenders. Moreno made the finish look easy as he guided the ball into the far corner.

Ten minutes in and DIM were ahead, it was the perfect start and allowed them to play the way they wanted and force Cali to beat them rather than beating themselves by committing too many men forward and leaving them vulnerable.

It couldn’t be said that one team had control over the other in the first half, and it was a very even game.

Early on the ref was sounding his whistle like he was at a rave and it didn’t allow the game to get into full flow. Luckily this wasn’t a theme of the entire match and it seemed like the atmosphere energised the game and especially the home team.

Cali’s game plan was to put as many balls as possible into the box to create chances and put their strength and size to use. They whipped crosses in from unorthodox positions, but it worked, and it was clear why they stuck to this game plan as created numerous chances, and eventually the equaliser.

A quick break allowed the players to get forward and look to create a real chance. Cali whipped in a glorious ball from around 25 yards out, finding Juan Dinenno who had continued his run having been left unmarked.

He timed his run perfectly and connected with a  diving header that he made look very easy. With the score at one apiece, only 33 minutes gone and both teams looking evenly matched, it was making for a very interesting and enjoyable game.

The game seemed to be heading into half time with the scores equal, but in stoppage time DIM managed to get an attack going down the left-wing and drilled in a low cross that was aimed at Germán Cano.

After a missed clearance from the defence and a deflection, the ball landed at the feet of Andrés Ricaurte, who blasted the ball towards goal only for it to strike the arm of defender Richard Rentería, who slid across the box looking to block the ball.

The referee wasted no time making his decision. He pointed towards the spot and dished out a yellow card to Renteria.

There was no doubt who would take the penalty as top scorer and captain Cano stepped up and expertly blasted the ball into the bottom left-hand corner. While the keeper did guess the correct way, there was no stopping the penalty and DIM went into the break ahead.

The teams came out from the break and before DIM could get a hold of the game and defend their lead Cali had won themselves a free kick in a dangerous position just a couple minutes into the second half.

They sent in a very teasing cross and a missed time diving header resulted in the ball bouncing off the chest of a defender.

The ball dropped at the feet of Déiber Caicedo who, from four yards out, left nothing to chance and smashed the ball into the back of the net. The crowd burst into life and suddenly the game was all square.

After the goal, you could see the confidence rise in the home team and the players realises they could take control and push DIM back.

Cali continued to try to take advantage of the brilliant crossing they showcased in the first half.

DIM set up to absorb the pressure and, when the opportunity presented itself, break on the counter and look to steal a winner.

This is what almost happened when late into the game DIM managed to break with numbers.

The counter-attack wasn’t exactly textbook, but Cano managed to pick up the ball just inside the 18-yard box and hit one across goal.

It beat the keeper and looked like he had put his team ahead like he has all season but instead it hit the inside of the post and ran across the face of goal. It was a real chance for the away team to leave Cali with the win, but it wasn’t to be.

Cali continued to pile on the pressure but with ten minutes to go they once again shot themselves in the foot. It was Renteria that had slipped up and a second yellow card was issued meaning his side had to play the last ten minutes with ten men.

Even with a disadvantage, if any team was going to sneak a winner it looked like Cali, as they continued to push forward, but it wasn’t to be as the referee blew for full time with the final score at two apiece.

A very entertaining and exciting game at The Estadio de Palmaseca, it has left the door open for both teams in the second leg and claim their second Copa Aguila.

Whoever wins, if the next leg is more of the same then we are in for a treat and a worthy winner will be crowned.