A Union In Berlin: Bundesliga Prepares For First Berlin Derby 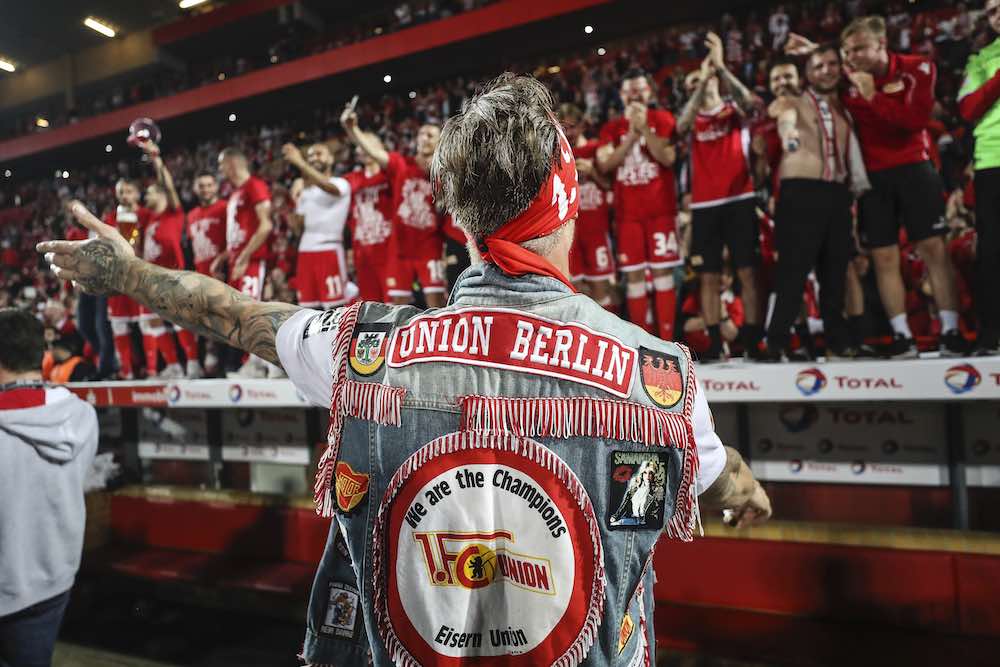 Berlin will witness its first-ever east-west derby in the Bundesliga this weekend when Union Berlin host Hertha BSC on Saturday.

Union secured promotion to the top-flight in dramatic circumstances last season, defeating Stuttgart in the Bundesliga’s promotion/relegation play-off, and in doing so became the first 2. Bundesliga [second division] side to win this fixture since 2012.

They were fined €56,800 for their post-match celebrations during which fans filled the pitch celebrating this momentous occasion with songs and pyro. It was a taste of what they would bring to the Bundesliga.

Since that moment in May, supporters of both clubs have eagerly anticipated this game, which isn’t quite as bitter a rivalry as it might be considering the circumstances. It will nevertheless be a keenly contested fixture which could set the tone for future meetings between the two sides.

Given the history of Berlin as a city once divided, with the western part marooned in East Germany and eventually separated by a wall, it would be easy for such a rivalry to be based on politics and historical divides.

But even during the years of division Union Berlin was more of a united presence, spawning naturally as a club of the people rather one run by an official organisation such as the Stasi backed Dynamo Berlin.

This division is demonstrated in the image below showing the makeup of Germany shortly after the war. West Berlin is indicated by the small section of grey, amid the red showing East Germany, the light grey areas indicate territories annexed by Poland and the Soviet Union. 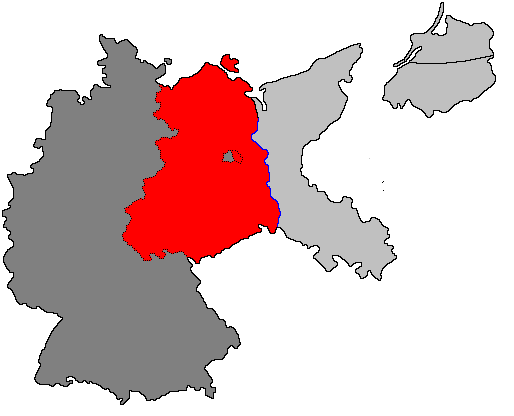 Union Berlin’s outlook on the game became evident when they faced RB Leipzig in their first-ever Bundesliga game. In many ways, it was fitting that they should face a side from east Germany with whom they have nothing in common, and one which they actively dislike due to the Leipzig club’s Red Bull sponsorship.

“After 10 years an eastern club is in this league again,” read one banner at that game which ignored their opponent’s existence, with the fans also holding a 15-minute “atmosphere boycott” against the Red Bull sponsored side they believe is the antithesis of their club and their idea of what football should be about. 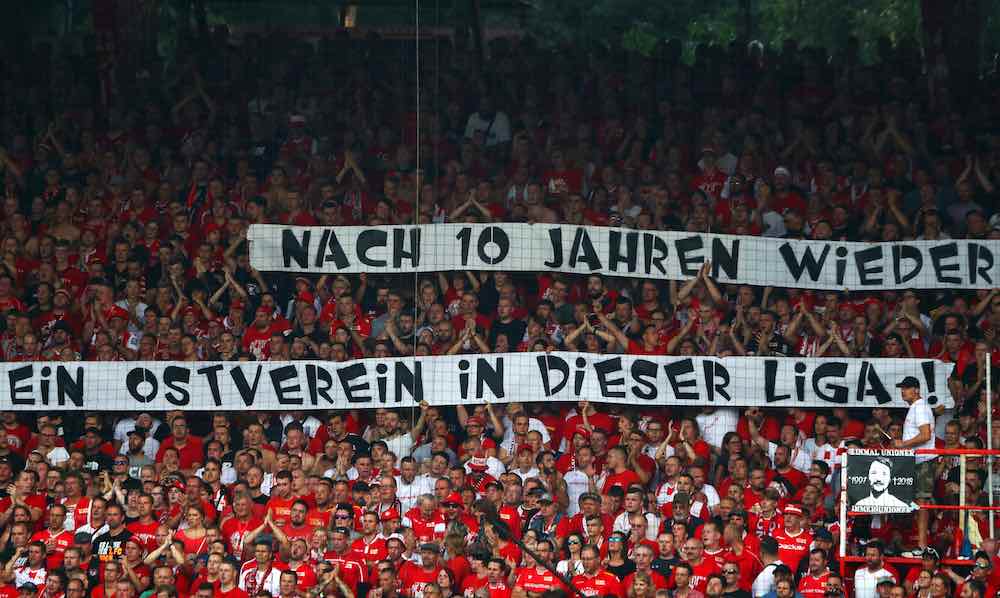 When the 15 minutes ended, the Union fans showed what they themselves are all about, as seen in the video below.

When speaking to fan groups and people involved with Union Berlin, it becomes evident that this isn’t a club defined by any political aims, but by the actions and words of the supporters who built this club, quite literally in many cases. 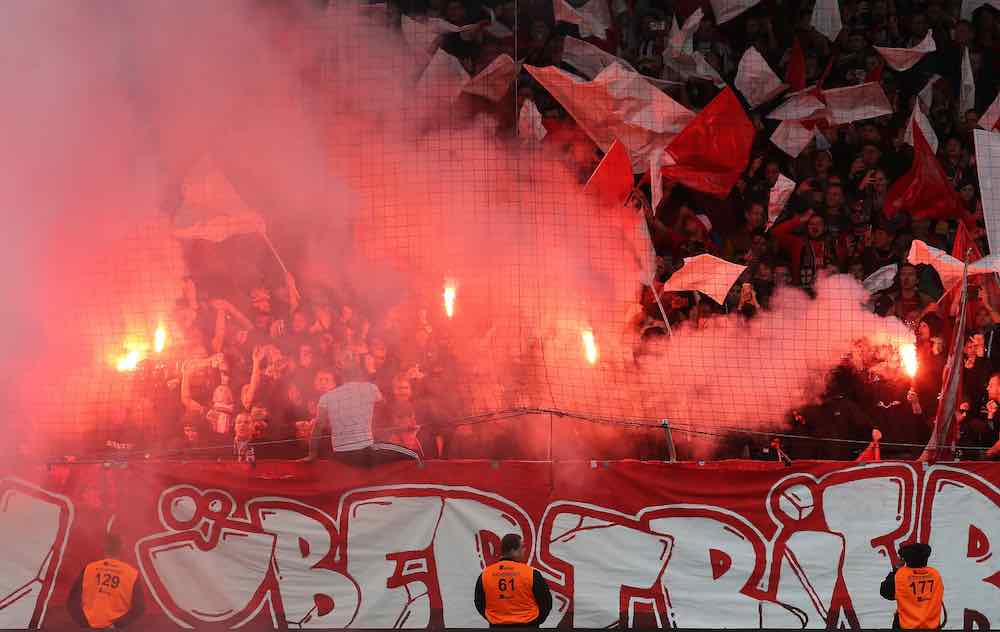 Union play at what might be considered a more traditional football stadium, the Stadion An der Alten Försterei (Stadium At the Old Forestry), which is tightly packed and located in a suburb.

The location in Köpenick, on the edge of a forest and a short walk from the banks of the river Spree, gives the club a more traditional feel in comparison to Hertha Berlin’s grandiose home, the Olympiastadion.

Although this is a derby of Olympic proportions, it is perhaps fitting that the first game of this season’s double-header, and the first derby to take place in the Bundesliga, will occur in the confines of the 22,000 capacity Alte Försterei.

The interest in this game is such that Union Berlin were not able to accommodate all of the media applications they received, and the tightly packed press box in the stadium will be even more cramped thanks to the increase in international intrigue this momentous occasion has brought. 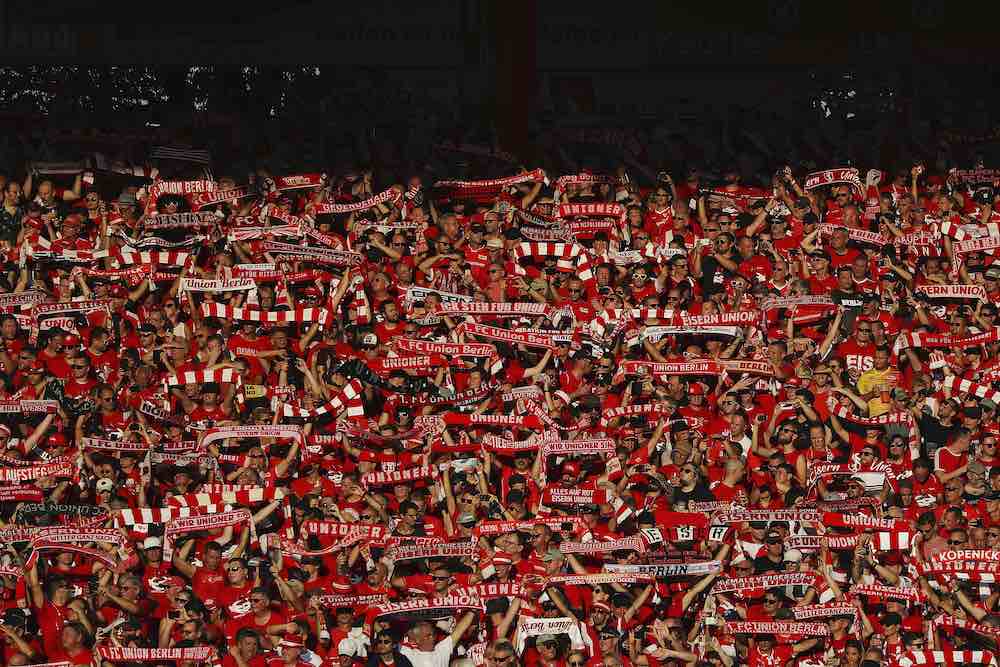 Union were expected to battle against relegation this season, and this is the situation they find themselves in at the moment. Though they are not currently in the relegation zone, they are on the same amount of points as two of the teams which are — FC Köln and Augsburg.

Sebastian Andersson and Marius Bülter lead the club’s scoring charts with three apiece, but along with Köln they currently have the least productive attack in the league, having only scored nine goals in nine games.

This is only two fewer than fourth place Wolfsburg, though, and there are plenty of opportunities for clubs to shoot up the table if they manage to string together a few wins in this so far unpredictable season.

Union’s two victories in the league so far, especially their 3-1 defeat of Dortmund at Alte Försterei, will give them encouragement, but that they are playing at this level at all is a triumph in itself, and if they do go down their fans will be realistic and supportive, rather than being overly disappointed.

One example of this realism came back in 2017 when the prospect of promotion reared its head following a victory against Nürnberg. The fans in the Waldseite stand sang “Scheiße, wir steigen auf” (Shit, we’re going up”) to the players after the game!

There are actually two Berlin derbies this weekend, as Berliner AK 07 take on Dynamo on Sunday in the Regionalliga, but Saturday’s clash at the Alte Försterei will take centre stage, not only in Berlin but around the world.

Despite being such a large, sprawling city Berlin is not as well known for its football, especially when compared to other parts of Germany, and the Berlin derby is some way down the list of big-city derbies in world football.

But if Union manages to establish itself in the top division and viewers around the world get to see what the club is all about, they could raise the profile of the sport in the city, which would also benefit Hertha and further raise the intensity and competitiveness of this derby.

Look out for a review of the game in the next edition of Bundesliga Zeitung, by Andy Wales.