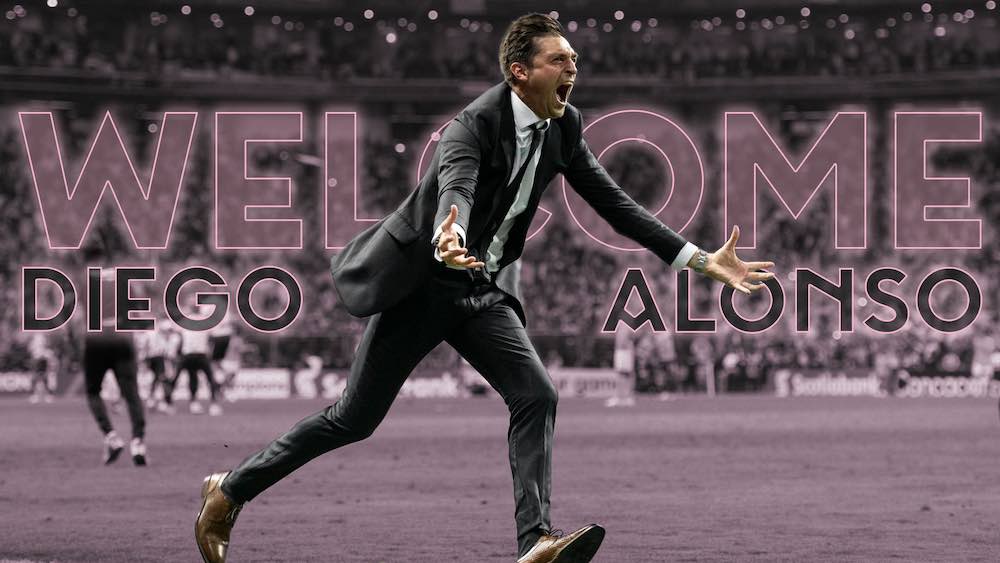 Inter Miami CF announced today it has selected Diego Alonso, 44, as the Club’s first-ever head coach ahead of its inaugural 2020 Major League Soccer (MLS) season. The Uruguayan brings an attractive attacking-style of fútbol to Inter Miami, which has led him to become the only coach to win the prestigious Concacaf Champions League with two different teams.

“In Diego we found a manager that fits our culture and has a strong desire to build a winning club for our fans. He brings a lot of experience and championship-winning mentality as we begin our drive to be among the best clubs in the Americas,” said Inter Miami CF Sporting Director Paul McDonough.

“We have big aspirations for our club and believe Diego has the right drive, passion and leadership to accomplish our goals.”

Alonso joins Inter Miami after an impressive stint in Mexico, where he won three titles, qualified his teams to two FIFA Club World Cups, reached two cup finals and developed some of the country’s best players in only five years.

Most recently, he led C.F. Monterrey from May 2018 until September 2019, and only a year after his arrival, he guided the team to the prestigious Concacaf Champions League title, the continental competition that crowns the best team in North America, Central America and the Caribbean, triumphing over rivals Tigres UANL in the final on May 2019.

The victory earned Rayados a spot in the 2019 FIFA Club World Cup. Alonso also led the team to the 2018 Copa MX Apertura final in his first year.  Overall, Alonso lead Monterrey for 72 games, scoring a total of 118 goals and conceding only 80 for a final record of 39 wins 13 draws and 20 losses.

Prior to taking the job with Monterrey, the attacking-minded manager spent over three years as head coach of Liga MX side C.F. Pachuca, taking over in December 2014. Alonso led the team to the 2016 Liga MX Clausura league title and a 2017 Copa MX Apertura runner-up finish.

He also led Pachuca to the 2016/17 Concacaf Champions League title, which qualified the team for the 2017 FIFA Club World Cup. Los Tuzos then achieved a historic third-place finish for the first time ever in the competition.

Alonso is the only head coach in history to win the Concacaf Champions League with two different teams and is now only the second current MLS coach to have won the competition, in its current format.

Alonso’s attacking style set impressive numbers for Pachuca, including 36 goals scored in the 2016 Liga MX Apertura, the team’s second-highest amount in an Apertura or Clausura league campaign and its highest since the 2009 Clausura.

In 2016/17, Los Tuzos also scored their second-most goals at a Concacaf Champions League season with 29, while only conceding eight, their fewest ever at the competition. In three and a half years, Alonso managed Pachuca for 169 matches, registering 287 goals and conceding 213, resulting in 74 wins, 46 draws and 53 losses.

The Uruguayan will aim to continue his dominance against MLS teams with Inter Miami. During his successful Concacaf Champions League runs, Alonso eliminated three out of his four MLS opponents. In 2016/17, Pachuca defeated FC Dallas, who had qualified after recording their most successful season ever, by a 4-3 aggregate scoreline in the semifinals.

Two years later, in the 2018/19 season, Alonso’s Monterrey beat then-MLS Cup champions Atlanta United by a 3-1 aggregate score in the quarterfinals before outscoring the 2017 MLS Cup winner Sporting Kansas City by an imposing 10-2 aggregate in the semifinals.

In addition to the numerous accolades accomplished in his managerial career, Alonso is also known for the development of top young talents. In Pachuca, the Uruguayan played a key role in the growth of youngsters Hirving Lozano, Erick Gutierrez and Rodolfo Pizarro.

Most notably, Lozano was the leading scorer in the 2016/17 Concacaf Champions League championship season with eight goals in eight matches, became one of the Mexican National Team’s best players and is currently in one of Serie A’s best teams, S.S.C. Napoli. Gutierrez and Pizarro were regular starters under Alonso and now are also regulars for the Mexican National Team, having recently being called to El Tri ’s 2019 Concacaf Gold Cup championship-winning run.

Prior to his time in Mexico, he managed two of Paraguay’s most prominent teams – Club Guaraní in 2012/13 and Club Olimpia in 2014 – as well as coached Club Atlético Peñarol in 2013, the Uruguayan first division club named the International Federation of Football History & Statistics’ (IFFHS) South American Club of the Century.

Alonso began his managerial career at the club of his youth Bella Vista in Uruguay in 2011, where he rose through the academy system as a player to make his professional debut in 1995.

As a player, Alonso represented the Uruguayan national team, where he featured in the country’s run to the 1999 CONMEBOL Copa América final.

On the club stage, the former striker’s accolades include leading Spanish side Valencia CF to the 2000/01 UEFA Champions League final, being part of the Club Atlético Peñarol squad that made it to the Copa Libertadores final in 2011 and that won the 2009/10 Uruguayan first division title, winning the 2004 Liga MX Apertura championship and 2004 Campeon de Campeones cup with Pumas UNAM, and promoting Atlético  de Madrid to Spain’s top division as the league’s leading scorer with 22 goals in 2001.

Club Internacional de Fútbol Miami will play all of its home matches at Inter Miami CF Stadium in Fort Lauderdale starting with the first-ever match on Saturday, March 14 against the LA Galaxy.

Located off Commercial Boulevard and I-95, the stadium stands adjacent to the Club’s new 50,000 square foot state of the art training facility, which includes seven professional fields. The facility will be the home to all Inter Miami teams including MLS, USL  League One and Academy. It will also host international clubs, tournaments and local high school sporting events.