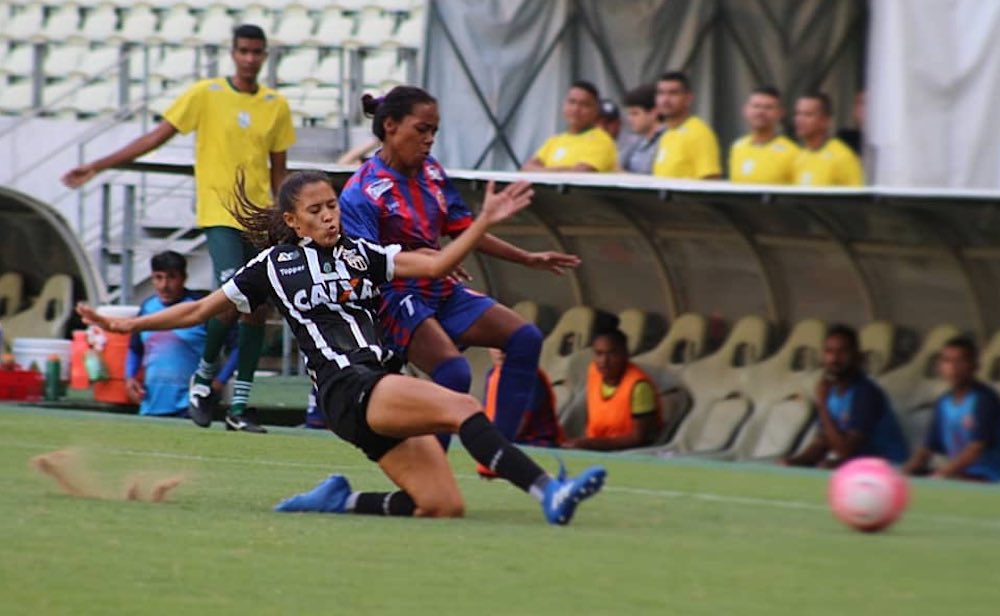 Women’s football has been on the rise in Brazil since the early 2000s. After last year’s World Cup in France that growth has continued with more interest than ever before, not only in Brazil but across the world.

From 1941-1979 it was against the law for women to take part in football, which seems astonishing for a huge nation like Brazil to ban a game which is supposedly ‘for everyone’, for such a long period of time.

There is no national league format in Brazil in the women’s game at the moment, with inter-state championships being the top domestic priority in the country for women’s football.

Thayanne Camurça is a 20-year-old footballer who currently plays for Ceara SC of whom she helped win back to back state championships in 2018 and 2019.

This season they also went on to win the title without losing a single game.

“Winning a competition undefeated is wonderful, and celebrating this title after a year of tiring, exhausting work — nothing is better,” Camurça told WFi.

“This title is only the result of daily work done with excellence, and it was also a very entertaining time with everyone involved.”

Growing up in Brazil, it is very difficult for men or women to avoid football. It is on TV and you’re never far away from people playing it in the streets, but Camurça found a more special reason to fall in love with the beautiful game.

“What inspired me to play ball was my mother,” she says.

“My first memories of football are when I was 6 years old and I was going to watch my mother practice and play in matches.

“I was outside playing with the ball, running onto the field. I wanted to join in and play with them, and I ended up becoming the team mascot!”

Growing up in the 00s, left Camurça admiring players from both the women’s and men’s game, which shows the growth in the prominence given to the women’s game in the country during this time.

“I’ve always admired Ronaldinho Gaucho. The guy is a wizard,” adds Camurça. “He does things that seem impossible.

Camurça also revealed some of the difficulties she had on her journey towards becoming a footballer, which she managed to use as a motivator rather than let it hinder her dreams.

“Living away from my parents when I was only 15 was difficult,” she said.

“I left home to live in another state, alone. I had to overcome my fears and run after my dreams, which is not only mine but my parents and brothers as well.

“I managed to get over it. I saw them as my biggest motivation to achieve and continue.”

“I went to Rio Grande do Sul to play at Rovani. I also went to Santa Catarina to play futsal for the Itajaí team. It was a wonderful experience where I was able to learn a lot, and enjoy many new experiences, which helped me develop.”

At just 20 there is still a long career ahead of Camurça. She is already a proven winner but is still thinking ahead to help improve herself as a player, and as a person.

“In the future, I will dedicate myself even more to football and also in work outside of football to help with my development”

Despite the growth, there is still work to be done for women’s football to grown and become more popular and draw in more crowds.

One major problem for Brazil, as in other regions, is lack of funding. This is a major reason why there is still no national domestic league, and only state championships exist.

Conmebol came up with a great idea to help the game in South America when they stated that, to compete in the men’s Copa Libertadores you must have a women’s team.

Camurça summarised the situation: “Women’s football in Brazil is not yet as valued as it should be, but it is improving quickly. We still need more recognition and more support.”