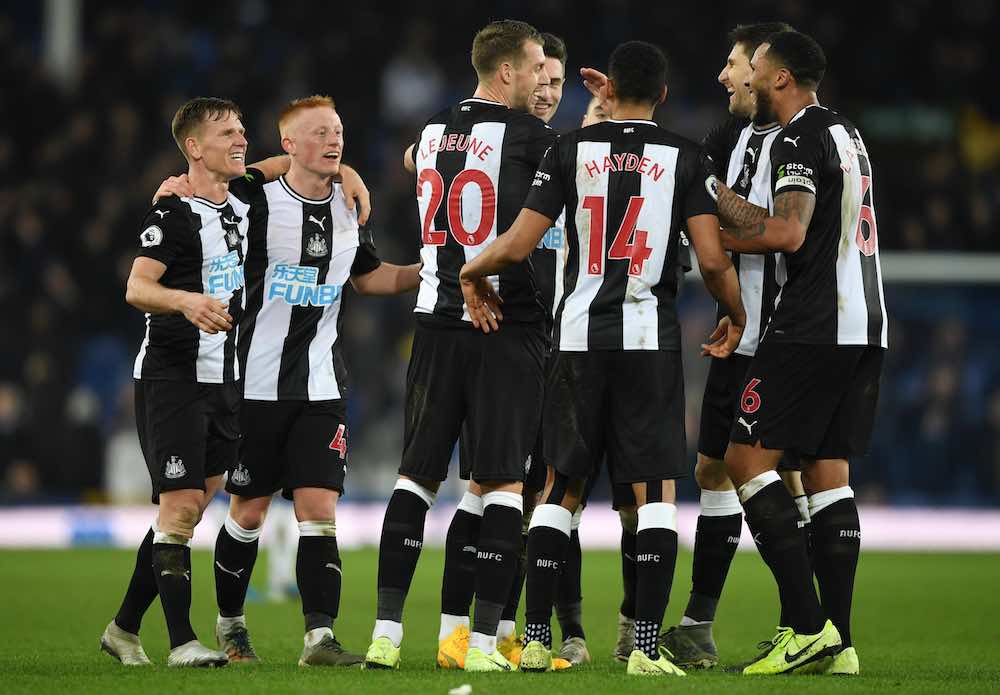 By James Nalton at Goodison Park.

Substitute Florian Lejeune stepped forward in injury time to secure a point for Newcastle in dramatic circumstances on Tuesday night.

Moise Kean scored his first goal in an Everton shirt but despite his side’s impressive display, they were unable to secure the win against a depleted but spirited Newcastle team.

The Italian opened the scoring, collecting a neat lofted ball over the defence from Bernard before slotting under Martin Dubravka once he got the ball out from under his feet.

When Dominic Calvert-Lewin added a second Carlo Ancelotti’s side looked like they would cruise to victory having controlled the game, but Lejeune scored twice within two minutes of added time to steal a point for the visitors.

“I think there are things in football that are unpredictable,” said Ancleotti.

“I think we played really well deserved to win, but sometimes you have to accept in football thangs happen you can’t control.

“We could stay more focused at set pieces, concentrate more in the final minutes, but the team played a fantastic game for 90 minutes.

“So we are disappointed, of course, but on the other side of that we are really pleased with the performance.”

Lejeune’s first effort was a spectacular overhead kick struck as the ball came back across the box after Everton failed to deal with a corner.

The Frenchman’s first goal for the club didn’t feel like it would affect the result, but when Everton failed to deal with a Matt Ritchie free kick from deep, Lejeune popped up again to score the equaliser.

His shot was saved by Jordan Pickford, but unfortunately for the England goalkeeper, he was stood behind his own line at the time.

“If anyone deserves a couple of goals it’s big Flo,” said Newcastle manager Steve Bruce. “Especially given the injury problems he has had in his Newcastle career.

“I can’t fault the attitude. It was a big struggle for us but we hung in there and we got something.”