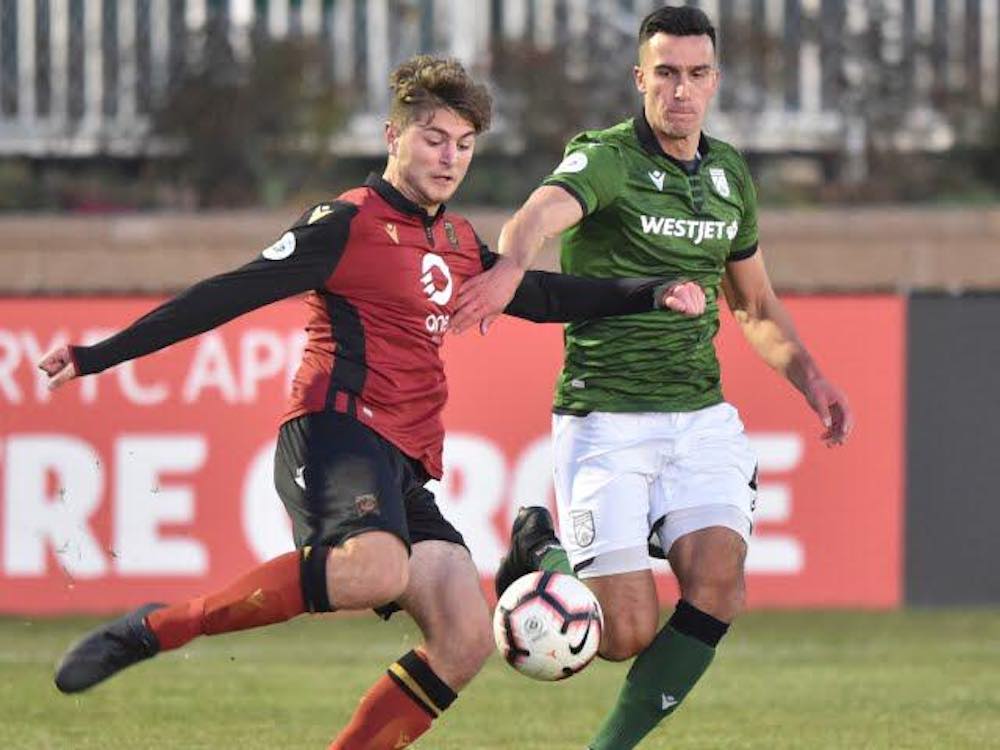 Valour FC forward Tyler Attardo has been sold to Chilean club Fernández Vial of the Segunda Division for an undisclosed amount believed to be around six figures.

The player, who has a contract until the end of 2020 is expected to move to Europe, at the latest during the summer transfer window.

The sale was planned to happen sooner with the original destination being a club in Europe during the last transfer window, but it essentially ran out of time as the window closed on January 31st.

A series of delays by the club and league operations prevented the move from materializing in time.

“The interest from Europe was real to begin with,” say’s Romero. “That’s where he was originally going to be sold to.

“This was like a back-up plan, and I have no doubt in my mind he’s a player that should be in the Canadian U20 national team for starters. He’ll be in Europe for July. He’ll do well there.

“He’s proven in this league with little service. I can imagine in South America or Europe with a real ’10’ [playmaker] giving him the ball he can show all of his quality.

Attardo, the 18-year-old who was signed to a professional contract right out of the Winnipeg Got Game trials, became the youngest goalscorer in CPL history, aged seventeen, last season.

In limited playing time, clocking just 998 total minutes in the regular season — the equivalent of 11 full matches —  still managed to score six goals. An impressive performance for the teenage striker.

Attardo will be flying to Europe in the next 2 weeks to trial with clubs.

When asked how crucial it’s going to be for him to show well helping ensure a permanent move to a higher standard of league.

“It’s going to be extremely important obviously,” he said. “I’m hoping to get out to Europe soon, trial around and get seen in some places.

“it’s important to always do well, cause if these teams see interest in me before and I come there and don’t do well, maybe they rethink their decision. Maybe they’re not too sure about it.

“So I’ve always got to make sure I’m at the top of my game and do the best I can. I’m going to work hard and try and get as many minutes as I can.”

Below is a transcription of the rest of Attardo’s interview with WFi’s Thomas Nef.

Can you tell us about the journey for yourself and your family up to this point in your career?

“Well to start on me, it’s been tough to juggle school for so many hours. So many times I couldn’t spend time with friends or go to certain occasions because of soccer. But this is something I’ve wanted, and sacrificed a lot for.

“To speak on my family, look at what they’ve done; my parents have sent me to Italy and Chile. They’ve taken me to countless practices and always believed in me from the start.

“What my whole family has done in believing in me and helping me get places, is incredible.”

How big a part did 1v1 Fútbol dreams play in your development?

“Huge! I started with [agent] Nano [Romero] when I was 15. If I didn’t start with him I don’t know where I would be today.

“Even going up to this moment, he’s helped me by being my agent and guided me in my first professional year.

“He’s been huge for my success; honestly I couldn’t thank him enough. He fights constantly for me so I have to thank him for that as well.”

“Absolutely! I Thank them for giving me the opportunity to play, and this platform that I had to prove myself on.

“It’s worked out for the best. This first year I’m getting interest [from other clubs] and continue to work as hard as I can to get more of that.”

Once the European transfer window closed, Fernandez Vial stepped up to help facilitate this next step. Even if you will not step foot in Chile. How Grateful are you to them?

“I’m super grateful for this opportunity they’re allowing me to have. It’s unfortunate that the window closed and for them to believe in me and take me in so I can go out there and show myself.”

What was it like waiting for the contract situation, which took two months, to be resolved?

“It can be frustrating at times, you’ve just got to have a lot of patience and, at the end of the day, I’m working as hard as I can on the field. The opportunities will show themselves as long as I’m performing.

“That’s really what I try to focus on. I try and keep my head away and my frustration from all the waiting. I’m not sitting around doing nothing while this is happening. I’m in the gym and working on the field, so that’s what I’ve been focusing on.”

What has changed for you since your debut?

“I was working as hard as I could in training. I was getting some minutes here and there. A couple of sub appearances.

“The second they put me on the field as a starter on the wing, I knew this was my opportunity and I wasn’t going to give it up.

“Once I got the first goal, from there it just continued. When you’re in the XI, you don’t want to lose that spot. I knew I had my foot in the door and I wasn’t going to let my chance slip away.”

Attardo holds an Italian passport, and EU Citizenship is a big advantage.

“It’s important because they wouldn’t have to worry about visa issues when I get out there. You look at players that possibly could have come to Valour this first season but couldn’t make it due to visa problems.

“It’s one less problem to worry about. I can show them I have my passport and can go out there and live. I also like that they look into my Italian background as well.”

Being one of the best Canadians in your age group, is selection for the Canada U20 team a priority?

“I can’t expect anything and sit here and say ‘they’re gonna call me’ cause it doesn’t work like that. You can have that mindset and slack off, not be prepared or ready and lose a bit of that game and maybe you won’t get called.

“I’m working as hard as I can and hoping I get the recognition. If I do I’m not gonna let the opportunity slip.”

How well do you think you will adapt to European football and what type of club are you looking to join?

“It’s gonna be great talent out there. Maybe the weather is a little different. Me getting used to the environment will be difficult but with the preparations I’m doing here I’m confident. I’m gonna go in there and give it everything I’ve got.

“[I’m looking for] any opportunity that is a step higher. That’s best suited for me and would be best for my development for me is the best decision..

Do you think regular playing time in a top league could lead to a call up to the senior men’s national team?

The player’s father, Rino Attardo, closed by saying how important the support of his siblings has been in his life as a soccer player.

“Sometimes we leave the brother and sister behind but without them pushing him, making it hard for him and contradicting him and everything he does, pushes him to the next level.

“Usually the youngest player in the family is the best player because of our older siblings. It’s been a very positive [influence] for Tyler.

“His older siblings played soccer, I coached his brother, my wife coached our daughter. They used him as a guinea pig and it wasn’t long before he was skating in circles around them,” he laughs.