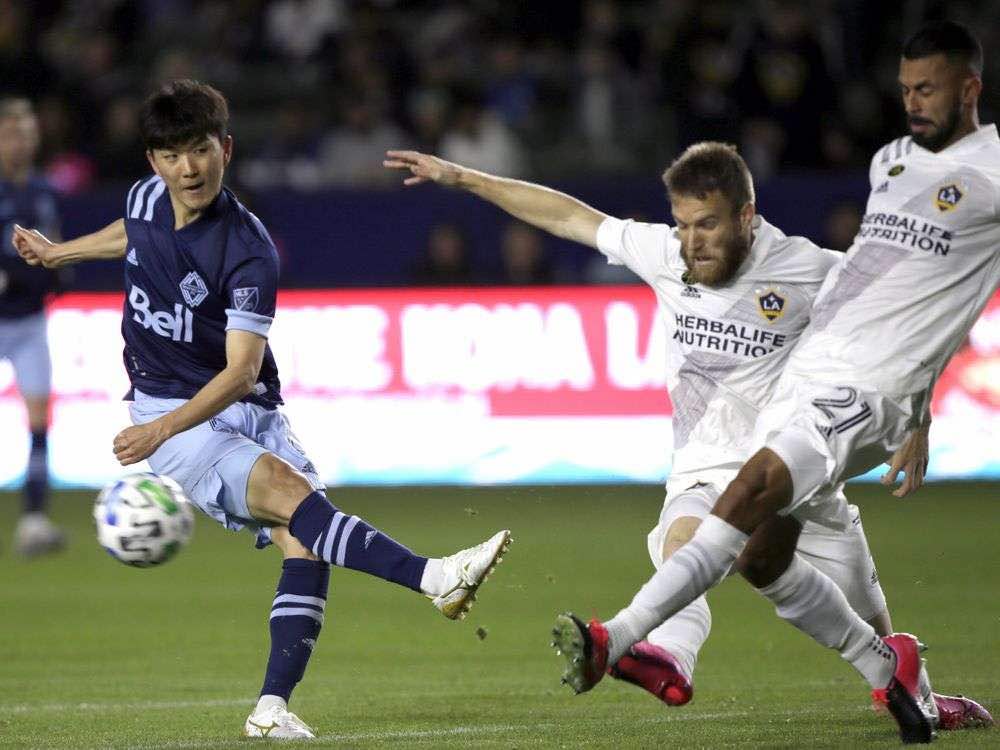 The Vancouver Whitecaps claimed their first win of the 2020 MLS season with a 1-0 victory over the LA Galaxy, spoiling Chicharito’s home debut at Dignity Health Sports Park.

The first half of the match saw both teams show some spark, but the deadlock would be broken in the 74th minute when Ali Adnan set up Canada international Tosaint Ricketts for his second career goal against the Galaxy.

A minute later, Galaxy midfielder Joe Corona was given a second yellow card for a studs-up challenge on Whitecaps midfielder Russell Teibert.

Besides the eventful second half, there were plenty of key talking points throughout the match which proved evident to Vancouver’s win and LA’s downfall.

These were the starting line-ups for each side.

For large portions of the match, Vancouver’s midfield looked fairly solid with several combinations helping move the play forward, something that was missing last week at BC Place.

In the graph below, it shows the Whitecaps edged the Galaxy in passing where it matters most. 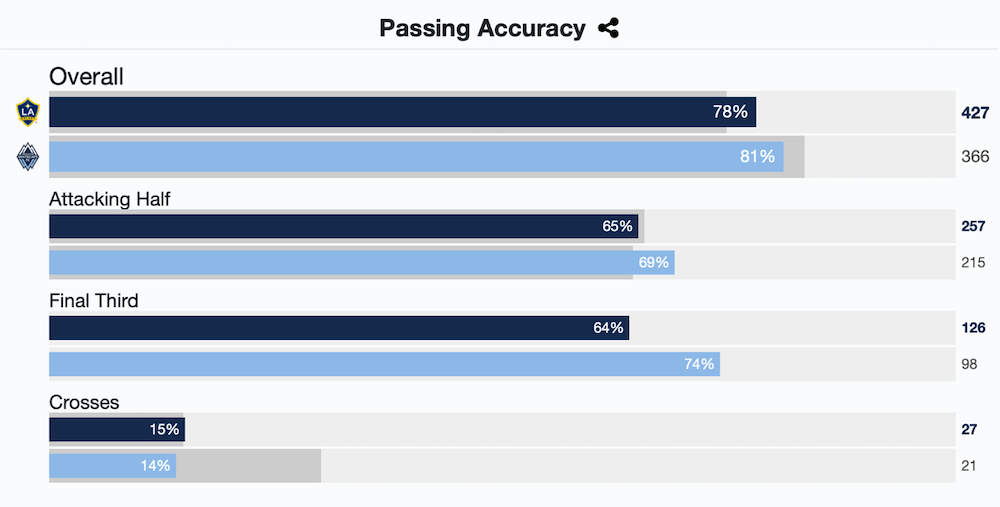 Last week, the Whitecaps midfield looked disjointed with the wingers and the strikers, oftentimes not combining enough with each other or not offering support in key areas of the field.

Against the Galaxy, Hwang In-beom and Teibert were able to move the ball around in more threatening positions, while getting the wingers much more involved and pushing forward when the chance presented itself.

This led to Ricketts, Cavallini, Cristian Dajome and David Milinkovic getting the ball in good pockets to combine with each other around the final third and allowed their fullbacks to get involved in the attack.

In addition, the midfield play provided the ‘Caps with the go-ahead goal, as rookie Ryan Raposo played a nice one-two with Adnan prior to Ricketts’ goal.

Much of LA’s lack of creative play in midfield was down to the fact Dos Santos left the game at halftime due to injury and was replaced by MLS veteran Kitchen.

Dos Santos, who just recently recovered from a calf injury, was treated several times on the sideline during the first half.

Speaking of fullbacks, Janio Bikel, who was making his MLS debut, put in an incredible display filling in for the injured Jake Nerwinski.

The former CSKA Sofia man had seven tackles (four won), four clearances and 20 successful passes in the opposition half, three more than the total he had in his own half. 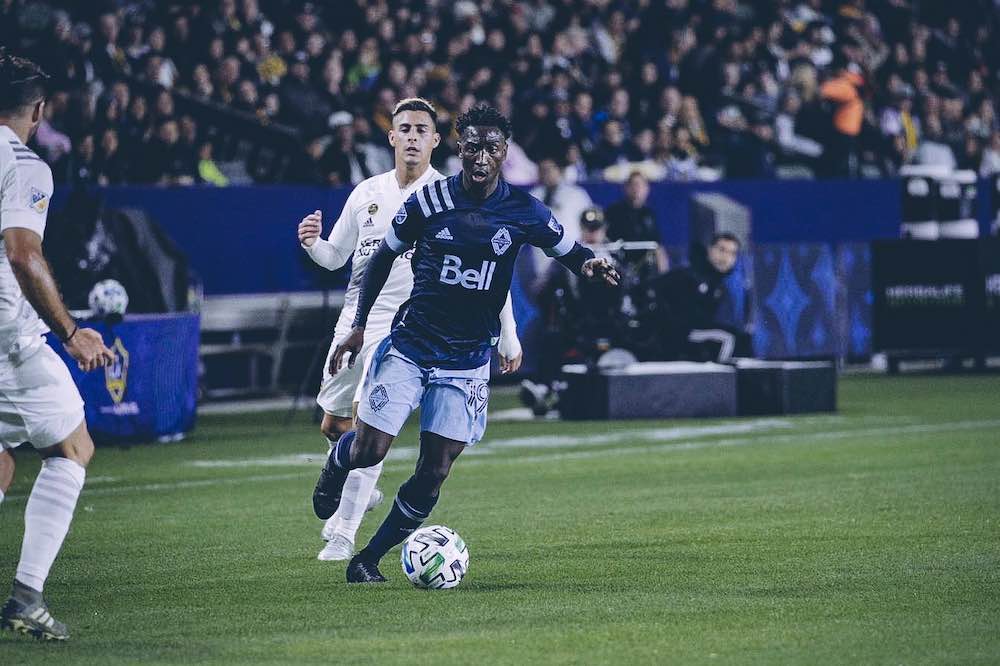 Janio Bikel made his Whitecaps debut against the Galaxy. (Source: @WhitecapsFC / Twitter)

While providing Cristian Dajome with some decent support out wide, Bikel had the tough test of marking World Cup winger Cristian Pavon, who has been tipped by many as a frontrunner for MLS MVP this season.

Pavon, who scored a stunning curler in the Galaxy’s 1-1 road draw against the Houston Dynamo, was limited to just one shot on goal, three successful take-ons and a lone successful cross.

Although Pavon looked lively at times, trying to get the Galaxy attack going, Bikel helped make the Argentinean’s day difficult and proved an essential part of the Whitecaps’ win, especially when you consider right-back isn’t his natural position.

Marc Dos Santos stressed during pre-season how important the high press would be for Vancouver this season.

In fact, three of the Whitecaps’ pre-season goals came from pressing the opposition high up the field, but the tactic was rather invisible during last week’s home opener.

However, the result was much different on Saturday.

The front six disrupted LA’s rhythm and forced them into multiple turnovers in key areas of the pitch as the game progressed, with some leading to dangerous counter-attacks. 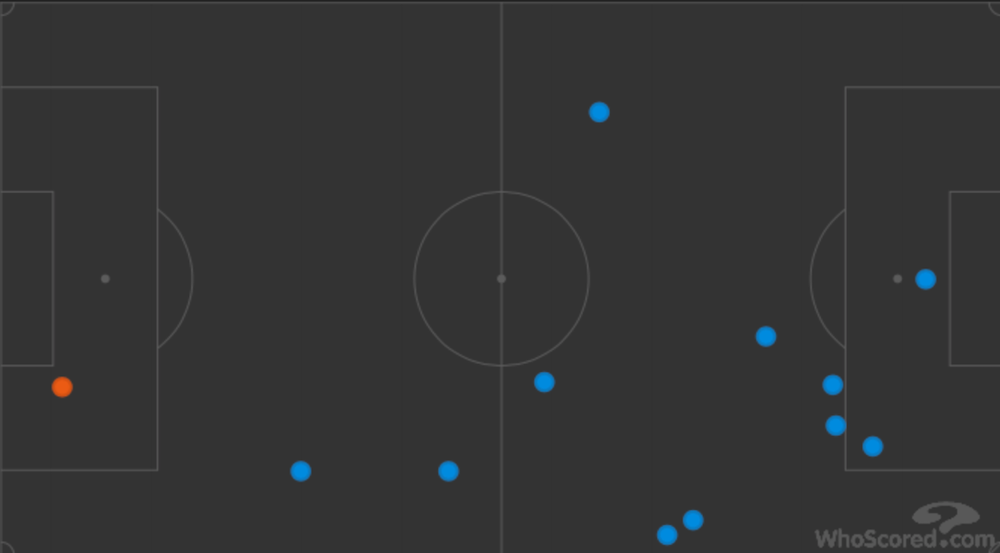 As you can see in the graph above, Vancouver completely dominated the interceptions chart, which shows how successful the high press was.

Hopefully, it’s a sign of things to come from the Canadian side.

Much of the hype around this game was Javier “Chicharito” Hernandez’s home debut at Dignity Health Sports Park, with plenty of Galaxy fans turning up to see their newest star in action.

As he did last week in Houston, the former Manchester United and Real Madrid striker wasn’t able to open his MLS account and failed to get involved with the attack for large periods of the game. 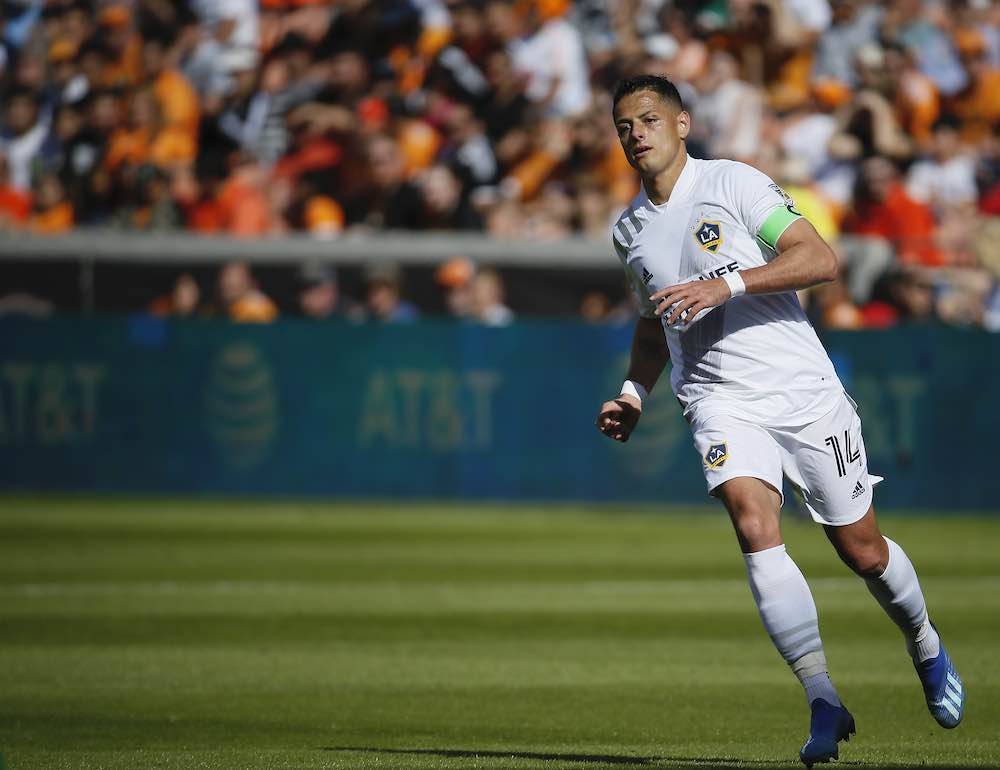 Chicharito had the lowest amount of passes (22) by an LA starter and just one blocked shot. He was often frustrated with his teammates for not providing him with good service or not sending him through on goal.

The wait continues for his first MLS goal.

SuperDraft pick and Generation Adidas signing Ryan Raposo made his first professional appearance for Vancouver, coming on in the 67th minute to replace Dajome.

Raposo showed promising signs in his debut, tying for the most dribbles of any Whitecaps player with four, while also contributing to the defensive side of the game with one interception.

The youngster, who scored twice in pre-season, was heavily involved in the lone goal of the match, as he combined well with Adnan to send him in behind the LA backline to set up Ricketts for the finish.

Not only did he help play a critical part in the goal, but Raposo also helped create the play that drew the penalty in the 89th minute, as he sent Ricketts through on a goal before Giancarlo Gonzalez brought him down.

The 21-year-old was recently named to Canada’s provisional list for Olympic Qualifying, so it’ll be interesting to follow his progression as the season continues.

Up next for the Galaxy is a trip they’ve never made before, as they’ll play part in Inter Miami’s first-ever home opener, while the Whitecaps return to BC Place to host an undefeated Colorado Rapids side.