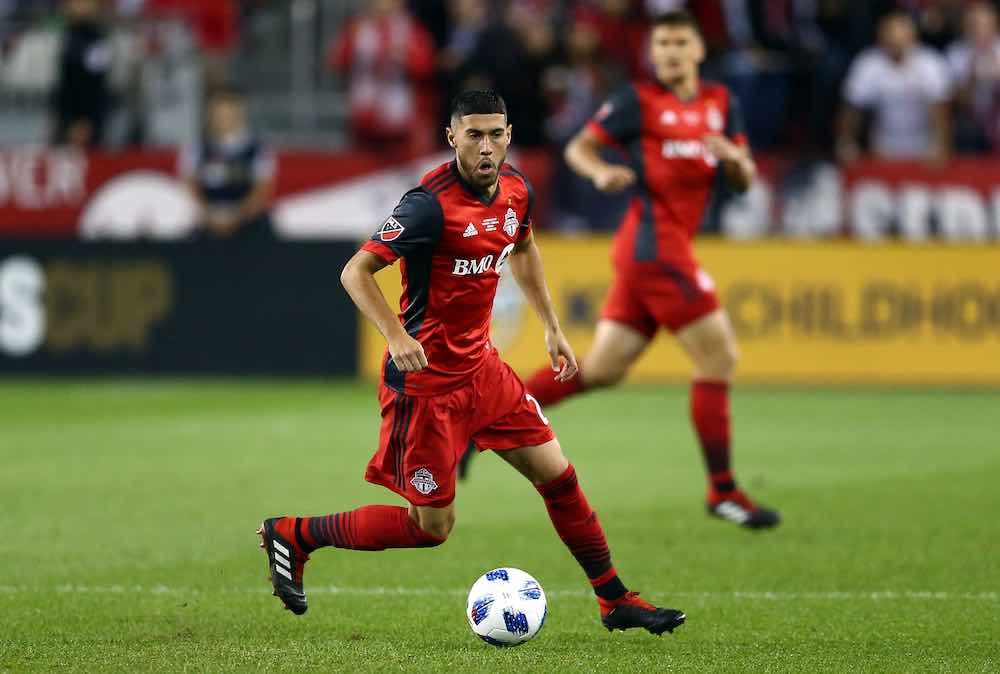 By Jerry Mancini in Toronto.

The performance of debutant Ifunanyachi Achara caught the eye as Toronto defeated New York City in their home game of the season — more on him later — but there were also other promising signs throughout the team which might have gone under the radar.

Not least in midfield where Canadian Jonathan Osorio and American Marco Delgado complemented each other well and provided a base for the team to build from.

Delgado made six interceptions and was the second most involved player in the game after Brazilian right-back Auro.

But it was Osorio who really took control of the game, and he is the first standout moment.

Osorio Shows He Can Lead From Midfield

With Michael Bradley sidelined for up to four months and Jozy Altidore wearing the armband in his absence, Osorio has done a good job as the positional replacement for Bradley in Toronto’s opening games.

Osorio showed patience, made timely passes, and didn’t make any rash decisions as he protected the ball very well. He touched the ball 66 times and finished the game with a pass success of 91%, the best in the team.

The 27-year-old, who has made more appearances for the club than any other player, showed a willingness to help the defence and made timely challenges, finishing the game with two tackles and two interceptions to go with his impressive passing. Osorio has so far risen to the occasion in Bradley’s absence. 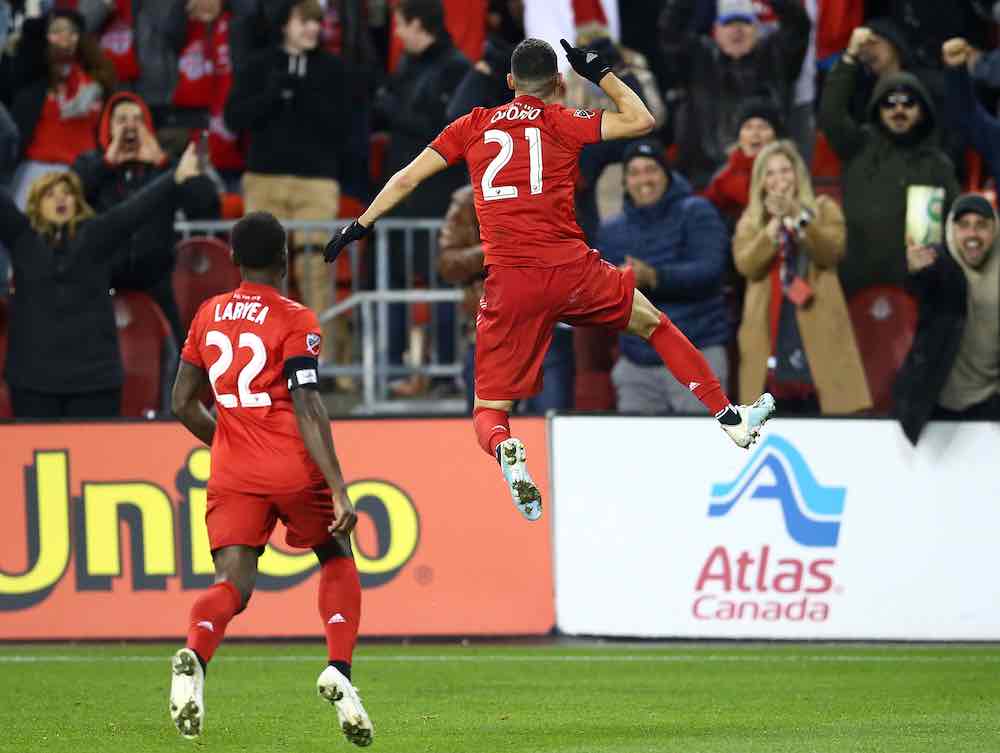 Another Strong Performance From Richie Laryea

Laryea continued where he left off against San Jose Earthquakes, putting in another strong performance.

The 25-year-old replaced Erickson Gallardo in the 60th minute and continued to show that Greg Vanney can depend on him in meaningful matches this season. He is earning the respect of his manager.

He took up a position on the right wing, but made three tackles in the half an hour he was on the pitch, defending from the front.

“I’m just trying to help the team however I can,” Laryea said after the game.

“If I’m starting, I want to see how long I can play and see what I could do in the time I’ve been given, and if I’m off the bench in 60th, 70th or 80th minute I’ll do whatever I can in the minutes I have.

“I’m comfortable coming off the bench but I’d also like to play.”

The Canadian’s delivery from out wide was well executed, setting up his team-mates, including Jozy Altidore who came close to scoring on one occasion.

With less than ten minutes remaining in the match, Layrea helped set up their winning goal, with Achara eventually applying the finish.

Given the good awareness he showed in the game, along with his great speed and ability to create chances for his team, Vanney must be considering giving him a spot in the starting lineup for the upcoming match against Nashville. 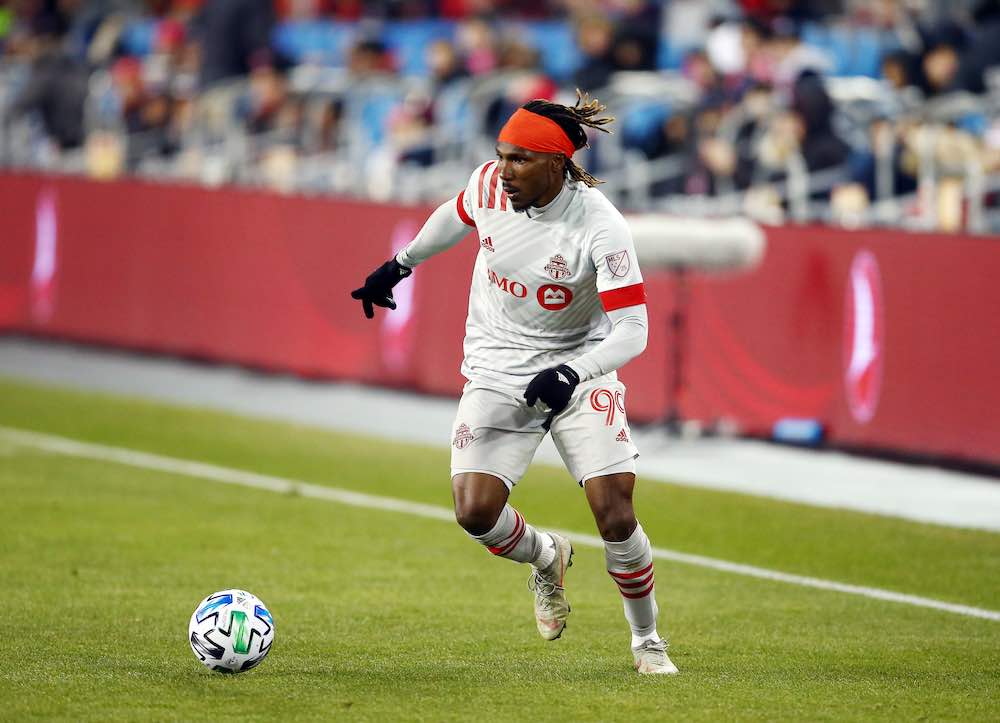 Achara came into the side in the place of Tsubasa Endoh after the midfielder picked up an injury in training on Friday. It was a late call, but he was ready.

Since he arrived at the club, he’s shown that he can play at a high level. In preseason he scored three goals in four games and has continued where he left off.

He made it difficult for NYCFC to defend throughout their match, using his speed to his advantage. The Nigerian also showed he is a smart player, able to read the play and make clever movements off the ball.

He also showed that he’s able to help out the defence when required.

Achara thought he had scored in the 11th minute from a pass from Osorio, but the goal was ruled offside. With under ten minutes remaining, he finally got his goal — the matchwinner — heading home Laryea’s deflected shot.

“I was happy and excited to get out there,” Achara said. “When I was told I was going to go out there, I was going to do my thing. Try to score and be in position. Two goals would have been much better, but I’ll take one!”

The 25th overall pick in the MLS SuperDraft couldn’t have scripted a better start in MLS and will have fans very excited.

“[The experience] was amazing,” he added. “I never played in front of a crowd that big before and the noise… The atmosphere and crowd are really energetic and gives you so much confidence.”