Manchester United defeated Manchester City in Sunday’s Manchester derby at Old Trafford, and although City had the majority of possession, they didn’t actually seem that threatening to United for the most part.

Goals from Anthony Martial and Scott McTominay gave the red half of Manchester a memorable 2-0 win, but how did they do it?

Solskjaer opted for the same 3-4-1-2 formation that helped United win 1-0 against City in the second leg of the Carabao Cup. The only changes from that game were Bruno Fernandes replacing Jesse Lingard in the number 10 position and Daniel James playing instead of Mason Greenwood.

James and Martial started the game as wide-forwards. James was a great outlet throughout, while Martial showed more natural No. 9 instincts, still playing his normal game.

The shape of the back three/five has caused United trouble in the past, as the wing-backs have sometimes operated too deep. In the picture below Aaron Wan Bissaka is far too narrow and deep. This allows Robertson to control the ball and play forward. 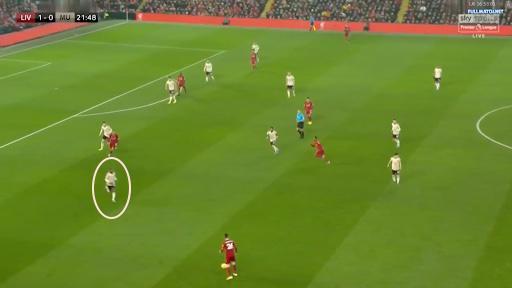 Positionally, Wan Bissaka was much better in the derby — not allowing Sterling to pass forward or run at him often, and when he did Wan Bissaka won the duels.

His positioning in the picture below when Sterling receives the ball is much better than against Robertson earlier in the season, and he makes the winger pass backwards. 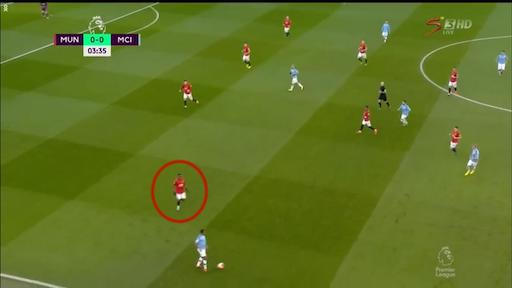 Solskjaer has utilised Luke Shaw at left centre back in a back three several times now, and he looks great there. It also allows United to create an overload on the left side.

The build-up to the free-kick for the first goal was due to a left side overload. Looking at the picture below, although City have their men back, the four United players in a small space make it harder to predict the pass Shaw will play, it leads to a controversial free-kick, from which Martial scores. 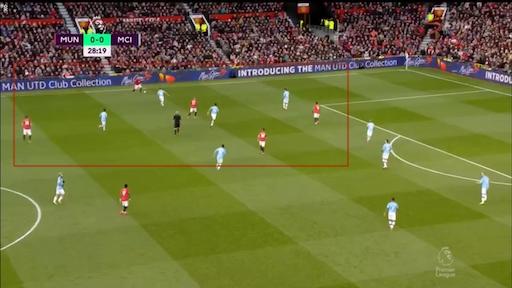 Nemanja Matic, Fred and Fernandes all had brilliant games. The trio made nine interceptions in the game between them — more than the whole City team together, although this was partly because the Sky Blues had more possession.

Fernandes has played as a roaming creator in previous games but had to be more defensively focused here. He was screening Rodri in the middle of the park to interrupt their build-up play.

It would often help lead City play wide, which was better for United due to Wan-Bissaka’s dominance against Sterling, and Shaw and Brandon Williams being able to deal with Phil Foden. This is until City brought Riyad Mahrez on who had plenty of joy on the right side against Williams.

The Algerian created two chances in the time he was on, with one being a ‘big chance’. This is why Solskjaer moved Shaw wider and brought Eric Bailly in, a good move by the United manager.

The three in midfield worked tirelessly, especially in the last 25 minutes when City were piling on the pressure. The whole side covered 113km, 3km more than Manchester City. Fred covered the most on the pitch with 12.18km.

Ultimately, although United played well throughout, all teams still need to capitalise on any good play. In the other wins against City this season Marcus Rashford produced the goods. On Sunday Fernandes and Martial both stepped up, with both putting in impressive performances.

Martial showed a different, more direct side to his game. He won duels against defenders and helped defensively in the air. He deserved an assist after winning a duel against Fernandinho and playing James through on goal, but it was given as a foul by Mike Dean. Overall, Martial had a great performance topped off with a well-taken goal.

Fernandes has been incredible since coming in, and he was great against City. His well-thought free-kick is something that no other player at Manchester United bar Pogba would attempt, and let alone execute.

The Portuguese often finds great positions on the edge of the area. He could’ve had two open attempts at goal if James and Martial had found him when attacking the City area.

Scot McTominay’s goal in the final minutes of the game produced an incredible moment for United fans.

The atmosphere in Old Trafford was amazing and the pressure on Solskjaer only a couple months ago is fading away with each passing performance.

The win keeps United in with a chance at finishing in the top four. It was more evidence Solskjaer is clearly a great big-game manager and is learning tactically at the top level.

It’s looking good for the Reds at the moment, but they need to keep this momentum going until the end of the season.