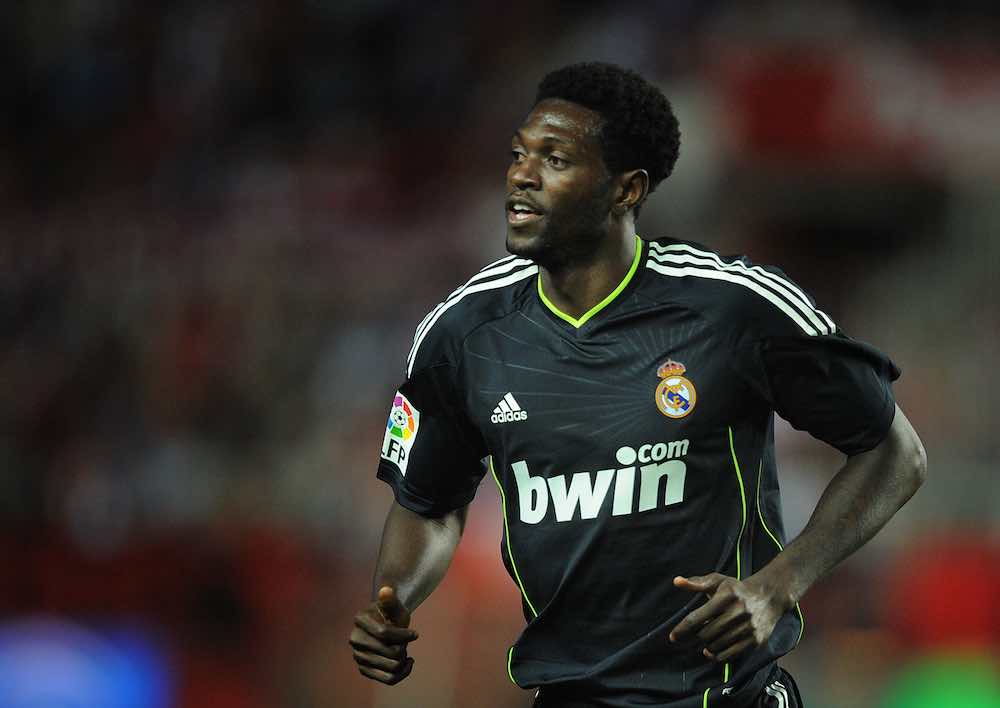 On Wednesday evening Togolese striker Emmanuel Adebayor will be making his Copa Libertadores debut when his Olimpia side travel to Ecuador to take on 2019 Ecuadorian Champions, Delfin.

Adebayor has a vast experience of playing in continental battles in both the Europa and Champions League. He took to the field for six different clubs in European competition: Monaco, Arsenal, Manchester City, Real Madrid, Tottenham Hotspur, İstanbul Başakşehir.

In the 2003/04 season at the age of just 20, Adebayor started his European journey whilst playing for Monaco, making his debut off the bench, replacing Ludovic Giuly in a 2-1 away victory over Dutch side PSV.

In the same season, Adebayor played nine matches without finding the net, but that season was Monaco’s greatest ever Champions League campaign to date as they reached the final, losing to Porto. Adebayor was an unused substitute during the final.

Just over a year later, the Togo international scored his first goal in the Champions League, as he and Monaco blew away Deportivo La Coruña.

Some unselfish play by Uruguayan team-mate Javier Chevantón, saw him square the ball to Adebayor who finished a simple tap in.

In the same season, Monaco failed to live up to the heights of the previous year, only reaching the last sixteen losing out to PSV.

In 2005, Adebayor made his first appearance in the Uefa Cup after Monaco missed out on a place in the Champions League group after losing to Real Betis. Adebayor played five times in the tournament, scoring three goals, which sparked a high profile move to the Premier League.

Switch To The Gunners

Adebayor signed for the Arsenal in January 2006 for a fee of around £3m. Because he had already played in the Uefa Cup for Monaco, he was cup-tied as Arsenal reached the final of the Champions League, meaning he had to wait six months to make a first appearance in the competition for his new club.

That eventually came in a qualifying match against Dinamo Zagreb and Arsenal were  3-0 winners on that night.

Adebayor had a quiet evening, something which continued throughout the season in Europe where he played eight times but failed to hit the net.

Arsenal were stunned by PSV in the round of 16, who enjoyed a 2-1 aggregate victory over the London club.

He had to wait until the knockout stages of the 2007/2008 season to net his first Champions League goal for the Gunners, scoring a late goal at San Siro as Arsenal saw off AC Milan.

In the quarter-finals, Arsenal were drawn against fellow English club Liverpool, and it was Adebayor who opened the scoring with a bullet header. Dirk Kuyt levelled the match, which ended 1-1.

The second leg at Anfield was a classic match under the lights as expected. With the score 2-1 on the night (3-2 on aggregate) a magnificent run by Theo Walcott, starting from in his own half and beating four Liverpool men, resulted in him squaring the ball to Adebayor. The striker showed great composure to slot the ball past Pepe Reina, putting Arsenal in the lead on away goals.

Almost instantly, Liverpool retook the lead eventually and the game finished 4-2 on the night (5-3 on aggregate) sending Adebayor and Arsenal out.

2008/2009 season would prove to be Adebayor’s last at Arsenal, but it turned out to be his best in European competition when it came to goalscoring. 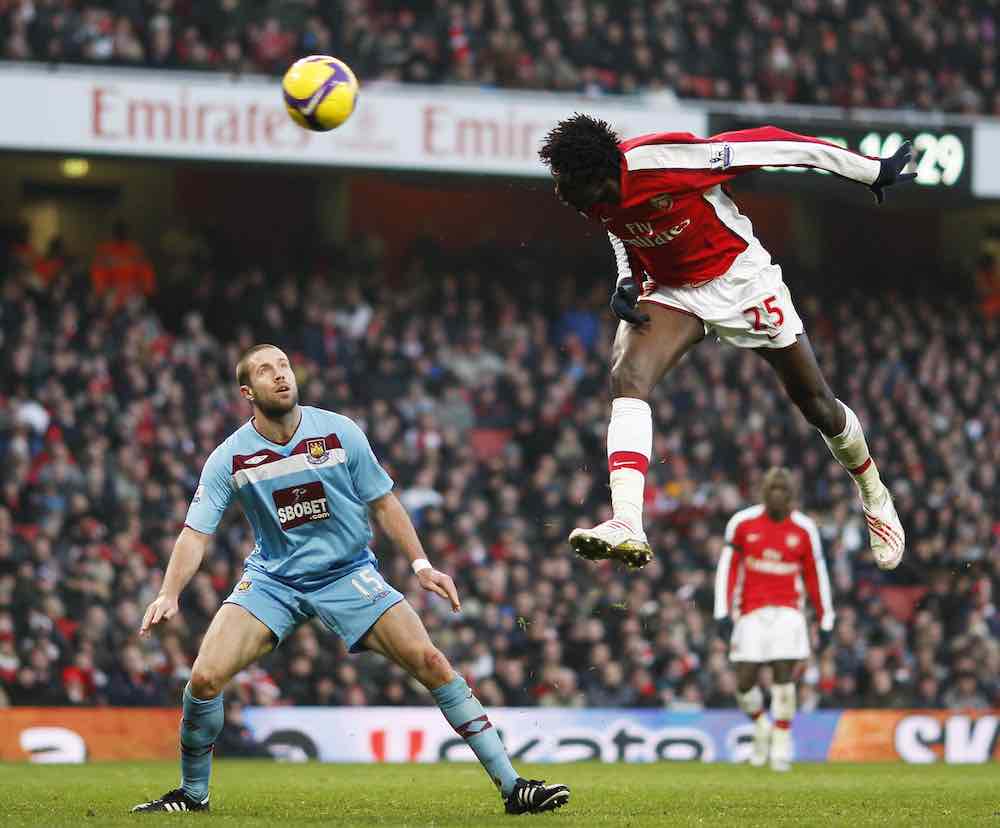 Starting in the qualifiers, Adebayor finished off a move from started by Walcott once again,  to help send the Guners into the group stage of the Champions League, enjoying a 6-0 aggregate victory over Steve McClaren’s FC Twente.

In the group stage, the Togo international scored his first brace in continental football, as well as providing an assist for Robin Van Persie at home to Porto, helping Arsenal defeat the Portuguese club 4-0.

In the next match, in hostile conditions away to Fenerbahçe, Adebayor opened the scoring in an impressive 5-2 win.

Arsenal saw off Roma in the round of 16 and in the two quarter-final ties against Villarreal, Adebayor was on the scoresheet in both games as they went on to win 4-1. His goal at the Emirates turned out to be his last in the competition for the club.

Arsenal’s run came to an end in the semi-final after losing to another English club, Manchester United.

In a move which angered Arsenal fans, Adebayor joined Manchester City for £25m. At the time, City were new to European football and competing in the Europa League.

On October 21, 2010, Adebayor earned his first and only Europa League match ball, scoring a hat trick against Polish side Lech Poznan which helped him to four goals in six games for the Manchester club before moving on.

A Shock Move To Madrid

Astonishingly, Adebayor was loaned to Real Madrid, where he played a role in helping them get to the semi-finals.

Against Tottenham, in the quarter-final, he scored two perfect headers in the Bernabeu as Real Madrid thumped Harry Redknapp’s men 4-0, with the tie eventually finishing 5-0, ending Spurs European run.

In the next round, Los Blancos were eliminated by rivals Barcelona who went on to win the competition.

After the victory over Spurs, Adebayor’s European nights never reached the same heights. Coincidently, he moved to Tottenham where he played in the Europa League 12 times, scoring eight including a goal at San Siro against Inter Milian as well as a brace in Ukraine when they took on Dnipro Dnipropetrovsk.

When Adebayor’s time at Spurs came to an end, he moved to Turkish club İstanbul Başakşehir where he was involved in the club’s first-ever Champions League fixture — a third-round qualifier against Club Brugge.

This first leg saw an exciting 3-3 draw away from home putting the Turkish club in a nice position for the home leg in which Adebayor opened the scoring with a trademark header. It was the clubs first home goal in the competition and helped them win the game 2-0.

İstanbul Başakşehir failed to make the group stage after losing out a close tie to Spanish side Sevilla, and following this result, Adebayor play only two more games in Europe.

Copa Libertadores On The Horizon

Now his attention turns to a different tournament: the Copa Libertadores. The signing of Adebayor has raised expectations of the Olimpia fans that he and Roque Santa Cruz can help end their 18-year wait for silverware in the competition.