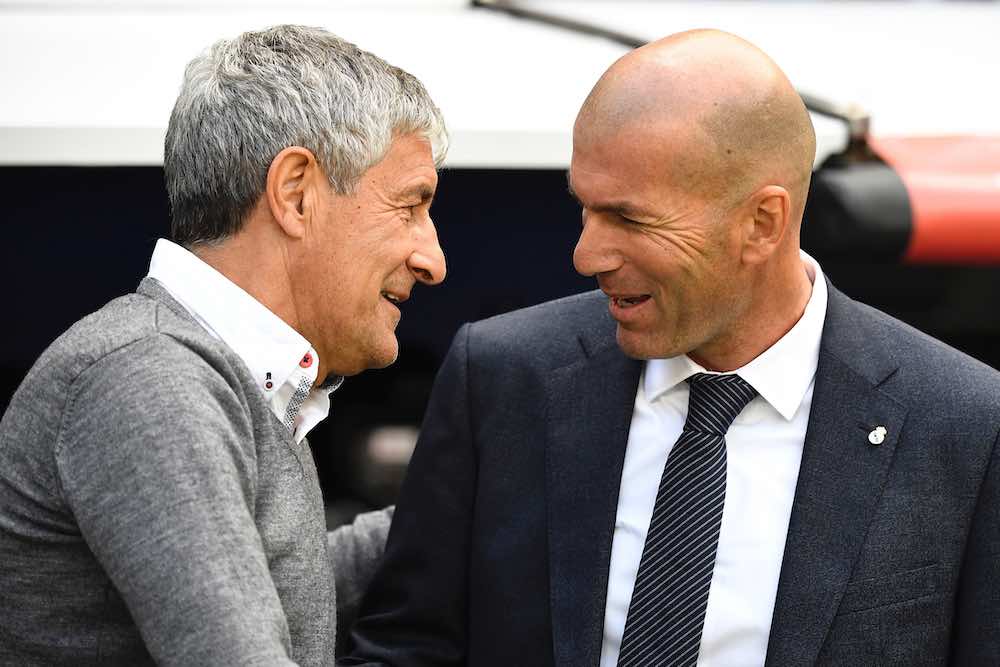 In one of the most eagerly anticipated Clasicos in years, the fixture has been given even more weight by the slim two-point margin at the top of La Liga with the Catalans holding the advantage over Los Blancos.

In arguably the biggest game on the European football calendar, this Clasico will likely be an indicator to who’s going to go on and win the La Liga title, and there are some big talking points going into it.

Since Luis Suarez and Ousmane Dembele’s long-term injuries keep them sidelined for some time, the front three for Barcelona has seen quite the reshuffle, with no obvious combination holding down all three positions.

What is clear is that Antoine Griezmann will lead the line and Messi will be starting, either up top with the Frenchman or out to the right in a 4-4-3 formation.

But what about that left-wing spot?

There are three likely candidates; Arturo Vidal, Ansu Fati and new-boy Martin Braithwaite. Of course, Setien could go with a 4-4-2 as he did in the demolition job at home to Eibar in which he played Vidal on the left of the four.

Vidal brings workmanship and tenacity, something that would certainly suit a 4-4-2 system in which there is more emphasis on tracking back and playing to his strengths. But employ a 4-4-3, and there’s a real debate to be had over Ansu Fati’s involvement.

Having not played in either the Eibar game or the 1-1 draw at the San Paolo against Napoli in midweek, Setien may have been saving the young prodigy for the Clasico.

His enigmatic talent and lightning-quick feet could be the difference in this game and scoring at the Santiago Bernabeu could write Fati into El Clasico folklore.

But what about the controversial Martin Braithwaite? The Dane could well see a start on that left-hand side if, for whatever reason, Fati isn’t fit. He grabbed a couple of assists in his debut off the bench at the weekend and a shock start could well be on the cards if Setien wants to bring more of a physical attacking threat to his frontline.

While Barcelona’s result was disappointing against a very temperamental Napoli side in the Champions League on Tuesday, it was their rivals who had the biggest midweek meltdown.

Real Madrid, losing 1-2 at home to Man City, have a real point to prove going into this Clasico. They lost top spot to the Catalans at the weekend by way of a 1-0 defeat to Levante, and this misery was further compounded by their Champions League shortcomings. Zidane’s side have it all to do.

They looked completely out of sorts against City, lacking ideas in the final third and wasteful in possession. If they play anything resembling that Champions League performance, then Barcelona will have little trouble carving them open and scoring a hatful.

But this is their chance to bounce back.

Hosting Barcelona is their chance to make a huge statement. Despite having a torrid time of it this week, a win could completely change their fortunes and set them back on the winning path.

They’ll rely heavily on Benzema to provide much of their attacking threat. With his last goal coming in the Madrid derby at the start of the month, he’ll be hungry to provide the difference in another season-defining game.

As former general manager of Real Madrid Jorge Valdano so tantalisingly put it, this Clasico could see some of the lowest quality of football we’ve seen from a derby that’s thrown up so many iconic moments of the years.

Expect it to be a cagey affair given what’s at stake for both teams. With a 0-0 draw at the Camp Nou back in December, much of the same could well pan out this time around. Real Madrid are under so much pressure to keep pace with Barcelona for the title that they may well ‘shut up shop’ and try to contain the flair and trickery of Messi and co.

Alternatively, with such a point to prove going into this blockbuster fixture, Madrid could well show some determined sense of revenge and come out of the blocks fastest. While Barcelona are fully expected to dominate possession and puzzle an opening into the Real Madrid defensive line, it could be something that leaves them susceptible to the counter-attack.

From this, the pace going forwards of Vinicius Junior could be absolutely key to Real Madrid’s success in this game. After a woeful miss in the aforementioned loss against City, the young Brazilian will be looking to make amends and get back on side with the Madridistas as soon as possible.

Overall, this game has the makings of a true classic. With these two Spanish heavyweights battling it out for the La Liga crown, expect fireworks from the first whistle to the last and no punches pulled from either team.

This is more than just another Clasico. This is the league title on the line.