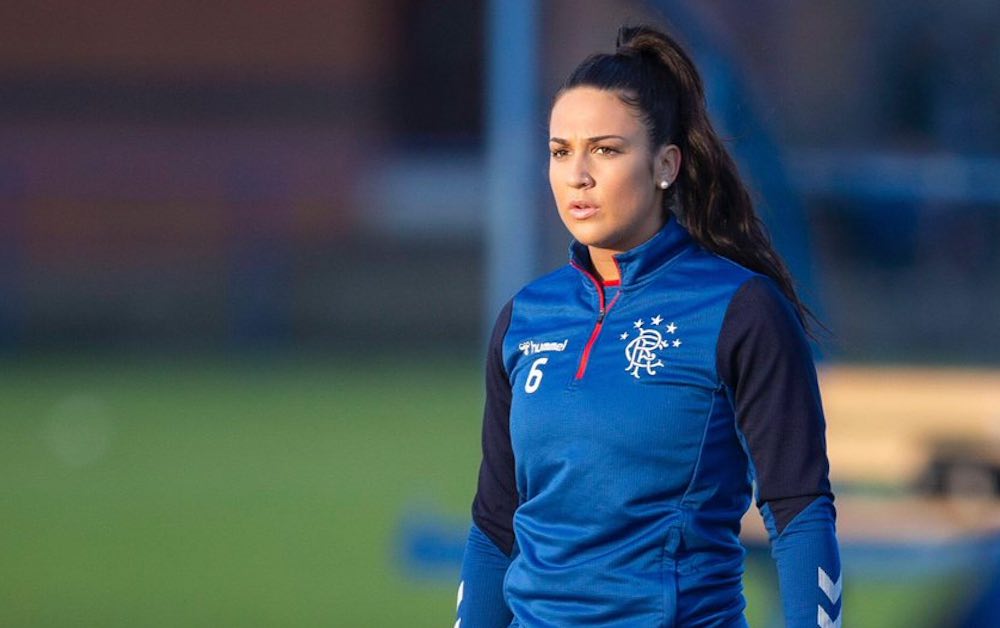 Venezuela international footballer Sonia O’Neil grew up in Canada where she fell in love with football from an early age.

O’Neil, who wears the name ‘Sonia’ on her shirt in true South American style, went on to study in the United States, where she juggled playing football along with her studies.

She played college football for four years playing for two different teams, Niagara Purple Eagles and North Florida Ospreys. In terms of university sport, the U.S. has always been known to be the most competitive in the world.

“I started playing football when I was three years old,” she told WFi. “My parents said that I was always with the ball. It’s almost that I chose football, not so much that someone or something inspired me, I just loved it from the day I started to walk pretty much.

“Football at university in the U.S. is like another world. I can’t explain it but the experience was incredible. It was also very difficult because I barely had time for myself with the classes and football.

“I feel as though I spent just as many hours as I do now, but on top of that having classes which made it very hard, but it taught me discipline and time-management, preparing me for the professional world.

“I feel as though I have been playing professionally since I was 17 because I would put college football on the same level as professional football for women in terms of the time, discipline, workload and intensity you go through. It prepared me to become a professional athlete.”

Shortly after graduating from university, O’Neil wasted no time in signing for her first professional club, joining Husqvarna in Sweden; a considerable distance from her home in Toronto and a completely different way of life to Canada and the U.S.

“Just a few days after graduating I went straight to Husqvarna in Sweden. I had five days in Toronto before moving.

“Playing far from home is something I have been doing it since I was 17. Growing up in Toronto I was exposed to several different cultures from a young age. Many of my friends’ parents are immigrants, like my Mother. I have always had to learn to adapt without even knowing.

“I have a Filipino friend and when I go to his house there’s a different way to greet his parents. You can eat with your hands and it’s not seen as being disrespectful.

“The exposure I had to different cultures from a young age made it easier when I went to Sweden. Adapting to the Swedish way of life was quite easy for me, especially because they could speak English well, too.

“The hardest change was going from university, where I had no time to myself and was constantly on the go, to then having so much free time, being alone in a new country, and learning how to use that free time productively.

“I was lucky because a couple of players on the men’s team were from Toronto and I got close with them. One of them introduced me to his wife and his child, we still keep in touch to this day, I feel all these factors helped me settle in Sweden nicely.

After only a short time in Sweden, O’Neil travelled to Italy to join Roma, where she played a part in helping the club win the second division.

Happy Valentine’s Day…. Spent the day doing what I love ⚽️ Beyond blessed to start this new chapter with Roma💛❤️ pic.twitter.com/xZBE2L3CVf

“I only played two months in Husqvarna due to my visa. I ended up going home to try to get my Italian citizenship. With this route, I could avoid visa issues in the future and not take an International spot on teams.

“I then went to Roma once I got my Italian citizenship. I was there for around four months where we won Serie B  but lost in the play-off to qualify for Serie A. I wanted to move and play in the top division because I did well with Roma and they liked me as a person.

“They sent me on loan to Serie A team Bari. I played at Bari for a year. The level was high but I still wanted to challenge myself at a higher level.

“Of course, playing against teams like Juventus and AC Milian was great, but I did expect the level to be a little higher. However, there are a lot of great players in Italy.”

After a year in Italy, O’Neil was on the move again, this time to Croatia where she achieved something she set out to do by playing in one of the greatest tournaments in women’s football.

“I wanted to experience a new country in Europe, so I moved to ŽNK Split to play Champions League.

“When I went to Roma, I set out a list of goals, one of them was to compete and score a goal in the Champions League. I managed to do that with ŽNK Split. I was very proud to have achieved something I had set out to do a year earlier.

“I really enjoyed my time in Split, it was a great experience, it’s a beautiful city, I love it, I will be back to visit soon.”

In 2019 she was called up to be part of the Venezuela squad for a training camp. She told WFi the reasoning behind the choice regarding her international future.

“For Republic and Northern Ireland, it would be difficult to get the paperwork.

“Growing up I was a part of team Team Ontario, which Canada calls players from. Even as a part of Team Ontario, I told my dad I wasn’t enjoying it. I hated it. He would have to convince me to go to training. I just didn’t like the environment and I didn’t get the passionate family feeling there.

“If Canada came knocking at my door tomorrow, I wouldn’t play for them.

“I was open to the concept of Italy, which is why I was playing in the Italian league, but as time went on I didn’t have any feeling towards Italy.

“When Venezuela came around I felt more passionate. It was meant for me to play for Venezuela.

“In October Venezuela brought in Italian coaching staff. The coach found me to give me the call to go to the Venezuela training camp in Roma.

“I got a really good feeling from [head coach] Pamela Conti. I’m huge on that. When I went it was an incredible experience with the girls and it felt like a family right from the off. It’s not often I can say that, so to me, it was the best decision I made.

“The fans, coaches, staff, players, the country is incredible. With the change in the organization and staff, we can make history, and compete in the World Cup. I’m looking forward to that.

“I think I fit the style of play Pamela Conti and what she expects from me on and off the field, the training was fun but intense with two sessions per day.

“At the time football had just become a job to me, going to this camp the passion came back, motivating me even more.

“I was extremely blessed and happy just to be there with them, I’m hoping to complete paperwork to be at the next training camp with them.”

In January of this year, the 25-year-old added another club to her list. She joined one of Scotland’s biggest clubs, Rangers.

O’Neil and her teammates have started the season on a positive note, winning all of their matches.

She spoke about the decision to join Rangers and how she’s settled into life in Scotland with her new club.

“Before joining Rangers I was playing in France in the first division, which is known to be one of the top leagues for women’s soccer in the world.

“I was happy to be there I did enjoy it, but overall I wasn’t happy because of certain circumstances.

“An opportunity to join Rangers came up in November. I met up with the Rangers coaches and I got a really good feeling from them.

“I’m huge about following up that gut feeling you get when you meet people, I’m usually pretty good with that.

“They showed me the project, training facilities, the investment they were making to the women’s side and what they hope for the future. I really liked how this was presented, their ideas, and what they were expecting from us.

“I am a very competitive player I hate losing, Rangers are known for their success and I want to be a part of that success on the women’s side.

“The men have done great and are known for their triumphs. It’s time to carry that on to the women’s program, which is the clubs hopes.

“My first couple of weeks at Rangers have been amazing. I have played at several clubs, this is the first CLUB side which I feel I can call home.

“All the girls get along which is really rare for a big group of new girls competing for a starting spot, every one of these girls are always laughing, giving off positive vibes and wanting the best for one another.

“Training has been very fun, but also very serious if someone is having an off day we encourage each other to sharpen up.

“The coaches do a great job of organising the sessions, we have an idea what we are doing before training as everything is all planned out for us,

“It’s a great environment, something we need if we want to achieve our goals which are to compete in the Champions League.

“The staff are friendly, helpful and caring, you don’t just feel like another person on the team, they care about you as a person. The support from the Rangers community has been great.”

She joked about the only problem she seems to be having in Scotland, which includes understanding when her coach say’s “doesn’t”.

When you’re trying to understand the Scottish accent and the exercise at the same time 😅😂💙 #GettingThere pic.twitter.com/2QGQNzZZod

“The Scottish Accent has been difficult to understand, but I’m starting to get used to it!

“I think my coach says disnae? Isnae? Something like that. Whenever I hear that I just think of Disney, like the Disney channel, and I just get distracted.

“That happens with a lot of words. I’ve learned belter, aye, and several other words. I’m starting to catch on to the accent. I still get a little confused sometimes, but every day I’m better with it!”

Loading...
Newer Post
Why Gennaro Gattuso Will Remain With Napoli For Another Season
Older Post
Hull City’s Jordy de Wijs On Eredivisie vs Championship & Being Coached By His Dad