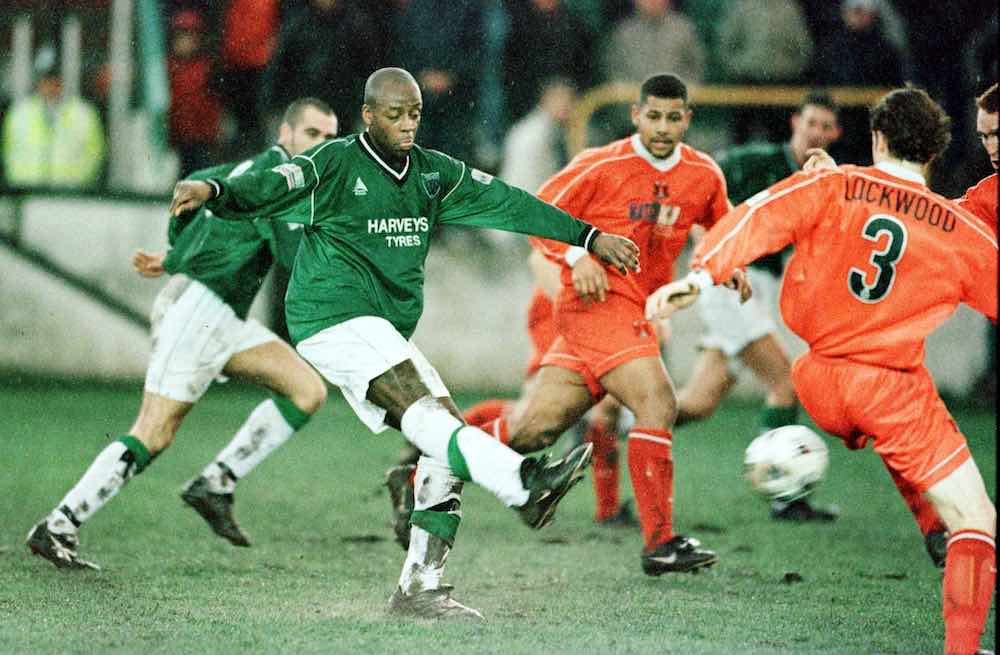 James Rowe spoke to former Manchester City, Doncaster Rovers, and Northwich Victoria forward Adie Mike for WFi. They discussed his playing days, life after football, influential coaches, and the best players he encountered during his career.

You retired in from professional football in 2004. How are you enjoying retirement and life after football?

“Life is ok at the moment! When I retired from professional football it was a gradual process so it was not as bad as others who I know of, who simply stopped playing football and that was it, they did not know what to do outside of football.

“I had a plan working towards retiring from professional football, mainly through injury and drifting down the leagues, and I thought that I needed to concentrate on the rest of my life so I was prepared for life after football.

“At the time I did not miss it as much as I thought I would, but now I have got back into football by watching it and going to matches, so for me personally it was not a big thing where I had to go and find a job. I also prepared myself mentally for when I stopped playing professional football.”

You came through the youth setup at Manchester City and went on to make first-team appearances for the club. How do you look back on your time there, and do you have any special memories and highlights?

“I look back now on my time at Manchester City with very fond memories. As a kid growing up I was from around the Moss Side area of Manchester and it was a dream for me to play in the first team of Manchester City. Coming through the youth setup and being an apprentice there was a great experience.

“I still keep in touch with most of the youth team players I played alongside, and we created a close bond as players. I thoroughly enjoyed my apprenticeship, and making my debut was even better.

“I know it is a bit of a cliché, but it was literally a dream come true to make my debut at Maine Road in a 2-0 win against Notts County in 1992!”

You had a loan spell and subsequent season at Doncaster Rovers. How do you look back on your time at the club?

“When I initially went on loan from Stockport County to Doncaster Rovers, the manager at the time was Kerry Dixon and he was fantastic, but he was not there for long because of what was going on behind the scenes.

“It was an eye-opener coming from Manchester City and Stockport County, and Doncaster Rovers was a different experience, in terms of off the pitch.

“I really enjoyed my time at the club playing with the likes of Colin Cramb and Darren Moore. We had a good team but we struggled more off the pitch than anything with what happened with the owner. I actually played a lot of the time centre-half during my time at Doncaster Rovers, and I really enjoyed it.

“Danny Bergara was one of the managers that I played under at the time and, overall, my experience at Doncaster Rovers was very good, but the unfortunately the football club got relegated from the football league in 1997 which was the only downside for me during my time there.

“Playing wise though, I thoroughly enjoyed it, and I would say it was one of the happiest times of my playing career.”

When you look back on your playing career, could you say who are among the best players you have played alongside?

“Off the top of my head, I would say, at the time when I broke into the first team at Manchester City, there was Paul Lake who was a very good player, but I would have to go for Paul Walsh, he was brilliant.

“He had been at Liverpool and Tottenham, and as a forward myself I just looked at him and his touch and his movement was first class. So I would say that he is the one player that stands out for me in that respect.”

I can imagine in your position as a forward that you have come up against difficult opponents through the years. Are there opponents that you faced that stood out for you?

“Yes, I remember coming up against Des Walker when he played for Sheffield Wednesday and he was certainly one of the toughest opponents that I have ever played against.

“I remember playing in a pre-season a friendly for Manchester City in Italy against Brescia and Gheorghe Hagi, the Romanian player, was playing for Brescia and he just absolutely ran the show. He was definitely the best player that I have seen and played against back in the day. He always sticks in my mind.

Finally Adie, looking back on your playing career, could you say who were the coaches and managers that mean a lot to you and helped your in your development as a professional footballer?

“I would say that Kerry Dixon was a good coach from my time at Doncaster Rovers. I would also like to mention Keith Alexander from my time at Northwich Victoria. He was a very good man-manager and coach and I enjoyed playing under him and I rate him highly.

“My first manager when I came through at Manchester City was Peter Reid, although I was not his type of player and we did not get along as such, but that is the way that football is.

“When Brian Horton took over at Manchester City he was really good for me. He really helped me and the younger lads as well. He was also very personal and approachable and especially in working well with the young players coming through at Manchester City at the time. He got all the players involved and he made you feel welcomed. I really enjoyed the training too, which was rare.”