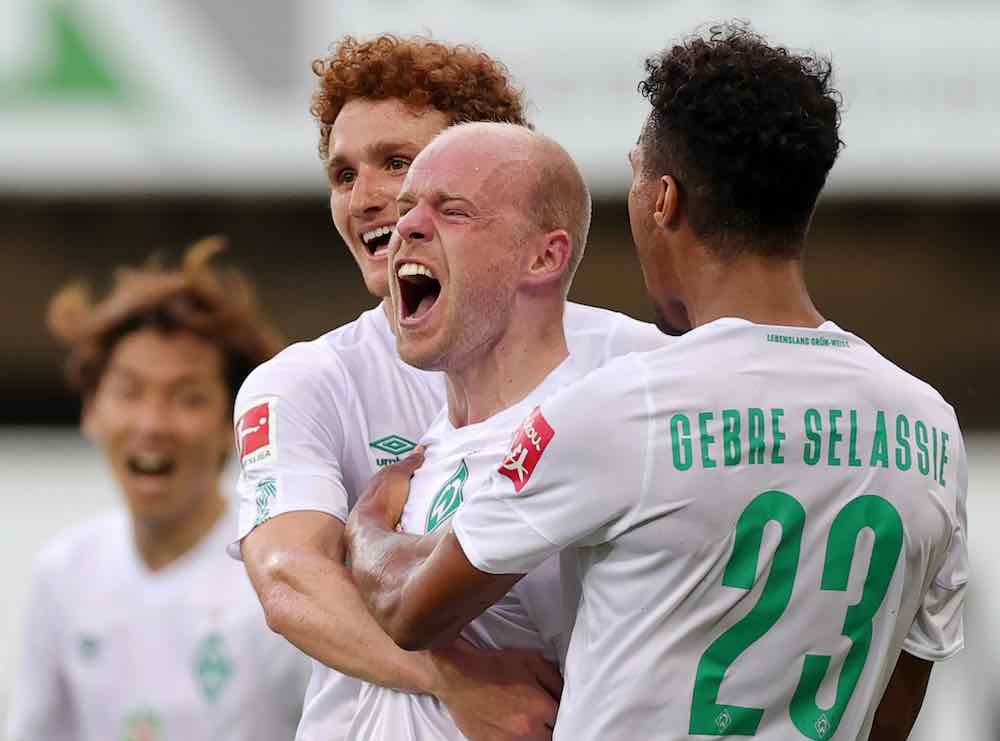 As we inch ever closer to the conclusion of this Bundesliga season, there is still much to play for at either end of the table.

Though not yet mathematically certain, first and last positions are all but sewn up. An eighth successive title is now within 90 minutes for Bayern, with relegation the same timeframe away from being formally confirmed for rock-bottom Paderborn. But just behind Bayern and just above Paderborn lie drama presentations with the potential for further twists.

The events of Matchday 31 began with Leipzig sealing a 2-0 victory in Hoffenheim on Friday night. It was a result that virtually confirmed a place in next season’s Champions League for Julian Nagelsmann’s side. 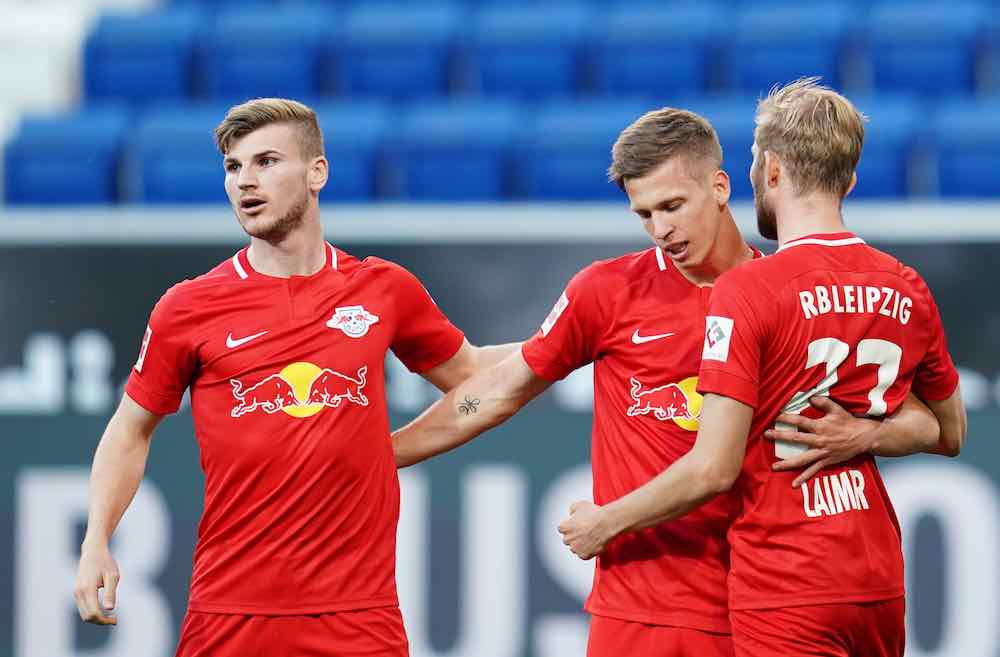 On Saturday, Borussia Dortmund made the short trip south-west to Düsseldorf. Under Uwe Rösler, Fortuna have clawed their way out of the bottom two but have remained in the relegation play-off spot. The motivation for both sides was clear: survival for Düsselfdorf, cementing second place in the table for Dortmund.

This was reflected in the pattern of play for much of the game, Dortmund striving for a breakthrough with Fortuna looking to frustrate. The slower the tempo, the more it suited the home side. The visitors thought they finally had the lead midway through the second half courtesy of Raphael Guerreiro, but VAR ruled it out for handball just before he volleyed it home. It remains a contentious call as replays suggested it struck him on the shoulder.

That decision only compounded the growing frustration amongst Dortmund the players at their inability to break down a resolute Fortuna. The home side grew in confidence and twice struck the woodwork as they sensed an unlikely win. But, as the game was petering out, it was the returning Erling Haaland who headed a last-gasp winner.

The delight for Lucien Favre and Dortmund was clear, as was the despair for Düsselfdorf. The defeat was compounded by news of Werder Bremen putting on a five-star display in Paderborn.

The emphatic 5-1 victory for Werder brought them level on points with Düsselfdorf, offering a glimmer of hope for Florian Kohfeldt. It also put Paderborn on the brink of having their immediate return to the 2.Bundesliga confirmed.

Paderborn won’t go without leaving an impression though, as midfielder Klaus Gjasula set a new record. A first-half booking was his 17th of the season and the highest in a single Bundesliga campaign. A unique honour that will surely make him the subject of future quiz questions.

Bremen’s renewed optimism might be short-lived as they host Bayern in midweek. If that’s not daunting enough for Bremen, it will be a game where a win for Bayern will crown them champions.

The champions-elect were without the suspended pair of the Bundesliga’s assist king Thomas Müller and top scorer Robert Lewandowski.

On paper, visitors Borussia Mönchengladbach had a great opportunity to grab a valuable victory, but missing Alassane Plea through suspension and losing Marcus Thuram early in the game to injury impacted their chances.

The game was a thoroughly enjoyable watch throughout, with Gladbach’s high-energy approach a feature of the first-half. A great save from goalkeeper Yann Sommer was undone shortly after when he gifted Joshua Zirkzee the opener. Gladbach didn’t wilt, and instead forced a deserved equaliser. Benjamin Pavard’s attempted clearance ended up in his own net after a wonderful ball in from Patrick Herrmann.

The second half was more Bayern and it was Pavard and Leon Goretzka combining to provide the decisive moment of the game. Goretzka has grown in stature over recent months. His late winner put the title within reach for Bayern and also hurt Gladbach’s chances of finishing in the top four. 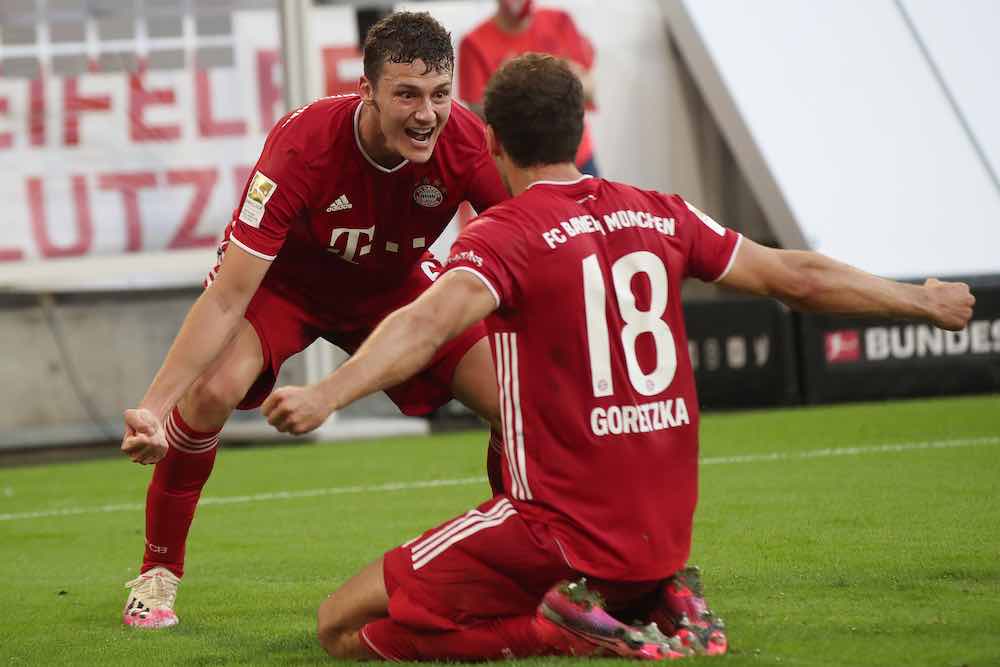 The beneficiaries of Gladbach losing ground were Bayer Leverkusen. They moved into fourth place, and Champions League football next term after a battling draw with Schalke.

Safe from the threat of potential relegation, a youthful Schalke played with freedom and attacking intent. Perhaps David Wagner could use this approach as a blueprint for the future.

Schalke’s survival was mathematically confirmed, ironically, by Dortmund’s win in Düsseldorf. It was also a result that gave Augsburg and Mainz the opportunity to pull away from danger.

The two faced off on Sunday afternoon, but there was no strolling. A goal inside the first minute from Augsburg’s Florian Niederlechner was enough to decide a spikey and tense affair.

The hard-fought victory delighted boss Heiko Herrlich and should be enough to confirm safety for Augsburg.

For Mainz, defeat leaves them perilously close to the drop. Although they are three points clear of Düsseldorf and Bremen, their upcoming opponents include Dortmund and Leverkusen. Next weekend though, sandwiched in between those fixtures, they face Bremen. It could prove to be a game that decides the fate of both teams.

But the first order of business will be the final Englische Woche of the season. A full set of midweek fixtures that are likely to be more defining for those at the top than the bottom. Then again, perhaps we’ll get a surprise or two, which would be in keeping with this fascinating Bundesliga season.