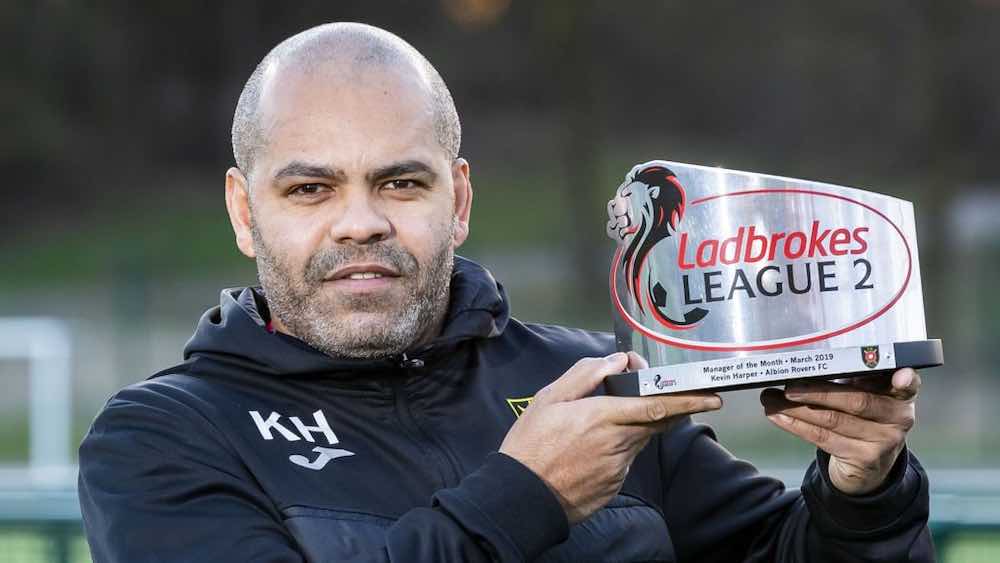 James Rowe spoke to former Portsmouth winger and recent manager of Albion Rovers Kevin Harper for WFi. They discussed his playing days with Hibernian and Portsmouth, his managerial philosophy, and the managers who influenced him.

You became manager of Albion Rovers in 2018*. How are you enjoying football management and what were the challenges of managing a such as Albion Rovers?

“Albion Rovers is my first furore into management, and it has probably been well documented that I applied for over 40 jobs and got one interview, which was the Albion Rovers one in November 2018. I became the first black manager in Scotland in 15 years.

“It was difficult at first because we were seven points adrift of the Scottish football pyramid. I had a few decisions to make when I arrived at the club and I could not change the team until the transfer window opened in January. I also did not win a match in 13 games so during that initial stage I was trying to get my philosophy over to the players on what I wanted and seeing if they were able to take it on board and adapt to it. Some players did which is normal and some did not.

“When the transfer window opened I had to change the whole team in essence. I believe I brought in 12 players and shipped out 15 players so for my first job it was a difficult introduction. but I enjoy every single minute of it.

“The biggest constraint that we have is the budget. We do not pay our players anywhere most of the teams in our league and we have the lowest budget so it becomes difficult to attract players. You have to attract them by telling them that they will improve and, most importantly, that they will enjoy the game and understand the game as well. With [what] I do as a manager, the importance of hard work which is the key thing for me.

“You have to work hard and that does not cost anything, you do not have to have talent to work hard. If you work hard you have got a chance of progressing in the game and during my up’s and down’s here at Albion Rovers I have really enjoyed it.”

You played six seasons for Hibernian FC. How do you look back on your time at the club and do you have any highlights or special memories? 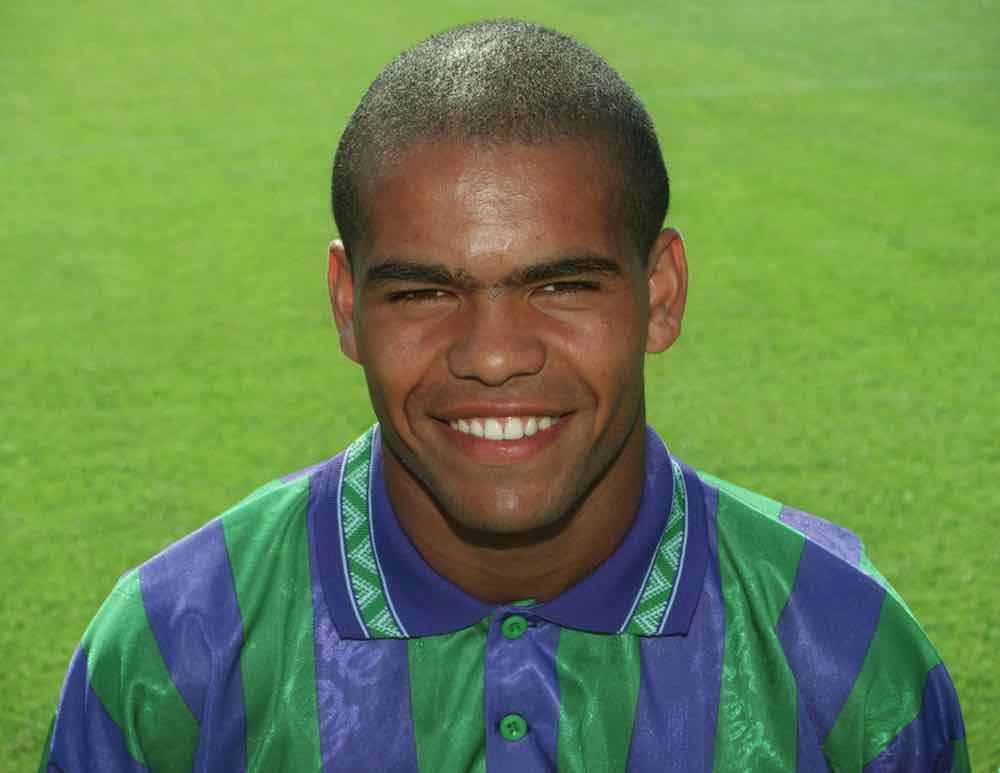 “I think that my time at Hibernian was fantastic. I really enjoyed my time at the club. I made my debut at the age of 17 years old which was something to behold at that point in time. I had only arrived at the club a year before. It was very exciting times for me as a kid growing up in a really tough neighbourhood that did not offer much [in the way of] prospects, to make my debut for Hibernian was worth all the sacrifice that I had to go through.

“I have lots of memories throughout my time at the club: Making my debut as a substitute against St Johnstone, I scored my first goal in front of the home crowd against Dundee United, scoring the winner against Glasgow Rangers at Easter Road was special, and scoring the winner in the Edinburgh Derby against Hearts on New Year’s Day.

“These memories will always stay with me and are things that are very important to me in terms of each and every milestone. The disappointing time was getting relegated just before I left the club. I left to go to the Premier League without saying goodbye to the fans, which always disappoints me every time that I think about it.”

You mentioned playing in the Premier League. You have a five-year spell at Portsmouth FC. How do you look back on your time at the club and do you have any special memories or highlights from your time playing in England?

“For me my time at Portsmouth was a fantastic time. Portsmouth are an amazing club and their fans were sensational. The whole feeling of being at a club where mostly the fans are from the local area, which is always nice.

“I have nothing bad to say about the club. It was all good and I was fortunate enough to be at the club when they stayed up in Division One on the last game of the season and seeing the joy on the fans faces when we stayed up that day.

“I went on to play a role when we got promoted from Division One to the Premier League, and during that journey there were so many different aspects of joy. Even going through the promotion-winning season and going from getting booed from the fans to having them sing and chant my name at the end of the season was exceptional.

“I had the privilege of playing with Paul Merson, Teddy Sheringham, Yakubu, Robert Prosinečki, and Alexey Smertin. So there are so many occasions where I look back on my time at the club with pride and enjoyment. Even during the tough times I really enjoyed my time at the club and for me, there is no other club like them.” 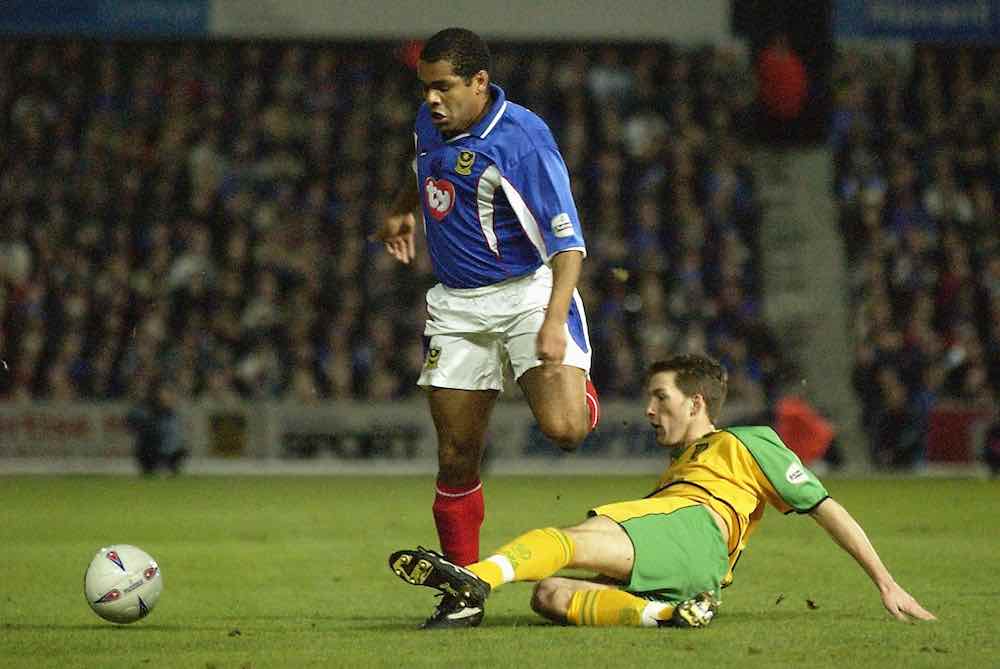 You have played under some great managers: Jim Smith, Harry Redknapp, and Tony Pulis to name a few. Did any of those managers give you any advice or encouragement when you decided to enter football management yourself?

“Yes I did. I spoke to Tony Pulis who was my manager at Portsmouth and Stoke City, and also Alex Miller when I broke through at Hibernian, for a little bit of advice, and I have spoken to them since in terms when I was going through that 13-game winless spell. What happens and how do you deal with it? Because it was very new to me and I did not know how to deal with it. I was on an emotional rollercoaster, and the biggest thing for me was drawing on my playing career. Working under the likes of Nigel Worthington at Norwich City, Harry Redknapp, and Jim Smith and Steve McClaren at Derby County.

“Jim Smith, in my opinion, was very innovative for his time. He knew what wanted to do and he was a real man-manager, and that is the side is key right at this present time.

“Man management is key. Jim Smith never held a grudge. If you did well then you played. His door was always open and you could speak to him. Even when he was assistant to Harry Redknapp at Portsmouth, he was same.

“He sold me after only 18 months when he was manager of Derby County, but there was no bad feeling from me to him or him to me. It was just one of those things in football where I did not fit into his plans at Derby, but at Portsmouth, I did, which was fantastic.

“I took a lot from each and every single manager and coach in trying to develop my coaching ability. I think the biggest thing that those managers said was: ‘stick to your principles and keep believing in what you are doing, and if you work hard it will come good.’

“Fortunately for Albion Rovers, it did, We ended up avoiding relegation by eight points which in turn probably saved the club from going under at that point.”

Finally Kevin, you touched on your managerial philosophy. could you elaborate on that and is there anything in particular that you would like to achieve in your managerial career in future?

“I want to manage full time. I am part time at the moment and my aim is to manage full time so that I can work with players day in day out and make them better. My philosophy is not about me, it is about the players. If I can make the players better then I have done my job. It should not be about what I get out of it. If the players do improve then you get your rewards without even shouting about it.

“Most importantly for me, football management and coaching should be about improving the players first and foremost, and that should be the only thing. Yes, you have to win games but I think if I was to leave Albion Rovers or get the sack from the club, I can look back and say have I improved the players and have I left the club in a better place. For me, if you do these two things then you can walk away with your head held high.

“My philosophy is good football and work hard. They are the two things. You can play poorly and work hard and if you work hard and you play poorly that shows a bit of character, because we can all work hard when we play well. It is when we are not playing well — can we do the dirty, horrible stuff that you don’t really necessarily want to do on the pitch.”

*This interview was conducted while Kevin was still manager at Albion Rovers. He left the club on May 8, 2020.