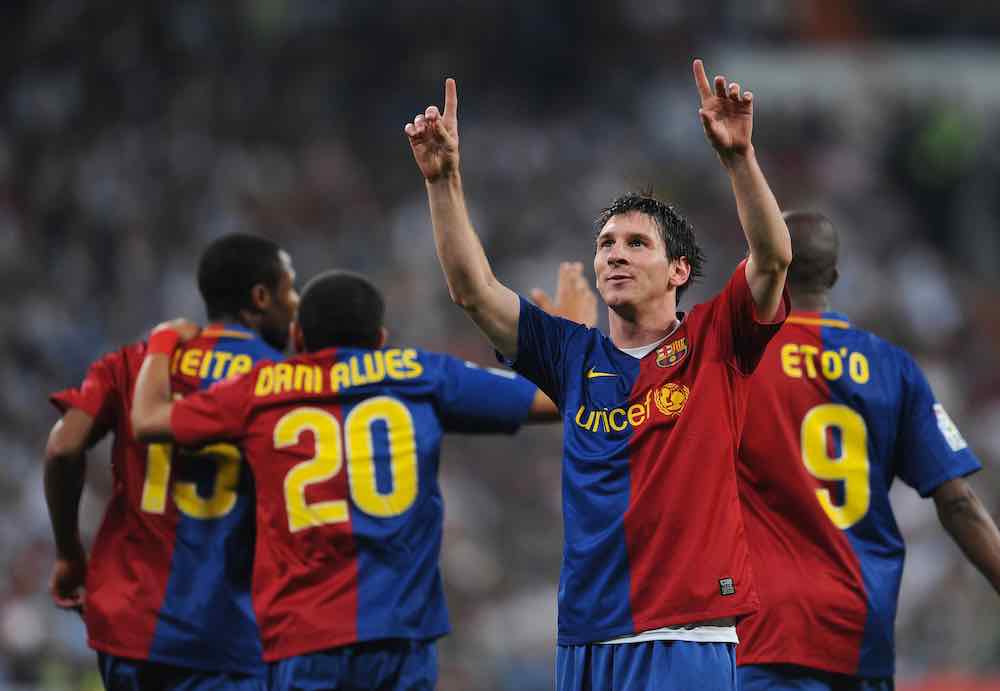 One of the highlights of their La Liga triumph in the 2008/09 season was a 6-2 win against Real Madrid at the Santiago Bernabeu.

Sachin Prabhu Ram takes a look at Pep Guardiola’s key tactic in one of the most memorable Clásico victories for the Catalan club on their way to the title.

It was the biggest win of the season for Barcelona in the league in one of the biggest rivalry matches in world football. 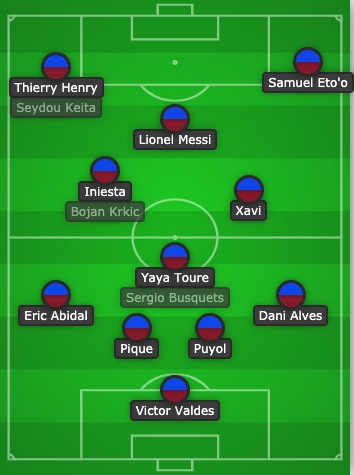 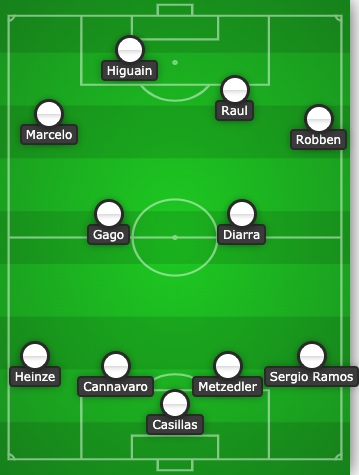 The game started with Samuel Eto’o up top as a striker and Lionel Messi playing at the right-wing, but as the game progressed Messi drifted into a false 9 role while the Cameroonian replaced him out wide.

Real Madrid aimed to exploit the flanks with Sergio Ramos working with Arjen Robben in both attack and defence, and Marcelo working alongside Gabriel Heinze.

In possession, either Raul or Gonzalo Higuain dropped deep and help build the play. They offered a passing option in the centre of the field with the aim of distracting Yaya Toure and the centre-backs away from the wingers and give them room to manoeuvre.

Every time a winger got the ball out wide, Barcelona’s full-backs would press, allowing the Real full-backs (Ramos and Heinze) to make runs and execute crosses.

Barcelona countered this with more of a zonal marking system of defending, which attempted to limit the amount of space in which opposition attackers could work. When paired with high pressing, this would force the team to lose possession.

Xavi and Andres Iniesta focused on marking Fernando Gago and Lassana Diarra, Toure marked the striker that fell deep, and the wingers (Thierry Henry and Eto’o) would take on Real Madrid’s fullbacks.

This meant that the central striker, Messi, occupied one of the centre-backs. Messi took on Christoph Meltzedler and allowed Fabio Cannavaro to distribute the ball. 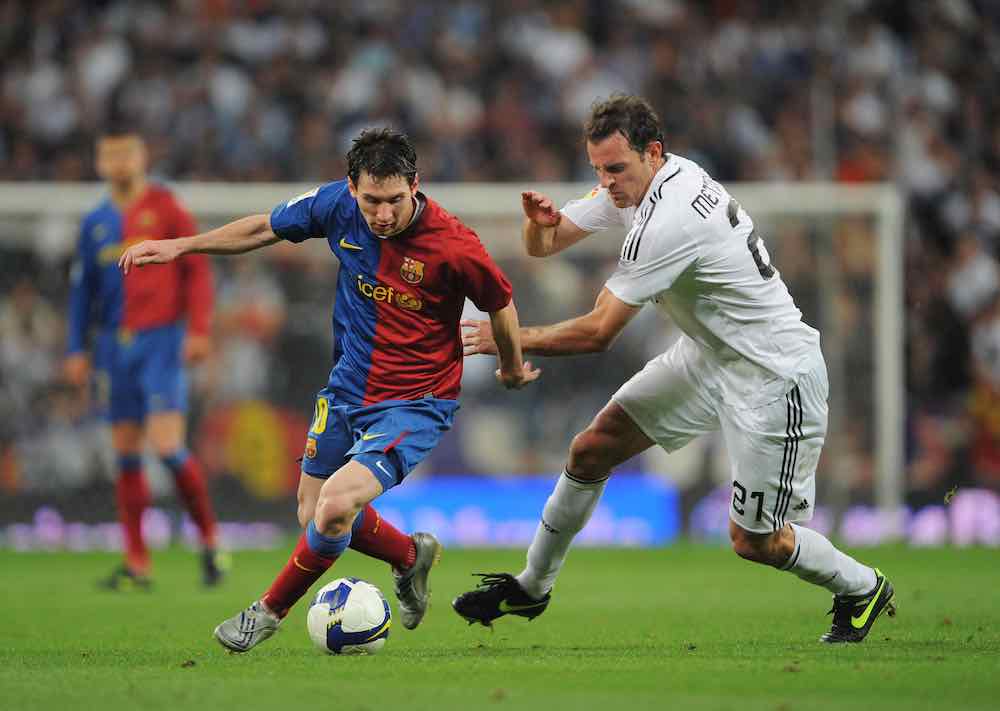 Messi was shifted to the false 9 position after noticing a key aspect of Real Madrid defence: They were not pressing high enough to pressure the area between the defensive line and the midfield. Eto’o was moved to the right and Messi more central to exploit this weakness.

After some time, Cannavaro or Meltzedler started to press Messi, meaning that they were lured into midfield. This meant that there was no cover for the fullbacks, and the creative midfielders and full-backs could play more through-balls to the wide players. 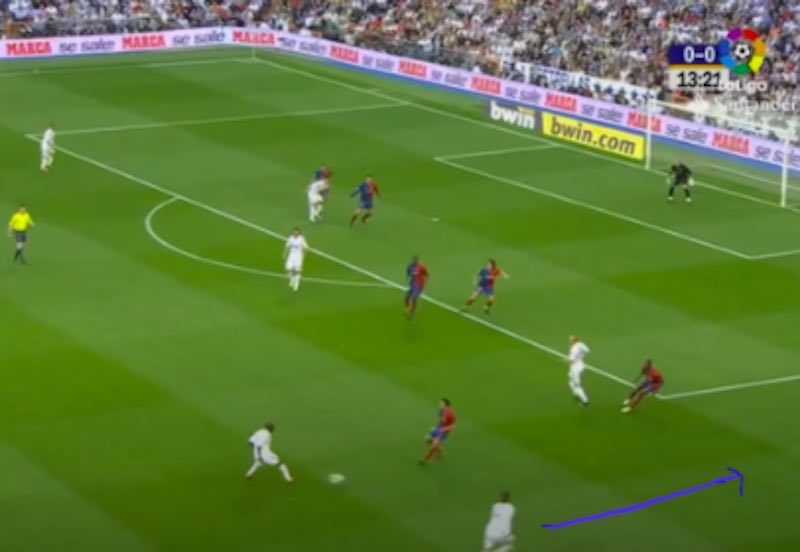 The goal came from the normal routine of exploiting the flanks. As shown above, Ramos made a run wide after the winger, Robben, distracted the Barcelona full-back, Eric Abidal.

After this, Ramos played a ball into the box and the strikers performed their usual routine. Raul drew in Gerard Pique and momentarily left Carles Puyol in no man’s land. This instance allowed Higuain to finish with a header.

Messi was able to draw Cannavaro towards him, creating a hole in the defence and leaving Ramos solely in charge of Henry. A delicate chip serving as a through-ball left Ramos stranded.

The Spaniard attempted to block the ball but mistimed it and Henry finished easily.

Xavi’s free-kick from the edge of the box — a normal freekick routine entailing all but one of the attackers — draws the defenders away.

The remaining attacker was then momentarily left open. Metzelder, Ramos, Heinze, Cannavaro and Gago were drawn in by Pique, Toure, Eto’o, and Henry, giving Puyol a gap to exploit and get his head on the free-kick.

The ball fell at the feet of Messi, who finished in a one-on-one situation. Real had a mountain to climb. 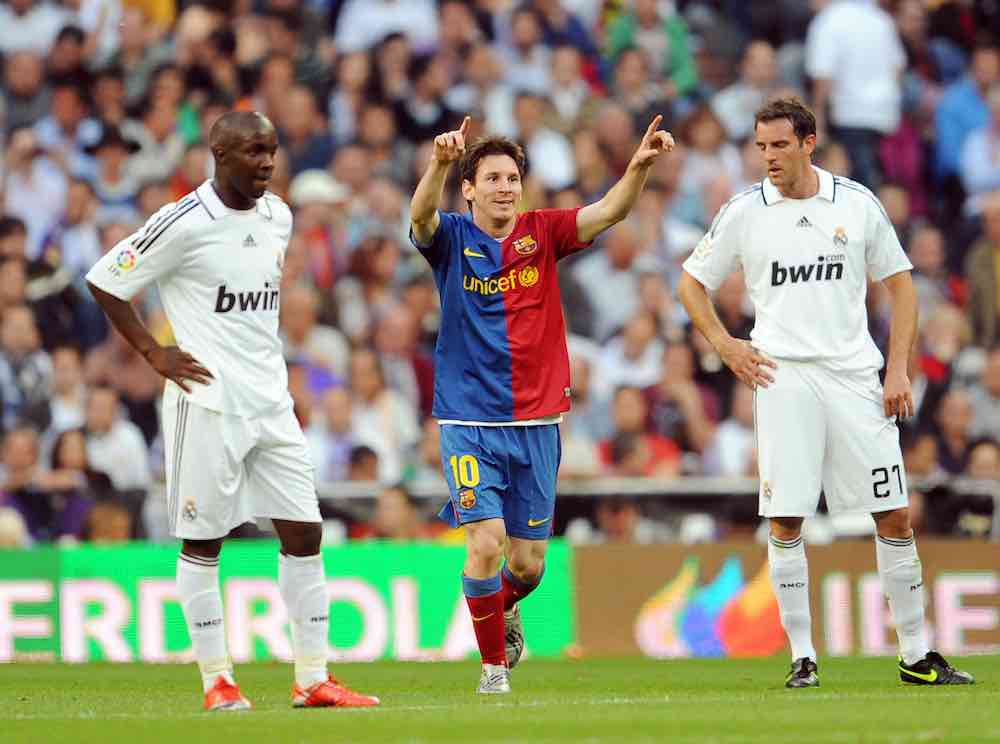 Real started off strongly, but slowly crumbled due to one main tactical change from Guardiola — shifting Lionel Messi into the false 9 role.

After this change, Barcelona started to run away with the game. They began to dominate possession and were attacking more effectively, but Real Madrid still had some remaining resistance

After halftime, Real Madrid switched to a 4-4-1-1, with Raul up top and Higuain behind him. This was to cover Toure, who was being left unmarked when Barcelona had the ball.

Robben whipped a cross into the box and Dani Alves failed in his task of marking Ramos, giving his opposite number a free header to put Real back in the game.

Xavi did not have viable passing options once Iniesta was marked by Robben, allowing Diarra to mark Lionel Messi.

Instead, Xavi played a searching through ball to Henry who had only the keeper to beat and finished past Casillas who had rushed outside of his box. 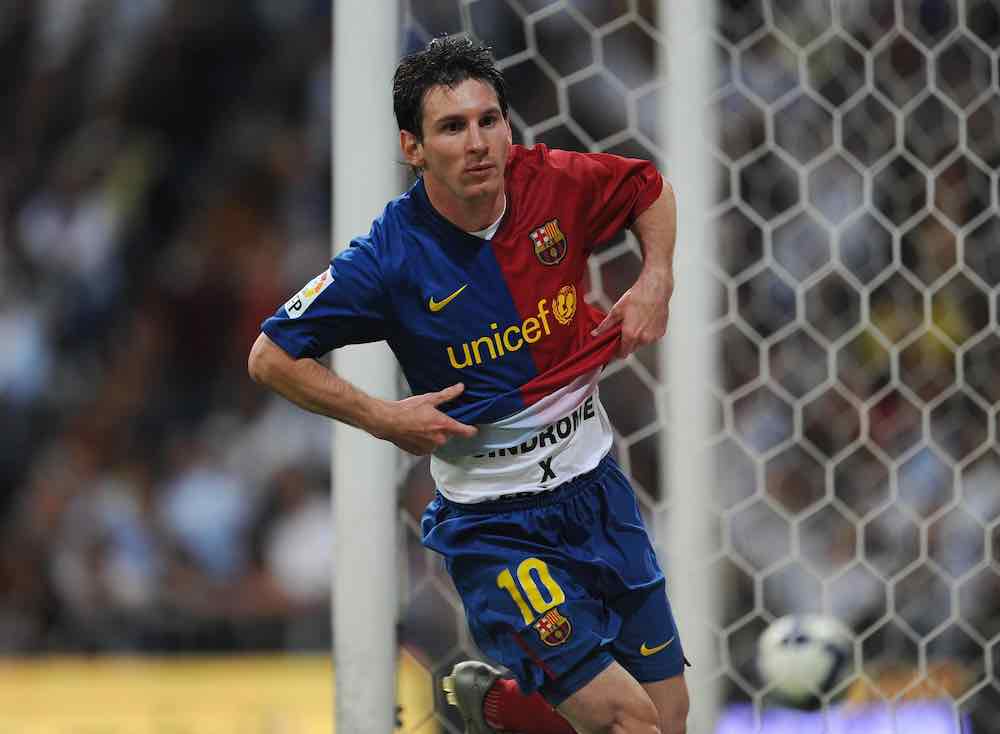 Xavi was involved again, finding Eto’o on the wing, who then played a quick pass to Alves. The Brazilian knocked it first-time to Messi, who then drew Heinze towards before playing the ball back to Xavi.

Xavi nipped around Cannavaro and Gago, returned the ball Messi who by now was on the run. This left Heinze confused and gave Messi the chance to score.

Messi played a through ball to Eto’o who ran down the wing and played a ball in to Pique. The defender runs into the box into a position to finish.

After some confusion between Cannavaro and Casillas, Pique slots the ball home to round off the scoring.

Juande Ramos, the manager of Real Madrid had to accept defeat to a Barcelona side that outclassed his team in every touch.

Xavi ended the game with four assists, and an all-round performance was capped with a brace from Henry, a brace from Messi, and a goal from each of Barcelona’s centre-backs.

This caused a scare for Barcelona’s next opponents in the Champions League semi-finals, Chelsea, who were promptly knocked out by an away goal from Iniesta.