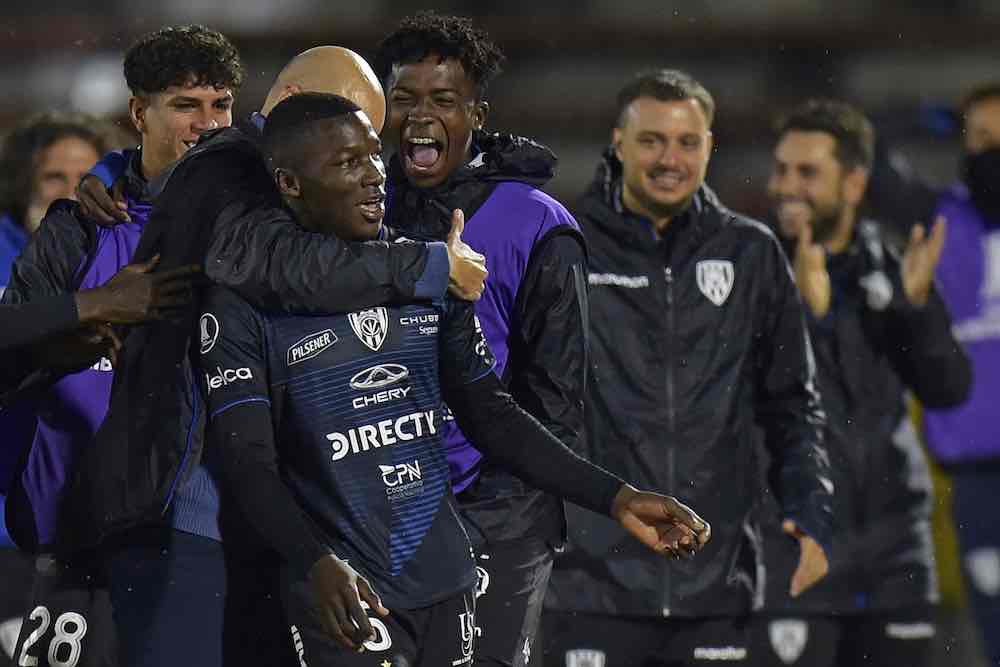 In the second scouting profile on young South American talent in the primary stage of their professional development, Adam Brandon takes a look at Moises Caicedo, a player who many in Ecuador and beyond are tipping for a great career.

Some players catch your eye over time, others catch it in an instant. Sitting down to see Independiente del Valle’s opening match of the Ecuadorian LigaPro 2020 season in February, I was looking forward to seeing how one of my favourite sides in world football had developed over the off-season having cruised to the Copa Sudamericana title at the end of 2019.

Just seven minutes into the new campaign and their first goal was scored, and it was beautifully constructed. What really made me sit up and take notice was that the protagonist of the move was a player I hadn’t recognised from the various times I had seen them the previous year — his name was Moises Caicedo.

Anchoring the side in possession, the 18-year-old Caicedo receives the ball from his goalkeeper and plays a couple of simple passes before suddenly seeing space open up ahead of him.

He bursts into this space, receives the ball back and makes a pass to break through the midfield line of the opposition — one more pass and one-second later, Independiente del Valle (IDV) have the lead. (It is worth noting that WyScout do not pick this up as a second assist)

Proven to be capable of playing defensive midfield or centre midfield so far in his career, there is also a potential for him to play as centre back or as a libero such is his intelligence with positioning and range of passing as well as being capable of dribbling with the ball too.

According to most sources he is around only 1.78 m, but is quite imposing with it. Sharp, athletic and with a sixth sense for danger, Caicedo regularly gets the better of his opponents in physical duels on the ground and in the air.

His reading of the game means his transition to European football should be a fairly straightforward one when it inevitably happens in the next year or two. He averages around four interceptions a game for IDV so far at professional level – impressive given he has many substitute appearances to his name and has been used in different midfield roles.

Caicedo sees himself as a traditional South American number 5, he has the instinct to pass and move into the right places on the pitch effortlessly which makes him ideally suited for this role especially.

In his 435 minutes at professional level to date, he boasts a highly impressive 96.5% passing accuracy. A significant portion of these successful passes are not simple passes. As the video below demonstrates, many of them are forward passes that bypass a press or are accurate long passes to escape difficult situations.

There have been occasions where he has been deployed slightly higher up the field in centre midfield, and at professional level in his 140 minutes in this role, his passing accuracy is even higher with him completing 63 of his 64 passes to date across four substitute appearances. In fact, in his 52 minutes of Libertadores football so far across two matches, he is yet to give the ball away.

It was also in central midfield where he produced his first professional goal, a stunning strike from range to put the Libertadores clash beyond the reach of Colombian side Junior.

🔥⚽🇪🇨 18 year old Moises Caicedo with this spectacular golazo to seal the points for @IDV_EC in the #Libertadores! pic.twitter.com/Ec0BTMCj79
— CONMEBOL Libertadores (@TheLibertadores) March 12, 2020

He is so highly rated by his club that he was flying between Ecuador and Paraguay earlier this year to play senior and youth Copa Libertadores football for IDV.

On Saturday 22nd February, he played away against Liga de Quito and was named man of the match in a 3-2 win. He then flew from Quito to Asuncion in Paraguay to play in the semi-finals and final of the U20 Copa Libertadores, where he was key in ensuring the Ecuadorians lifted the cup beating continental heavyweights Flamengo and River Plate.

Moises Caicedo, what a talent. Mentioned him in my preview for @TheLibertadores, but the lad is awesome from a couple of games I’ve seen. So much about him at just 18, range of passing, physique, composure. He’s been flying between Quito and Asuncion to play for IDV and IDV U20!
— Adam Brandon (@AdamBrandon84) March 2, 2020

He followed up his success at youth level of the Libertadores a few days later by flying back to Ecuador to be part of a comfortable win against Barcelona in Guayaquil in the senior edition of South America’s most prestigious competition. One week later he scored his aforementioned first professional goal.

At Independiente del Valle he has been looked after well. He had to leave behind a large family to chase his dream, IDV gave him the right education on and off the pitch, as they do with all their players, and this should stand him in good stead for the future.

One of his idols is N’Golo Kante and there are some obvious comparisons there on the pitch as well as off. In his interview with IDV TV he even comes across in the same unassuming and humble way Kante often does and Caicedo notes he admires the Chelsea star’s calmness on the pitch as something that he feels he possesses too.

In the same interview from last year, he does boast of his mathematical ability and he sees that as important for his career in terms of dealing with contracts, although the player did joke that his English needs work so a move to the Premier League might not be as tempting as one to La Liga in the near future although in the long-term that is most certainly the aim.

In an interview with ECDF, Caicedo explained that his dream is to play for Manchester United following in the footsteps of Ecuadorian football legend Antonio Valencia who he admires for his dedication to reach such heights.

Another player he looks up to is his captain and the man usually entrusted with the number 5 role in the Independiente del Valle side – 38-year-old Cristian Pellerano. The experienced Argentine has been somewhat of a wise older brother figure to the young Ecuadorian and there is great mutual respect between the two.

Pellerano believes that Caicedo has an enormous future ahead of him and praised his ability to listen to instructions as an important quality in a young player as well as the obvious skills on the ball. The two are set to battle it out for a starting place post-Covid. However, it wouldn’t be a surprise to see them play some matches together as well either side by side in a double-pivot or with Caicedo more advanced.

Despite being a model club for much of South America, IDV are yet to win the league title in Ecuador. So therefore helping IDV win that maiden league title along with a Libertadores challenge will surely be the aim for Caicedo before a move abroad materialises. His game should develop under current IDV head coach Miguel Ángel Ramírez, a Spaniard with a very good track record in coaching young talent which is why he was brought over to Ecuador having worked in Qatar’s Aspire Academy in recent years.

His short-term international prospects look promising too. Ecuador U20s deservedly won the 2019 South American Championships in Chile before finishing third in the world in Poland in the World Cup. Caicedo wasn’t part of that squad, but he will likely be the star man in next year’s competition if Covid-19 doesn’t stop it — where Ecuador should be able to field a very competitive side once again.

This has been reiterated by journalists who witnessed a friendly in November last year where Ecuador’s latest generation of U20 talent were said to have outplayed the senior side of Delfin (current champions of Ecuador). Ecuador U20 boss Jorge Celico has already said that many in the Independiente del Valle U20 side that conquered South American club football will be able to provide a very good base for his next assault on U20 international football.

Beyond that, Ecuador are currently going through a rebrand off and on the pitch with Jordi Cruyff appointed head coach at the end of last year. In the national team context, the peerless maturity and footballing intelligence of Caicedo will surely appeal to the Dutchman, so I expect him to be part of his plans. There is competition there from older players, but none possess the range of qualities that Caicedo has and I would expect him to be at least invited to train with the senior side in the coming year.

It is early days for Caicedo, and any move to Europe within in the next year might be just a bit too soon. However, there is little doubt the player has all the attributes and attitude to become a key player for a big club in Europe at some point in the future.

Loading...
Newer Post
Analysis Of Barcelona’s Historic 6-2 Victory At Real Madrid In May 2009
Older Post
Sean Clohessy On His Time At Southend United And Coming Through Arsenal’s Youth Academy