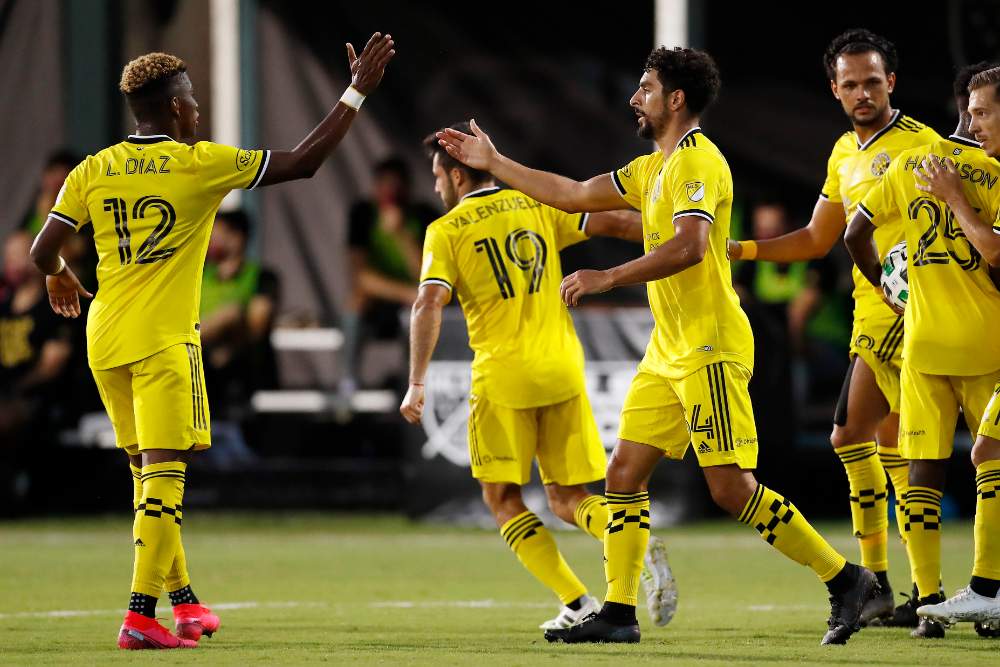 Atlanta United crashed out of the MLS is Back tournament with a 1-0 defeat to Columbus Crew on Tuesday night.

Heading into their final group match in Orlando, the Five Stripes knew nothing less than a victory would do if they were to even stand a chance of scraping through to the knockout rounds.

However, some late chances aside, Frank de Boer’s men never looked like making a fist of it and were deservedly beaten thanks to an 18th-minute strike from Youness Mokhtar, who had to withdraw from the match early due to injury.

As a result, things are now looking bleak for De Boer, who is coming in for serious criticism from the Atlanta fanbase, while for Caleb Porter, things couldn’t be better right now.

1. Atlanta United Are Out Without A Goal

Well, that’s it. Atlanta United, 2018 MLS Cup champions and 2019 Campeones Cup and US Open Cup winners, are out of the MLS is Back tournament without scoring a single goal.

Where do you even start with the horrendous, lethargic showings Five Stripes fans have had to sit through since their side returned to action?

De Boer’s men have completely failed to deal with the absence of Josef Martinez, with Adam Jahn, Manuel Castro and Pity Martinez all trying their hand in the centre-forward position to no avail. Barring a late flurry of chances, a resolution to this problem appeared nowhere in sight on Tuesday.

The lack of midfield options has been striking, with Atlanta centre-backs forced to play sideways all too often thanks an unwillingness to drop in and show for the ball from those ahead of them. Every single player in red and black has looked scared to either attempt line-breaking passes or run at opposition defenders throughout the tournament and that cautious attitude has seriously hampered Atlanta’s creativity.

There is literally NOTHING in midfield 👀 can’t blame the centre-backs too much for passing sideways when nobody is showing for it! #UniteAndConquer #ATLUTD #MLSisBack

And then, for all the problems going forward, the lack of defensive cohesion and organisation has been absolutely terrifying to behold. During Atlanta’s opening game against New York Red Bulls, Florian Valot was able to ease into the box and beat Brad Guzan without anything resembling a challenge, ghosting through a seemingly non-existent left side of the Five Stripes’ defence. On Tuesday, history repeated itself within eight minutes as Luis Diaz took the ball with George Bello, Fernando Meza and their covering midfielders absolutely nowhere in sight. Luckily for De Boer this time, Diaz was unable to capitalise on the terrible defensive positioning. Of course, it wouldn’t be long until Mokhtar fired the Crew ahead.

There’s a big old regular season to come after MLS is Back concludes so to say Atlanta United are done would be premature. However, there are glaring and urgent problems to solve right across the pitch if they’re to even think about battling for a playoff spot, let alone challenge for honours.

2. Columbus Aren’t Weighed Down By Hype

With the Crew already safely through to the knockout rounds, you could have forgiven them for taking their foot off the gas and, subsequently, giving Atlanta a fighting chance in this one. Equally, you would probably understand it if they crumbled slightly under the lofty expectations now being placed upon a side which finished 10th in the Eastern Conference in 2019, such has been their start to this season.

However, none of that happened. Instead, Porter’s men started Tuesday night as if they were the side needing the result. The Crew pressed Atlanta high up when they sensed a mistake and dropped back into a solid block when they wanted to stop the opposition playing through their lines.

Going forward, Columbus preyed on Atlanta’s lack of defensive understanding all night long to generate some serious chances and, in all honesty, could have been out of sight by half-time.

Sure, Gyasi Zardes wasn’t quite up to his usual standards, and Lucas Zelarayan was only brought off the bench for the final half-an-hour, but Columbus still played out Tuesday’s match with skill, fluidity and brilliant professionalism. It’s been said a few times recently but we’ll say it again, the Crew are rightly up there among the favourites to win the MLS is Back tournament.

Much has been made of Darlington Nagbe’s influence on this Columbus Crew midfield — including in our very own North American Soccer Show podcast. On the evidence of Tuesday’s performance, it’s easy to see why.

Incredibly, Nagbe completed all 43 of his attempted passes during the 81 minutes he was on the pitch, taking the ball with ultimate composure and, at times, teasing his former Atlanta United teammates with his accuracy and precision.

What’s more, Nagbe also contributed to his side’s defensive effort with two tackles and an interception, while he was dribbled past just once on the night, ensuring the likes of Pity Martinez and Ezequiel Barco were snuffed out at every single opportunity.

Of course Zardes and Zelaryan, or ‘ZZ Top’ as they’ve comically become known, will take most of the plaudits for the Crew’s current form. However, Nagbe has re-energized Porter’s midfield no end. Artur is thriving next to him, his centre-backs know they always have a passing option and the opposition can only despair at trying to get the ball off him. You’ll do well to find a better deep-lying midfielder in Major League Soccer right now.