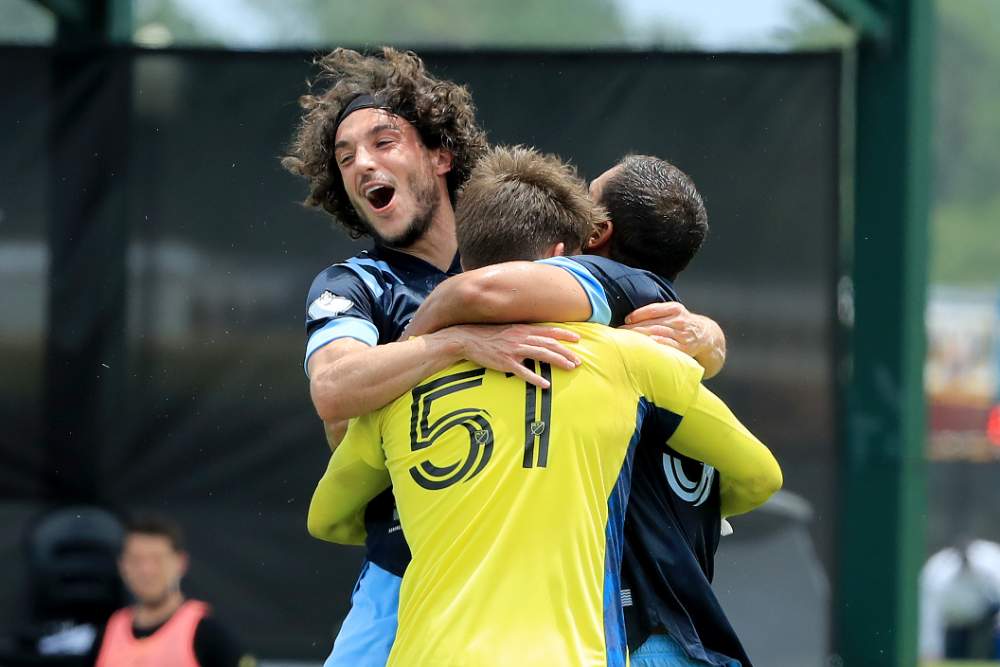 The Vancouver Whitecaps captured a 2-0 victory against Group B rivals Chicago Fire Thursday to claim their place in the MLS is Back knockout rounds.

Both sides once again were pit into a must-win game in which victor would advance and take their shot at tournament glory. However, Vancouver needed a win by two or more goals to clinch a spot, which made their task even tougher.

The Fire were coming off a 2-0 defeat to group leaders San Jose, while the Whitecaps were looking to bounce back after two straight defeats to begin the tournament.

At the start of the match, Chicago seemed the better of the two teams, pressuring Vancouver into their own half but not creating many clear-cut scoring chances.

The Whitecaps got a grip of the game after half-time, with head coach Marc Dos Santos introducing South American attackers Cristian Dajome and Yordy Reyna off the bench to give the Canadians a boost of energy going forward.

Shortly after making those changes, the match was delayed at the 63-minute mark due to warnings of thunder in the area, forcing the teams to head back inside for an hour.

After referee Armando Villarreal stated the area was clear to begin play, the Whitecaps came out flying.

Cristian Gutierrez, former fullback for Chilean side Colo-Colo, found Iraq international Ali Adnan in the middle of the park with a wonderful defence-splitting pass.

Adnan turned and drove into space, finding Peruvian striker Reyna who calmly dribbled past Fire goalkeeper Kenneth Kronholm to give the Whitecaps a much-needed 1-0 lead.

Only six minutes later, Adnan again found Reyna in some space, this time with a solid header off a Vancouver goal-kick.

Reyna then played a sublime ball towards the goal-bound Dajome, who neatly tucked it under Kronholm to make it 2-0, exactly the type of scoreline Vancouver needed to go through.

This match wasn’t done without its fair share of controversy, though, as Chicago were adjudged to have put the ball into the net via the hands of striker CJ Sapong.

Was it a handball on CJ Sapong? Should the goal have counted? 🤔https://t.co/yBZnjoGuOj

After video review, the referee deemed it a clear and obvious error, disallowing a potentially heart-breaking goal for the Whitecaps.

Endless waves of attack followed from the Fire, but the Whitecaps managed to hold on to clinch a spot in the MLS is Back Tournament knockout rounds against all the odds.

Although Chicago dominated this one in terms of possession, there are a couple of points to breakdown that contributed to Vancouver’s massive win.

Fire head coach Raphaël Wicky made three changes from the side who started against San Jose, with Jonathan Bornstein, Fabian Herbers and Ignacio Aliseda coming in for Miguel Angel Navarro, Luka Stojanovic and CJ Sapong.

Meanwhile, Dos Santos opted to go with his third formation change this tournament, utilizing the 5-3-2 for this match with four swaps to his previous eleven.

21-year-old goalkeeper Thomas Hasal made his debut start in place of the injured Maxime Crepeau, while Derek Cornelius, Theo Bair and Ryan Raposo each made their first starts of the tournament.

Keep in mind the average age of Vancouver’s starting line-up was 23, the youngest in MLS history.

Throughout the group stages at MLS is Back, substitutions have played a big part in making a difference late into matches, with nearly a quarter of the tournament’s goals being scored in the last 15 minutes.

Thursday morning was no different.

Having started his main three attackers on the bench, Dos Santos decided to give youngsters’ Theo Bair and Ryan Raposo their first starts of the season.

Both showed glimpses of their abilities during their 51 minutes on the pitch, but just couldn’t settle into a nice rhythm or conjure up any decent chances.

Dos Santos decided to introduce Reyna and Gutierrez across a five-minute span which, barring the unprecedented weather delay, completely turned the game around.

The introduction of Gutierrez at left-back meant Adnan would slot into the left midfield position, with the Chilean-Canadian making his second appearance for the Blue and White.

Dajome, who was subbed into the game in first-half stoppage time due to an injury to centre back Jasser Khmiri, was also very influential once those three subs came on.

After the weather delay, the combined pace and fresh energy of Reyna helped guide the Whitecaps to victory.

Chicago didn’t seem prepared to deal with the pace of Vancouver’s offence, allowing Reyna to sneak through, hold off a couple of defenders and round Kronholm for the first goal.

Gutierrez deserves a lot of credit in the build-up of the goal for picking out Adnan with an inch-perfect, defence-splitting pass to open up space for the Whitecaps attack, something they were heavily missing in their loss to Seattle last Sunday.

“Gutierrez had so much legs in him, energy in him, that we knew with Ali there, and with Guti on the left we would create a lot of two v ones in those areas and that was the objective. Ali played the first ball to the [first] goal, then Ali also won the header that led to the second goal, so it worked. It worked. And it’s another option we have, and it’s good that in the roster you have a lot of options that can help the team.”

Against the Sounders, Vancouver weren’t making use of their possession in these tight spaces or gaps in midfield, thus preventing them from creating any dangerous opportunities for the front men and they showed Thursday morning they’ve been working on it.

If the first goal wasn’t enough of an example, look at the second.

It’s all about Reyna finding the pocket of space in midfield, turning, and sending Dajome through on goal, it’s a detail which looks fairly simple but in reality, it’s tough to put yourself in those pockets.

Give Dajome credit, too, for running into space and making the run, something the Whitecaps were also missing drastically against the Sounders.

In the end, Reyna’s play won the game for Vancouver, as the Peruvian finished with a goal, an assist, three dribbles and one tackle.

The Chicago Fire dominated this game in terms of statistics, finishing with 61% possession, 455 total passes and 25 shots.

However, lots of praise has to go out to Vancouver for making use of the little possession they had in key areas of the field and their complete defensive performance.

From back to front, the Whitecaps made it difficult for the Fire to break them down, putting numbers in front of the ball and making key clearances far from their penalty area.

One of the main defensive standouts for Vancouver was Canadian centre-back Derek Cornelius, who led the defence with three blocks and a whopping 12 clearances.

Cornelius offered a calming presence at the back and was comfortable playing out of the back, oftentimes combining with the midfield three of Hwang, Owusu and Teibert.

Having played his first full 90 minutes since March, the Canada international finished with team-highs in passes and should be the likely candidate to partner Serbian youngster Ranko Veselinovic at the heart of the defence.

Other defensive standouts included Jake Nerwinski, who made several crucial tackles in the final 10 minutes to preserve the win, and Adnan himself.

Vancouver will now wait for their next opponent to be officially announced, which could be either of Sporting KC or Toronto FC, while Chicago head home after a disappointing tournament.