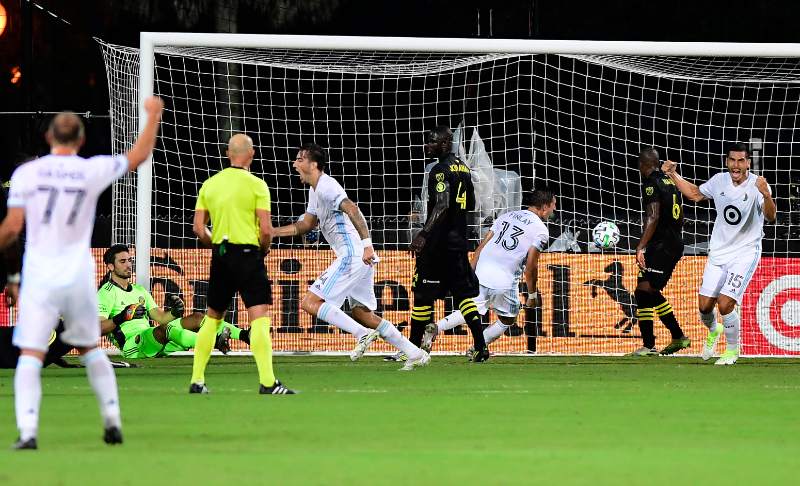 Columbus Crew became the latest favourite to crash out of the MLS is Back tournament with a 5-3 penalty shootout defeat to Minnesota United on Tuesday night.

Caleb Porter’s men made it through the entire group stage without conceding a single goal but fell behind to an early Robin Lod effort after some sloppy defending from a Minnesota corner.

Adrian Heath’s side did a wonderful job in stifling Columbus’ creative players but almost pressed the self-destruct button when Jose Aja conceded a penalty in the dying minutes. Gyasi Zardes missed the initial effort but was able to fire the rebound beyond Tyler Miller.

However, the Loons recovered to win their penalty shootout, scoring all five spot-kicks to capitalise on Chris Cadden’s miss.

So, with the Crew heading back to Ohio and Minnesota sticking around in Orlando, what did we learn from the match?

Lod will rightly take a large portion of the plaudits for scoring the opening goal on Tuesday night but the Loons would undoubtedly have struggled to keep a lid on the Crew were it not for the efforts of the double-pivot operating behind the Finland international: Osvaldo Alonso and Jan Gregus.

Alonso and Gregus worked up a superb partnership last season as Minnesota charged all the way to the US Open Cup final and reached the MLS Cup playoffs for the first time in their history.

That understanding was on full display again here as the duo worked their socks off to deny Lucas Zelarayan and Pedro Santos the space in which to create in the final third. Alonso and Gregus made a combined eight tackles and six interceptions between them on the night, providing a screen in front of a defence still adjusting to life without the leadership of Ike Opara, who didn’t make the trip to Orlando.

Sure, they still allowed Darlington Nagbe to pick up the ball with regularity, but it was always in deeper areas where his passing is less dangerous, while the pair worked hard to cut out passing lanes into the Crew’s creative outlets further forward.

When the Loons did win back possession, Alonso and Gregus were the calm and cool heads in the middle, slowing things down to Minnesota’s pace and allowing their teammates a breather. By the end of the match, the pair had notched up 89% (Alonso) and 88% (Gregus) pass completion rates respectively and had a combined 109 touches of the ball.

Columbus Crew’s midfield has been one of the most impressive components of any side during MLS is Back so caps must be tipped in the direction of Alonso and Gregus, as well as manager Adrian Heath, who got his tactics spot on. It’s fitting that the pair were part of Minnesota’s perfect penalty takers at the end of the match.

With a couple of rash challenges and cynical moments in the first half, the warning signs that Jose Aja was going to press the self-destruct button were there for all to see for those tuning in on Tuesday night. However, the problem is, with Opara stuck at home, there is little Heath can do to effectively rotate his defensive structure, so the Uruguayan remained on the field.

And in the 78th minute, just when it seemed like Minnesota could actually ride out the Crew storm to progress smoothly to the quarter-finals, that moment of madness descended quicker than an Orlando thunderstorm, with the 27-year-old senselessly lunging in on Derek Etienne Jr despite the Haitian having his back to goal and seemingly moving into a position of relative safety for the Loons.

After a brief instance of confusion, it became clear that Allen Chapman had pointed to the spot and although Tyler Miller was able to block Zardes’ first effort, the UMSNT international gladly fired home the rebound to take the game into a shootout.

No matter, Aja’s teammates managed to spare his blushes with a shootout win, but Heath will be keen to address his centre-back’s mean streak ahead of the next round.

Well, it only took 288 minutes but Lod’s goal finally saw the Crew’s goal breached for the first time in this MLS is Back tournament. In the end, their one and only goal conceded proved to be quite fatal.

Is there a shock on the cards? 👀

Try as they might, the Crew just couldn’t get Minnesota’s defensive block to budge and in the end, it took Aja’s mistake to finally force a penalty, which Zardes missed but fortunately bagged the rebound. That said, given the level of pressure they applied to the Loons, Columbus didn’t generate anywhere near enough in front of goal and that one sloppy moment from a Minnesota corner now looks that much more costly given their shootout defeat.

Caleb Porter will undoubtedly be disappointed at exiting the tournament and will see it as a chance missed to seal a long-awaited return to the CONCACAF Champions League and lift some silverware.

That said, the fact they allowed just one goal from four matches represents a great turnaround for a side that conceded 47 goals during the regular season in 2019. With that in mind, Porter and his squad will be heading back to Ohio with a number of positives to build upon once the 2020 campaign gets fully underway again.