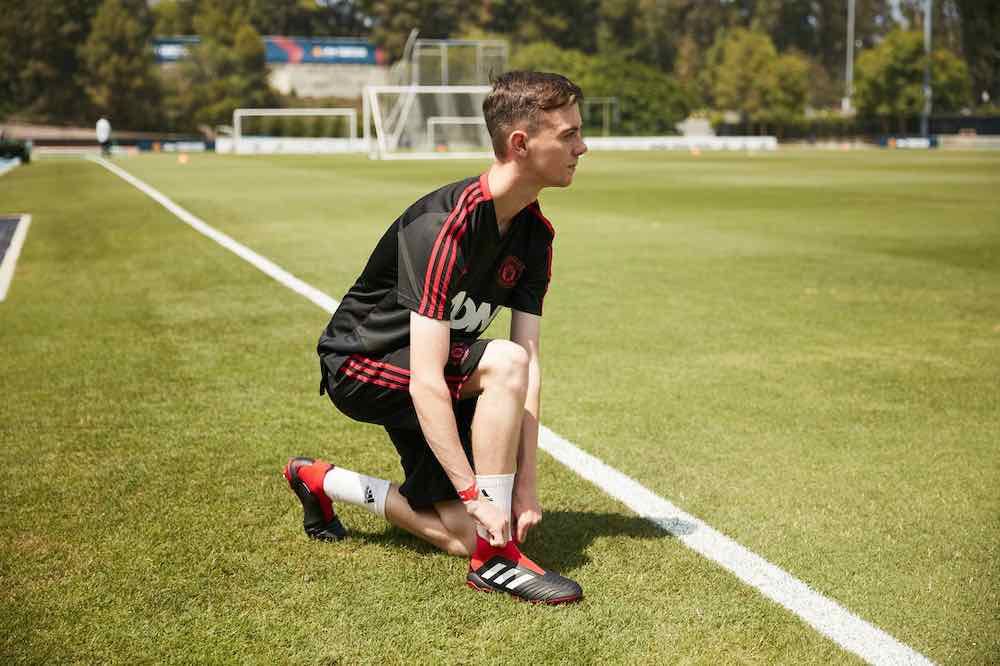 WFi’s Tom Caldwell spoke to Tom Nolan, a football freestyler who has trained with Manchester United, appeared at Wembley, and has collaborated with some of the game’s biggest names.

As a freestyle footballer, what made you veer away from the traditional football route?

“From as far back as I can remember I always had a football at my feet. When I was younger I was playing all the time for fun and was always told I was a very technically gifted footballer. For my age I was definitely better than your average player on the ball.

“When I was 13 or 14 in high school and everyone was expecting me to be so good every time I played and it got to a point where I just stopped enjoying football, as weird as that sounds, it became more of a chore than a hobby.

“Looking back on it I was probably just a stubborn teenager but yeah that’s where I stopped playing on a football team for a while.

“I didn’t quit playing football altogether. I was still training skills every day, watching The F2 replicating their skills and showing off to friends which increased my technical ability on the ball. I began to build a name for myself excelling in this area of the game. People didn’t even want to play 5-a-side against me as they thought they’d just get skilled out!

“Year 11 of high school, I posted my first video and it hit a million views. I live in Luton and the video was being shared everywhere. The whole school was talking. It got to the point I would go to my local football pitches and occasionally be recognised.

“A fun side-story is I took construction for my GCSE as I thought it would give me more free time to mess about and practice skills, even in lessons wearing steel toe caps my old teacher always reminds me of the stories of me doing skills with the bricks.

“After the success of that video, I just knew this was what I wanted to do.

“Although I stopped playing, all my videos are based around ‘real football’, focusing on the craziest touches, techniques, hitting impossible targets which can be implemented into the real game rather than just skills. This has definitely helped me link it to the professional game.”

Did you do any freestyling with Manchester United? If so who was the best?

“I remember Mata got the ball and was doing kick-ups, he then went to kick it right at my face but just before it hit me he put his hand in front of the ball as a fake shot and I remember proper flinching and I knew straight away he’d got me bad.

“It was a great laugh just talking and knocking the ball about between us you get to see first hand how nice these guys are as well as their talent. Everyone in that circle had some serious skill.

“Believe it or not, I was surprised how comfortable they picked things up but I guess it just shows the work they’ve put in to perfect their craft.”

What is the most exciting moment of your career so far?

“It’s hard to pick one most exciting moment since the start of @tnfreestyle although my top 3 moments probably are:

“1) Adidas letting me know I’m going to have my own ad featuring me and The F2 to launch a pair of Adidas GLITCH football boots as I was an ambassador.

“As I started the journey because of The F2 being told this was a massive opportunity for me which ended up going great which led to me being invited to represent The F2 in the Wembley Cup and win [a prize that meant] Steven Gerrard played on our team at Wembley.

“They were buzzing that I won them the challenge in the build-up episode to secure the biggest legend in the series to play on their side. Billy went out of his way to give me a shoutout on his Instagram bigging me up which sent my Instagram crazy which I gained nearly 15,000 followers from giving me the platform I needed to potentially have a future in the football videos. This is a massive reason I’m in the position I am.

“2) Getting the call saying I’m going to LA with Manchester United, and that whole experience. It really is once in a lifetime stuff that money can’t buy. This is easily my best life experience to date and I’m incredibly grateful they chose me to experience the opportunity.

“3) Returning from injury / being away from the scene and smashing the Soccer AM top bin shot. I knew that exact moment I was coming back with one of the best football videos that have ever been posted online.

“It was a really exciting time for me as when I was injured I felt a lot of pressure to come back and wasn’t sure if I’d be able to live up to the expectations people had of me, especially after being away for so long.

“This shot went crazy viral within days and done 10 million+ views in 25 days.”

How was the Wembley Cup with Spencer Owen?

“The Wembley Cup was a great experience, from being involved in the build-up series, to The F2 shoutout, to featuring on the day — it was a surreal experience meeting and taking photos with so many people recognising me. It was the first time I’d really been recognised by so many away from Luton.

“It was a top moment and really motivating to keep pushing myself to take it further. I’m still in contact with a lot of people I met during that, and in the Club Wembley after-party, and it was a real opportunity for me to network with a lot of people in the scene that I could learn a lot from back then who had made names for themselves.

“Spencer Owen is a top guy who I still am in contact with now. I actually commentated a Hashtag United game alongside him earlier this year.

“I think what he’s done with the Wembley Cup is unreal really, bringing the online football scene to another level. A great opportunity to meet the people who support and make things like that possible too.

“He and The F2 have really paved the way for what’s possible in the online football world. Spencer is definitely someone that without some of the things he has made possible I would not be in the position I am today.

“The Wembley Cup was where I first was able to really draw attention to my social platforms and make a name for myself.”

Who were you most shocked by at the Wembley Cup in terms of legends?

“Easily Steven Gerrard. He was the biggest legend available to play on either Spencer or The F2 team. When I got the call up for The F2 to represent them in the biggest legend episode I knew the pressure was on as they really wanted him on their squad as well as being familiar with him from shoots they had done. To win this was great as I knew how much it meant to the team.”

Tell me about some of the pros you’ve met.

“I’ve been fortunate enough to meet a lot of top players through the tnfreestyle journey from the whole Man United and Chelsea squads, and big names like Roberto Carlos, Kaka, Paul Pogba, Frank Lampard, Eden Hazard and some [other]world-class players.

“I actually ended up being given a pair of UCL match-worn boots from Pogba when at the time he had just signed for Man United.

“I’d have to shout out Danny Welbeck here too. I did a shoot alongside him for Adidas and he’s a great guy, proper funny, and even had me in a headlock at one point for chucking banter his way. He was a great laugh to be around.

“I remember him being impressed with my technique hitting the ball which is always great to hear from professional players.

“Lampard was a surreal one as growing up he was one of my favourite players but I ended up meeting him three times in the space of weeks and actually ended up watching the Champions League Final sat next to him at a private screening.

“That was crazy but I’d have to say Juan Mata has to be up there as one of my favourites. He’s a top guy, gave me some great advice and really welcomed me throughout my time with the team in LA.

“He was very supportive of what I’m doing and made sure to remind me I had the potential to make it. He’s definitely given me advice that sticks with me to this day and I’ll always be thankful for the support he’s shown.

What was it like at Man United? With the squad and Jose Mourinho.

“Man Utd really looked after me out there. Before travelling to LA I had been to Old Trafford to be present for an F2FC game and had met a few people at the club. One lady in particular to whom I also owe a lot, and she ended up being the one looking after us when with Man Utd on the tour and everything else we did out there alongside the club.

“I felt comfortable as I was fortunate enough to have met her before. She introduced me to some of the players which really helped me settle in and break the ice with the players I was going to be training with later in the trip.

“That’s actually how I got introduced to Mata, Ander Herrera, and Scott McTominay, who I ended up speaking to the most out there as I mentioned earlier.

“We had the chance to interview Mourinho and ask him our own questions on one of the days, and he gets a lot of bad press saying he’s not very open to talking but he was so different to what I had expected. He was very welcoming. He asked how I was finding the trip so far, if I’m looking forward to training etc. I really couldn’t say anything but good things about Mourinho from my own experience.”

A message from tnfreestyle: “To everyone in lockdown that plays football use this free time as a positive to invest in yourself, train and develop your game, even if it’s just an hour a day I put and still do put a lot of hours in to stay at the top of my game.

“Put the work in and come out of lockdown a better player than you entered it, use it to your advantage and not as an excuse!”