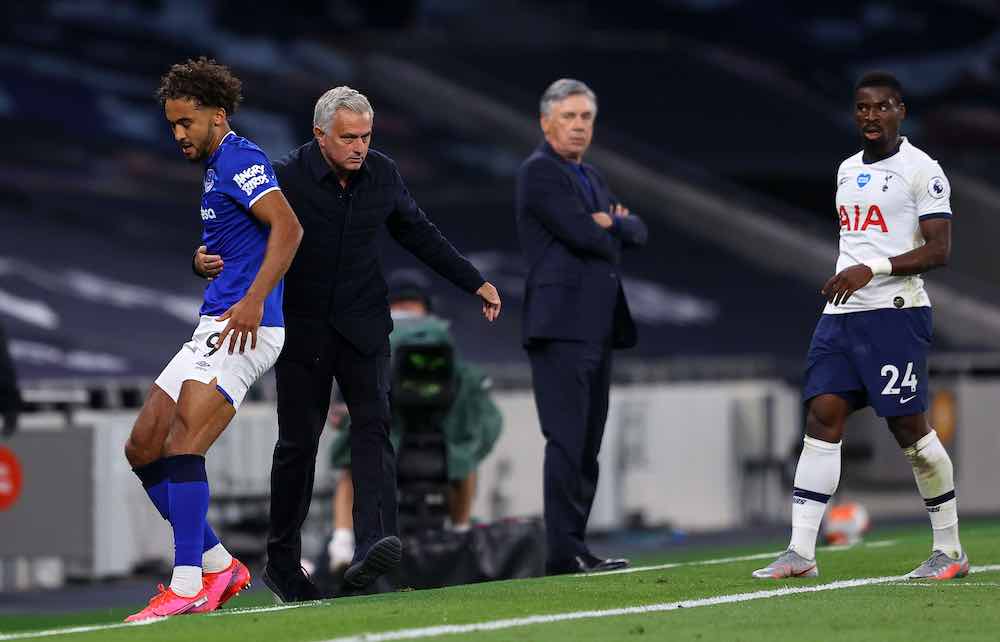 Project Restart has offered up a football product in many ways stripped to its bare essentials. Lacking atmosphere as well as the pomp and self-importance usually inseparable from the Premier League, England’s gleaming stadiums have become but a cipher for 22 finely-tuned athletes to compete.

On this early July evening in North London, competition wasn’t the word that came to mind when describing Tottenham’s 1-0 victory over Everton. The hosts took the lead midway through the first half through a Michael Keane own goal, but in truth, this was a scoreless draw in all but name.

Both sides are in an unusual spot. Spurs are in a rough patch and came into the evening off the back of a humbling 3-1 defeat at the hands of Sheffield United last time out that had José Mourinho publicly questioning his players’ mentality.

“It’s not a performance of incredible quality, but it’s a team performance against a very good team.”

Everton have been steadily improving under Carlo Ancelotti if still looking a little short, and were intent on building on a good 2-1 victory over Leicester City with a strong showing to strengthen their late-season push.

The tie’s decisive moment came in the 23rd minute. Harry Kane’s effort took a deflection in the penalty area and fell to Giovani Lo Celso, whose resulting shot ricocheted off an unfortunate Keane and past goalkeeper Jordan Pickford. The game had been on an even, if unspectacular, keel until that point, but the goal forced Everton to come out of their shell and try to take the game to their hosts.

To put it bluntly, they didn’t. Everton’s midfield of André Gomes and Gylfi Sigurðsson was weak, lacking sorely in both tenacity and creativity. The former enjoyed his best spell at Valencia when he was partnered with the deep-sitting and experienced Dani Parejo, a counterpart the likes of he hasn’t had at Everton since Idrissa Gueye departed for Paris Saint-Germain last summer. The latter doesn’t look comfortable in the centre of the park, and was shunted out to the left side in the second half.

The visiting side’s problems mounted when Mason Holgate, a standout performer this season, injured himself in a robust challenge on Lo Celso shortly after Spurs had taken the lead. He came off for Yerry Mina, leaving his team short of a left-sided central defender and a confident and progressive player to bring the ball out from the back, something Holgate has excelled at this term.

Richarlison had possibly Everton’s best chance just before half-time, when he sent a powerfully-struck effort from outside the box just wide. It was an opportunity that inadvertently sparked conflict in the Spurs ranks, when Hugo Lloris, enraged by Son Heung-min’s decision not to track back in the lead-up, had to be held back from the Korean as both sides returned to their dressing rooms for the break.

Lloris making sure Lo Celso stays between him and Son here. pic.twitter.com/c7Tpyd3tFd

Everton academy graduate Anthony Gordon came on for the ineffectual Alex Iwobi at half-time and offered a clear improvement, running at Spurs and showing a greater degree of aggression, but couldn’t pull his team back into the game. Son, perhaps buoyed by the half-time fracas, tested Pickford on a number of occasions but likewise couldn’t put the game to bed.

Mourinho will take the three points and casted a positive light on the half-time incident in his post-match interview, but Spurs fans will have little cause for optimism on the back of an uninspiring victory. Ancelotti was typically calm and collected, but will be under no illusion that significant strengthening will be needed to turn his team into a genuine force.

Loading...
Newer Post
Gabriel Barbosa – Will The Star Of South America Return To Europe?
Older Post
Kevin Ratcliffe On Playing For Wales & The Influence Of Howard Kendall At Everton