Five years ago, on the 4th July, Chile ended their 99-year long wait for silverware by beating neighbours and tournament favourites Argentina in the final on penalties. Our South American Editor Adam Brandon was present in the stands behind the goal in the Estadio Nacional, Santiago that day and has unearthed his photos from that glorious day for Chilean football:

Most fans arrived to the match at least one hour before kick off to soak up the atmosphere and to ensure their spot in the stands. 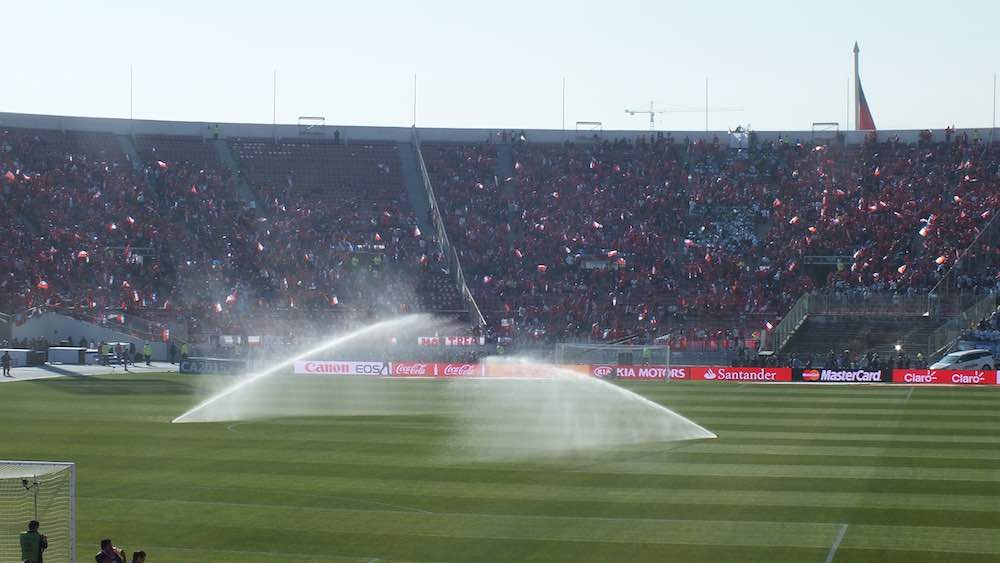 Atmosphere builds as kick-off approaches, Chilean flags were placed on every seat for supporters to wave. 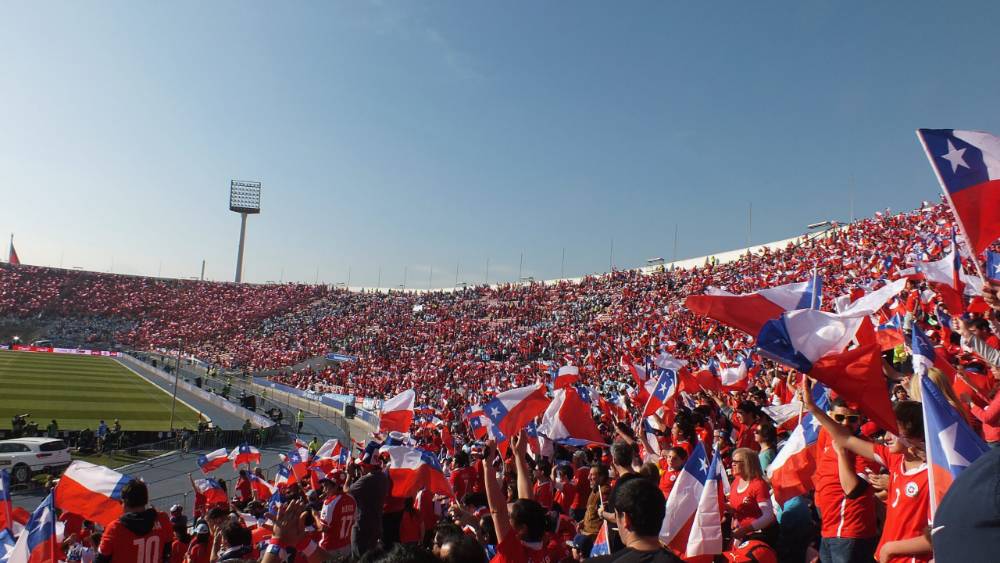 A small contingent of Argentina supporters were doing their best to make themselves heard. 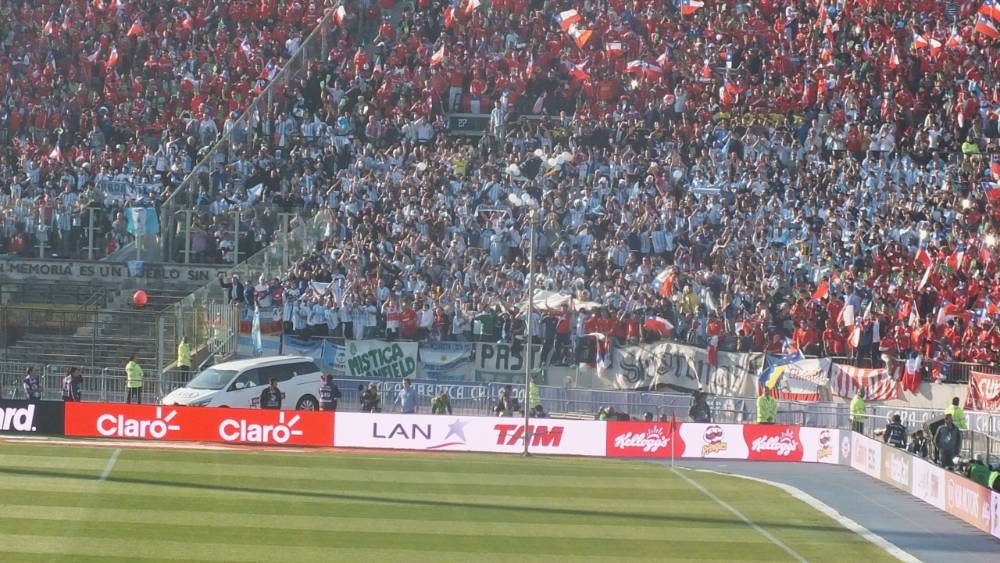 The teams line-up for a minute’s silence for Carlo de Gavardo, a Chilean motorsport star who had died of a sudden cardiac arrest the previous day. 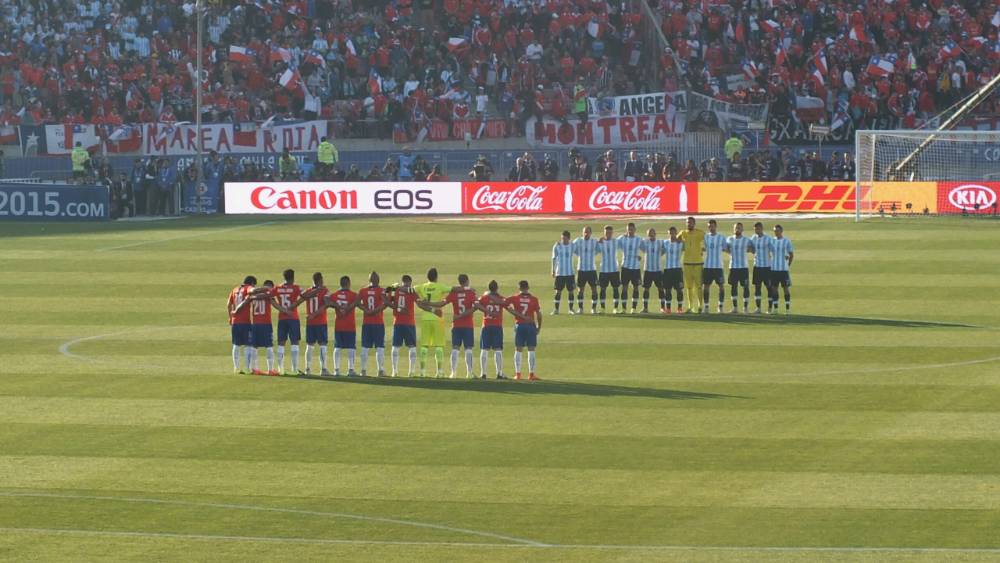 Chilean playmaker Jorge ValdÍvÍa goes through his final warm-up exercises as Ángel Di MarÍa looks for the ball to kick-off. 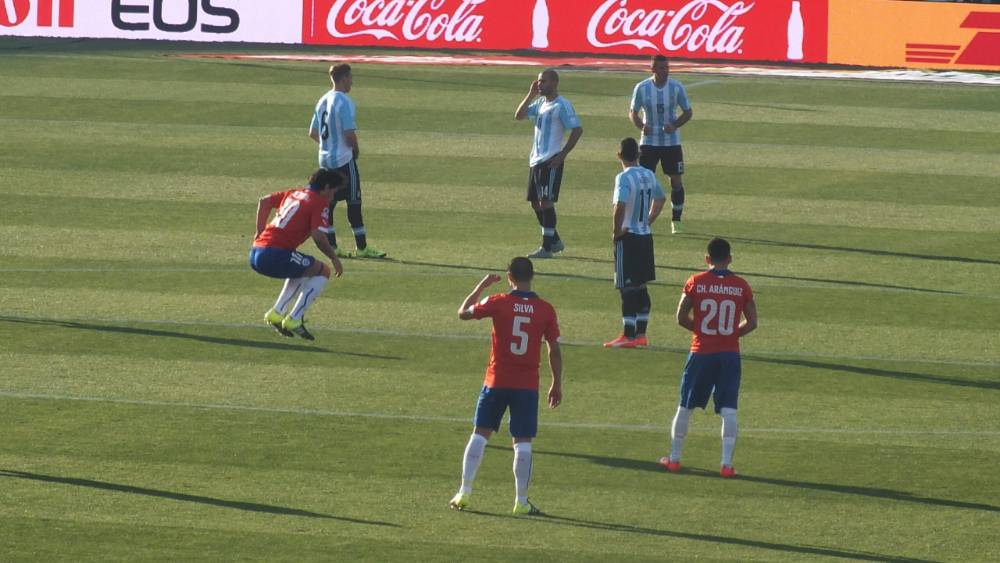 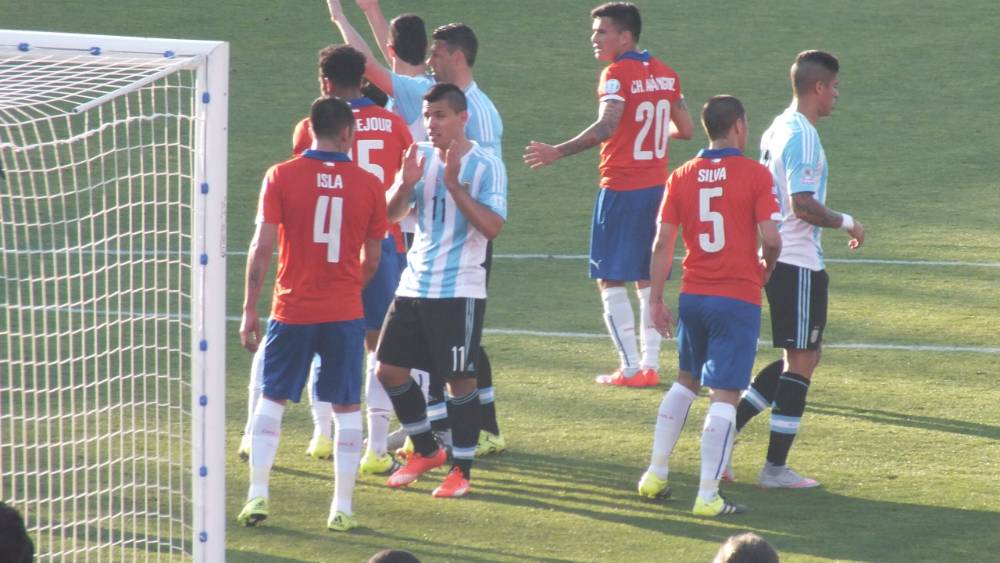 Claudio Bravo watches the ball loop over him and the bar as Argentina press for an opener. 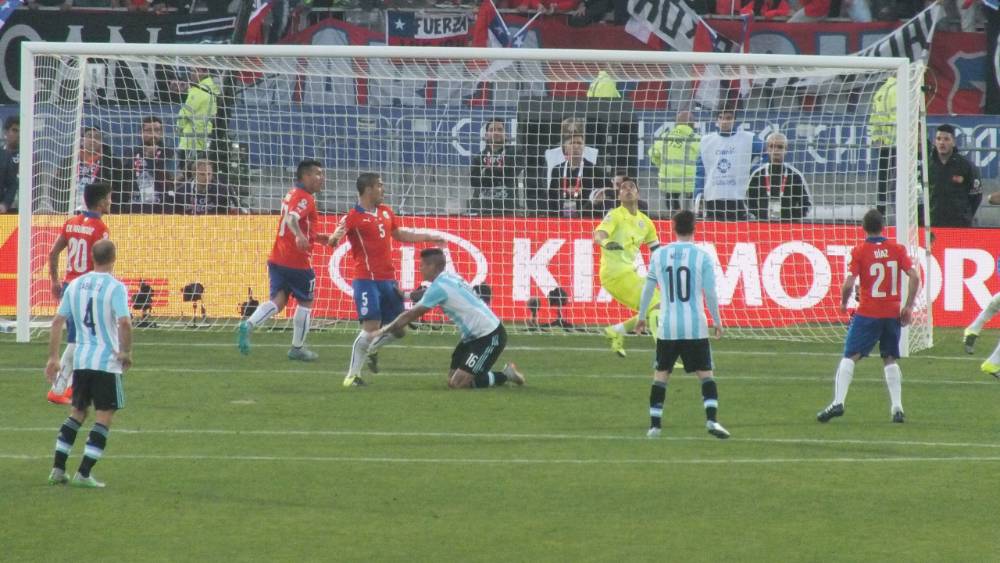 Lionel Messi lines up a free-kick. The greatest player in the world was well shackled by Chile in this final. 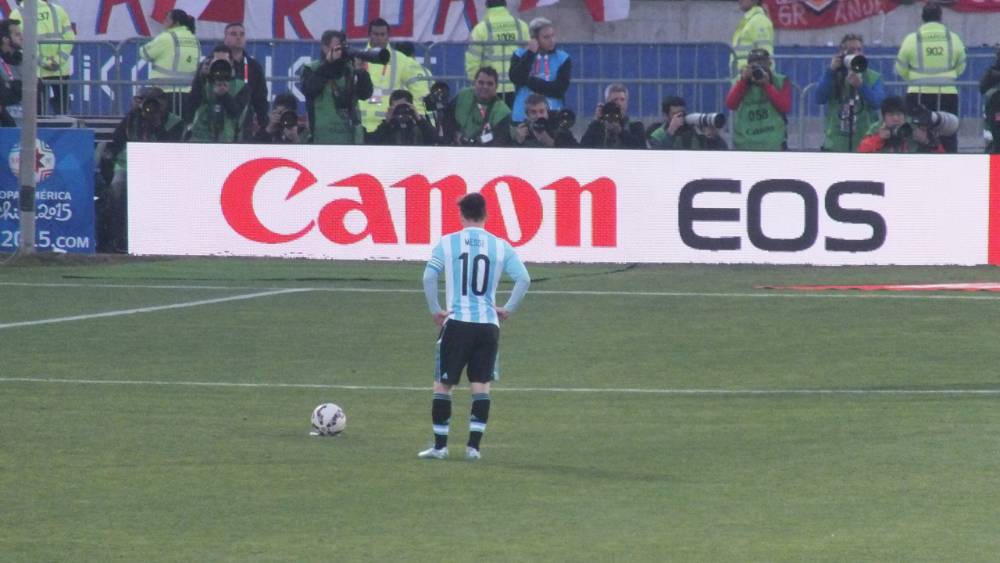 After 120 minutes, the two finalists could not be separated. Chile had more possession and shots, but Argentina had the best chance of the game on the counter attack in the final minute of normal time when Gonzalo Higuaín couldn’t quite convert from close range. After a tense extra-time, the final was to be decided on penalties. 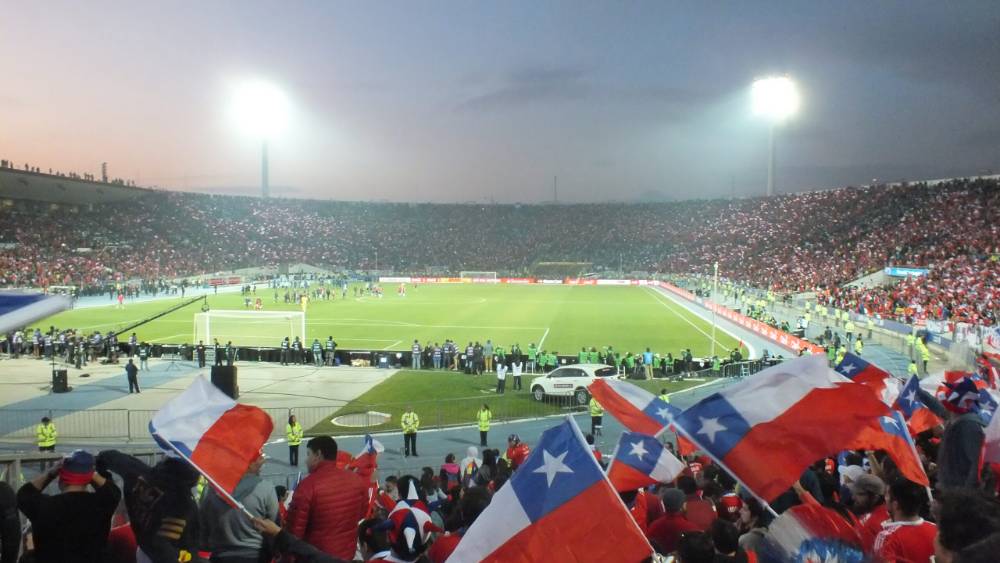 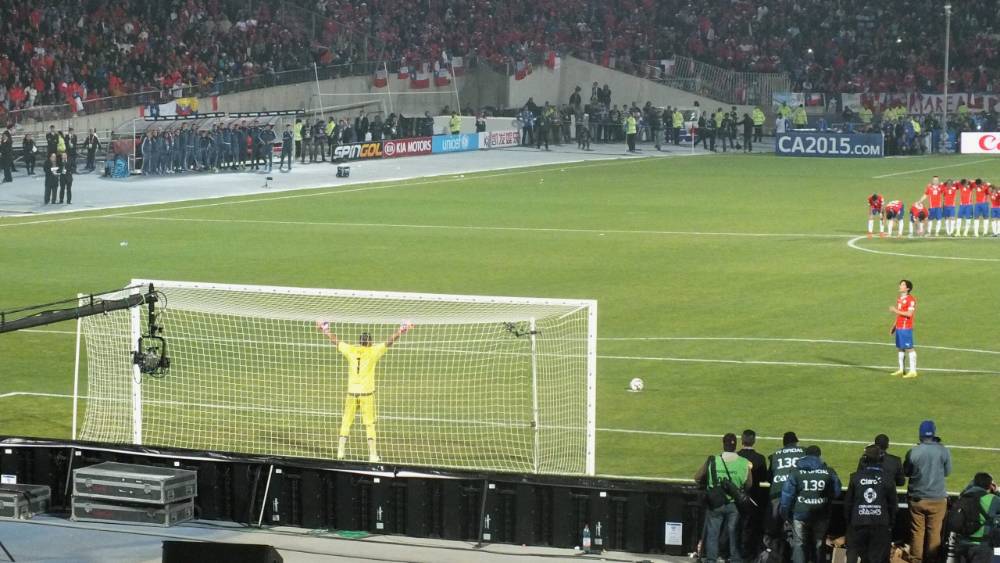 Fernández’s technique is perfect and the ball finds the top corner to give Chile the lead. 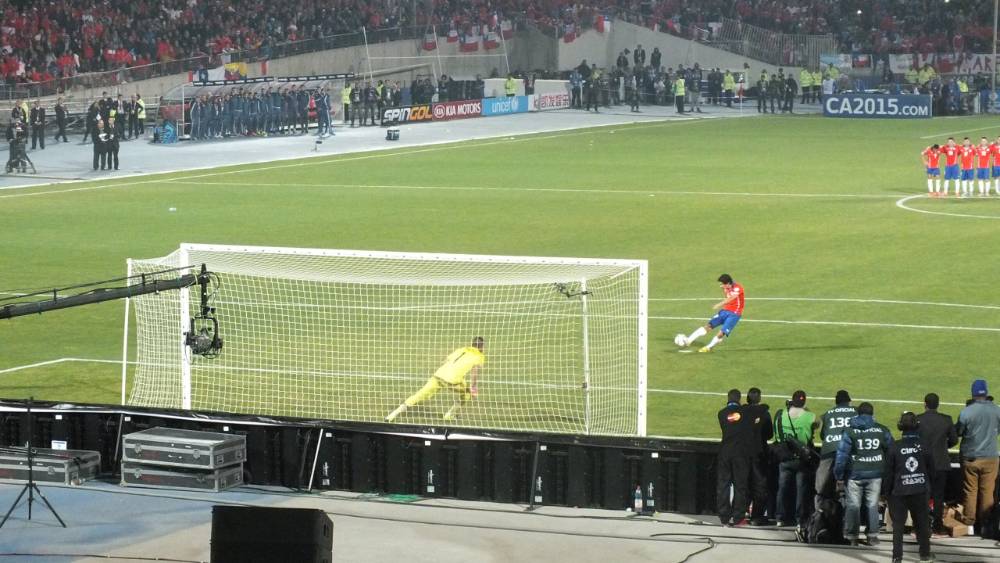 Lionel Messi replies for Argentina, Claudio Bravo dives the right way but the ball goes just under him, 1-1. 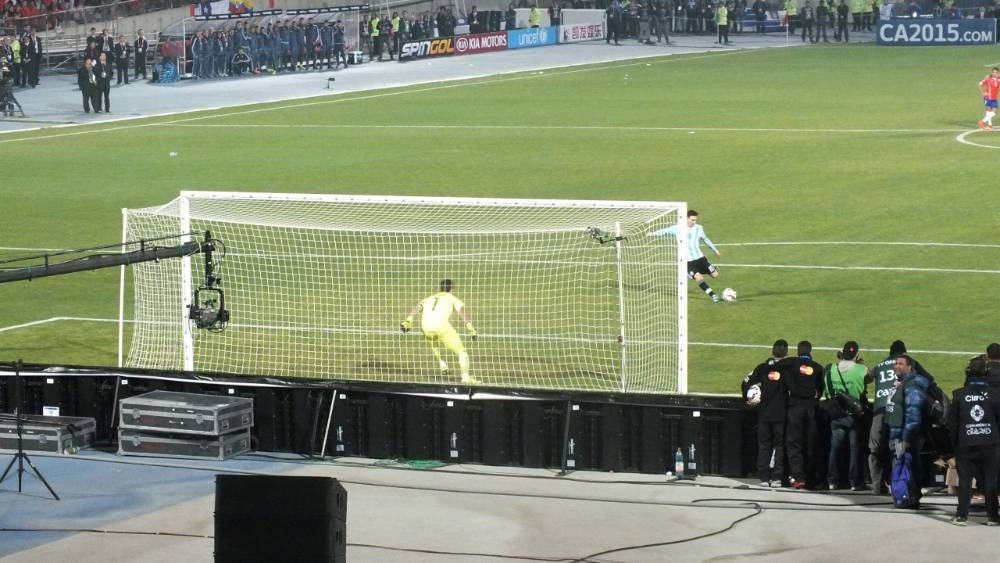 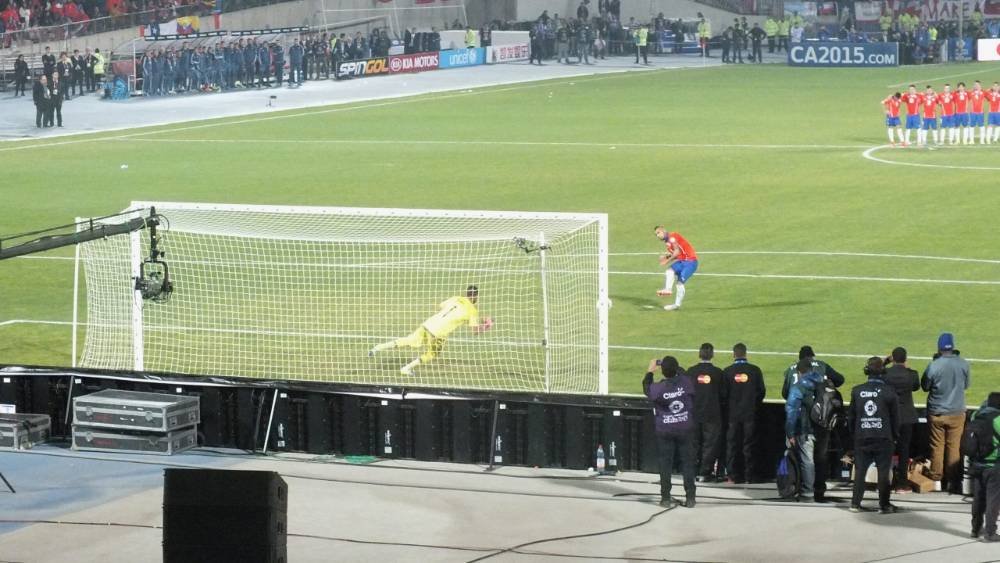 Gonzalo HiguaÍn blasts his penalty over the bar to hand Chile the advantage. 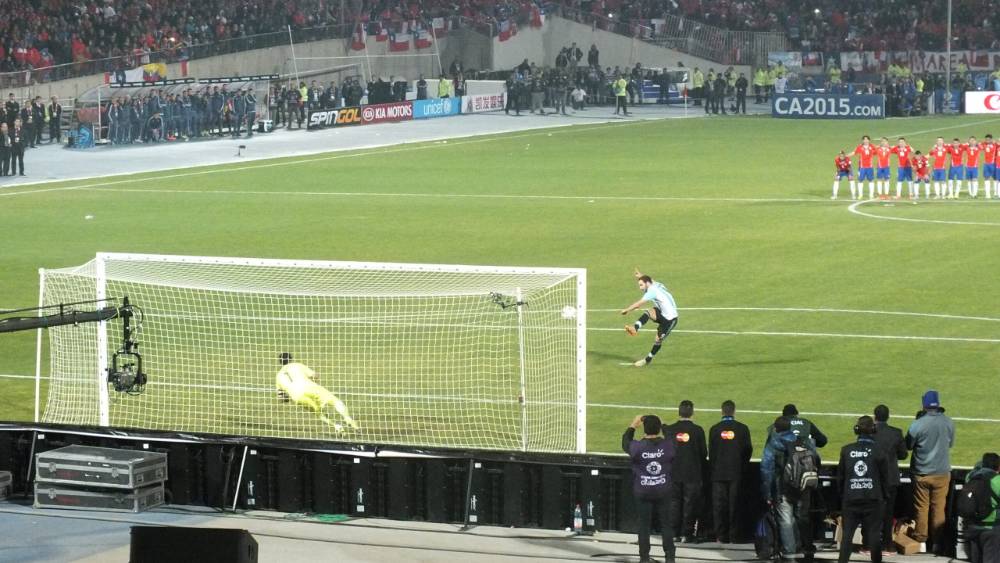 Charles Aránguiz in his trademark style executes his penalty hard and with precision to give Chile a 3-1 lead. Unstoppable. 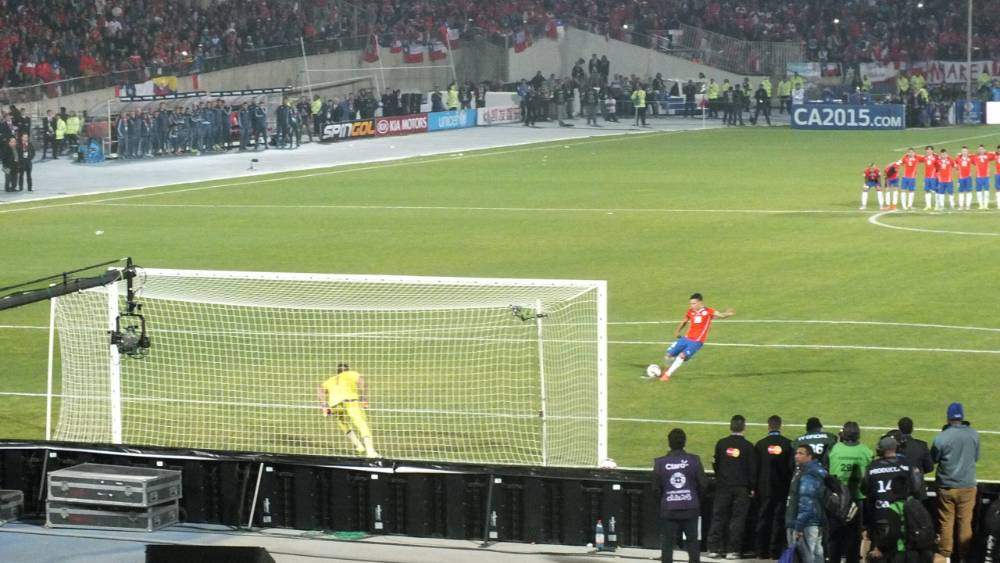 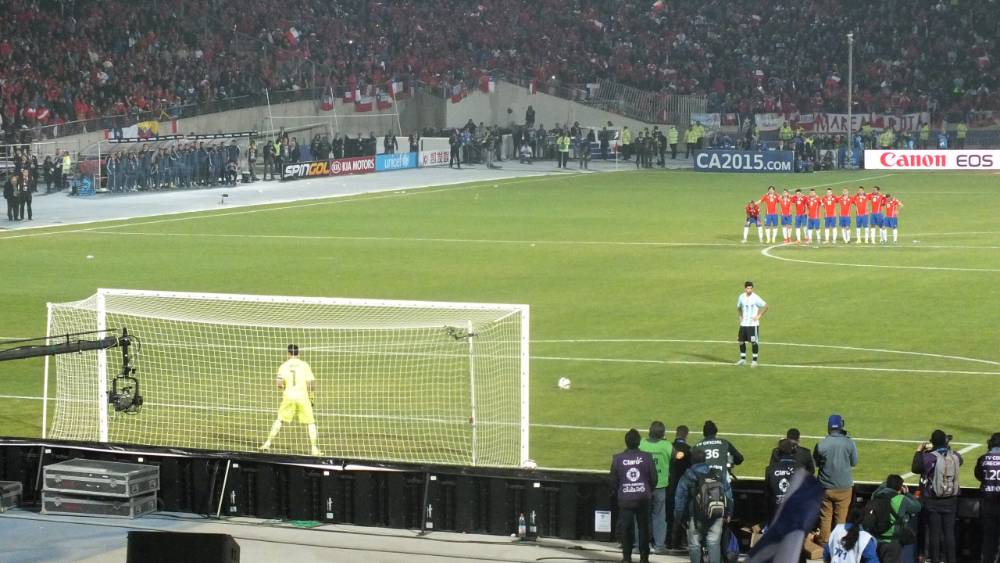 Alexis Sánchez seals the triumph for Chile with a casual Panenka. 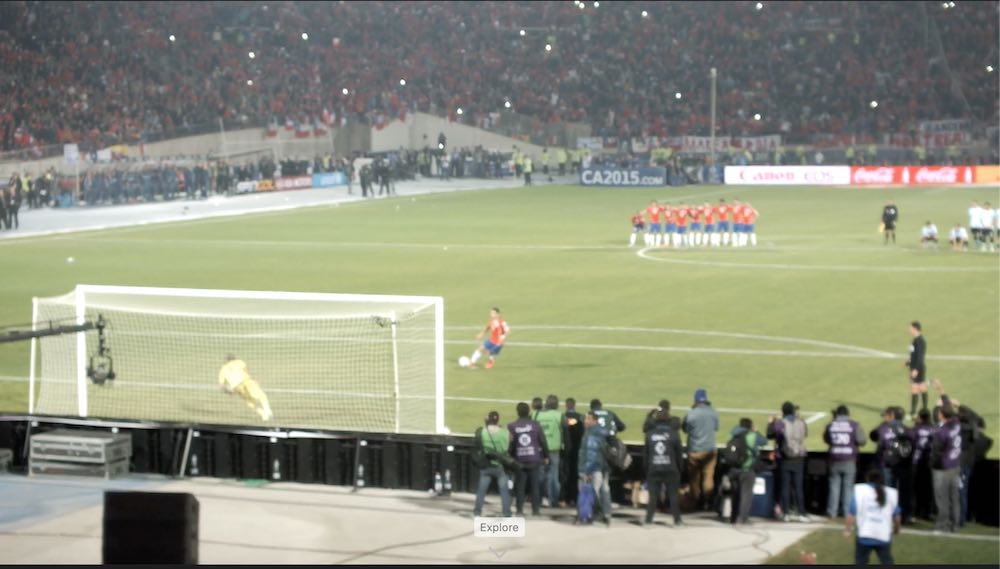 Lionel Messi sits alone and disconsolate as another chance of silverware with his national team goes begging. 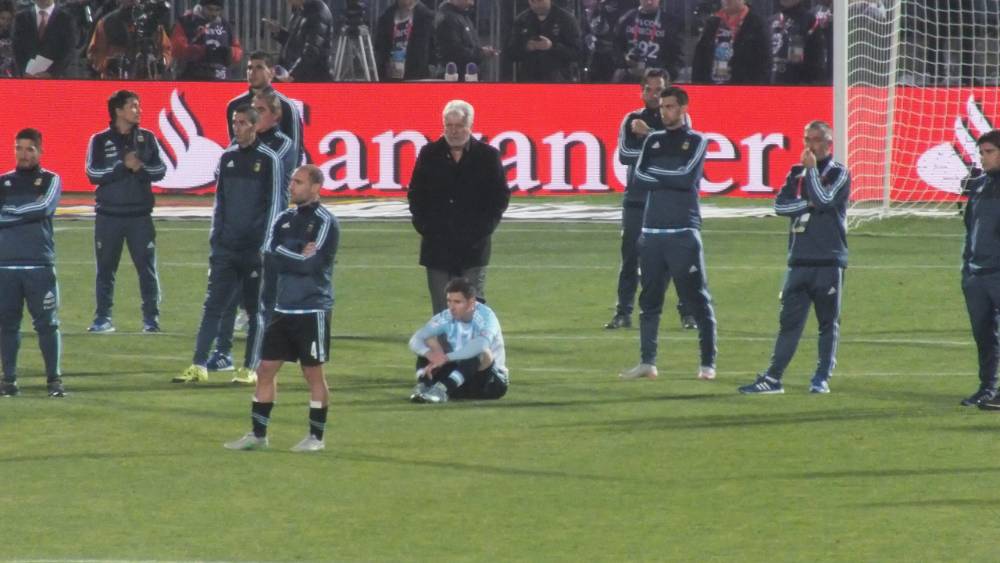 Meanwhile Chile lift the Copa America in front of the VIP seats, their first piece of international silverware after a 99-year wait. 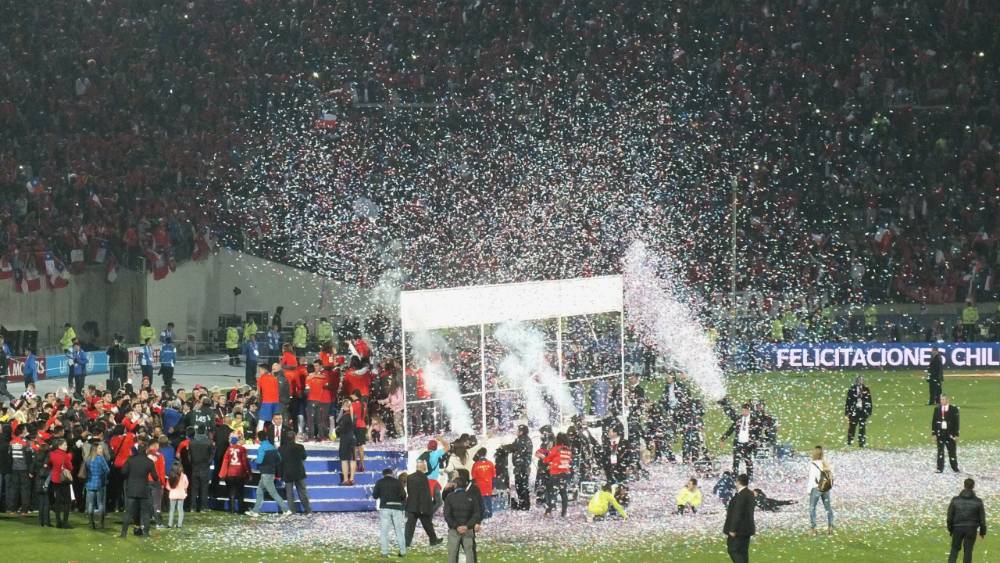 Gonzalo Jara, Gary Medel and Eduardo Vargas celebrate on top of the crossbar with the Copa America trophy. 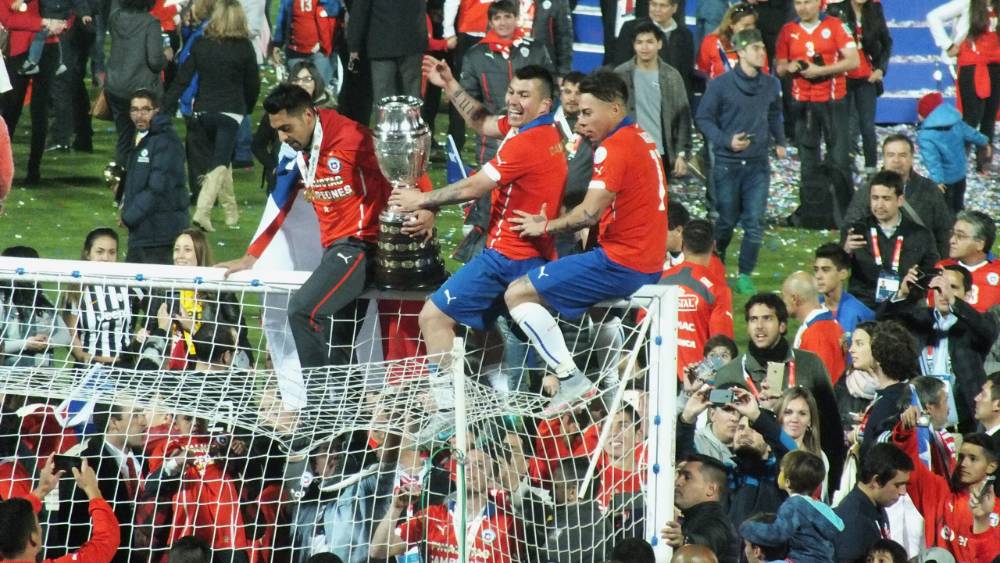 A fireworks display to celebrate and close a successful tournament for the hosts. 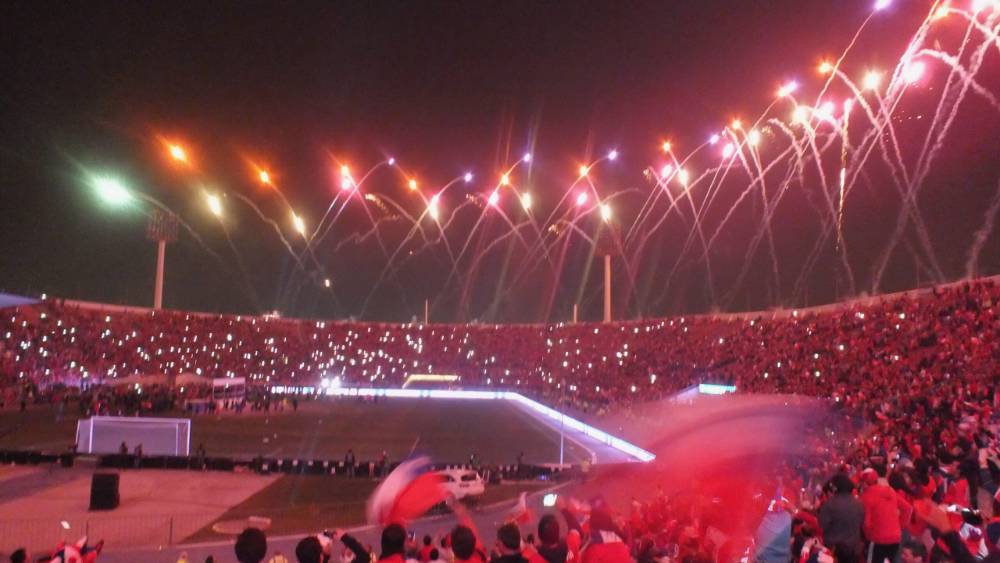 The fireworks add a familiar smog over the Santiago winter skies as fans soak up the final moments of the celebrations. After months of no rain, the air quality in Santiago was so severely poor during the tournament that the authorities had asked people to stop making barbecues. 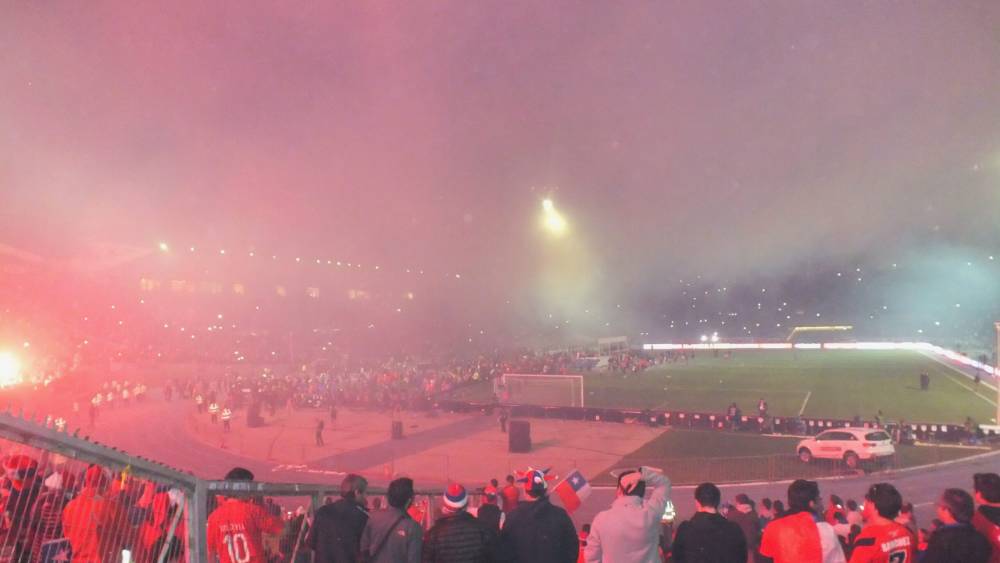 All photos taken by Adam Brandon.