Wolves In The 90s: A Tale Of Recurring Frustration 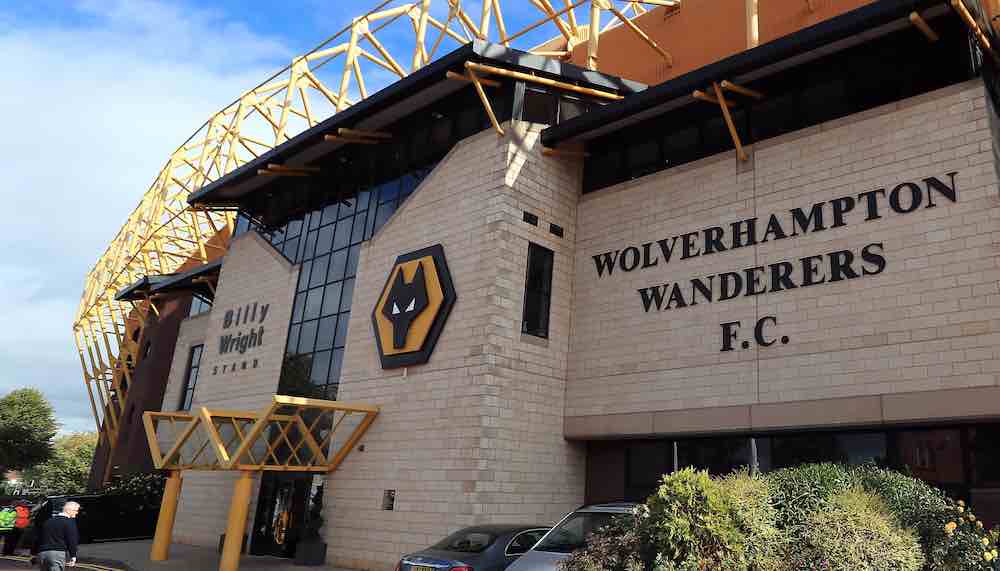 Young Wolves fans today are blessed. They walk towards Molineux on a Saturday afternoon safe in the knowledge that they will see their team attack with pace, play some attractive football, and probably win, in all likelihood. At least that is how Nuno Espirito Santos’ reign in the Midlands has panned out so far.

They are fortunate to support a side that has achieved its objectives in most of the past ten seasons.

Those in their teens and early-20s probably do not fully realise just how good they have it, as there has not always been this sense of satisfaction around the club.

They are the generation that were lucky enough to have missed out not just on the club’s well-documented financial troubles of the 1980s, but also the eternal frustration of the 1990s.

Young Wolves have never suffered that feeling of Groundhog Day other generations did, as the same season seemingly plays out on a loop year after year.

In the past ten years, Wolves have certainly had their ups and downs, and were playing in the third tier in 2014. The difference is that the downs were immediately followed by ups.

The 1990s however, were very different.

Just prior to 1990, Wolves had been as low as 16th in Division Four, and suffered the humiliation of being knocked out of the FA Cup by part-time Chorley. 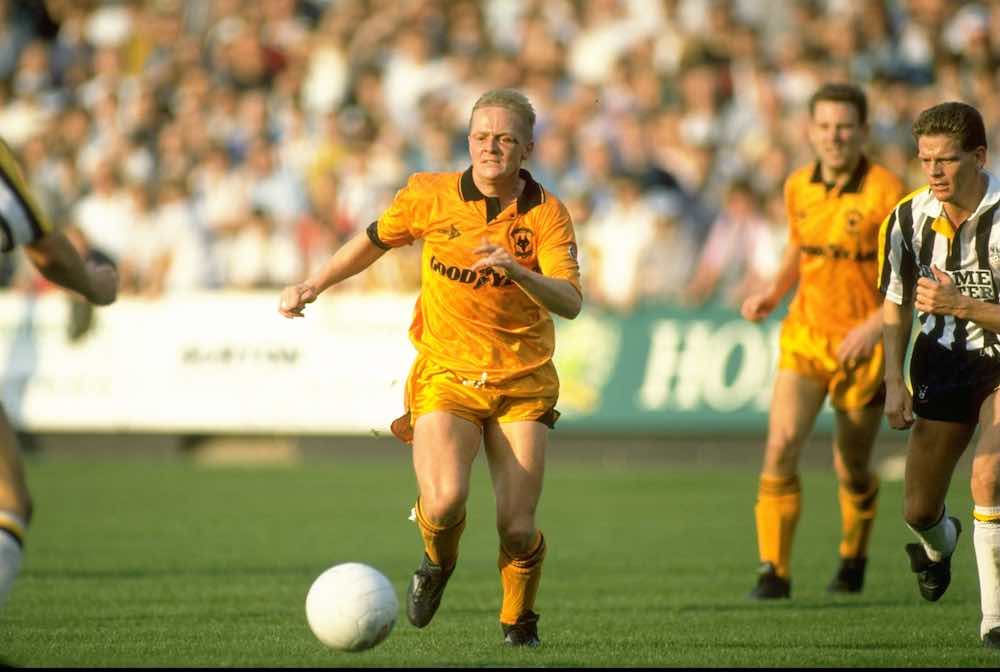 Oct 1990: Keith Downing of Wolverhampton Wanderers in action during a Barclays League Division Two match against Notts County at the County Ground in Nottingham, England. The match ended in a 1-1 draw. Allsport UK/Allsport

By the start of the 90s the worst had passed, both on and off the pitch. Thankfully, Wanderers would no longer have to fear for the survival of their club. Very different challenges awaited.

Things had gone full circle in Wolverhampton as the team were now owned by millionaire Sir Jack Hayward, the club’s modern-day saviour. Just several years after coming perilously close to bankruptcy, funds were suddenly plentiful. There was a sense of revival around the club, both internally and externally.

During the early 90s, Molineux was completely redeveloped. Wolves had gone from playing in a decaying provincial stadium, to a shiny new one that was amongst the finest in the UK when it was completed.

Molineux was one of the first in the revolution of new stadia that swept England just before and after the turn of the new millennium. A few short years after it reopened, old grounds like Burnden Park, Roker Park, the Baseball Ground and Filbert Street were all razed to the ground as brand new stadiums were built in their place to bring in the 21st century.

This was a watershed moment for Wolves. They had been reborn after the most traumatic decade in their 100-year history.

The fans now believed they had everything to be a Premier League club. They had the ground, the fans, the history, the chairman, and above all, the budget. It felt like it was all about to peak gloriously in the coming months and years.

No one was to know at the time that it was a false dawn.

Around the time of 1994, Wolves were a sort of Division One (modern day Championship) version of what Chelsea would become ten years later, outspending their closest rivals comfortably.

They were able to bring in a constant string of attacking players for £1m to £1.5m each, which, for the benefit of younger readers, counted as serious investment in the second tier 25 years ago. 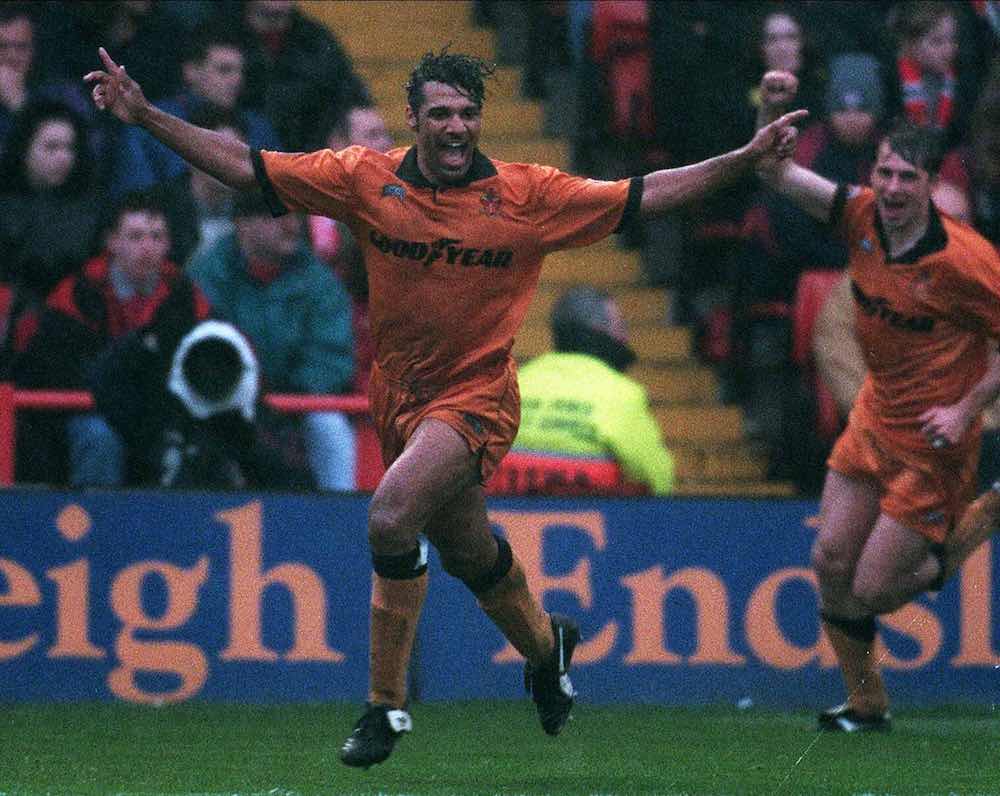 When the 1994/95 season got underway, the stage was set for Wolves to return to the top flight. Sir Jack had put together a squad that included Steve Bull, David Kelly, Don Goodman, Steve Froggatt, and Tony Daley. In theory, rival defences would not be able to handle that attacking force.

It’s worth emphasising that listing those names in the Division One of the mid-90s was the equivalent of reading aloud Liverpool or Manchester City’s attacking riches today, taking into account the context.

In defence, they were also able to pull off a stunning coup by adding the experience of Feyenoord legend John De Wolf at centre-back.

To add to that, they had an ex-England manger presiding over all that talent- Graham Taylor.

After a long and exciting season, May 1995 did turn out to be a turning point for Wolves, but not in the way anyone there had hoped for.

Instead of being the launchpad for a glorious new era in the Premiership, 1994/95 was the beginning of what felt like endless frustration for Wolverhampton Wanderers.

The team had a decent campaign, but with the Premiership reducing in size from 22 to 20 teams that year, only one automatic promotion slot was up for grabs.

Middlesborough clinched it, forcing Reading, Bolton, Wolves, and Tranmere into the arduous play-offs.

It was in the fateful play-off semi-final versus Bolton that Wolves suffered their first heartbreak of Sir Jack’s era.

Despite a 2-1 win in the home leg, Wolves lost away 2-0 and the squad of relative superstars missed out on promotion.

Close, but no cigar.

Still, the bulk of the talent stayed together that summer, so theoretically promotion was likely or even inevitable over the coming seasons.

Financially, Sir Jack was bankrolling the Premiership bid from his considerable personal wealth, so Wolves were never obliged to sell on the back of a failed promotion push as another team might have been.

After the next campaign good off to a poor start, Wolves pulled the trigger and replaced Graham Taylor with Mark McGhee, a promising young manager who underwent a messy divorce with Leicester to be able to take charge at Molineux in late 1995. 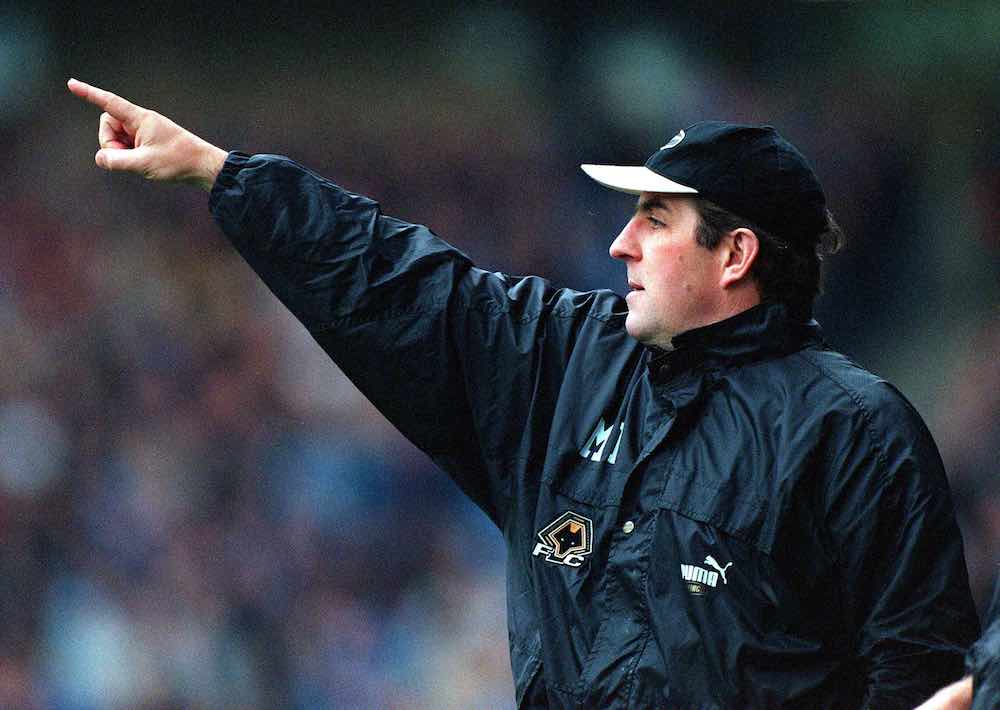 Things like this stoked to the fans’ conviction that Wolves were a “big club”, a Premier League club just playing in the wrong division.

This sentiment led to people externally viewing Wolves as arrogant or deluded. It seemed as though the rest of the division took delight in their suffering.

In Wolves’ defence, they did have the biggest chequebook, nicest stadium, as well as some of the biggest attendances in the second tier. Crowds always topped a noisy 25,000 for home games in that era.

Furthermore, for those managers who were never going to get a call from Liverpool or Man United, the thought of leading Wolverhampton Wanderers back into the top tier was an attractive option.

Once McGhee had turned the team around and got them fit to fight for a top spot again, it was the start of 1996/97 season.

Yet again, optimism filled the air in the Black Country that summer. On a national level, football fans were coming down from the euphoria of Euro 96. At a local level, it felt like Wolves had all the ingredients they needed to secure a return to the top flight after a 13-year period that saw them play in all four divisions and nearly go out of business.

One of the great ironies of that decade is that being a Wolves fan and an England fan went hand in hand. All those “oh so nears” that David Baddiel sang about in reference to the Three Lions could quite easily have been about the Wanderers.

Predictably, the 1996/97 season ended with a familiar story. Barnsley finished second behind a rampant Bolton, and Wolves were again condemned to the dreaded play-offs, where they lost the semi-final.

Crystal Palace is the name that will forever bring back that particular set of bad memories for Wolves fans, who were again left with the bitter taste of seeing clubs with much smaller budgets and support go up instead of them.

That campaign was as close as Wolves got to the Promised Land before the turn of the century. They continued to bring in established British talent as well as exotic foreign names, but the final few years of the 20th century were spent constantly fighting for a play-off place, and usually missing out to someone like Birmingham City or Derby County on the last day of the season.

After 13 years and 306 goals, Wolves all-time icon had to retire without ever living the dream of taking Wolves up to the Premier League. That is one particular statistic which future glories will never be able to compensate for.

The crushing feeling even extended into the 21st century, as Wolves blew the chance to go up automatically in 2002 and lost a play-off semi-final once more. Norwich City added themselves to the list of names Wolves fans will always have nightmares about.

Only in 2003 was the era of frustration laid to rest once and for all, when Wolves finally won the play-offs at the fourth time of asking, beating Sheffield United in Cardiff.

The feeling of joy and relief was so big it felt like England had won the World Cup to those of us who had witnessed the 90s from the terraces.

“Frustration” is a word that we keep repeating in this article, but there really is no other word that sums up the Molineux faithful’s memories of that time so accurately.

Despite all that hope, all that money, and all those attempts, Wolves never made it to the Premier League in the 90s. How frustrating.