Orlando City 2-1 Inter Miami: Nani Rolls Back the Years in MLS is Back Opener 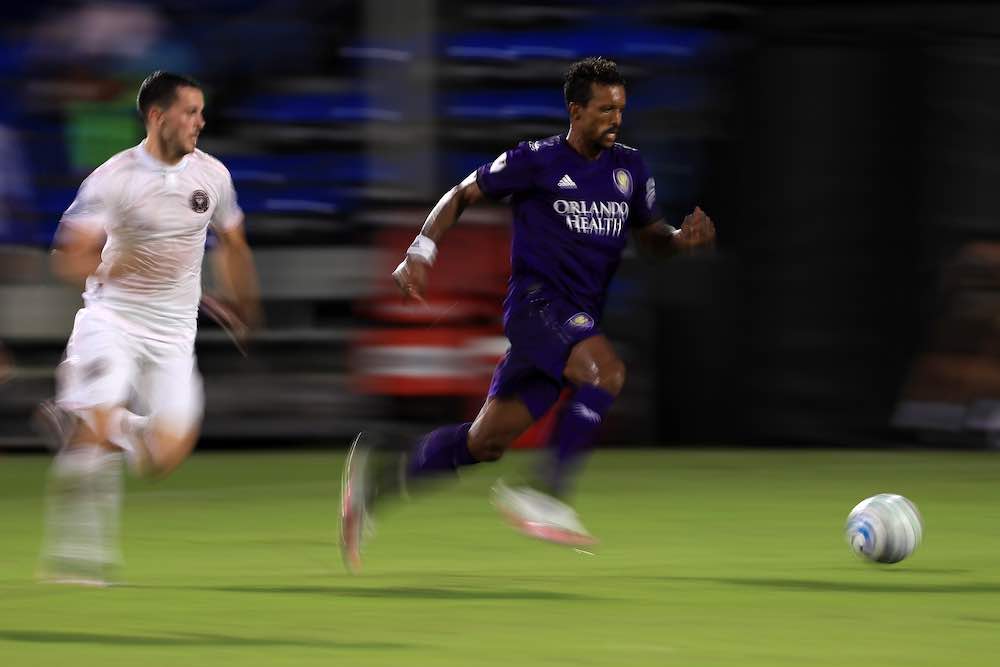 The MLS is Back tournament kicked off on Wednesday evening as Orlando City beat Inter Miami 2-1 at the ESPN Wide World of Sports Complex.

Before the game kicked off, a powerful tribute was paid to the Black Lives Matter movement as players from across the league stood in solidarity with Black Players For Change group which aims to bring more inclusion to MLS and beyond.

Once the game got underway, both Florida rivals missed big chances in a goalless first half but after the break, Inter Miami quickly took the lead through Colombian forward Juan Agudelo.

However, it was a lead Diego Alonso’s men couldn’t hold as Chris Mueller converted a Nani cross before the Portuguese winger went from provider to scorer, firing home a winner in the seventh minute of second-half stoppage time.

Missed chances, wild performances and late goals — MLS is well and truly back. So, what did we learn from the match?

The Florida derby, the Turnpike derby, El Tropico. What the hell are we to call this brand new rivalry in MLS? Whatever we come to know it as, it’s well and truly underway now.

For all of Orlando’s possession during the first half, the Lions failed to create many clear-cut chances of note, with Chris Mueller’s one-on-one effort — saved by Luis Robles — the pick of a thin bunch.

It was, in fact, Inter Miami creating most of the openings and Agudelo, in particular, looking like a real threat.

The Colombian should have opened his Miami account within the opening 10 minutes but sliced an effort wide from inside the six-yard box after some excellent work by Matias Pellegrini down the left flank. Agudelo also fired an effort well wide from the halfway line when he could have had a free run at Pedro Gallese’s goal after dispossessing Robin Jansson.

But Agudelo wasn’t to be trodden down and just moments after half-time, the 27-year-old had the honour of scoring the first goal of this brand new rivalry and the MLS is Back tournament, poking home a powerful Victor Ulloa delivery in a similar position he’d missed from earlier in the game.

It wasn’t a winning goal, but it’s one that will certainly go down in history as this match-up develops in the coming years.

2. Dwyer’s Enthusiasm Gets The Better Of Him

We’re all aware of just how physical a player Dom Dwyer is and having spent months on the sidelines, it should come as no surprise that he was eager to make an impression on Wednesday. However, what started as something of a “bull in a china shop” performance quickly descended into madness and an incredibly unfortunate and harrowing injury.

Dom Dwyer has already committed 3 fouls and fell over the ball going for a rebound. MLS really is back! #MLSisBack #OrlandoCity #InterMiamiCF

During the first half, Dwyer could be seen charging around the Inter Miami half, getting stuck into defenders and committing no fewer than four fouls in the opening 25 minutes alone, while he also managed to fall over the ball when going for a rebounded Mueller effort.

In the second half, Dwyer’s enthusiasm got the better of him and when jumping for an aerial duel with Andres Reyes, the striker caught his opponent in the neck, leaving the Colombian defender in clear pain and distress.

Reyes was eventually stretchered off while a visibly shaken Dwyer was withdrawn by Oscar Pareja. You can only hope the injury isn’t too serious.

Miami right-back Dylan Nealis should have been walking away from this match with widespread praise and plaudits for what was a largely fantastic performance.

The 21-year-old went toe-to-toe with former Manchester United winger Nani and for large parts of the game, kept the Portugal international firmly in his pocket.

However, there’s a reason Nani is a Designated Player and one of the most renowned players in Major League Soccer right now. During the second half, he demonstrated that perfectly.

On 70 minutes, the 33-year-old squared up one-on-one with Nealis on the left and, rolling back the years, tore down the outside before delivering a wonderful ball across the Miami six-yard box. Mueller was on hand to fire home at the far post, levelling the scores and getting Orlando back on track.

And deep into second-half stoppage time, Nani stepped up once again, firing home a later winner from close range after Nicolas Figal failed to deal with a Joao Moutinho cross.

Pareja faces a real test to turn this Orlando City side from bottom-dwellers to Playoff contenders and it’s moments like these from Nani that could make all the difference during MLS is Back and the rest of the season thereafter.

Loading...
Newer Post
Aston Villa’s Decline From England’s Elite
Older Post
No Vela, No Problem: Why It Would Be Foolish To Rule LAFC Out Of MLS Is Back Tournament