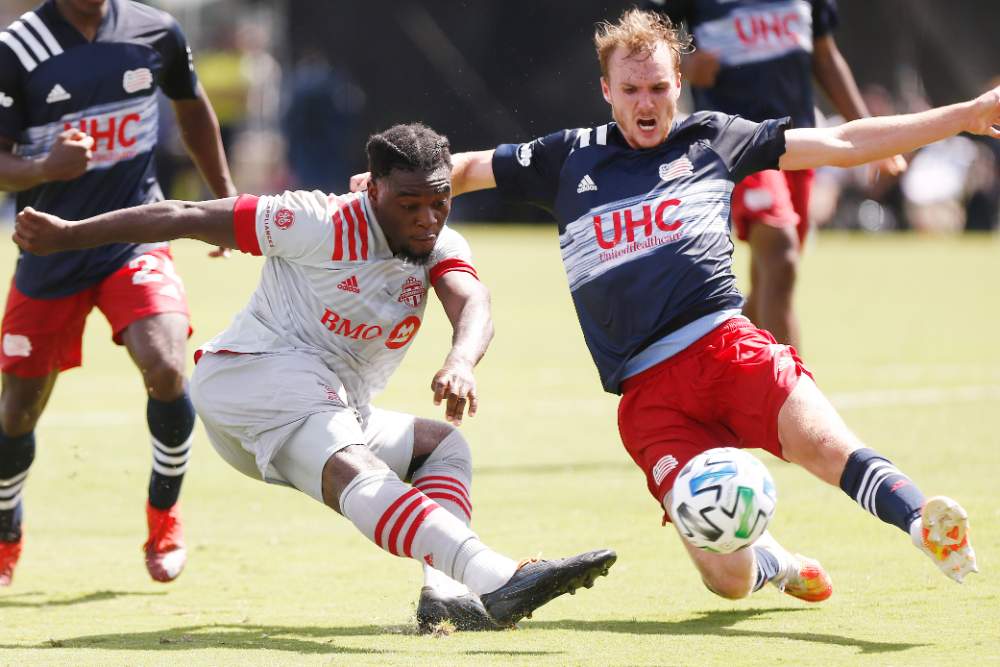 With a win enough for either side to claim top spot in Group C, both Toronto FC and the New England Revolution failed to capitalize on the opportunity, playing to a 0-0 draw on Tuesday morning.

Neither side took command of the match in the early stages with chances far and few between in the first half-hour.

TFC failed to get Michael Bradley and Alejandro Pozuelo on the ball as much as they’d like, although Bruce Arena and the Revs deserve credit for their tactics.

As has been the case all tournament for the Reds, Ayo Akinola was lively and got in behind the NE backline on several occasions but didn’t demonstrate the finishing prowess that has earned him so much praise the past week.

New England looked the better side as the game went on, with their best chance coming in the 74th minute when Adam Buksa failed to beat Alex Bono from point-blank range.

Both sides had legitimate arguments for penalty kicks in the closing minutes. Bradley appeared to come through Gustavo Bou in the TFC area with roughly 10 minutes to play but VAR failed to intervene when the ref waved away any New England arguments.

Referee Jair Maruffo would point to the spot shortly after in the 87th minute when Ayo Akinola appeared to be taken down in the box. This time, VAR would be involved and determined the foul took place just outside the area.

In the end, both teams settled for a single point in a somewhat uneventful afternoon. What did we learn in the process?

Since Quentin Westberg joined the Reds ahead of the 2019 season, starts have been few and far between for American goalkeeper Alex Bono.

May 8th, 2019 was the last time Bono started a match for TFC in Major League Soccer, losing 2-0 on the road to Atlanta United some 14 months ago.

The former Syracuse Orange keeper rewarded head coach Greg Vanney’s gamble to give him a game after such a long layover with a strong performance against the Revs.

The two shots on goal he faced in this one tell but half the story as the Reds ‘keeper was plenty busy, particularly in the second half, with no intervention more important than his stop on Buksa to preserve the point.

Westberg’s consistency has made opportunities for the now second-string keeper hard to come by in recent times. Having won the 2017 MLS Cup as the Reds’ first-choice at just 23, many in North American soccer circles had Bono pegged as a real prospect in his position moving forward.

Now 26 years old, Bono still has plenty of years ahead of him for club and potentially country if he can continue the level of play he demonstrated in this one.

Canada continues to make strides as one of the exciting soccer nations in the CONCACAF region.

On Tuesday, two up and coming talents from north of the border were awarded a fifth career start and a first career MLS appearance respectively as Tajon Buchanan played 90 minutes for New England, while Noble Okello came on in the 68th minute for his first league appearance for TFC.

Buchanan demonstrated all sorts of pace on the flank for the Revs giving Toronto’s backline a headache all game. The Brampton native has yet to be capped for Canada at the senior level but was expected to be a part of their under-23 Olympic qualifying roster before the games were pushed to next summer.

If the 21-year-old attacker can continue to get opportunities in Arena’s preferred lineup, expect John Herdman and the rest of Canada’s coaching staff to keep close tabs on his progress in the near future.

Turning 20 yesterday, Okello has picked up two caps for his country, making a pair of substitute appearances in friendlies earlier this year.

The towering midfielder clearly has the attention of the national program but will need to find more meaningful minutes with his club to have a legitimate chance of becoming a regular call-up for Canada.

Supporters on both sides will now have a close eye on Tuesday night’s match between the Montreal Impact and D.C. United.

If the Black and Red can top the Impact by two or more goals in Group C’s final fixture, they’ll surpass both the Reds and the Revs in the tournament standings.

For Toronto, the worst they can finish is second in Group C thanks to their superior goals scored total compared to New England. The Revs, however, can still drop to third in the group if D.C. are victorious by two or more goals over Montreal.

Despite starting neither of his team’s opening two MLS is Back matches, the 35-year-old former Columbus Crew man has scored twice in 31 minutes off the bench in two substitute appearances.

In hopes of an easier match-up in the round-of-16, fans of both Toronto and New England will be hoping the Argentine’s late-game heroics come to a halt against Thierry Henry’s Impact.