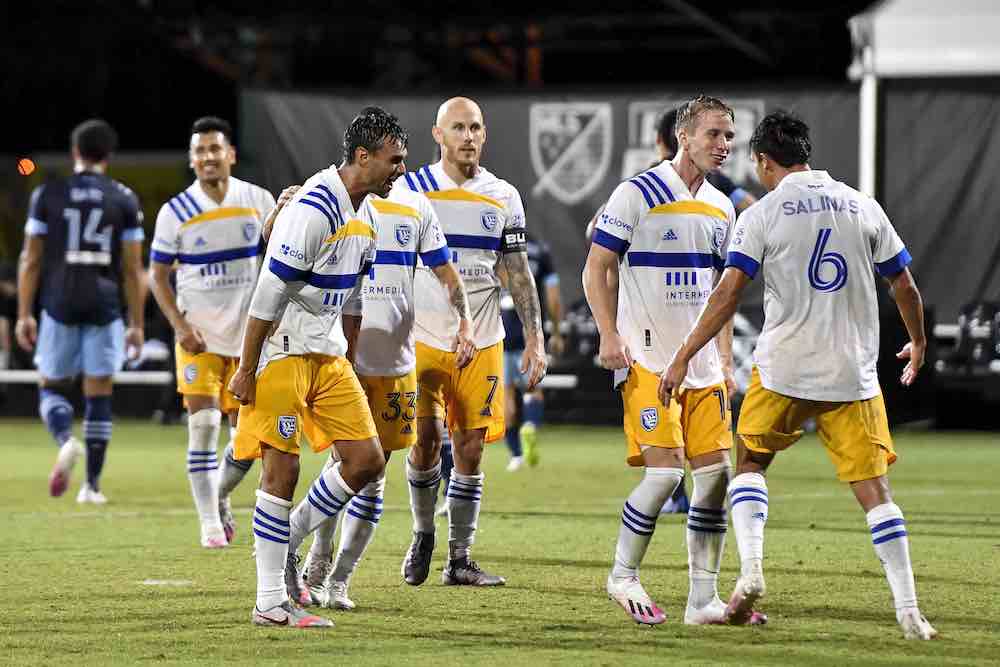 The San Jose Earthquakes claimed their first three points of the MLS is Back Tournament with a 4-3 come-from-behind victory against the Vancouver Whitecaps.

Vancouver started off the game brightly, with left-back Ali Adnan giving the Canadian side the lead ten minutes in thanks to a superb curling strike into the bottom corner.

The lead was doubled 15 minutes later as Peru international Yordy Reyna was released on a breakaway and deflected the ball off of San Jose midfielder Judson for an own goal.

On the stroke of half-time, the Earthquakes found some life in the form of Andy Rios, who flicked in his second career goal against the Whitecaps to make it 2-1 heading into the break.

Both teams started brightly after the break, creating chances at either end, but the Whitecaps high press paid off in the 59th minute as David Milinkovic intercepted a pass from Earthquakes goalkeeper Daniel Vega to set up Colombian winger Cristian Dajome for his first MLS goal.

Desperate for a comeback, San Jose forced their way into the Whitecaps’ penalty area and eventually got their goal through leading marksman Chris Wondolowski, who scored his all-time leading 160th career MLS goal.

Set-pieces were a theme in this one, with San Jose breaking the record for most corners by a team in a single game with 22.

On their record-breaking 21st corner, the Earthquakes equalized through former Chivas defender Oswaldo Alanis, scoring his second goal of the season.

San Jose continued to push forward in the dying moments, leaving Vancouver with no options playing out of the back and forcing the Canadian side to park the bus and eventually caved in as former Whitecap Shea Salinas squeezed the ball past Maxime Crepeau for an incredible 4-3 win.

In what was arguably one of the more entertaining games of the tournament, there were plenty of talking points from both sides which ultimately led to the collapse of the Whitecaps and the three points going the way of the Earthquakes.

These were the starting lineups for each side.

this is the lineup i chose.

if you don’t like it, i don’t care. pic.twitter.com/zoxxbOCRhB

Both Vancouver and San Jose found plenty of success through the high press, forcing numerous key turnovers leading to many goalscoring opportunities.

In Vancouver’s case, their second and third goals wouldn’t have happened without the high press, which is a big part of their system and the way head coach Marc Dos Santos wants his team to play.

The build-up to the own goal came all the way at the other side of the field after a short corner taken by San Jose, where Cristian Dajome dispossessed Judson with a great tackle and sent Reyna through on goal.

Probably not how they drew that one up…

In terms of the third goal, a combination of pressing from midfielder Hwang In-beom, David Milinkovic and Dajome left Earthquakes goalkeeper Vega with little options to build out of the back, forcing the 36-year-old to turn the ball over to Milinkovic and easily creating a glorious goal-scoring chance for Dajome.

As for San Jose, their high press didn’t create as many clear cut goal-scoring opportunities but it helped them to force multiple turnovers from the Whitecaps in midfield.

According to WhoScored.com, the Earthquakes forced the Whitecaps into 24 total losses of possession including 11 interceptions compared to the Canadian side’s 18 and 12 respectively, so it’s clear to see how difficult it was for Vancouver to build any momentum during the game.

This ultimately led to San Jose taking a grip of the game and made the difference in the end, with captain Magnus Eriksson’s 95th-minute tackle giving possession to the Earthquakes in the lead-up to Salinas’ winning goal.

SHEA SALINAS GOES ALL THE WAY!

As mentioned above, the San Jose Earthquakes registered a new record for total corners by one team in a single game with 22 and looked for the most part fairly dangerous from them.

With their high press and aggressive drives forward, the Earthquakes found themselves in good pockets of space out wide after winning the ball back.

However, once Vancouver won the ball back around the corner flag, the Earthquakes covered forward passing options and pressed aggressively which in turn forced the Whitecaps to kick the ball out for a corner.

Despite only scoring twice from them, San Jose looked dangerous every time they were presented the opportunity to whip in-swingers and out-swingers from corners, with Eriksson and Cristian Espinoza combining for two game-changing assists from 18 total deliveries.

Much credit has to go to both midfielders for crossing balls at pace into dangerous areas around the box, as well as Rios and Alanis for taking advantage of Vancouver’s zonal marking.

QUAKES ARE LEVEL ARE YOU SERIOUS

Two bright spots for the Whitecaps in what was a nightmare start to their MLS is Back tournament were the debut starts of centre-back Ranko Veselinovic and midfielder Leonard Owusu.

Despite conceding four goals, Veselinovic showed many of the qualities Dos Santos has talked about in the last couple of months ever since the 20-year-old was signed from Serbian SuperLiga club FK Vojvodina.

“Overall, for his age, for what he could bring and the way he was on the ball, his play overall is very positive,” explained Dos Santos post-match.

The Serbia youth international registered a game-high seven blocks (all of which were in the first half), six clearances, four dribbles, a team-high 39 passes and 10 passes into the final third.

How the Whitecaps created space using the extra man against San Jose’s man for man system first through centre back Ranko Veselinovic and then out wide with left back Ali Adnan who made it 1-0. pic.twitter.com/p0E936o913 #WhitecapsFC

As for Owusu, the Ghanaian midfielder played a big part in driving Vancouver’s game forward and protecting the backline from San Jose’s rampage.

Before going off with what looked to be a bit of an injury in the early moments of stoppage time, the former FC Ashdod man completed three dribbles, made three clearances, three successful tackles and 18 passes going forward.

A big part of Owusu’s success in the match came thanks to Whitecaps captain Russell Teibert, whom Owusu says has helped massively in terms of adjusting to the style of play and a brand new city during a global pandemic.

“Leo’s a great guy, he takes all information on board, he’s open to learning, he’s not afraid to make mistakes,” said Teibert post-match.

“He’s a quality player, he plays a tremendous role in our team offensively and defensively, he’s definitely going to be one to watch.”

Both Veselinovic and Owusu had notably decent performances for the Whitecaps despite the result and will look to continue catching some more eyes during group play.

Up next for the Earthquakes is their final game in Group B against Eastern Conference side Chicago Fire, while the Whitecaps get set for their second game of the tournament against Cascadia Cup rivals Seattle Sounders.