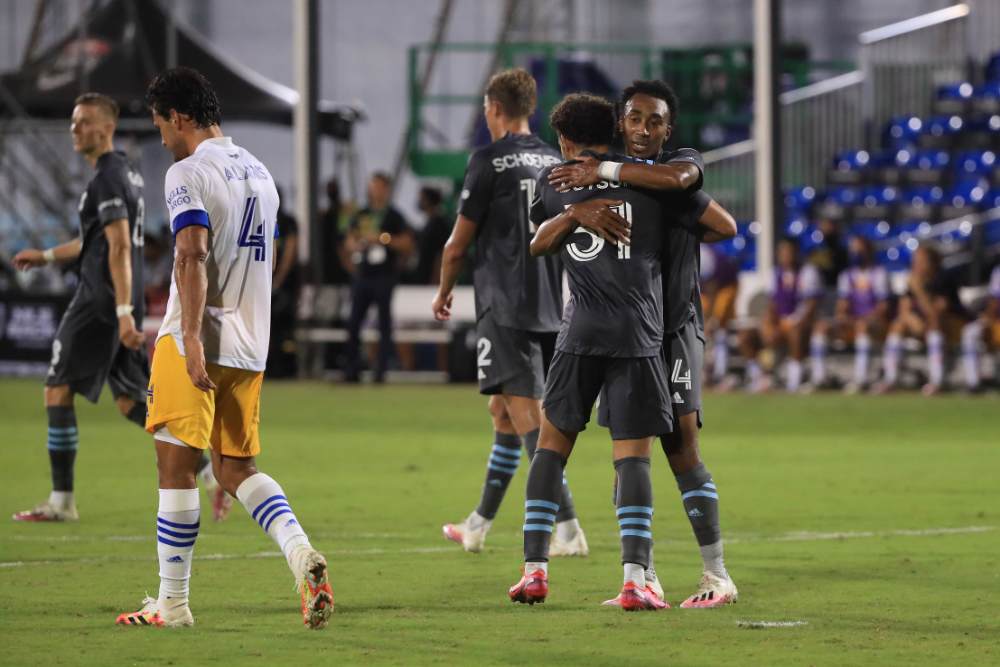 Minnesota United booked a date with Orlando City in the semi-finals of the MLS is Back tournament with a 4-1 win over San Jose Earthquakes on Sunday evening.

The Loons took a quickfire 2-0 lead with two goals in 100 seconds from Robin Lod and Jacori Hayes, capitalising on some shoddy defending from the Quakes.

However, Matias Almeyda’s men managed to claw themselves back into the game after half-time as Magnus Eriksson fired home from the spot after VAR spotted a handball from Hayes stopping a Tommy Thompson dribble in the Minnesota box.

But it wasn’t to be for the Quakes, who just couldn’t sustain enough pressure to truly test Adrian Heath’s side further. Luis Amarilla made it 3-1 with a fine dribble and finish just before the hour-mark to make it safe for Minnesota, while Marlon Hairston finished the job in the final 10 minutes.

So, with the Quakes heading home and the Loons advancing forward, what did we learn from the match?

It may have been Lod, Hayes, Amarilla and Hairston with the goals but Minnesota United fans will quite rightly be paying homage to Hassani Dotson after Sunday night’s win. 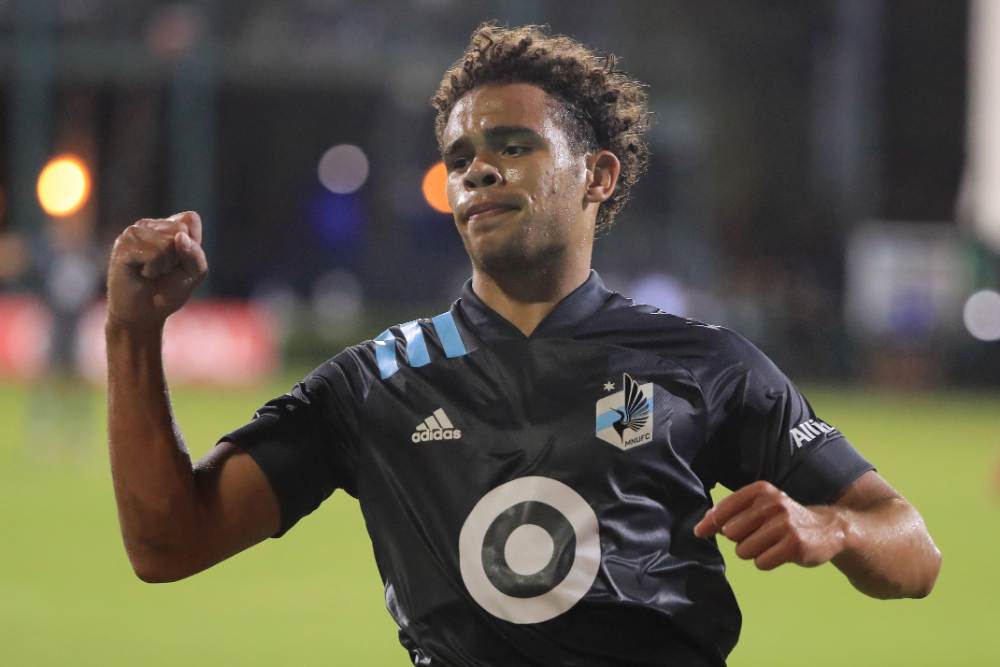 Lining up at right-back, the 22-year-old epitomised everything Heath will have expected from his side against what can often be a dangerous and hard-to-predict San Jose team, charging up and down his flank with seemingly endless reserves of energy.

As can be seen from his heatmap below, Dotson pushed aggressively high to support the Minnesota press and made six interceptions and four tackles on the night, while he also played a key role in keeping his own box safe with four clearances. When he did win the ball back, Dotson used it with calm authority, completing 89% of his passes.

Although Dotson didn’t grab a goal of his own, he was well involved in many of Minnesota’s breakthrough moments, providing the initial cross which led to Lod’s opener and delivering the shot which Daniel Vega pushed into danger for Hayes’ strike shortly after.

And he was finally rewarded with a well-deserved assist in the final few minutes as he broke into the San Jose area and fizzed the ball across the box for Hairston to poke home and complete the job for Heath’s side.

Minnesota face an Orlando City side with an incredibly dangerous left flank in the next round but if Dotson can repeat this performance when that tie comes around, you have to fancy the Loons’ chances.

Full credit must go to Minnesota United for soaking up San Jose possession with real organisation, before breaking quickly and effectively on Sunday night. However, for Almeyda and his squad, the post-mortem will now begin and if things are to improve, it must look inward at their own failings.

What even is San Jose’s shape? 👀🤨 #Quakes74 #MNUFC #MLSisBack

For all their possession and pressure, the Quakes were simply unable to crack Minnesota open to create a meaningful opportunity beyond Eriksson’s penalty — and even that can be categorised as questionable.

However, even more alarming was San Jose’s defensive organisation, or lack thereof.

The Quakes looked at sixes and sevens almost every time Minnesota came forward, with their man-marking system allowing the Loons to easily push a spare man forward to cause overloads, while their set-piece defending left a lot to be desired.

The first three goals San Jose conceded had symptoms of these faults: the first was a reloaded cross where Minnesota’s Jose Aja was easily able to head it across to Lod wide open at the far post, while for the second, Dotson was allowed to cut into the Quakes’ box and shoot with barely a hint of a challenge — Vega didn’t do himself any favours with the save, pushing it right back into trouble.

And for the third goal, Minnesota managed to turn the ball over in midfield before Amarillo picked it up and drew Oswaldo Alanis into a one-on-one battle he was simply never going to win — again, Vega’s goalkeeping wasn’t up to scratch as he got a foot to the effort but allowed it to go beyond him and into the back of the net.

Luis Amarilla takes it himself & puts @MNUFC up 3-1. #SJvMIN pic.twitter.com/irb482wkcf

San Jose conceded the fourth-highest number of goals in the Western Conference during the 2019 regular season and that was ultimately what robbed them of a playoff spot. If they’re to avoid that disappointment once again this time around, you get the feeling Almeyda is going to have to spend some long hours on the training ground tweaking that defensive shape.

Let’s face it, Robin Lod isn’t the most loved player at Minnesota United and to be fair, he’s probably turned in more average performances than positive ones. However, one thing is certain: whenever the Loons play San Jose, Heath must start him. 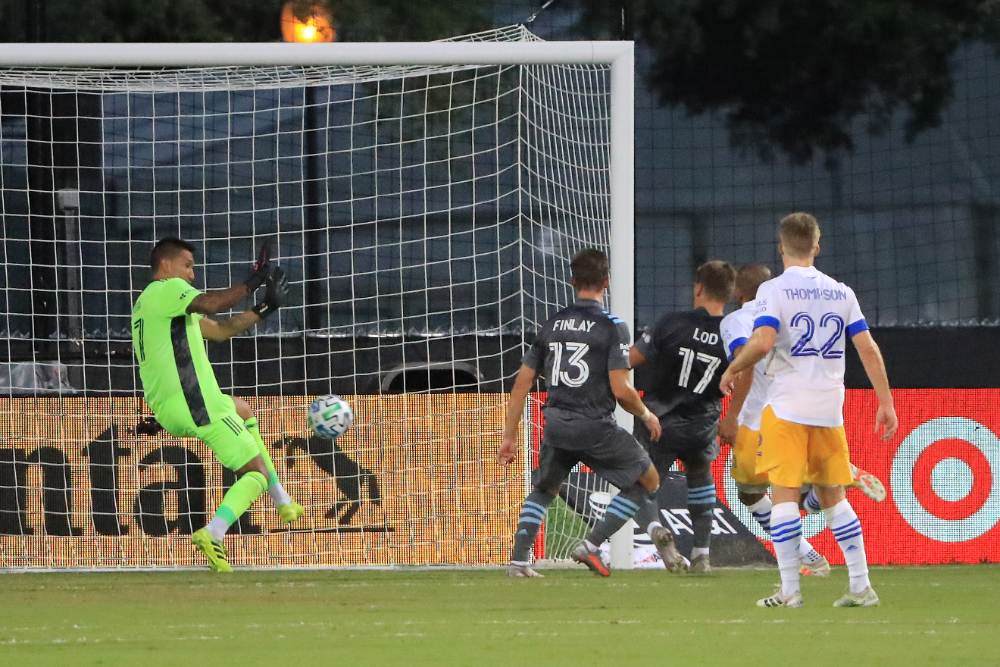 The Finland international netted his first Minnesota goal earlier this season — prior to the suspension of play — against none other than San Jose and after grabbing his second against Columbus last time out to help his side to this stage, he then took his tally to three here, crashing in at the back post to open the scoring in the quarter-final.

Minnesota have scored at least three goals in their last four matches against the Earthquakes — the first time the club has managed that against an opponent in their MLS history. As if the Loons weren’t kryptonite enough for San Jose, Lod seems to save his best for the California side.