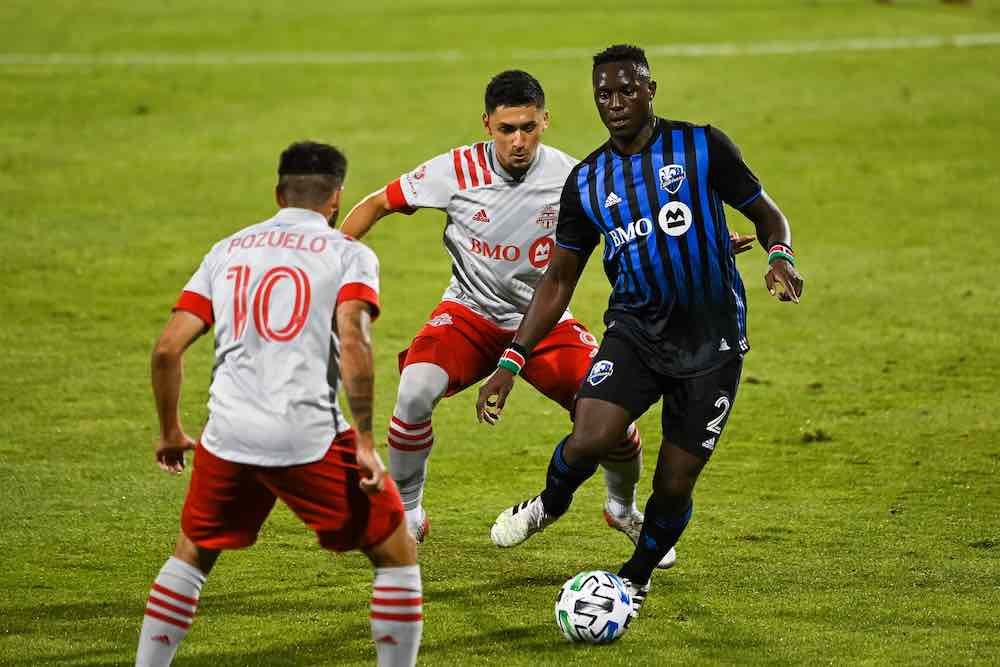 Toronto FC entered their match against Montreal Impact riding a 17-game unbeaten streak which dates back to last August, and a 1-0 win in this Canadian Classique saw them extend that streak, while also extending a winning streak to three games.

The only goal of the game arrived when Toronto were awarded a penalty following an unfortunate moment for Emanuel Maciel as the ball appeared to hit his arm, rather than arm hitting the ball. Alejandro Pozuelo made no mistake from the spot.

Toronto remain the only team in Major League Soccer yet to lose a game this year, and their 18-game unbeaten streak means they are a win or draw away from tying the MLS record.

It’s an impressive record, but one which head coach Greg Vanney finds irrelevant and aims to have his team improving after their win.

“As far as the 18 games, for us its, once again, one game at a time,” he said. “We keep trying to get better and we keeping trying to focus on things we need to improve on.

“Today was a tough one for a lot of different things going on and variables. For us at the end, we just had to lock it down and gut it out a little bit, suffer a little bit at the end but all for the right reasons and to see this one out.

“I didn’t even know that 19 was the number and really is irrelevant. We’re home the next game, try to get the three points and try to keep building.”

The win came with a milestone as Jonathan Osorio played his 250th match for TFC. The midfielder joined Toronto back in 2013 and is in his eighth season with the club. He has scored a total of 41 goals and has played a major role in midfield.

“Jonathan, over the course of the 250 games, is in many ways the epitome of our team and the organization,” Vanney said. “He is the guy who grew up in Toronto and just continued to grow as a player during my seven years here.

“He just continues to get better and better as a soccer player. His mind for the game, his work, everything he’s done, he continues to grow.

“He’s a guy who’s just passionate about the game. Every day he shows up to get better and to play at the highest level. I think he’s the guiding light for all Canadian players in terms of the pathway, the work rate, what it takes to get there, stay there and to make a difference.”

Friday evening had a completely different feel to the game for Toronto FC. This past Tuesday, the Impact became the first Canadian pro team to play in front of fans since March. Their home opener had 250 fans in attendance and if properly executed, it will surely lead the way to increase attendance and provide other clubs around the league a common working ground that Montreal has put in place.

Aside from Pozuelo’s early goal in the second half, TFC dominated the game with 60% possession and six shots to Montreal’s four.

Montreal struggled to get any rhythm and the absence of Saphir Taider was evident as they missed his ability to create chances. Toronto were also missing key players such as Richie Laryea, Jozy Altidore and Ayo Akinola.

Patrick Mullins started the match up front and had the opportunity to prove himself to Vanney. The forward unfortunately picked up an injury early in the game and forced the TFC coach to change his tactics. The absence of Altidore and Akinola and the injury to Mullins saw Vanney bring on Nick DeLeon, as he didn’t have a striker to bring off the bench. The midfielder did a great job in the number nine position.

Montreal thought they had equalized the match late in the game through Romell Quioto, but the goal was disallowed as TFC full-back Auro had done a good job of pushing forward and playing Quioto offside.

The win put Toronto one step closer to the finals of the 2020 Canadian Championship.