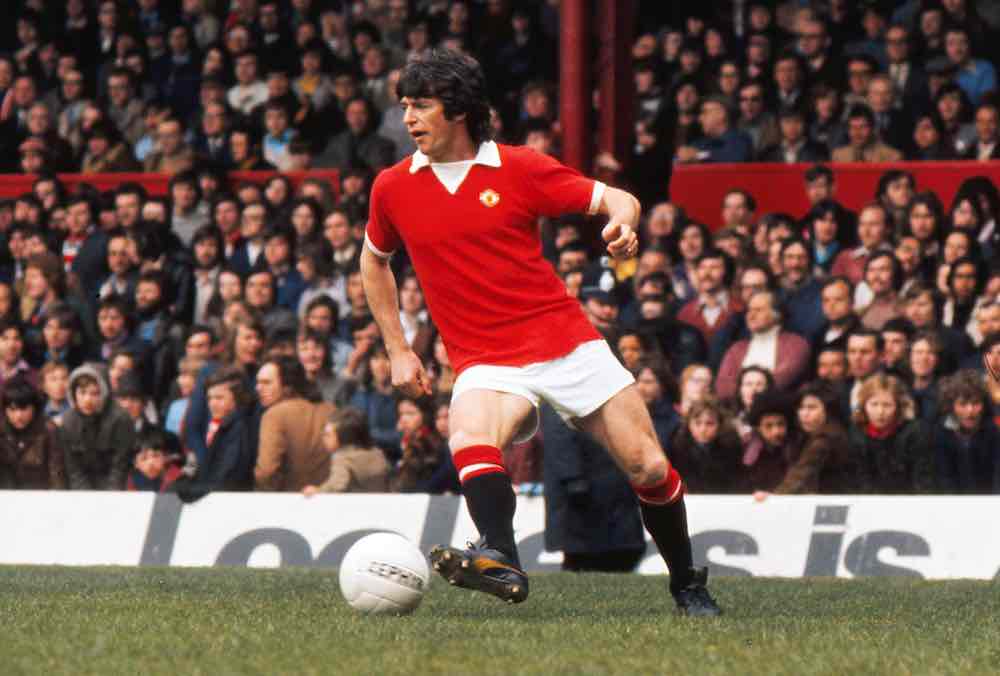 You retired in 1981. How have you been enjoying football retirement and how do you feel that the game has changed from when you played to the game played in the current day?

“I did not actually retire. I just stopped playing and I had spent the last four summers when I was still playing commuting to the United States.

“I returned to the UK I had the choice to go to Leeds United or Manchester City, and I decided that I was tired I had spent four years playing non-stop In my late thirties. I did not retire I decided to stop playing and then after that, I spent most of my time playing golf. I love playing golf.

“The game has changed dramatically from my time and my era. In my era, we had managers and people with great talent. Now the game is run by coaches so it is just completely different. It is a little bit more robotic and they appear to have taken 95% of the individually out of the game.

“Years ago you could put all players out there and now they go backwards, sideways and it is not the same attacking football that my era played.

“I do not watch too much football these days. If FC Barcelona is on I will watch them because I love Lionel Messi.

“Other than that I do not really watch much football, and occasionally I will watch on the television to catch up and see what is happening.

“The money that the players get, and good luck to them, the pitches and the equipment they use to what we played on, as we played on mud heaps, and it is a different game. I would love to play on the current pitches I must say.”

You played seven seasons for Manchester United making many appearances for the club. How do you look back on representing Manchester United and what are your highlights and memories from your time at the club? 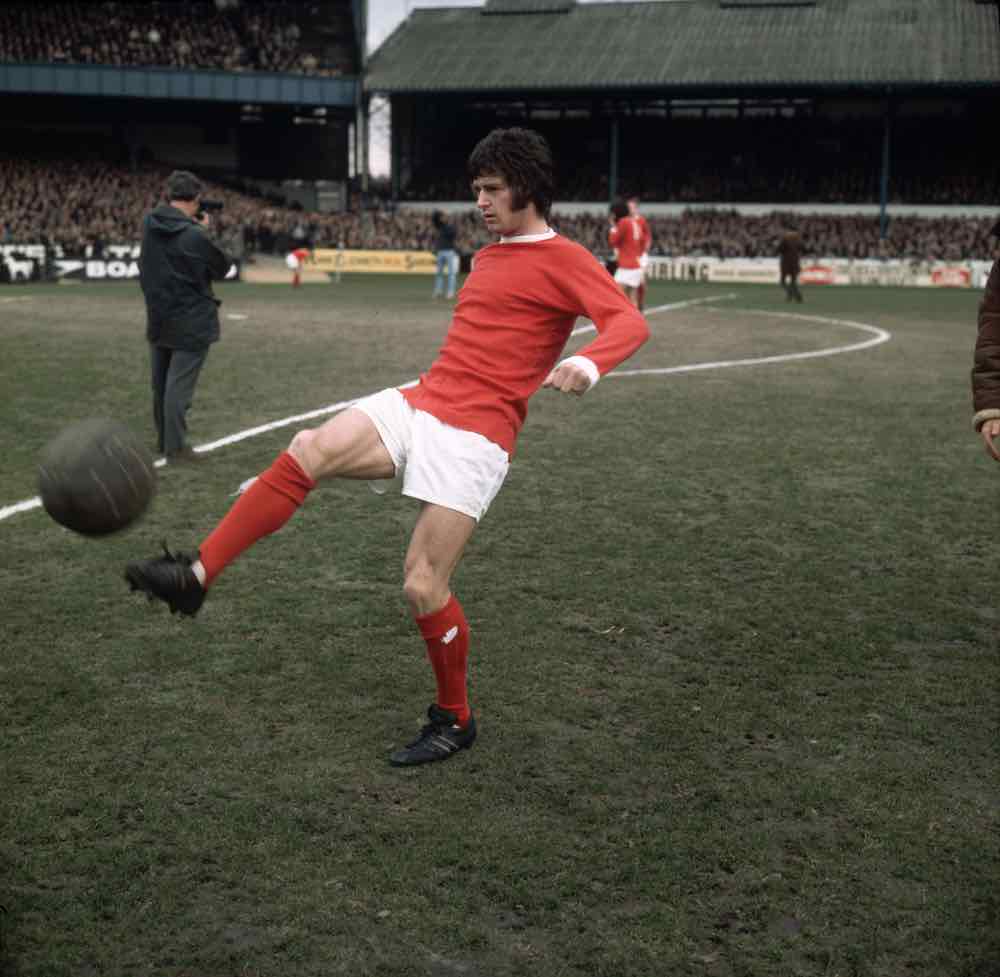 “Obviously to be at Manchester United was fantastic. To play for the biggest club in the country, and I was very proud to have Sir Matt Busby pay a record fee for me at the time, and It was a wonderful time.

“I was actually heading to Leeds United to play under Don Revie, and at the last minute, I went to Old Trafford. I have said many times that I joined the right club but the wrong team at the time. Manchester United has just won the European Cup and half that team were getting ready for retirement and Leeds United were the up and coming team, but I have no regrets.

“It was a wonderful time and once you to come to Manchester you can’t get rid of us. In my era 99% of the players came from poor families and we got paid to kick a piece of leather which was amazing.

“We were just happy to play football and get paid for it and things just happened, whereas clubs now are taking players and coaching them from 4 years old. I have had life James and I am very fortunate and I still play good golf!”

How do you look back on representing Scotland, and what are your highlights and memories?

“To play for Scotland was fantastic, and we qualified for the 1974 World Cup in Germany for the first time in about 40 years. That night we qualified at Hampden Park when we beat Czechoslovakia, and going on to play in a World Cup, was very special to pull on the blue shirt.

“They were great times and I was fortunate to play in a very good Scotland team. I think we were the only country in history to be eliminated from the World Cup without losing a game. We should have beaten Brazil and we should have beaten Yugoslavia and we drew with both, but I have great memories.”

You mentioned playing with some great players at Manchester United. Taking that into account and your career at international level, could you say who were among the best players you played alongside?

“I have said many times that the best player I ever played alongside, and I know it is not what people want to hear, was a guy called Brian O’Neil at Burnley. He was a right-half and he fed me all day long, and that is when the early days at Burnley where we had wonderful teams.

“To go on and eventually play with Paddy Crerand, Bobby Charlton, George Best, Dennis Law, Tony Dunne and Alex Stepney who was a great goalkeeper. We had wonderful players, and to go on to play against some wonderful players who were around in those days, it was a great experience.

“Just playing at Old Trafford and just walking out before the game started with an atmosphere that was phenomenal, and to this day the supporters give excellent support to people like me.” 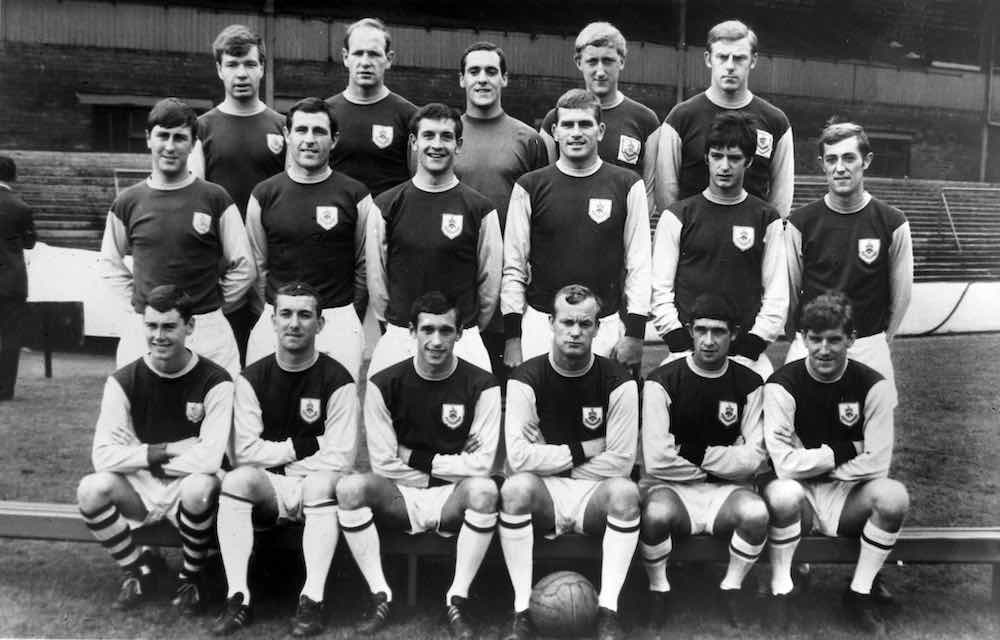 I can imagine as a winger with a great reputation you came up against some difficult opponents through the years. When you look back on your career, could you say which opponents stood out for you?

“I came up against many good opponents in my time. It was one on one with the full-backs, back in my day, and in the early days, full-backs were slow, but of all of the great full-backs I played against, Tony Dunne and Ray Wilson were the first of the small full-backs to be quicker, they were very difficult to play against.

“I first played against Ray Wilson when he played for Huddersfield Town and we drew them in the FA Cup. He was the left-back at the time and I gave him a roasting, and then he went on to join Everton FC and be part of the 1966 England World Cup winning team. A great full-back and both he and Tony and were great players.

“Then outfield players such as Jimmy Greaves, Dave Mackay, and the greatest of all Pelé. I played against Pelé and he was just in a world of his own. I also think about players such as Norman Hunter, Tommy Smith — the hardmen. It was great times and great memories that I have.”

Finally, Willie, when you look back could you say who were the managers that meant a lot to you and played a key role in your development as a professional footballer?

“Well, I joined Burnley FC when I was 15 and there was a guy called Harry Potts who was a great manager. Burnley were a great team — English Champions don’t forget — and every player had a talent regardless of position. The manager did not influence you by telling you how to play or what to do.

“I made my debut when I had just turned 18 years old, which was very unusual, in 1963 in a midweek game against Sheffield Wednesday at Hillsborough. They had a full back named Don Megson — his son Gary went on to play for Norwich and manage West Bromwich Albion and Don and I became friends, he was a really lovely guy. I had a great game and that was the start of my career.

“When I went to Bolton Wanderers, Ian Greaves who was a superb manager. They were managers and they picked a team to go out and play, they did not come up with a plan they just went out and played.

“Sir Matt Busby was the best manager to ever grace the game in my opinion. He was a very special human being. He built one of the great club teams and it was like playing for your Dad. He commanded the utmost respect without saying anything, and he was such a lovely guy.

“I remember if we would lose a game he would say” ‘you did your best, have a nice weekend,’ and it made you feel a thousand times worse because you did not want to let him down. You wanted to play well so that he would be proud of you.

“We played a lot of golf together for many years afterwards and our families also got on well with each other. We would holiday together in Tenerife and stay on the same complex in Los Cristianos on the Costa Del Sol.

“I remember we played golf at a course called The Mere where he got his only ever hole in one at the 12th hole, and I have a photograph of him being presented with his tie, as you receive a tie to mark the achievement.

“When I went to Blackpool FC, my two best friends in football were Alan Ball and Jim McCalliog and when Ballie got the job at Blackpool he convinced me that it was a great idea to go there and it wasn’t. Both were great players and great guys.”