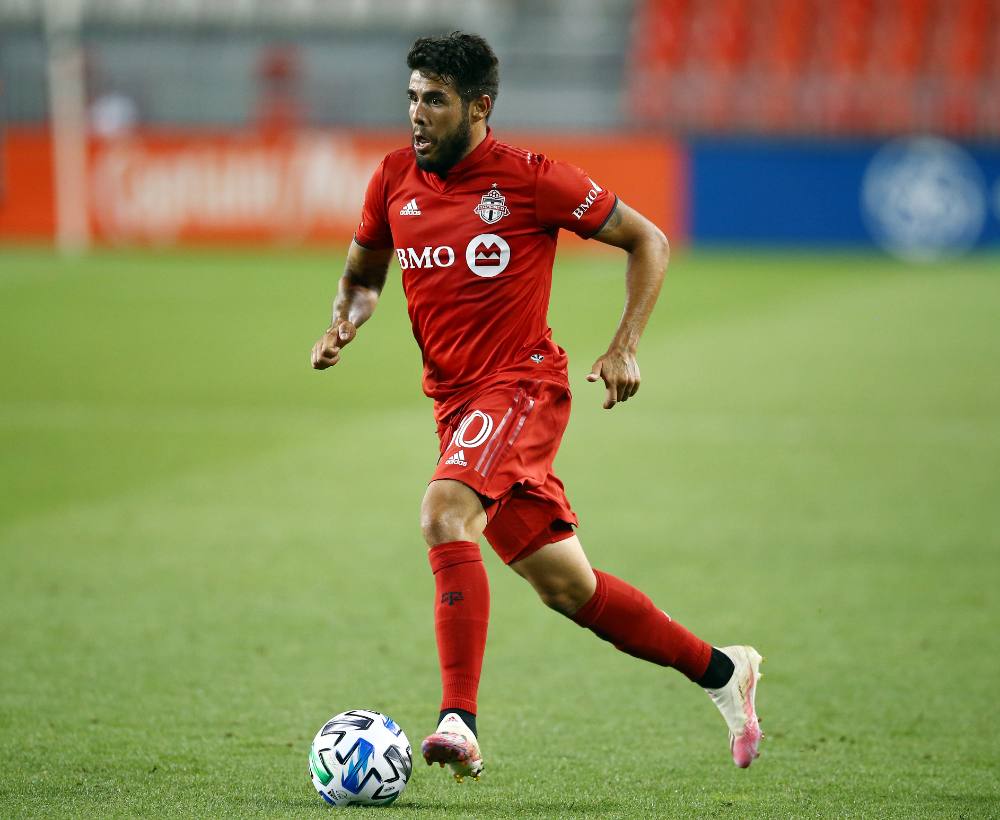 It was a rare poor performance from Toronto FC, who struggled at both ends of the pitch on Tuesday night during their 1-0 defeat to Montreal Impact.

Rudy Camacho’s early goal in the first half from a Romell Quioto cross was the decisive moment in a 1-0 win for Montreal. The loss for Toronto put an end to their 18-game unbeaten streak as well as inflicting a first defeat in Major League Soccer this season.

Toronto’s unbeaten streak has been an impressive run which dates back to August 2019 and has seen the club achieve many great results. They were one game short of tying the 19-game MLS regular-season unbeaten record, jointly held by FC Dallas (2010) and Columbus Crew (2004-05).

Fans may be disappointed at missing out on such a prestigious record, yet it’s something manager Greg Vanney hasn’t put much thought into, instead focusing on game-to-game results in what has been a challenging time for all associated with MLS.

“We honestly haven’t talked about it even once. For us, it’s just trying to get a result each game,” Vanney said of the club’s unbeaten run.

“There are so many different things going on right now between the world and these games. There are regular-season games, Canadian Championship games, there are a lot of things going on.

“We don’t need to pile on more things like records and stuff like that. We just need to focus on performing and winning a game.”

It was arguably Montreal’s best performance under Thierry Henry so far this season. His side were ready from the start of the match as Quioto put in a superb performance, decisive in his actions and making strong runs toward goal. He had a brilliant chance in the first half to extend the lead to 2-0, timing his run to perfection to get through the TFC defence and create a clear chance on goal. Chris Mavinga used his speed to get back into position, block his shot and prevent a scoring opportunity.

Aside from Montreal being very clinical in the final third, their defence made it difficult for Toronto throughout the evening. Luis Binks made his presence known throughout the match as he made timely challenges, was very physical, read the game very well and limited TFC’s chances in the box. He finished the match with four clearances, one interception and one blocked shot.

This will be a performance which Toronto will want to put behind them. The home side had total dominance of possession (62%-38%) but were unable to make it count in the final third. TFC came close to tying the game at the end of the first half when they were awarded a penalty, but squandered the chance in comical fashion.

In a throwback to something Henry tried with Robert Pires during his playing days with Arsenal, Alejandro Pozuelo elected to put a touch on the ball with Pablo Piatti making his run into the box and finding the back of the net. However, the goal was chalked off as Piatti encroached into the box and Montreal were given a free-kick.

It’s a win in Toronto!

Pozuelo had previously been very reliable from the spot prior to Tuesday night, but this was a decision that backfired on the midfielder with the match still in the balance. Vanney was left baffled after the match.

“I’m not sure what was going on with the penalty kick,” he responded when asked about the incident.

“We’re down a goal, we should just be burying the ball into the back of the net and move on. We gift them the fact that they don’t even have to make a save or do anything on the penalty kick.”

Jozy Altidore put in a hard-fought effort for TFC but is yet to score this season. He had two quality chances in the first half, losing his markers with well-timed runs, yet Clément Diop was positioned well and stopped the striker from finding the back of the net. The forward was subbed off late in the game and showed frustration, yet Vanney says Altidore just wants to help his team win in every possible way.

“He was a little animated. He’s a striker and didn’t really want to come off,” Vanney said.

“At the end of the day, he hasn’t played many minutes and he hasn’t been through many training sessions, even in the last week and with everything going on.

“I felt like I got more minutes out of him than I thought I was even anticipating on the night. This one game is not more important than Jozy in being in our team and continuing in the next and the next game.”

Toronto will aim to put this loss behind them this Saturday when they face the Vancouver Whitecaps.

Loading...
Newer Post
Pity Martinez To Leave Atlanta United? What We Know So Far
Older Post
COVID And Football In Venezuela: How The Pandemic Showed The Emperors Were Never Clothed