Dominic Calvert-Lewin, 23, has been tearing it up in the Premier League so far this season and it hasn’t gone unnoticed by England manager Gareth Southgate.

The England boss has included the in-form striker in his latest squad alongside Bukayo Saka, 19, and Harvey Barnes, 22. 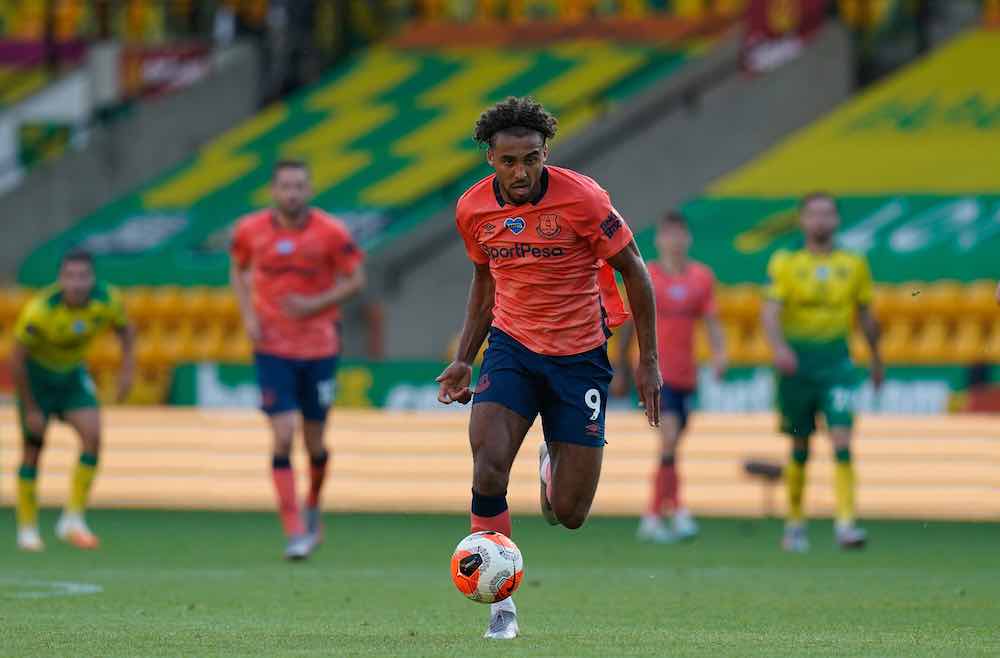 In an impressive breakout season in 2019/20, the Everton striker netted 15 goals in all competitions. He has continued his impressive form, banging in a total of eight goals in his first five appearances for Everton so far.

The Sheffield-born forward has manager Carlo Ancelotti to thank for his goal-scoring form. The Italian coach has been working hard with the young Englishman to improve his finishing, with a focus on one-touch finishes.

Calvert-Lewin netted his first career hat trick in a 5-2 victory over West Brom — all goals finished with one touch.

Ancelotti compared his current No. 9 to a striker he had coached previously — Fillipo Inzaghi.

“I had a fantastic striker in Inzaghi, who scored 300 goals and 210 with one touch,” Ancelotti said.

“A striker has to be focused in the box and I think Calvert-Lewin understands that really well because in the box he has speed, he jumps really high, he has power. Where he has improved more is there, in the box.”

After starting the new season at a blistering pace Calvert-Lewin is spearheading the Everton attack. With the acquisition of Colombian superstar James Rodriguez, who is providing the guile and technique previously lacking at Goodison Park, more goals are sure to follow.

Calvert-Lewin will want to bring his club form straight into the England fold. Having previously played 17 times for the under-21 squad, scoring 7 goals, the Everton man will be hoping he can step up and deliver for Southgate’s side.

Next summer’s European Championships, which is essentially a home tournament for England, will be in the back of every England player’s mind. The Everton striker is no different as he looks to challenge England captain Harry Kane for the spot leading the line.

Saka, Barnes And A 30-Man Squad

Southgate has selected a 30-man squad ahead of games against Wales, Belgium and Denmark, but the Three Lions’ head honcho is hopeful of giving all players some playing time.

“We would be looking at pretty much all of the squad getting game time ideally,” Southgate said. “We want to see players, we want to learn things from the matches.”

His comments will go a long way to boost the chances of full debuts for Calvert-Lewin, Saka and Barnes.

The inclusion of Arsenal’s Saka as a defender suggests Southgate will take another look at the 3-4-3 formation, a tactic that served him well as England battled through to the semi-finals at the 2018 World Cup in Russia.

Saka has been playing mainly as an attacking left winger more recently, but played many times at left-back and left wing-back under Mikel Arteta last season.

His ability to adapt to different roles will serve him well in his first England squad. The young London born winger will want to get game time regardless of the position in which he is used.

Southgate’s side has struggled to find a left-sided defender of late and with Ben Chilwell returning from injury, Saka will likely compete with teammate Ainsley Maitland-Niles for the reserve left-back role, after Kieran Trippier was used out of position there in England’s last two games.

Leicester City midfielder Barnes has also earned himself a first call up to the England senior squad after an impressive start at the King Power Stadium.

Harvey Barnes – Worth A Shot For England

Barnes has looked sharp on the left side of midfield, creating and scoring chances for Brendan Rogers’ side as the Foxes unbeaten start to the season continues.

The Burnley born midfielder can play in several positions but his strongest lies in an attacking midfield role drifting in from the left.

His chances of dislodging Raheem Sterling in England’s front three is not likely to happen anytime soon but he could be used on the left of a midfield three, adding some creativity to the England engine room that has lacked imagination in recent times and could be an alternative to the tried and tested.

The squad has also seen a return for Manchester United captain Harry Maguire and both Jack Grealish and Kalvin Phillips retain their places.

Mason Greenwood and Phil Foden have been left out following their breach of discipline in Iceland as Southgate wants to “send a message” to all players at every age group – their behaviour just isn’t how an England player should behave and the talented duo will have to learn their lesson quickly if they want to get back into Southgate’s team.

England face Wales in a friendly on October 8th before facing Belgium and Denmark in the Nations League on October 11th and 14th respectively.