Cerro Porteño Start Life Without Churín With A Draw At Guaraní 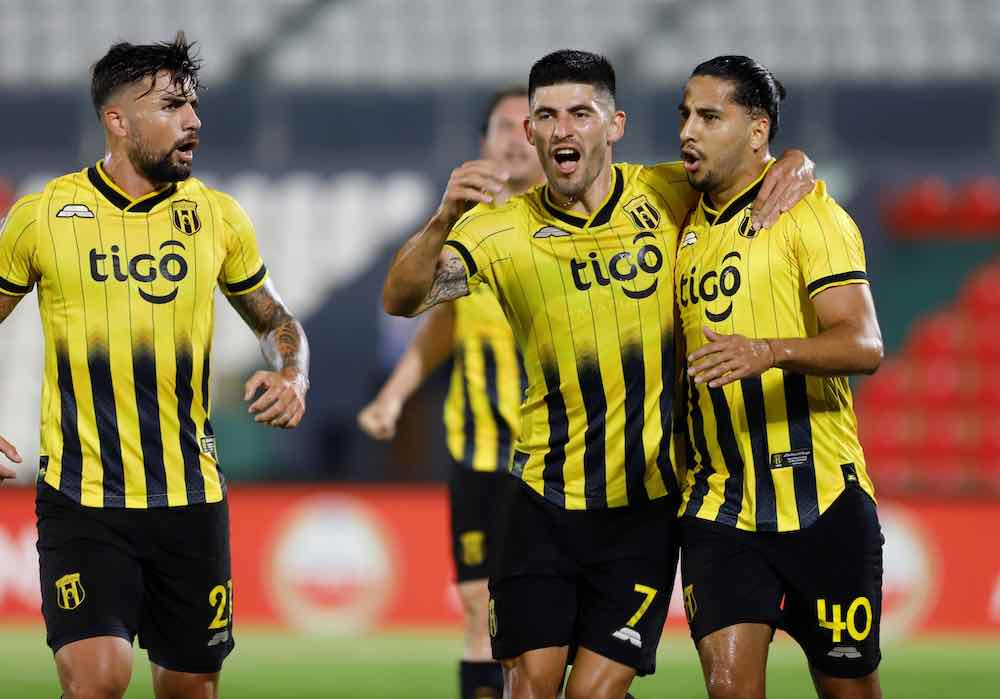 Last night Guaraní hosted Apertura champions Cerro Porteño in the second round of fixtures of the Paraguayan Clausura.

In Guaraní’s opening league game they suffered a 1-0 loss to Sol de América, so the match against Cerro offered them a swift shot at redemption.

Cerro Porteño, on the other hand, went into the game full of confidence after an opening day win over Sportivo Luqueño. However, this was to be the first outing for El Ciclón without their cult hero Diego Churín, who completed his move to Brazilian side Grêmio a few hours before kick-off.

At the Estadio Rogelio Livieres in Asunción, it was Cerro who had the first chance of the game. This fell to Ángel Lucena, who blazed his effort not only over the bar, but also over the stadium fencing.

In the 17th minute, Mathías Villasanti had a great chance to put Cerro ahead, but his volley was off-target — he will surely feel he would do far better if he could have another bite at the cherry.

One thing evident throughout the opening stages was Cerro’s ability to create chances from out wide. Their persistence with these endeavours paid off midway through the half when a wonderful low cut-back from Enzo Giménez found Lucena, whose shot was powerful enough to beat Gaspar Servio.

Just before the half-time break, the away side thought they should have had a penalty when Giménez was nudged by Guillermo Benítez in the box, but the officials both on the field and in the VAR room saw it differently.

In the second half, it was Cerro who created the first effort as they sought to double their lead. Giménez picked out Claudio Aquino to force an early test for Servio, which the goalkeeper passed with flying colours.

It took a set-piece from out wide for Guaraní to create their first chance after the restart. The ball into the area was dealt with poorly by the Cerro defence, leaving Cecilio Domínguez with a clear sight at goal, but he could only direct his effort into the side-netting.

Domínguez, who is off to play in the MLS next year, redeemed himself in the 65th minute after Guaraní were awarded a free-kick on the edge of the box. His cheeky one-step strike was enough to catch out Miguel Martínez, thus levelling the proceedings.

El Ciclón brought on José Ortigoza, who almost made an instant impact when Aquino teed him up, but his well-struck effort went straight at Servio, who didn’t have to move a muscle to save it.

As the minutes ticked by, Cerro continued to probe the goal of the Aurinegros, but couldn’t find a way through. At one point, Giménez fired wide and was subsequently thankful to see that the offside flag was up, as he had been presented with an open net to aim at.

Similar to the end of the first half, prior to the referee’s final whistle there was a VAR check — this time for a confrontation following a Guaraní corner. However, after a lengthy review — one that probably felt like an eternity for Cerro fans watching at home — the panel decided against awarding Guaraní a spot-kick.

“It’s hard to say ‘we deserved to win’ because we didn’t make the most of [the game] and that in itself is a deficiency,” he said.

“It was a great game, a well fought encounter worthy of two very good teams,” he added.

His counterpart Gustavo Costas gave a perspective from the Guaraní camp — it’s safe to say he wasn’t happy with the playing surface.

“For me, it was a good game, very intense. Unfortunately, our pitch was not in good condition,” he stated.

“This game should have been played on a pitch in better condition. They are two teams with very good intensity. The field hurt them as it hurt us.

“It was a very tough game. They started better than us; they were beating us in the middle, then we matched them. Pity that the field was as it was — on a beautiful pitch it would have been a great game.”

The result means that after just two games it’s Sol de América who lead the 12-team Clausura table, with Cerro in third and Guaraní sitting winless in tenth.

Next up, Cerro host Libertad in another tasty-looking fixture and Guarani face a short trip to fellow Asunción-based outfit River Plate, where they will be hoping to avoid going three games without a win.